This Sonoro Gold Corp profile is part of a paid investor education campaign.*

“We not only have all the essential components to make a company successful, i.e., the people, the property and the ownership, but we have a very clear business plan of how to take this company forward, which is to move to production as quickly as we can, as professionally as we can, in order to generate cash flow. From cash flow, we can continue to expand the company,” commented Sonoro chairman & director John M. Darch.

In January 2018, the company’s wholly-owned Mexican subsidiary, Minera Mar De Plata, S.A. de C.V., entered into the first of five option agreements to acquire a 100 percent interest in Cerro Caliche’s mineral concessions and historical data. This agreement combines past data with results from Sonoro’s current exploration activities, now totaling 47,500 meters of drilling and more than 9.000 soil and rock samples. Comprehensive exploration has confirmed the existence of a broadly mineralized low-sulfidation, epithermal vein system, which could develop into a large tonnage resource suitable for open-pit mining.

In April 2021, the company announced the closing of its oversubscribed non-brokered private placement of 17,283,586 units at US$0.18 per unit for total gross proceeds of US$3,111,045. Sonoro intends to apply the net proceeds from the offering towards the development of its flagship Cerro Caliche project, including funding of its metallurgical testing, preparation of a 43-101 resource update and PEA, in addition to property maintenance payments.

As a junior mining company, Sonoro boasts an attractive capital structure and robust shareholder profile. The company’s market cap currently stands at US$17 million and the number of fully diluted shares stands at 131.39 million. 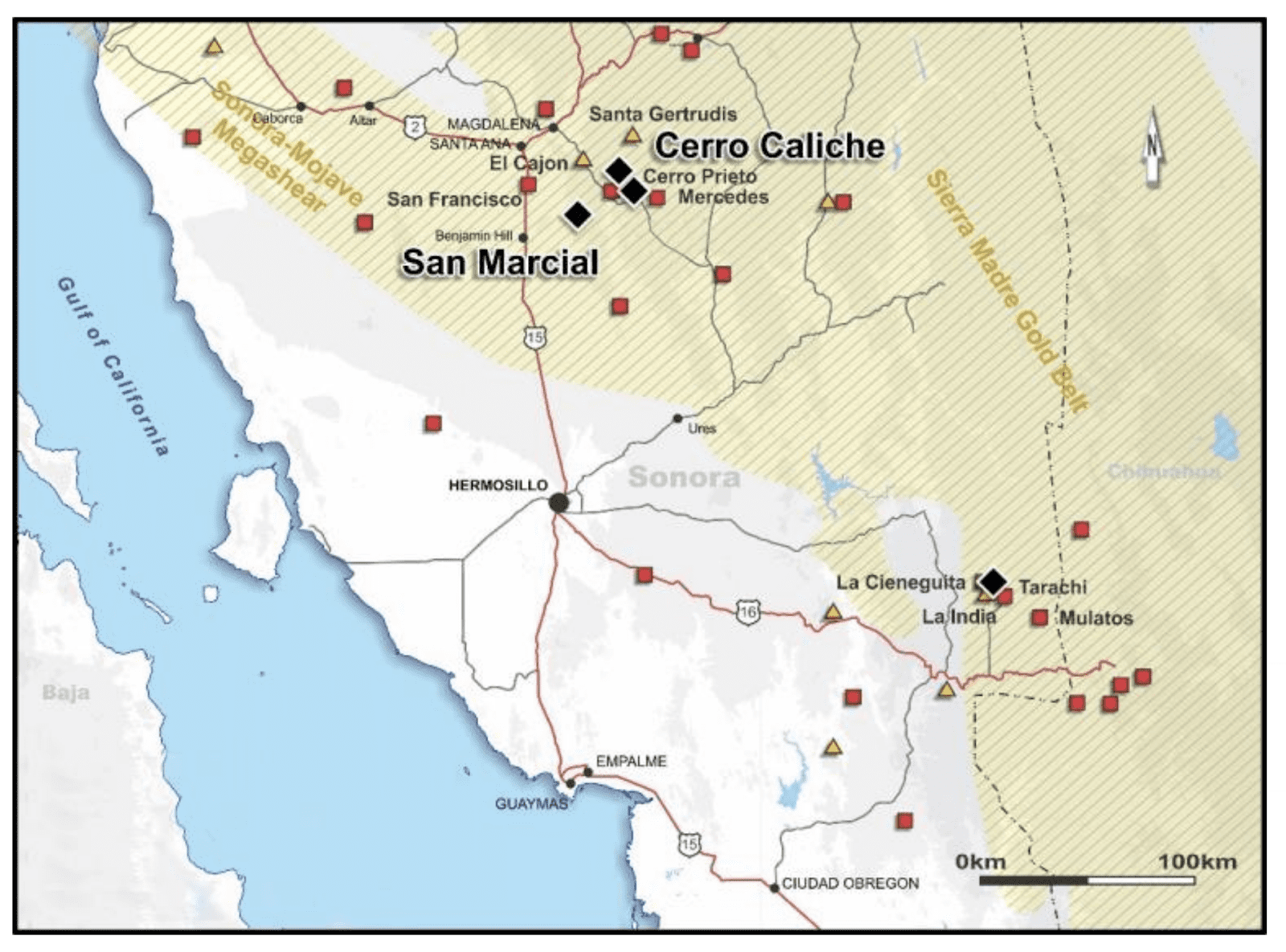 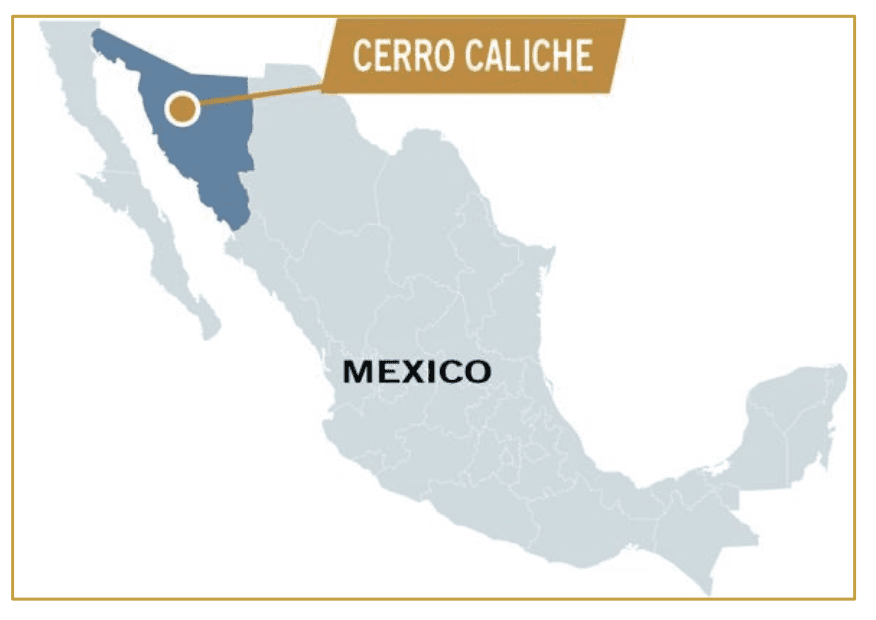 Since project acquisition, Sonoro Gold has been quick to begin metallurgical testing, PEA and 43-101 resource reporting and an extensive 433 hole drilling program across 47,500 meters. It has already identified 18 gold mineralized targets with an additional four major mineralized zones with higher-grade gold discovery potential. 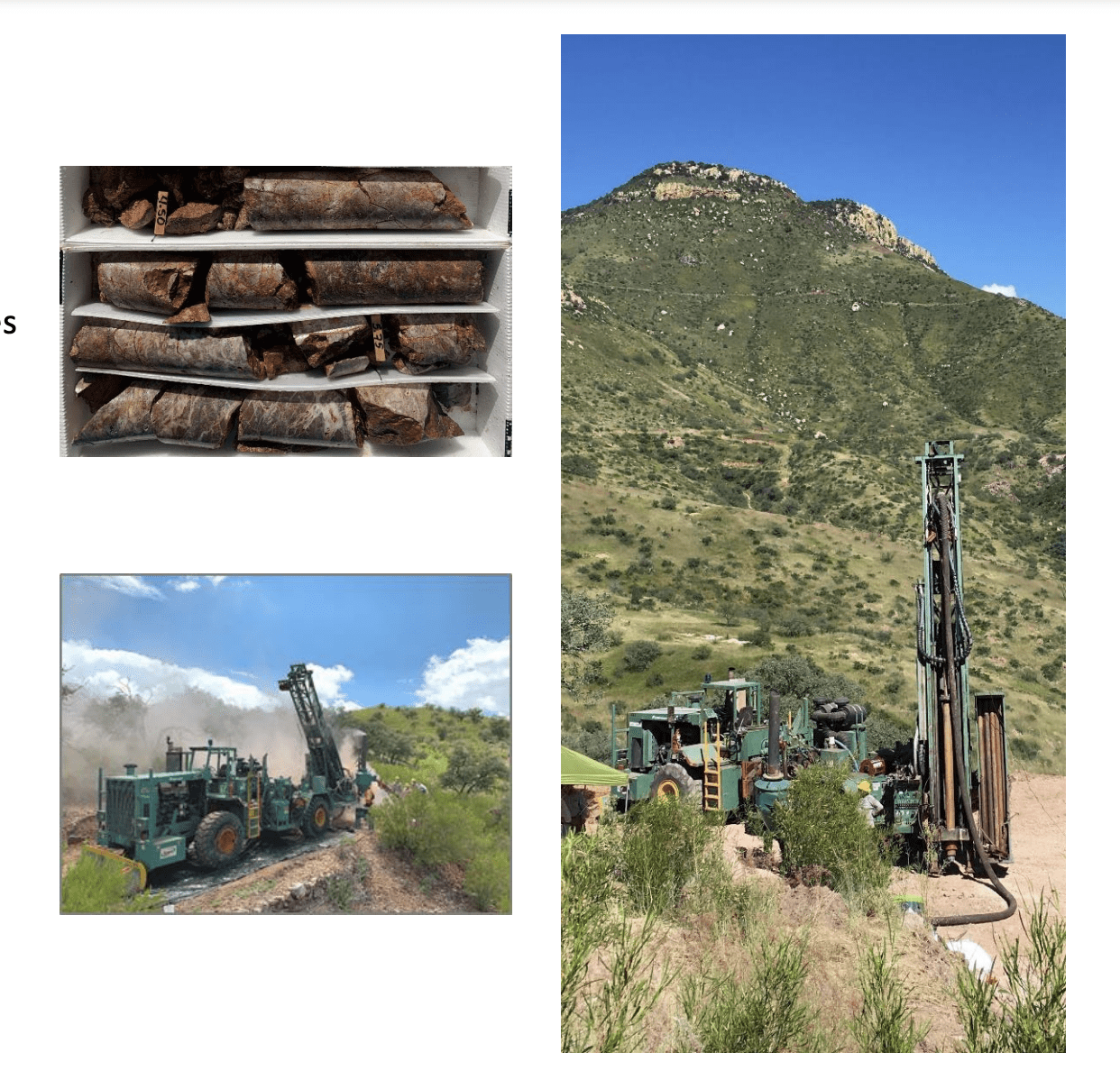 Potential resource estimates for the property hover between 75 million and 100 million tonnes with a 0.3 to 0.5 g/t average gold grades and bottle roll testing demonstrating an average of 80.3 percent gold recovery. The Cerro Caliche gold project is on course to near-term production with the development of a heap-leach mining operation and mine development plan.

The San Marcial property is located in the northern region of Sonora state, Mexico and leverages strategic positioning 20 kilometers east of the San Francisco mine, owned and operated by Magna Gold Inc. The property boasts excellent road access and infrastructure with locally high-grade gold and silver mineralization. Sonoro Gold Corp. owns 100 percent of over 1000 hectares of the property.

Previous work on the asset includes air track drilling and old mine development dating back to the early 1900s. The historic mine workings at Soledad and San Marcial mines demonstrate exceptional discovery potential with the presence of broader low-grade zones of disseminated-to-stockwork forms of mineralization. The property’s geological profile consists mainly of Jurassic sedimentary rocks, consisting of quartzite, shale, limestone and younger porphyritic intrusive rocks.

John M Darch brings over 35-years of experience in the financing and management of natural resource-related projects in both the public and private sectors. In 1981, he co-founded the Vancouver-based Crew Group of Companies which created various natural resources companies including gold, diamonds, geothermal, coal, antimony, nickel and copper, tin and potash. Darch has successfully secured over US$300 million in private and public funds from North America, UK and Europe, through listings on the Stock Exchanges in Canada, USA, UK, Germany, Norway and South Africa.

Kenneth MacLeod has 35 years of experience as an entrepreneur, financier and executive officer in the resource and energy sectors, having served as the president, CEO and director of various public and private companies operating in the Americas, Asia and Africa. He served as president & CEO of Kakanda Development Corp. from 1994 until 2001 and for Western GeoPower Corp. from 2001 until its acquisition by Ram Power Corp. in 2009. MacLeod also launched and recently sold a private, successful Renewable Energy company currently operating in the Philippines.

Melvin Herdrick is a professional geologist and a member of the SME-AIME professional mining organization. He has over 35 years of experience in mineral exploration in the US and Mexico. He has been involved in the successful discovery and re-evaluation of six economically viable deposits, with three in production and one in pre-production. He has extensive experience exploring gold, silver and copper deposits, uranium, iron, and nickel resource evaluations.

Herdrick has spent the past 20 years focused on discovering and developing gold and silver mineralized deposits in Northern Mexico. He is currently overseeing exploration at Sonoro’s Cerro Caliche deposit, where he recently identified a cluster of eight northwest-trending gold-dominant structures surrounded by parallel sheeted veinlets and stockwork veinlets. Herdrick also performed surface and underground sampling of the main mineralized shear vein at the company’s former Chipriona concession, which led to the project’s acquisition by Agnico Eagle Mines in 2016. From 2006, he served as VP of Exploration for Pediment Gold Corp. until its takeover by Argonaut Gold in 2011. During this time, he discovered the two-million-ounce Los Planes deposit at the San Antonio gold project in Baja California Sur and discovered one-million ounces of gold with significant silver at the formerly closed La Colorado mine, which is now back in operation.

From 1994 until 2002, Herdrick served as chief geologist for Phelps Dodge Mexico. He was the exploration geologist at the Morenci and Tyrone open-pit copper mines. He was involved in exploring and discovering multiple deposits, including the La Florida-Barrigon and Piedras Verdes copper deposits. Herdrick also served as the senior exploration geologist at Kennecott Copper, where he was part of the discovery team for the Vermillion River deposit and the Spar Lake deposit, now the Troy copper-and-silver underground mine.

Jorge Diaz is a professional mining engineer with over 25 years of experience developing and constructing gold and copeer mines in Sonora, Mexico. He is also the founder of Interminera, S.A de C.V., a mining consulting, engineering design and construction service company based in Sonora, Mexico. In 2011, Diaz began exploring a gold property in Quiriego, Sonora bringing it to production in 2016 as a small-size open pit gold producer.

Curtis Turner has over 15 years of experience in business and finance, including mergers and acquisitions, public reporting and operations, as well as community and government relations. He is currently the CFO for Rawhide Mining LLC, a producing heap-leach gold mine in Nevada, majority-owned by Coral Reef Capital, a private investment firm. Previously, Turner was the CEO and director of Candelaria Mining Corp. and held a senior management position at Argonaut Gold Inc., where he was a vital member of the team that completed four acquisitions totaling over $700 million. Before his position at Argonaut Gold, Turner was CFO at sodium cyanide manufacturer Cyanco International LLC., director of Finance at Yamana Gold Inc. and corporate controller at Meridian Gold Inc.

Stephen Kenwood has over 20 years of experience in the global mining sector, including 12 years in the management of junior exploration companies. He worked as a geologist with Cominco Ltd. on the Snip gold mine and as a project geologist on Eskay Creek’s polymetallic massive sulfide deposit. He also worked as a geologist at the Petaquilla copper-gold porphyry deposit in Panama.

Salil Dhaumya previously served as the CFO, principal accounting officer and secretary of Pan American Goldfields Ltd. He also served as a controller and general manager of Aquilini Investment Group, a private real estate development company. Dhaumya earned a Bachelor of Commerce (Honours) Degree from Panjab University, India, in 1985 and obtained a certified management accountant designation in British Columbia in 2004.

Neil Maedel is a Southeast Asia-based venture capitalist with an extensive background in the analysis and finance of small-cap companies beginning with The Minicap Analyst in 1988 and later Protrader Finanz AG, which were based in Switzerland and associated with numerous highly successful start-ups in North America. Maedel was the director of Business Development at Switzerland-based Manas Petroleum when it assembled a 5-country portfolio of large light oil prospects, ranging from high-risk exploration to discovery appraisal.

Maedal was also chairman of Pan American Goldfields, directing the executive team which turned around the troubled company, doubling its interest in its principal asset to 80 percent, while more than doubling the size of the resource from 800,000 to 2,000,000 AuEq ounces, as defined in a NI 43-101 compliant Preliminary Economic Assessment (PEA). In 2014, Maedel co-founded Kenadyr Resources, which is currently drilling to define high-grade gold zones now demonstrated to extend from ZiJin Mining’s TBL mine in the Kyrgyz Republic.

Katharine Regan has over 25 years of experience in generating Business Development Programs across multiple industries in both the private and public sectors. Her particular expertise is in project development, administrative operations and corporate communications. As an independent consultant, Regan also assists companies in implementing and maintaining corporate governance, regulatory compliance and corporate social responsibility.

James Taylor spent over 35 years as an investment advisor with several firms, including Canaccord Investment Corp and Yorkton Securities from 1980 to 2011; Richardson GMP from 2011 to 2014; and Dundee Goodman from 2014 to 2016. During his employment as an investment advisor, he participated in the financing of numerous exploration and venture companies that grew to success as significant mineral producers. Taylor also serves as a director at Auston Capital and Captiva Verde Land Corp.

The information contained here is for information purposes only and is not to be construed as an offer or solicitation for the sale or purchase of securities. Readers should conduct their own research for all information publicly available concerning the company. Prior to making any investment decision, it is recommended that readers consult directly with Sonoro Gold Corp and seek advice from a qualified investment advisor.