Prospective for Lithium in Clayton Valley

This Sienna Resources profile is part of a paid investor education campaign.*

Sienna Resources (TSXV:SIE,OTC Pink:SNNAF) is an exploration and development company targeting high-grade deposits in politically stable, environmentally responsible and ethical mining jurisdictions. The company owns a trio of properties with exposure to the emerging battery metals market, including the Slättberg Project in Sweden, the Clayton Valley lithium project in Nevada and the Marathon North palladium project in Ontario.

Slättberg is located 25 kilometers northwest of Falun, Sweden. Slättberg is a historic mining camp hosting platinum-palladium-nickel-copper-cobalt rich massive sulfide mineralization that occurs within a two-kilometer belt of historic nickel-copper mines. The project contains drill defined massive sulfide mineralization that extends to around 100 meters in depth, and remains open for expansion at depth and along strike. The project is accessible year-round, with nearby rail, power and five smelters in the Nordic region. At least 16 historic mines are located on the property, with historic operations dating back to the late 1800s. 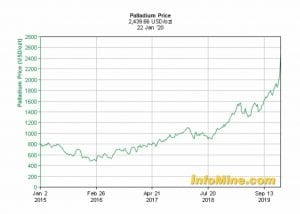 Mineralization at Slättberg is hosted by 1.8-1.9 Ga (Svecofennian) supracrustal rocks (metavolcanics and metasediments) located along the southwestern flank of a large gabbroic intrusive complex. The historic mines are positioned along an east-west trend of massive sulfide occurrences developed in and around a similarly oriented body of “leptite.” This is a local term used to describe rhyolitic/felsic tuffaceous rocks commonly associated with sulfide mineralization in Bergslagen. Mafic and ultramafic rocks also occur in and around the mine workings. 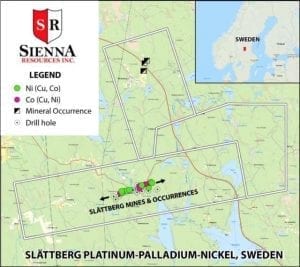 Sweden is at the forefront of an exploration and development boom in the mining industry. The country’s favorable business environment includes a low corporate income tax rate, a proactive geological survey, and broad public support for export-led resource extraction. Sweden has a long history of mining and is host to some of Europe’s largest active mines.

Northvolt is planning to be the largest battery factory in Europe at roughly the same size as Tesla’s Gigafactory. Sienna President, Jason Gigliotti, states “Northvolt wants to locally source as much battery material as possible such as cobalt and nickel. There are now more than 20 mega battery factories currently being planned or constructed globally, creating a massive demand on battery metals such as lithium, cobalt and nickel. Sienna is focused on exploring and developing projects that will meet this insatiable demand.”

Jason Gigliotti president of Sienna states, “We are very pleased to have the opportunity to have access to this project which lies within one of the top mining jurisdictions in the world with significant mining history. The infrastructure is as good as any drill target I have seen. There are paved roads within meters of planned drill targets and this prospect is accessible year-round. This platinum-palladium-nickel prospect houses 16 historic mines and we are optimistic about what new mining techniques could achieve. The results of the 2019 drill program were very encouraging as we intersected significant platinum & palladium. A follow-up drill program is currently being formulated and we look forward to a very active 2020.” 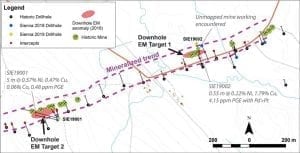 Sienna conducted a two-hole drill program in October 2019 at its Slättberg project in southern Sweden. That program targeted two electromagnetic (“EM”) anomalies detected by downhole surveys performed at the end of the 2018 drill program. One was detected in the vicinity of drill hole SIE-18-006 located at the west end of the trend of historic nickel mines, and one in the vicinity of drill hole SIE-18-003, near the center of the trend of mineralization.

Drill hole SIE-19-002 was drilled to test a strong EM response to the west of drill hole SIE-18-003 in the center of the trend of mineralization. Drill hole SIE-19-002 intersected a PGE-rich vein 0.55 meters wide (from 88.0 m to 88.55 m), averaging 0.22 percent nickel, 1.79 percent copper, and 4.15 ppm (4.15 g/t) PGE (4.05 g/t platinum vs 0.095 g/t palladium). Taking recent metal prices and assuming 100 percent recovery, the hole returned 4.66g/t palladium equivalent, 9.03g/t platinum equivalent, 4.44 percent copper equivalent, and 1.72 percent nickel equivalent. The unusual enrichment of PGE in this vein is notable and represents one of the highest values ever reported from the property. PGE contents seen in Sienna’s 2019 drill holes demonstrate strong PGE potential on the project. Drill hole SIE-19-002 also intersected unmapped mine workings at a depth of 70 meters. This demonstrates that nickel mineralization was mined at a larger scale than was indicated by historic records. 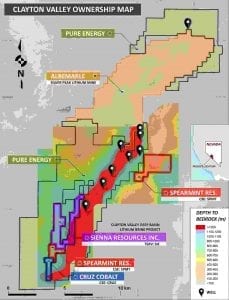 According to Jadon Gigliotti, President of Sienna Resources, the property in Clayton Valley offers a unique opportunity for the company to target quality lithium reserves. “We are pleased to be one of the few companies that have property within the only known lithium brine basin with production in North America. Saline brines are higher density than fresh or brackish water and therefore tend to sink. Based on this, management is optimistic regarding this project as we are located in the deeper sections of this basin.”

The Marathon North palladium property is located in northern Ontario, directly bordering Generation Mining Ltd.’s Marathon palladium project. The 2,500-acre property contains one of the largest undeveloped platinum group metal mineral resources in North America hosting several PGM-copper deposits, including the 7.1 million ounce palladium-equivalent Marathon Deposit. “We are extremely pleased to be able to acquire a large block of land directly bordering one of the largest palladium deposits in North America. This is an excellent complement to our platinum-palladium-nickel project in Sweden,” said Sienna President Jason Gigliotti.

Complementing its portfolio of Scandinavian properties, in September 2020 Sienna Resources announced it had entered into an option agreement with EMX Royalty Corporation (TSXV:EMX; NYSE:EMX) to acquire the Bleka and Vekselmyr gold projects in Norway. Each project hosts greenstone gold mineralization in the southern half of the country. The projects were acquired based on their rich geology and development potential, specifically Bleka, which includes historical gold production. 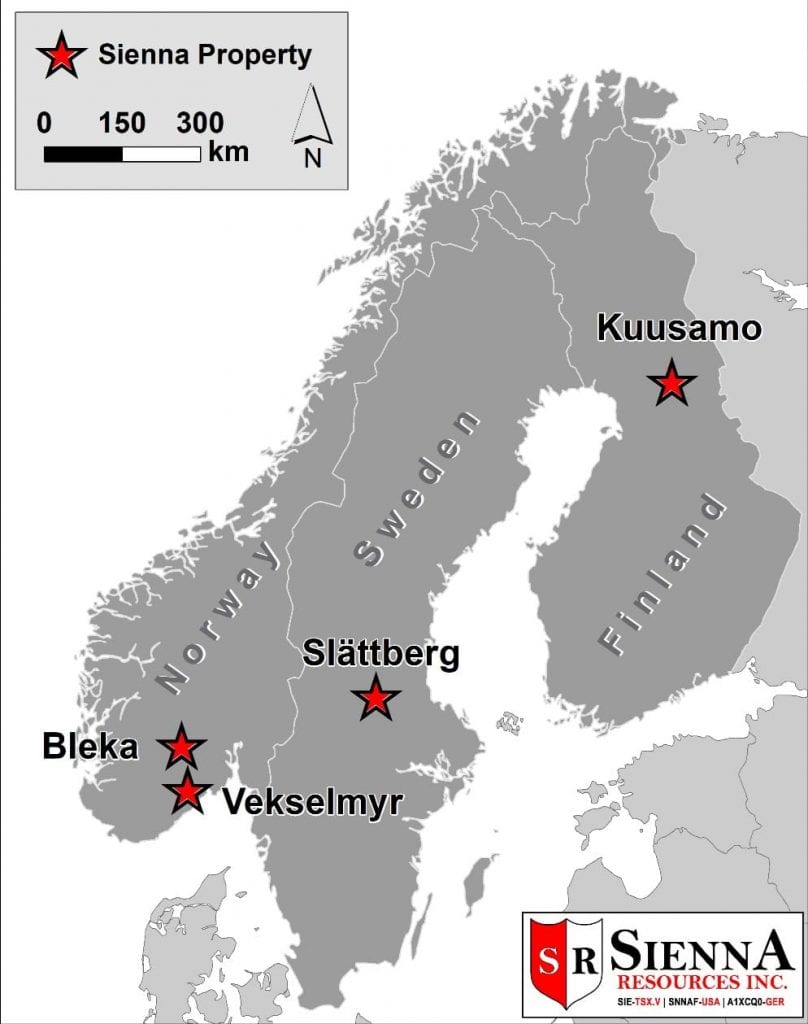 According to documentation acquired by Sienna Resources, the Vekselmyr gold project hosts outcroppings of gold mineralization in orogenic-style veins on the property. The Bleka Vein was discovered in 1880 and mined intermittently until 1940 with historical production including 165 kilograms of gold sourced from mineralized material with an average grade of 36 g/t gold. The Bleka project covers this historic mining area in addition to swarms of similar veins that extend for at least three kilometers along strike

The information contained here is for information purposes only and is not to be construed as an offer or solicitation for the sale or purchase of securities. Readers should conduct their own research for all information publicly available concerning the company. Prior to making any investment decision, it is recommended that readers consult directly with Sienna Resources and seek advice from a qualified investment advisor.

RETRANSMISSION: Sienna Makes a New Lithium Discovery on Its 100% Owned Blue Clay Lithium Project in the Clayton Valley of Nevada

RETRANSMISSION: Sienna Commences Drilling on the Blue Clay Lithium Project in the Clayton Valley of Nevada

The information contained here is for information purposes only and is not to be construed as an offer or solicitation for the sale or purchase of securities. Readers should conduct their own research for all information publicly available concerning the company. Prior to making any investment decision, it is recommended that readers consult directly with Sienna Resources and seek advice from a qualified investment advisor.