Exploring in Prospective Mining Jurisdictions in the Dominican Republic

This Precipitate Gold profile is part of a paid investor education campaign.*

Precipitate Gold Corp. (TSXV:PRG,OTCQB:PREIF) is a mineral exploration company that is advancing its Pueblo Grande and Juan de Herrera gold projects in the Dominican Republic. The company is also looking to acquire additional properties to expand its portfolio. Precipitate Gold acquires 100 percent of the properties that it owns and ensures that they are not subject to any underlying vendor payments or work commitments.

Precipitate Gold’s current projects are strategically located in two of the Dominican Republic’s most prospective and active gold and copper mining camps. The company’s flagship Pueblo Grande project is contiguous to Barrick Gold (TSX:ABX) and Newmont Goldcorp’s (TSX:NGT,NYSE:NEM) Pueblo Viejo mine site on the north, east and west sides. The Pueblo Viejo mine is the eighth-largest gold mine in the world and is the largest gold mining operation in Latin America. The mine has a projected production of approximately 600,000 ounces of gold at an all-in sustaining cost of US$650 per ounce for 2019.

Precipitate Gold has been focusing its exploration on the Loma Cuaba lithocap zone, which abuts the Pueblo Viejo mine. Precipitate is fully permitted to drill from up to 30 individual drill locations with this large target area and delineated eight highly-prospective target areas for drilling in its upcoming initial fully-funded 8 to 10-hole drill program.

The Juan de Herrera project is also adjacent to another major player in another region of the country. The project is next to GoldQuest Mining Corp.’s (TSXV:GQC) Tireo project in the western Dominican Republic. The project features numerous gold, copper and zinc targets that require follow up exploration. Initial drill campaigns by Precipitate evidenced the existence of mineralization on the Juan de Herrera project that is similar to the mineralization found on GoldQuest’s Tireo project. Several key targets within Precipitate’s Juan de Herrera are permitted and ready for follow up drilling.

Aside from having major mining companies for neighbors, Precipitate Gold also benefits from the experience of its directors. Alistair Waddell is a geologist with over 20 years of diverse resource industry experience, with 10 years of that centered in the Dominican Republic. Waddell is the founder and former President and CEO of GoldQuest and is responsible for much of GoldQuest’s initial work at the Romero deposit. Another notable member of the board of directors is Quinton Hennigh, an economic geologist with 25 years of exploration experience. Hennigh helped form Novo Resources (TSXV:NVO) and its portfolio of Australian assets and has worked for major mining firms such as Homestake Mining Company, Newcrest Mining Ltd. (ASX:NCM) and Newmont Mining Corporation. 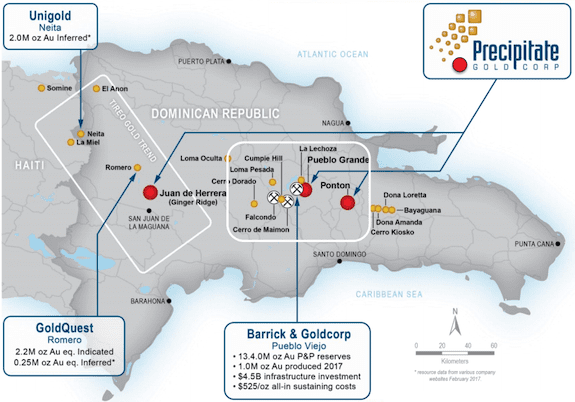 Pueblo Grande is contiguous to Barrick Gold and Newmont Goldcorp’s Pueblo Viejo mine site on the north, east and west sides. The Pueblo Viejo mine is the eighth-largest gold mine in the world and is the largest gold mining operation in Latin America. The mine has a projected production of approximately 600,000 ounces of gold at an all-in sustaining cost of US$650 per ounce for 2019.

Barrick Gold acquired the property from the government of the Dominican Republic after the government failed to put the mine into production without harming the environment. At the time, Barrick Gold was only able to acquire the land in the central portion of the project. Barrick Gold has recently expressed its desire to spend over $1 billion to upgrade the Pueblo Viejo mine, signaling the company’s commitment to the social and economic development of the Dominican Republic. 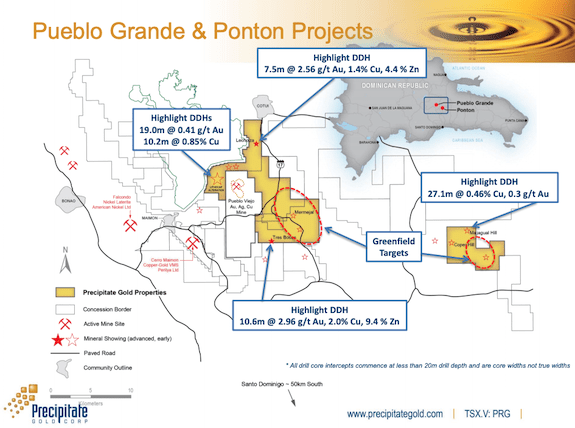 Precipitate Gold also has access to an extensive database that includes results from a heliborne magnetic-GeoTEM geophysical survey, numerous ground geophysical surveys, approximately 10,750 surface geochemical samples and extensive surface geological mapping. Through these programs, a large prospective surface area of lithocap alteration was discovered to the west of the Pueblo Viejo mine. 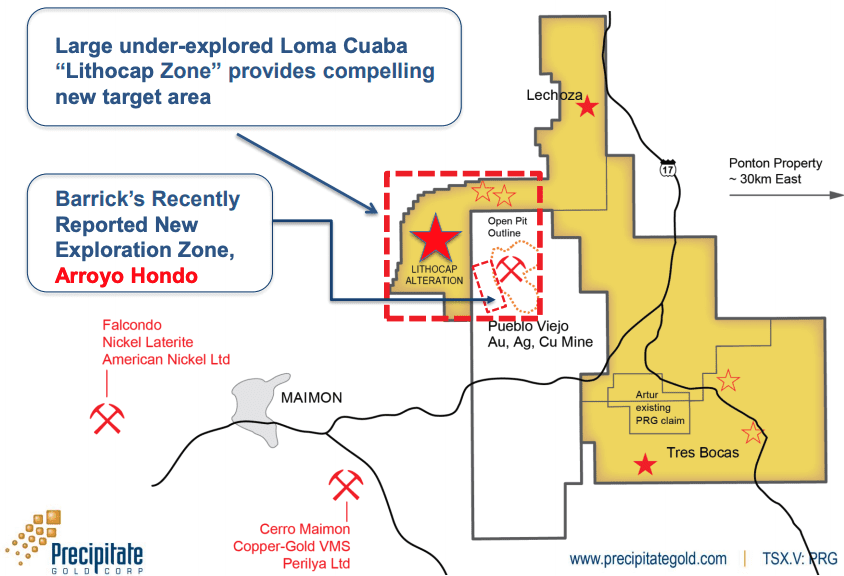 In January 2020 the Company announced that in partnership with GoldQuest Mining Corp. it has completed the purchase of drills and associated equipment sufficient to assemble up to 5 operational man-portable diamond drill rigs at a substantial discount to the assessed replacement value of the equipment. This equipment will be utilized to streamline drill costs and secure ongoing access to drills.

Precipitate Gold also completed a soil sampling program within the Loma Cuaba zone. The results refined numerous multi-element anomalies, several of which trend to the northwest. This is an important observation as northwest-trending geological structures at the Pueblo Viejo mine frequently host high-grade feeder-style gold mineralization. The largest northwest-trending anomaly covers over 2,000 meters in length and 400 meters in width. The anomaly is open to the southeast and projects from the property boundary shared with the Pueblo Viejo mine. 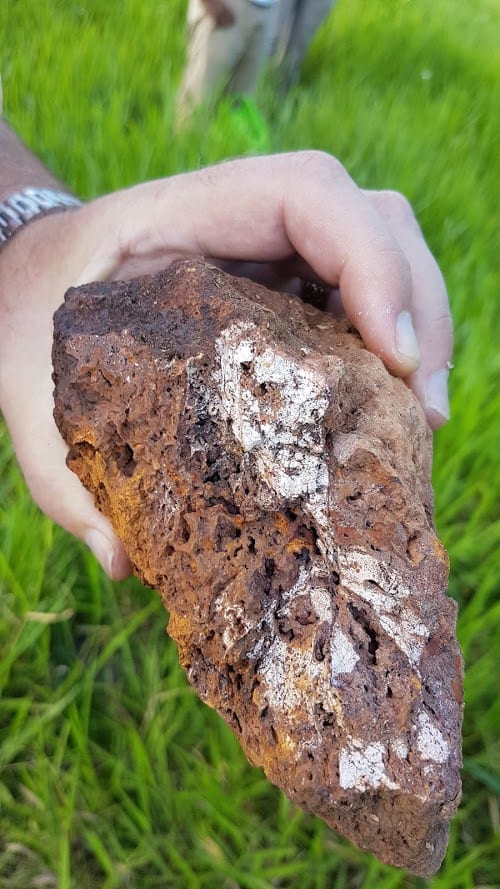 The wholly-owned 12,746-hectare Juan de Herrera project is located within the prospective Tireo gold trend in the western Dominican Republic. The property is road-accessible and covers 40 kilometers of prospective strike length across the Tireo formation. The project concessions are adjacent to GoldQuest’s Tireo project, which hosts the Romero and Romero South deposits. 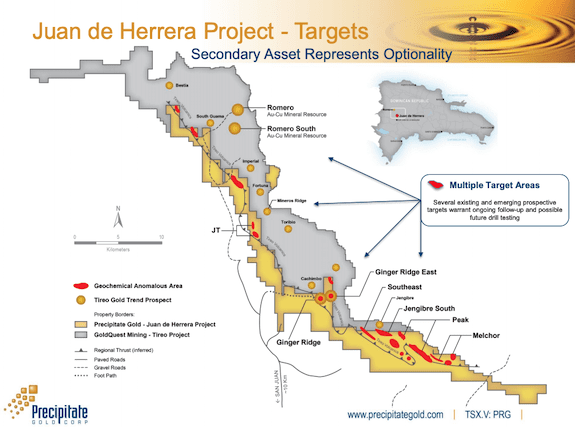 Since acquiring the property in 2012 via an option agreement, Precipitate Gold has completed a maiden property-wide, regional-scale prospecting and geochemical sampling program on the property. The program yielded numerous gold, copper and zinc targets. This has led to ongoing detailed exploration at six areas on the property: Ginger Ridge East, Southeast, South Jengibre, Peak, Melchor and JT. Several other regional targets require follow up work.

Moving forward, Precipitate Gold plans to conduct additional drilling at the Ginger Ridge East zone in an attempt to identify similar VMS-style mineralization as found on GoldQuest’s nearby Cachimbo zone. The company also intends to refine more targets for drill testing at the Southeast, South Jengibre, Peak and Melchor zones, with a near-term focus on the Southeast and South Jengibre zones. 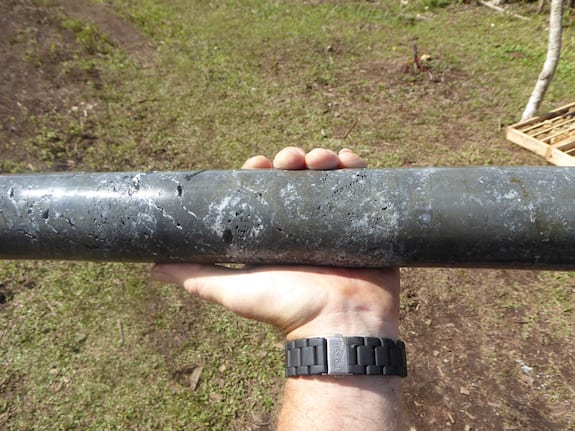 A 650-meter by 125-meter multi-element soil anomaly characterizes the Southeast zone, which has returned up to 144 ppb gold. An early-stage high-grade copper showing has also been identified in the area and has returned three meters grading 2.78 percent copper. Sampling between the Southeast and South Jengibre zones returned values of up to 1.1 percent copper and 1.1 g/t gold.

A 350-meter by 150-meter multi-element soil anomaly characterizes the South Jengibre zone, which remains open to the southeast and has returned values up to 229 ppb gold. The anomaly is located two kilometers south of GoldQuest’s Jengibre zone, where rock channeling and sampling returned results of 59.5 meters grading 1.58 g/t gold and values of 17.1 g/t gold and 1.4 percent copper.

The two-kilometer by 0.7-kilometer Peak zone includes four multi-element soil anomalies that have returned up to 286 ppb gold. The target area is located four kilometers southeast of GoldQuest’s Jengibre zone. Sampling between the Peak and Melchor areas has reported gold in soil values up to 490 ppb gold, and a rock sample grading 0.47 g/t gold and greater than one percent zinc have been recovered.

Adrian Fleming has served as a director of numerous companies including ASX-listed Goldminex Resources, TSX-listed Strikepoint Gold Inc. and Osprey Gold Development. He has over 40 years of experience in exploration, project development and mine operations. He has been a member of teams that made gold discoveries at Porgera, PNG; Big Bell, Washington; Gross Rosebel, Suriname; Hope Bay, Canada; and more recently, White Gold, Yukon, Canada. He founded Underworld Resources in 2006 which was subsequently acquired by Kinross Gold Corp for C$130 million. Fleming was also a founding Director of Northern Empire Resources which has been acquired by Coeur Mining for C$117 million. He holds a Bachelor of Science with Honors in Geology from the University of Newcastle, and is a Member of the Australian Institute of Mining and Metallurgy.

Jeffrey Wilson has 20 years of experience in the mineral exploration and mining investment industry. He brings a wealth of contacts throughout the investment community to Precipitate including institutional investors, retail brokers, investment bankers, mining analysts and private investors. During his career, he has been involved in numerous equity financings, ranging from IPOs to private placements and syndicated brokered financings.

Quinton Hennigh is an economic geologist with 25 years of exploration experience, mainly gold related. Early in his career, he explored for major mining firms including Homestake Mining Company, Newcrest Mining Ltd and Newmont Mining Corporation. Dr. Hennigh joined the junior mining sector in 2007 and has been involved with a number of Canadian-listed gold companies including Gold Canyon Resources where he led exploration at the Springpole alkaline gold project near Red Lake Ontario, a 5 million ounce gold asset that was recently sold. In 2010, Dr. Hennigh helped start Novo Resources and began assembling its Australian exploration portfolio. Dr. Hennigh obtained a Ph.D. in Geology and Geochemistry from the Colorado School of Mines.

Alistair Waddell is a geologist with over 20 years of diverse resource industry experience. His experience bridges both junior and major mining companies providing a broad vision of many aspects of the resource industry. He was a founder and former President and CEO of GoldQuest Mining Corp., a company focused on early-stage exploration in the Dominican Republic. GoldQuest’s ground-breaking regional exploration laid the foundation for the more recent discovery of the Romero deposit and the heightened interest in the Tireo gold belt, where Precipitate is currently active with its Juan de Herrera project. Waddell’s knowledge and experience in the region bring invaluable guidance to Precipitate. His most recent prior role was Vice President Greenfields Exploration for Kinross Gold Corp. Mr. Waddell is currently President and CEO of Inflection Resources, a private-stage exploration company focused in Australia. Waddell has lived and worked as an expatriate in Australia, Bolivia, Venezuela, Peru, Ecuador, Chile and the Dominican Republic.

Lon Shaver is a CFA charterholder with over 25 years of capital markets and corporate finance experience, mostly focused on the Canadian mining sector. He is currently Vice President at Silvercorp Metals Inc., which operates multiple mines in China. Previously, he spent 13 years in investment banking roles with Merrill Lynch and Raymond James guiding corporate clients through hundreds of closed financing and M&A transactions. Previously, Shaver was a research associate and mining analyst with an institutional sell-side firm. His corporate experience includes CFO roles with a publicly-listed mining company and a private technology company. Prior to his current role at Silvercorp, he acted as a consultant providing corporate development and capital markets support to companies in the resource sector, and is on the boards of several public companies.

Michael Moore is a British Columbia registered professional geologist with a B.Sc. geology degree (1989) from Carleton University (Ottawa, Ontario). He is a third generation miner with over 25 years of national and international field work and project management experience. Moore’s diverse exploration skill sets include base, precious and industrial metal projects; ranging from grassroots to advanced-stage exploration levels. A brief snapshot of his over 25-year career evidences experience with (i) a wide range of gold-copper deposit types in Greenland, Mexico, Peru ,Cuba, Ghana, Canada and the US, (ii) Achaean nickel-PGM deposits in Nunavut, (iii) manto-type carbonate replacement base metals, (iv) low sulfidation epithermal gold systems in Mexico, (v) uranium and tungsten mineralization in various Canadian provinces and (vi) intrusion-related gold and copper-gold systems in northwest Canada.

The information contained here is for information purposes only and is not to be construed as an offer or solicitation for the sale or purchase of securities. Readers should conduct their own research for all information publicly available concerning the company. Prior to making any investment decision, it is recommended that readers consult directly with Precipitate Gold Corp. and seek advice from a qualified investment advisor.