Pistol Bay Mining (TSXV:PST) is a base metals exploration company currently focused on developing its 20,700-hectare zinc-copper land holding in Ontario’s Confederation Lake VMS Greenstone belt. Owning 100 percent of its holdings, the company is currently exploring the property and its historic deposits having kicked off its initial drilling program in March 2018.

Pistol Bay is led by a management team and board of directors with vast experience in running public companies. They are also supported by a professional geologist, Glen MacDonald, who brings over 30 years of mining experience, including in running Potash Inc. Management and individuals close to the company are significantly invested in the company, holding 25 percent of outstanding shares.

Up until early 2018, Pistol Bay has been working on ammassing its land position in along the Confederation Lake VMS Greenstone belt in Ontario. Under that initiative, the company has developed a wholly-owned land package of 20,700 hectares, which is made up of 1,096 mining claims. The Confederation Lake properties sit within the mining-friendly jurisdiction of Red Lake, which has shown itself to be a politically-stable environment open to mining initiatives. The properties are supported by existing infrastructure including easy road access and available power. 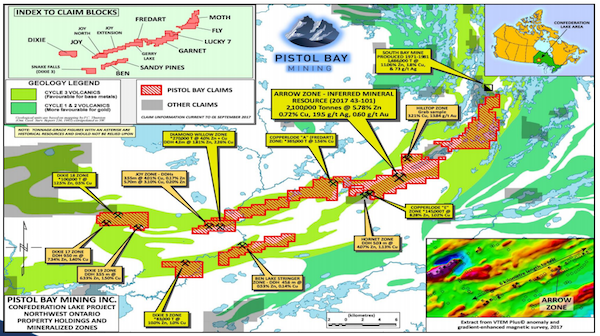 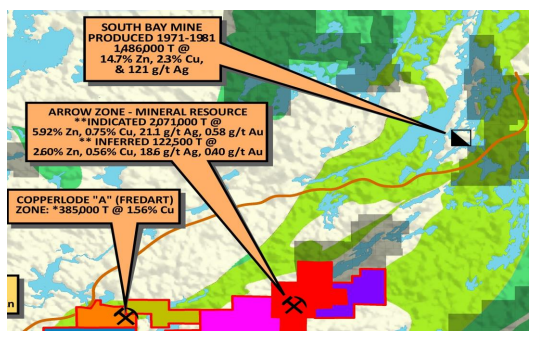 In March 2018, Pistol Bay announced that it had kicked off its 3,500-meter drilling program. The first three drill holes will test the Arrow Zone and their products will be used as part of a metallurgical testing initiative.

The Fredart zone has a historical mineral resource (non-NI 43-101 compliant) of 386,000 tonnes grading 1.56 percent copper and 33.6 g/t silver. The property was also drilled in the 1960s, during which it presented VMS-type copper mineralization associated with silver values, open at depth. Reported samples from the 1970s also included up to 1.46 percent molybdenum. 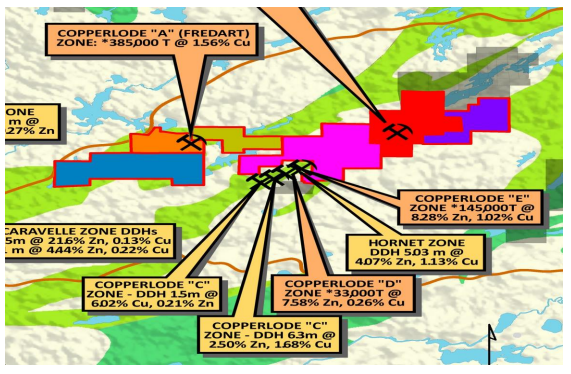 Past exploration on the property has shown four conductive zones with lengths of 400, 850, 900 and 950 meters over a total length of 6.5 kilometers. As part of the 2018 drilling program, the company will move the drill to the Fredart Zone once it has finalized the three drill holes at the Arrow Zone.

The Joy North property sits in the southwestern portion of Pistol Bay’s land holding, and is surrounded by the Ben Lake and Joy properties. The property includes a 1,000-meter conductive zone, which was defined by a HLEM survey. Additional exploration work has also uncovered indicated anomalies of zinc, copper and gold linked to the conductor. 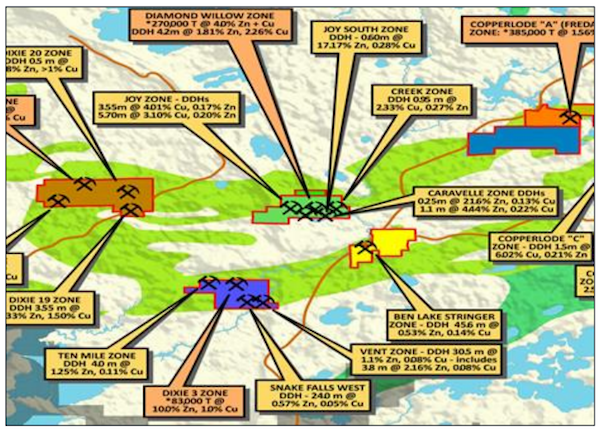 Joy North covers five VMS mineralized zones, four of which have been drilled and produced the following highlights:

The Dixie zinc copper collection of claims includes the former Snake Falls property, which sits 45 kilometers southeast of Red Lake. The largest VMS deposit in this region is the South Bay mine, which was in production between 1971 and 1981, producing 354  million pounds of zinc, 57.6 million pounds of copper and 3.73 million ounces of silver. 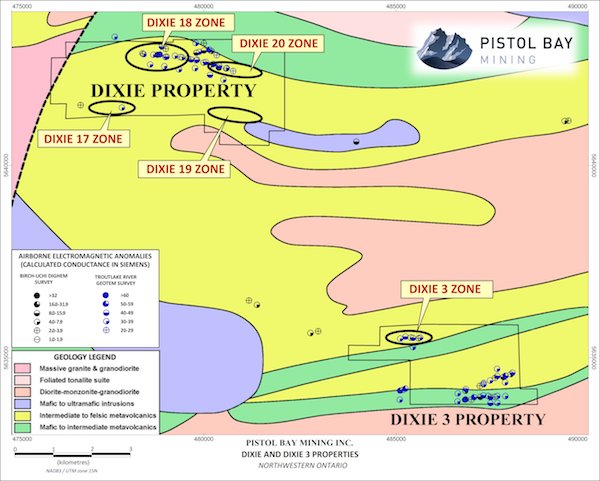 The mineralized zones on the Dixie claims were explored by Selco, Noranda and Tribute Minerals from the 1980s to the late 2000s. Drilling programs by all three owners covered a total 58 holes and delivered results of 1.25 meters of 9.71 percent zinc, 0.2 percent copper and 10.7 g/t silver, and 1.25 meters averaging 5.32 percent zinc on the Dixie 19 claim. Historical resources for the area include 150,000 tons at 14 percent zinc.

The company is working on compiling the historical data associated with the property and review all the data collected by Tribute Minerals in their drilling initiatives.

This collection of 33 mining claims covers 3,700 hectares, hosting a nine-kilometer portion of the Confederation Lake greenstone belt. Historical work in the region has demonstrated a number of zinc-bearing sulphide zones. The properties have seen extensive exploration since the 1960s, which covered approximately 90 drill holes.

Results from Pistol Bay’s VTEM survey have indicated that the area has a strong conductive response, particularly showing two well-defined response lines with a length of up to 400 meters.

Charles Desjardins brings more than 25 years of public company experience in the areas of finance and public company management. He is President and CEO of Tandem Capital Group Inc. which was active in the investor relations field during the mid 1980’s. He was also past president of numerous public mineral exploration and technology companies which traded on the TSX Venture exchange.

Doug McFaul has 20 years of experience with companies involved in the public markets. He has acted as a director and held senior management positions with various public companies. He completed the Canadian Securities Course in 1994. He also obtained a degree in finance from the University of Alaska in 1989

Dave Bissoondatt has over 20 years of experience with companies involved in the public markets. He has held the position as director in various companies traded on the TXS Venture Exchange. He has also served on the Audit Committee in some of the companies. He graduated from BCIT in Control Electronics in 1975 and in Medical Radiology in 1980. He has been a business owner for many years. Presently he also has a managerial position in the healthcare field.

Glen MacDonald is a professional geologist with over 30 years of exploration and mine development experience in the mineral industry. He has a BSc. (1973) from the University of British Columbia. He is a member of the Alberta Professional Engineers, Geologist and Geophysicists Association since 1982 and of the British Columbia Association of Professional Engineers and Geoscientists since 1993. Co-founder of and a director of Potash One Inc. from March 2003 to May 2009. He is currently a director of several other TSX Venture listed resources companies.

*Disclaimer: The profile provides information which was sourced and approved by Pistol Bay Mining in order to help investors learn more about the company. Pistol Bay Mining is a client of the Investing News Network (INN). The company’s campaign fees pay for INN to create and update this profile page, to which links are placed on Investingnews.com and channel newsletters.