This One World Lithium profile is part of a paid investor education campaign.*

One World Lithium Inc. (OTCQB:OWRDF) (CSE:OWLI) is an exploration company that acquires lithium brine projects of merit. One World Lithium currently owns a 60 percent interest in the Salar del Diablo lithium brine project in the State of Baja California, Mexico and is working towards acquiring an additional 30 percent working interest. The property covers a large salar of which only 10 percent has been explored.

The Salar del Diablo is one of the world’s larger lithium brine prospects to be drilled during 2019 and has the same geological features as the Salar de Atacama in Chile, which accounts for 27 percent of the world’s lithium supply. According to the US Geological Survey (USGS), the five necessary geological attributes for the formation of a lithium brine deposit are: a closed basin, hot springs, volcanic rocks containing lithium, active faults to transport lithium into the basin and a salar in a region of high heat flow. The Salar del Diablo has all of these conditions.

To date, three geophysical zones have been outlined on the property. The three zones cover 54 square kilometers with two of the zones continuing beyond the exploration grid.

One World Lithium will resume its  4,250-meter drill program on the property in late September,  2019 to test the three geophysical zones, a geochemical anomaly and geological structures. As of June 13, there have been five holes drilled that did not reach their planned total depths as discussed in the Company’s news released on July 13 and July 25, 2019 where the drill holes did not intersect the drill targets. In late September the Company may re-drill some of the five holes and the 7 holes not yet drilled. In the long term, One World Lithium’s mission statement is to drill and define a significant resource on the property before seeking a partner to bring the project to production.

The 103,500-hectare (400 square mile) Salar del Diablo lithium brine project is located in the State of Baja California , Mexico. The property is 137 kilometers south of the US border and 35 kilometers from San Felipe, a regional service center that may  reduce exploration and development costs. San Felipe also has a seaport which may be upgraded to access the international markets. The property covers a large salar where less than14 percent has been explored. 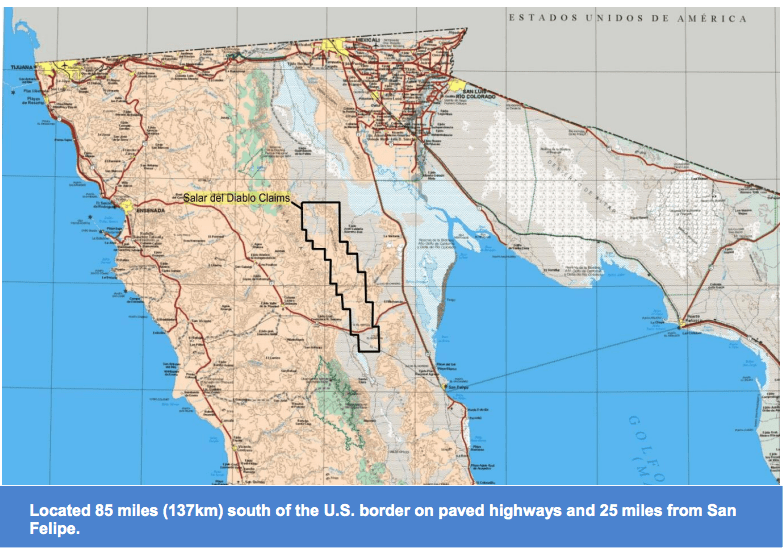 Geophysical contractor SJ Geophysics has defined three conductive zones on the property: The three zones cover over 54 square kilometers, with zones one and two being open-ended as they are larger than the survey grid.

Zone Three is located to both the east and west of Zone Two. The Zone is estimated to be approximately 200 meters thick and covers 30 square kilometers. The zone is open to the north and south and is continuously conductive. 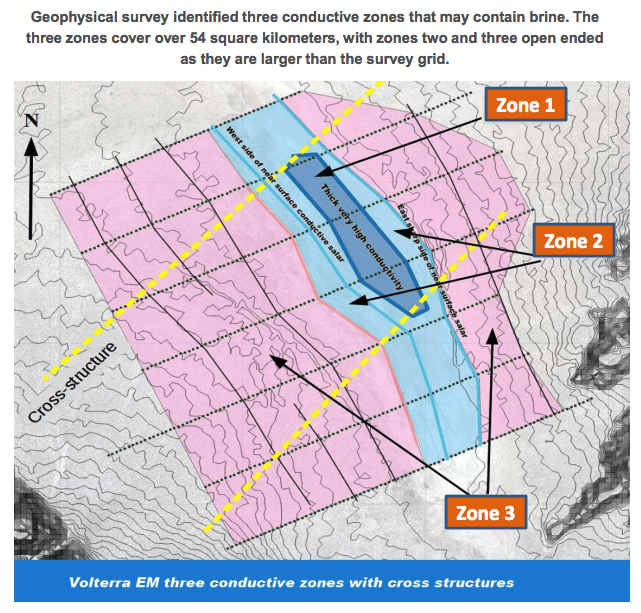 One World Lithium has collected 24 initial geochemical surface samples over 80 kilometers that all contained lithium with an average grade of 74 ppm lithium. Within the geophysical survey area, the company collected an additional 59 samples that have an average grade of 86 ppm lithium, that outlined a 150-square-kilometer anomaly. The samples also assayed values of 1.9 percent potassium, 400 ppm boron, 10,000 ppm cesium which suggests the geochemical anomaly may be close to a regional volcanic heat source.

One World Lithium has compiled all of the data from geochemical, geophysical and geological programs to identify 12 drill hole locations for its 4,250-meter drill program that is planned to resume in late September  of 2019 to test the three geophysical zones, a geochemical anomaly and geological structures. Five holes have already been drilled but did not reach their planned total depth as discussed in the company’s news released on July 11, and 24 2019.

In future work programs, the company will continue its current drilling program and intends to complete a gravity survey over the property to confirm the basin’s depth, which is estimated to reach 8,000 feet, and establish the basin’s configuration. 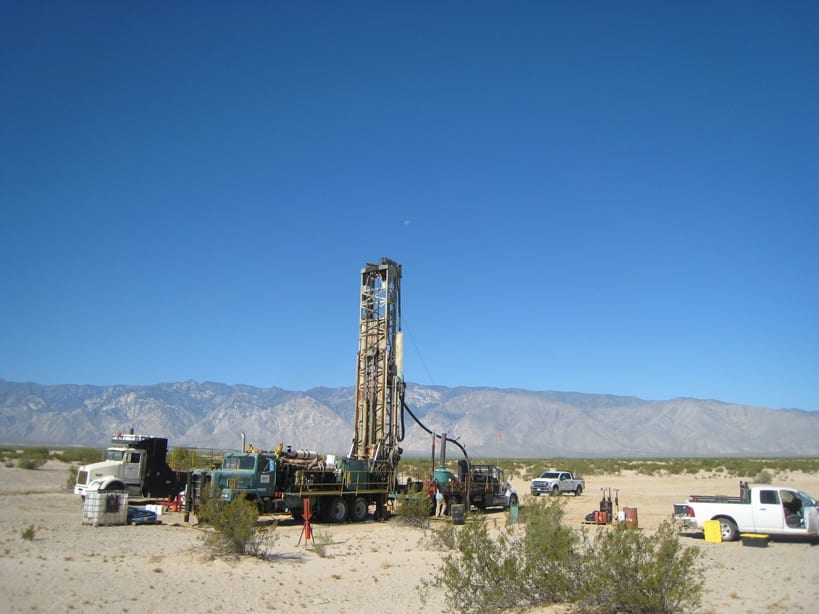 Doug Fulcher has over 40 years of experience in mining and exploration project management. He was the CEO of Abacus Mining and Exploration Corp. and spent several years in the advancement of the Ajax deposit which was then sold to KGHM, leaving Abacus with a 20 percent carried interest. He was also the President and CEO of Maritime Resources Corp., which is bringing the Hammerdown gold project back to production.

John Hamilton obtained his CA from Ernst Young. He held the position of CFO and President of a number of private and public companies over the last 40 years. He has managed a number of companies that have listed on the CSE, TSX, OTC and NASDAQ stock exchanges.

John Hiner has an exploration history of over 45 years with several junior and major mining companies to explore for geothermal energy, precious metals and industrial minerals. As such, he was on several exploration teams that are credited with eight discoveries, of which five became mines that are still producing. He has also been successfully exploring for and defining lithium prospects since 2009.

Kevin Milledge has over 35 years of experience in mineral exploration, including in Mexico and the Baja Peninsula. He is the President of Pamicon Developments Ltd., which is a full-service geological consulting firm with global experience. He is the company’s representative and will be involved in the drilling and sampling program at the Salar del Diablo project.

Andrew Pooler holds a Bachelor of Science degree in Mining Engineering from the University of Idaho and has over 30 years of experience as a mining engineer and operations executive. He is currently a director and the Chief Operating Officer for Maritime Gold Resources Corp. Prior to joining Maritime, he held positions including the Chief Operating Officer of Esperanza Resources Corp., Chief Executive Officer of PanTerra Gold Limited and Chief Operating Officer of Abacus Mining and Exploration Corporation and KGHM Ajax. He also spent five years as Senior Vice President Mine Operations for Pan American Silver Corporation where he was responsible for the production performance of six operating mines located in Mexico, Peru, Argentina and Bolivia.

Mr Burns has extensive experience as both an advisor, director, and Officer of several public traded companies as well as an advisor to several large funds which have significant interests in the resource and technology sectors.  Previously, Mr Burns was the managing director of Derivative Trading, and structural finance group at Barklay’s Metals, a division of the Barklay Bank, PLC

Tim Brock’s experience includes start-up companies both public and private in Canada and the United States for corporate structures, finance, sponsorship, and shareholder relations. He has assisted and sponsored several stocks that traded between $7 to $27 per share.

John E Hiner, SME Registered Member and a Qualified Person as defined by National Instrument 43-101, has reviewed and approved the scientific and technical disclosure contained in this corporate profile.

The information contained here is for information purposes only and is not to be construed as an offer or solicitation for the sale or purchase of securities. Readers should conduct their own research for all information publicly available concerning the company. Prior to making any investment decision, it is recommended that readers consult directly with One World Lithium and seek advice from a qualified investment advisor.