Situated in the Middle of the Pilbara Gold Rush

This Monterey Minerals Inc. profile is part of a paid investor education campaign.*

The Sherlock River property is located in the Pilbara region, which is historically known to possess conglomerate gold. The property remains largely underexplored; however, some exploration work has been completed on the property. Monterey Minerals is currently developing an exploration plan for the property.

The Pilbara region has captured the attention of major mining companies such as De Grey Mining Limited (ASX:DEG), Novo Resources Corp. (TSXV:NVO), Kairos Minerals Ltd. (ASX:KAI) and Pacton Gold (TSXV:PAC). Each of these companies is actively and aggressively exploring the area around Monterey Minerals’ properties.

To ensure that the company has a diverse portfolio, Monterey Minerals has secured the 13,560-hectare Cobalt Mountain copper porphyry property in British Columbia, Canada. The company has recently commenced a field program comprised of geological mapping, prospecting and soil sampling on the property. The results are pending.

In February 2019, Monterey Minerals completed its purchase of Ridge Street Investments Pty Ltd. for the acquisition of two mining tenements, collectively known as the Sherlock River property. The two tenements cover 135 square kilometers of land in the Pilbara region in Western Australia. The Sherlock River project is located within the northwest Pilbara Craton and the central Pilbara tectonic zone. Portions of the property cover the sediments and intrusives at De Grey Mining’s Mallina Formation.

In April 2019, Monterey Minerals completed its purchase of CTTR Mining Tenements Pty Ltd. for the acquisition of seven mining tenements that cover 525 square kilometers in the Pilbara.

“As we continue to increase our property portfolio, we are now looking forward to exploring our over 670 square kilometers in the Pilbara Basin. We plan to announce our exploration plans upon the completion of our internal review of the historical data,” said Monterey Minerals President and CEO James Macintosh. 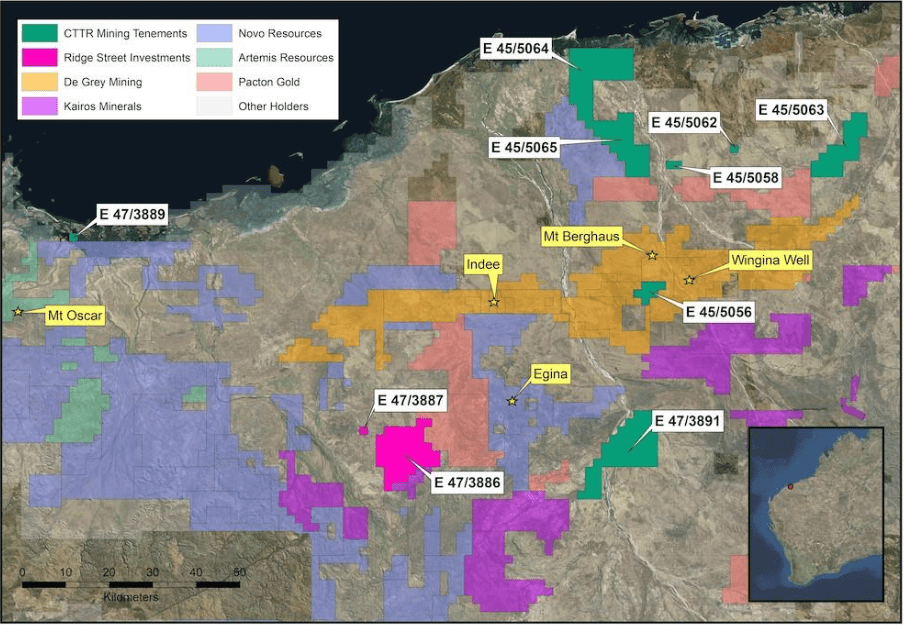 The 155-square-kilometer tenement is adjacent to Novo Resources and Pioneer Resources’ Egina project and is directly northeast of Kairos Minerals’ Croydon project. Kairos Minerals has recently discovered over 390 ounces in gold nuggets at Croydon. The tenement is also two kilometers away from Pacton Gold’s Friendly Creek project, which boasts one of the richest alluvial gold nugget patches in the Pilbara.

The 20-square-kilometer tenement is surrounded by De Grey Mining’s Pilbara gold and Turner River base metals projects. The property is also adjacent to De Grey Mining’s Wingina mining center and 58 kilometers south of the Port of Hedland.

The two tenements collectively cover over 245 square kilometers. The properties are located approximately 20 kilometers to the west of Port Hedland. Novo Resources holds an extensive land package immediately to the west and Arrow Minerals has properties to the south.

The two tenements collectively cover 218 square kilometers. The properties are adjacent to Pacton Gold on the west, just north of properties owned by Novo Resources. E47/3958 is seven kilometers to the north of De Grey Mining’s Withnell mining centre. There is a prospective quartz vein in the center of the property that can be traced for over 400 meters at surface and it displays evidence of artisanal mining. Pacton Gold’s exploration in the adjacent area in similar-aged granitoids has found occurrences of swarms of quartz veins, many of which host gold mineralization.

The 20-square-kilometer tenement abuts Kairos Minerals’ Croyden project and is northwest of Pacton Gold’s E47/3905 tenement. The Hardy formation occurs within one kilometer of the western boundary of the property. The Hardy Formation has been targeted for gold and uranium mineralization in the past.

The 32-square-kilometer tenement is five kilometers south of the Mosquito Creek formation and the Sandy Creek copper-lead-zinc-silver prospect is seven kilometers to the east. The property remains largely underexplored; however, DeBeers Australia Ltd. conducted a regional stream sediment sampling and bulk sampling program on the property while looking for diamonds.

James Macintosh has over 30 years of experience in the mining industry and as a mining analyst. For the past 25 years, he has held various executive and directorial positions with numerous public and private companies in Canada and the US. He is the President, CEO and Director of Monterey Minerals Inc. and an advisor to Southern Pioneer Resources Corp., both private exploration companies.

As a Board Director, Macintosh sits on the Audit Committee of Silver Mountain Mines Inc. He was recently the Lead Director and Chairman of the Audit Committee for Carlisle Goldfields Limited, a Canadian gold company sold to Alamos Gold Inc. He graduated from Queen’s University with a B.Sc. (Honours, Geological Sciences) and sits on the Queen’s University Geology Council.

Guy T. Le Page — Chairman of the Board

Guy Le Page was Head of Research at Morgan Stockbroking Limited (Perth). As Head of Research, he was responsible for the supervision of all industrial and resource research. Prior to that, he was a resources analyst covering exploration and mining companies listed on the Australian Stock Exchange. Prior to joining the brokerage industry, he spent 10 years as an exploration and mining geologist in Australia, Canada and the US. Le Page holds a B.A., a B.Sc. and an M.B.A. from the University of Adelaide, a Bachelor of Applied Science (Hons) from the Curtin University of Technology and a Graduate Diploma in Applied Finance and Investment from the Financial Securities Institute of Australia.

Kyler Hardy is a natural resource-focused entrepreneur. He has been involved in the sector for over fourteen years with both private and public businesses. During his career in the industry, he has gained a wide array of experience including diamond driller, project manager, exploration service contractor, business consultant, public company management and private equity investor. He has built businesses from early stage start-ups to advanced operating companies in several sectors. He was a founder and former CEO of a large geosciences and logistics management business specializing in grassroots to brownfields exploration and development. Hardy is experienced in project generation, exploration management, logistics, raising capital, corporate development and developing strategic alliances and partnerships. He is currently Vice President of Venex Capital Corp and CEO Ridge Royalty Corp.

The information contained here is for information purposes only and is not to be construed as an offer or solicitation for the sale or purchase of securities. Readers should conduct their own research for all information publicly available concerning the company. Prior to making any investment decision, it is recommended that readers consult directly with Monterey Minerals and seek advice from a qualified investment advisor.