Gold-Silver and Nickel Exploration Across the Americas

This Inomin Mines profile is part of a paid investor education campaign.*

Mexico has been a hot spot for gold production for over 500 years. Home to prolific mining districts like Sonora, Chihuahua and Durango, the North American nation is seeing a revitalization of gold and silver exploration, as the country leverages its favorable mining jurisdiction status.

Inomin Mines Inc. (TSXV: MINE) is a mineral exploration company focused on identifying, acquiring and developing high-quality mineral properties in the Americas. The company currently owns and operates a portfolio of advanced-stage gold-silver and nickel projects in Oaxaca, Mexico and British Columbia, Canada which offer strong potential for significant growth.

As an emerging player in the precious and base metal space, Inomin presents an early-stage, high-growth opportunity given the company’s assets and relatively low market capitalization. Inomin expects the company’s shareholder value to increase considerably as its mineral properties’ are advanced and further complementary project acquisitions are made.

In March 2021, the company announced the closing of the acquisition of its flagship La Gitana gold-silver project, as well as the nearby Pena Blanca gold-silver property in Oaxaca, Mexico. 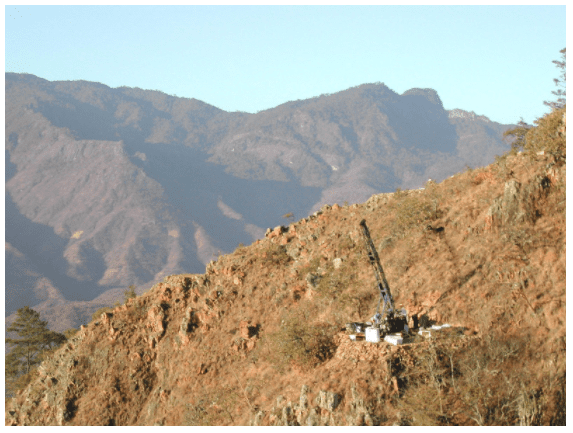 The company’s two nickel projects in British Columbia are the highly prospective Beaver and Lynx properties. Together they total approximately 20,000 hectares and are ideally located near the world-class Gibraltar mine. Inomin’s strategic, large property position in this highly mineralized, infrastructure-rich region, are strong attributes for these projects.

Beaver and Lynx host potential for multi-billion, bulk-tonnage, sulfide nickel deposits with cobalt. Initial drilling at Beaver and metallurgy studies have returned positive results. The company intends to advance these properties and attract a larger partner to develop these assets.

Through the acquisition of new attractive properties and the advancement of projects, Inomin is positioned to create significant value for shareholders and participating communities. 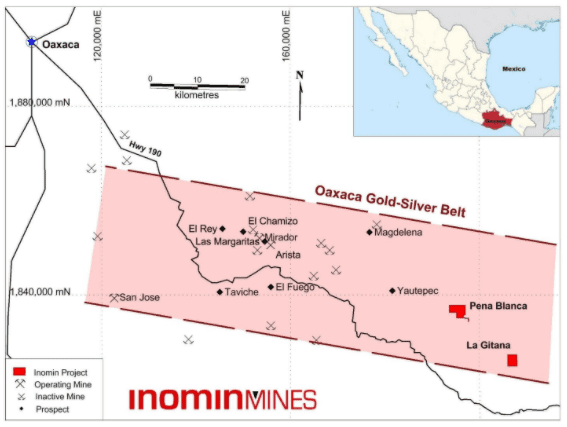 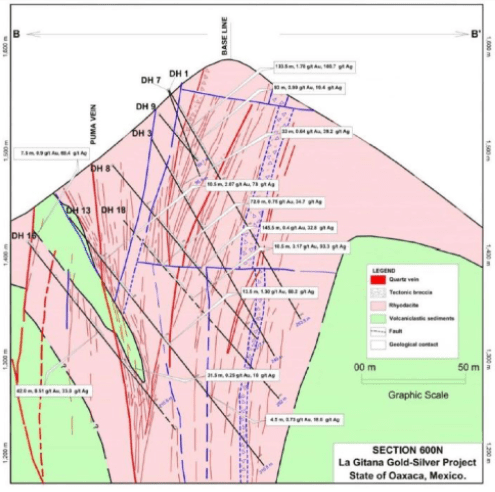 A 38 hole diamond drilling program at the main Cerro Di Oro zone confirmed near-surface gold and silver mineralization in a zone 400 – 500 meters long, 50 to 150 meters deep with grades ranging from 0.25 to 27.8g/t gold and 5.0 to 2,330g/t silver. The gold-silver system remains open to expansion. 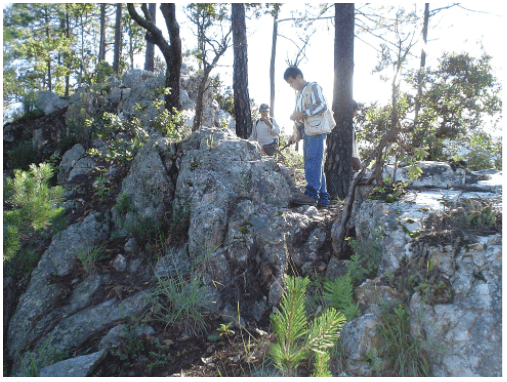 The Pena Blanca property, situated just 15 kms from La Gitana, hosts similar geology with an even larger mineral footprint. Exploration at Pena Blanca has discovered widespread gold and silver mineralization on surface associated with an extensive area of hydrothermal alteration and mineralized structures. Inomin owns a 100% interest in the Pena Blanca project.

The Beaver property spans 7,528 hectares and is situated in south-central British Columbia, 15 kilometers east of the Gibraltar Mine, the second-largest open-pit copper mine in Canada. In addition to its favorable location, the nickel-rich property has the advantage of excellent infrastructure such as hydro-electricity and roads to access all parts of the property. Inomin owns a 100% interest in the property, presenting an attractive partnership opportunity.

Initial exploration and metallurgical studies at Beaver, including geophysical surveys and diamond drilling programs during 2013 – 2014, demonstrated the property’s potential to contain large areas of near-surface, disseminated nickel and cobalt, amenable to conventional extraction methods. Furthermore, as the mineral hosting rocks break down quite readily, alternative low-cost recovery methods such as heap leaching may be possible.

In 2021 ground magnetic surveys and drilling is planned to continue to test large areas for nickel mineralization. 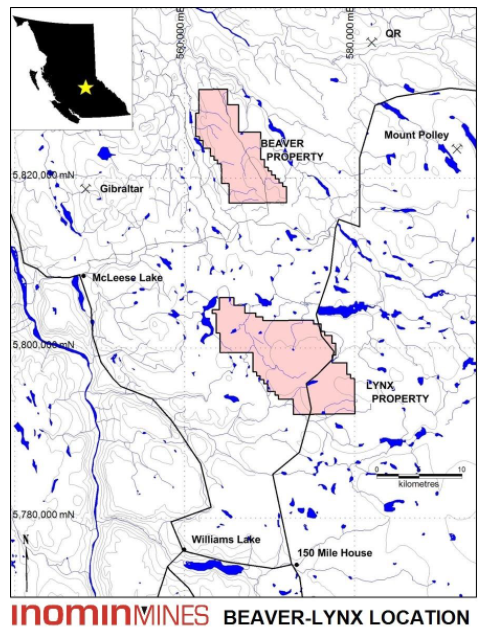 The 12,662-hectare Lynx property is situated approximately 12 kilometers south of the Beaver project. Similar to the Beaver property, Lynx hosts multiple large areas prospective for nickel and cobalt. These targets have the potential for hosting bulk-tonnage nickel deposits. Inomin owns a 100% interest in the property.

The Lynx property is within the Cache Creek Terrane surrounded by upper Triassic-aged rocks of the Quesnel Terrane. Regional Stream Sediment (RGS) data, collected by province of British Columbia geologists, identified a ten by five-kilometer nickel anomaly with rock samples grading up to 0.27% nickel. These findings point to the.property’s potential to host widespread, nickel mineralization. Together with the Beaver project, the region has the potential to develop into a major nickel-cobalt mining district.

Mr. Gomez is an entrepreneur that has founded and managed private enterprises in mining, technology, and sports. Prior to being a founder of Inomin, Mr. Gomez founded and was president of a private gold exploration company in Colombia. Under his leadership, the company acquired strategic land and mining interests in some of the country’s top gold districts. Mr. Gomez also founded and was President of U3O8 Media Inc. a leading news provider for investors on the uranium market. The U3O8.biz model was used to establish the Investing News Network. His consulting company, Oro Grande Capital Inc., provides marketing, corporate development and funding services to select public and private companies. Mr. Gomez has a Bachelor of Arts degree from the University of Victoria.

Mr. Pietrobon holds a Bachelor of Commerce degree from the University of British Columbia (1975) and has been a member of the Canada as well as the B.C. Institute of Chartered Professional Accountants since 1978. Mr. Pietrobon brings to the Company considerable business, accounting and audit experience, with both public and private companies, including experience performing audits for publicly listed companies.

Mr. Shack has practiced throughout his career as a commercial solicitor advising both public and private companies. Mr. Shack has extensive experience advising clients in relation to day-to- day commercial transactions and operations. In addition, Mr. Shack has experience advising private and public companies on corporate finance matters, including securities issuances and secured lending. Mr. Shack also assists clients with corporate structuring and reorganizations, including transactions involving amalgamations, continuations, dissolutions and tax motivated transactions. Ari is qualified to practice law in British Columbia and holds both a Bachelor of Commerce degree (1993) and a Bachelor of Laws degree (1997).

Mr. Ortiz evaluates the company’s gold-silver properties in Mexico and new acquisition opportunities in the country. Mr. Ortiz, who started his career as a geologist in Oaxaca State, has worked throughout Mexico. His immediate previous position was Senior Exploration Geologist for a Mexican subsidiary of First Majestic Silver Corp. Prior to this position he worked as Senior Geologist at Endeavour Silver Corp. He also was Chief Geologist at Goldgroup Mining Corp.’s Cerro Colorado mine in Sonora.

Mr. Torres represents the company with local communities, government officials and other stakeholders. Mr. Torres is a civil engineer who worked as a mine manager and field engineer at Gold Resource’s El Aguila gold-silver mine in Oaxaca State. At El Aguila he was involved in developing infrastructure for the project including road access, mining camp, open-pit and under-ground mine development, and tailings dam. Mr. Torres also worked as Habitat Program Supervisor in Oaxaca with SEDESOL, a Mexican Federal Government Ministry of Social Development agency in charge of urban development to improve living standards in rural communities.

Mr. Peters, P.Geo, has over 30 years of experience in the mining industry. He is currently a geological consultant for junior mining companies including Westhaven Ventures Inc, Commander Resources Ltd, and Fjordland Exploration Inc. Following four years as mine geologist for Homestake Canada, he spent 25 years as Exploration Manager for over ten junior companies with projects located across Canada, West Africa, South America, United States, and Greenland. He has also acted as project manager during joint ventures with Sumitomo Mining, Capstone Mining, and Gold Fields Canada. Notable discoveries in British Columbia, Canada Mr. Peters has been involved with include the Woodjam porphyry copper-gold deposit, the Shovelnose gold discovery, and the Beaver-Lynx nickel discoveries.

Mr. Yeomans, P.Geo, is a gold exploration professional with over 36 years’ experience in all stages of gold exploration throughout the Americas. He gained extensive exploration management experience across the entire Guiana Shield of South America with BHP, along with several junior mining companies. Mr. Yeomans has worked as a senior exploration manager throughout all the major gold mining camps in Canada. He has generated projects which resulted in significant NI 43-101 compliant gold resources on three different projects including the Duquense-Ottoman gold project in Quebec. Mr. Yeomans has worked as a consultant to IAMGOLD and Dundee Precious Metals, evaluating advanced gold projects across Canada, western USA and Alaska. He obtained his HBSc. in Geological Sciences from Queen’s University in 1982.

Mr. Jaramillo, M.Sc., P.Geo, is an international geological consultant with over 30 years of experience in the mining industry. Mr. Jaramillo has worked for major and junior mining companies as senior project geologist, technical director, chief mine geologist and exploration and mine manager. His work has included regional exploration, property assessment, resource estimation and mine operations. He has worked in Canada, the United States and Latin America. Most of his experience in the last 25 years has been focused on precious metal deposits. Mr. Jaramillo was directly responsible for the discovery of the Langosta porphyry copper-gold deposit in Mexico, and the discovery of the Las Lomas porphyry copper-gold deposit in Peru. He holds an M.Sc.A. degree in Mineral Exploration from McGill University and a B.Sc. degree in geology from Washington & Lee University.

Mr. Winfield, M.Sc., P.Geo, has more than 40 years of experience in the minerals industry as a geologist, corporate executive and consultant. Following 14 years with major mining companies Texasgulf Inc. and Boliden Inc., he held the position of VP Exploration for Greenstone Resources and Eldorado Gold Corporation leading to the exploration and development of five gold deposits. Subsequently as President and or CEO he has led companies exploring primarily in South America for the last twenty years.

The information contained here is for information purposes only and is not to be construed as an offer or solicitation for the sale or purchase of securities. Readers should conduct their own research for all information publicly available concerning the company. Prior to making any investment decision, it is recommended that readers consult directly with Inomin Mines and seek advice from a qualified investment advisor.