This profile is part of an investor education campaign. The profile provides detailed information which was sourced and approved by Eureka Resources in order to help investors make better investment decisions. The Company’s support of Investing News Network ensures we can continue to bring you unbiased, independent news and information.

At the FG project (formerly Frasergold) in B.C., Eureka’s partner Canarc Resource Corp. will conduct a 2017 exploration program which has the potential to significantly increase gold resource ounces on the property. The FG property has an established indicated gold resource of 376,000 ounces and an inferred gold resource of 634,900 ounces.

Canarc is planning to commence their 2017 exploration program at FG in the summer which will include eight to twelve diamond drill holes. Drilling will focus on the most advanced prospective targets that have been identified along the northwest extension of the current resource established at FG. Soil sampling, prospecting and mapping will be conducted to follow up on other highly priority targets identified by geophysics.

Eureka’s two strategically significant properties in Yukon Territory are the Luxor and TAK projects. The company is conducting in 2017 a two-phase exploration program at TAK with news flow expected throughout year. Additional Yukon-based project acquisitions are also presently under consideration.

At the Gold Creek Property, located in the center of the historic Cariboo Gold Camp, the company has begun preparations for its 2017 exploration program which includes drilling which is slated to begin in the second quarter of the year.

Eureka has diversified its resource holdings through an option agreement with Nevada Sunrise Gold Corporation for the right to earn a 50-percent interest in the Gemini Lithium Project. Gemini is located approximately 40 kilometers south of North America’s only producing lithium mine at Silver Peak.

Global demand for lithium resources is increasing from not only the automotive battery sector but also from the rise in demand for large-scale power storage for renewable energy. Eureka Resources expects overall lithium demand will more than double from present levels by 2025. Eureka will begin its first drill program at Gemini in March 2017.

The Luxor and TAK gold projects are located in Yukon’s Dawson Range gold belt. The region is home to some of the most notable gold discoveries in Canada in recent years, including Goldcorp’s Coffee deposit, Kinross’ White Gold Deposit, Western Copper and Gold Corporation’s Casino deposit and Independence Gold’s Boulevard project.

The Luxor Project covers 7,000 hectares and is comprised of the Ophir, Sheba and Hav claim blocks. The project is located in the White Gold district, which hosts major porphyry, breccia and vein occurrences—all of which have been identified proximal to Eureka’s claim blocks.

Luxor is located 80 kilometers southeast of Dawson City, Yukon and is accessed via a well-maintained gravel road from the city. Eureka has an option agreement with Heli Dynamics Ltd. and Panarc Resources Ltd., for a 100-percent interest in the property.

The TAK property covers1,695 hectares in Yukon’s Dawson Range gold belt, about 120 kilometers southeast of Dawson City and 20 kilometers northeast of Goldcorp’s Coffee Project. The company acquired a 100-percent interest in the property in January 2017.

Eureka ‘s phase one exploration program at TAK began in February 2017 and consists of ground magnetic and VLF electromagnetic surveys. These results, alongside of a recent review of the historical data, prioritized target areas for a currently planned 2-phase exploration program anticipated for the spring/summer of 2017. 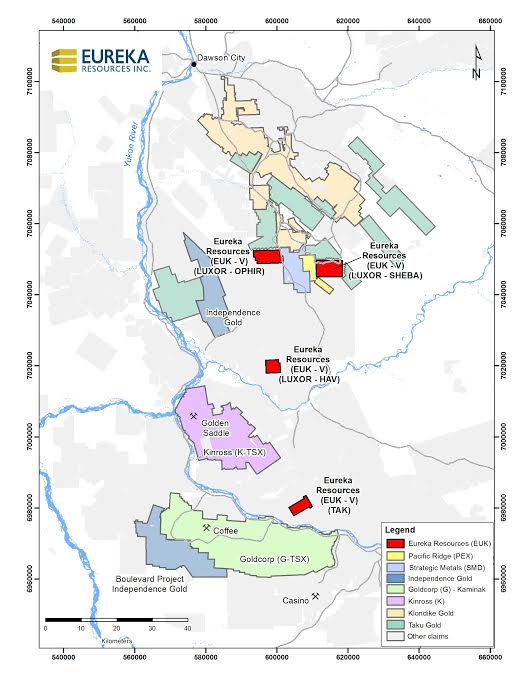 First staked by a prospector in 1979 looking for a potential source of the multi-million-ounce Cariboo placer gold rush, the FG Project covers about 10,400 hectares and is located 100 kilometers east of Williams Lake in the Cariboo Gold District of central British Columbia. The property is under option to Canarc Resource Corp. which can earn up to a 75-percent interest in the property.

More than $15 million in exploration activities has been carried out on the property including 50,000 meters of historical drilling in approximately 450 drill holes and 300 meters of underground workings. 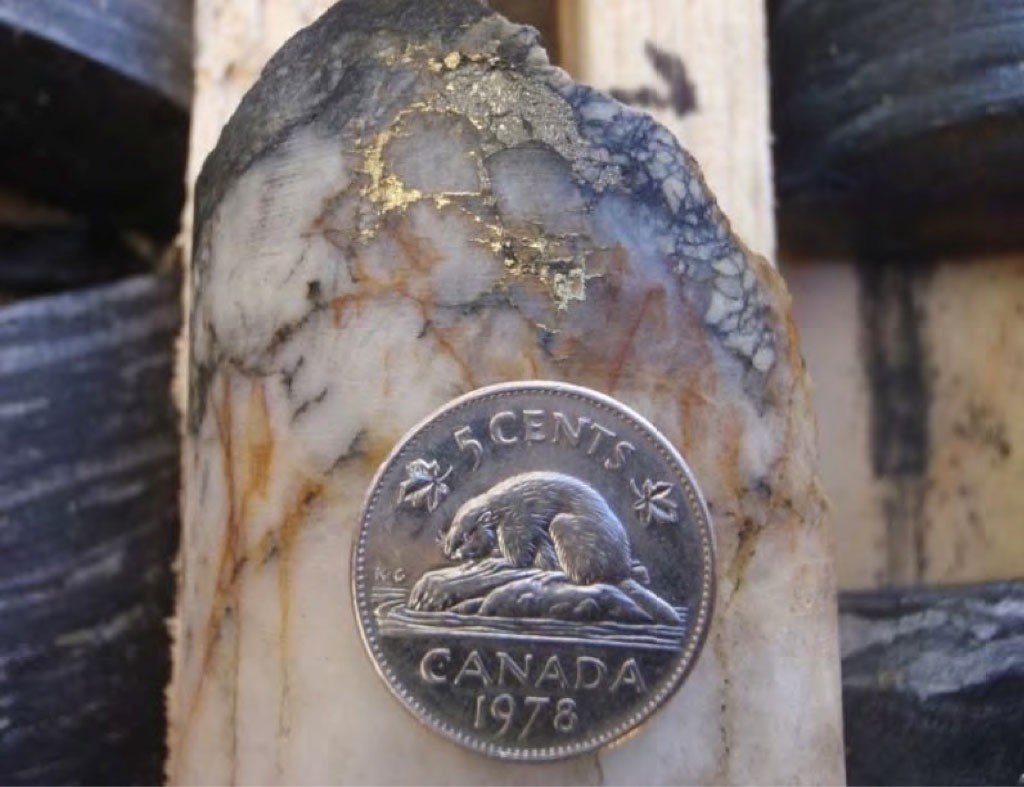 Located near a number of operating mines, the Gold Creek project is about eight kilometers northwest of the Spanish Mountain deposit. The Spanish Mountain deposit has reported resources of 238 million tonnes grading .46g/t for 3.5 million ounces in Measured and Indicated and an Inferred resource of 311 million tonnes at .35 g/t for a further 3.5 million ounces. Eureka has the option to earn up to a 100-percent interest in the property through an agreement with Bullion Gold Resources Corp.

The Gold Creek Project has access to excellent local infrastructure, service centers and low-cost grid power. The host lithology of the property is similar to the Sediment Hosted Vein (SHV) type deposits found at both Eureka’s FG property and the Spanish Mountain deposit. SHV type deposits are some of the world’s largest gold deposits.

Drilling in 2008 and 2011 identified prospective zones for further exploration including a gold-rich zone with sample values up to 13.4 g/t gold.

The Gemini Lithium Project covers a total of 2,000 hectares and is about 10 kilometers east of Lida, Nevada. The Lida Valley is located 40 kilometers southeast of the lithium-rich Clayton Valley—home to the only producing lithium mine in North America.

Eureka has an agreement with Nevada Sunrise Gold Corporation for the right to acquire a 50-percent participating interest in the Gemini Project.

Clayton Valley lithium brines are known to accumulate in faulted sub-basins. The Gemini Project hosts two faulted sub-basins (Gemini West and Gemini East) situated approximately seven kilometers apart and interpreted to be hundreds of meters deep. The Lida Valley has a similar geological setting to Clayton, including late Miocene felsic volcanic tuffs (the Esmerelda Formation) adjacent to the Gemini Project which may have been the source of lithium for these two sub-basins. Recent gravity surveys indicate these areas have the potential to host lithium-bearing brines.

In February 2016, Eureka and Nevada Sunrise Gold announced the preliminary results of a time-domain electromagnetic (TDEM) survey of Gemini West and Gemini East. A reconnaissance moving-loop TDEM survey over the two sub-basins detected zones interpreted to be conductive brines 150 meters to 250 meters below the sediments at surface. Several isolated strong conductive zones were interpreted at depths from 400 to 600 meters.

The next phase of exploration will be testing the conductive zones by drilling to determine the extent and lithium content of the interpreted brines.

Michael Sweatman is a Chartered Professional Accountant and has operated MDS Management Ltd., a Vancouver-based management consulting company, since November 1992. He obtained his Bachelor of Arts degree in economics and commerce from Simon Fraser University and gained his CA designation in 1982. He is also a member of CPA British Columbia and the Institute of Chartered Accountants of the Yukon Territory. Sweatman has served as a director and officer of a number of public companies over the past 25 years and is currently a director and Chairman of Nevada Sunrise Gold, a Director of Marifil Mines and Red Hut Metals, formerly a Director of Mega Precious Metals, which was in 2015 acquired by Yamana Gold, and Cortez Gold, which in 2015 announced its agreement to be acquired by Starcore International.

John Kerr graduated from the University of British Columbia in 1964 with a Bachelor of Applied Science in geological engineering. As an exploration geologist his expertise is epithermal and sedex-hosted precious metal deposits in the southwest United States, strata-controlled gold deposits and porphyry copper/gold/molybdenum deposits of the western Cordillera, and volcanogenic massive sulphide (VMS) deposits in all areas of North America. Successful ventures include recognition and discovery of the Santa Fe gold mine, identification of the Calvada gold mine, and discovery of the Mindora gold/silver deposit, all located in Mineral County, Nevada. He is also credited with early identification of two VMS deposits at the Rambler mine in Newfoundland and recognition of the Frasergold deposit in British Columbia. Kerr has served as a director of numerous public companies and is currently a director of Quaterra Resources Canyon Copper and Bravada Gold.

Kristian Whitehead has served as a director of Eureka since July 2011, and has over 11 years of exploration experience, including more than two years of mine site exploration. He has most recently worked as a consulting geologist for Kootenay Silver, Copper Creek Gold, served as an officer of Fortunate Sun Mining in 2012, and has consulted for Taseko Mines at the Gibraltar Mine and for Fire River Gold Corporation at the Nixon Fork Mine during 2010-2011. Whitehead worked on the Frasergold Project during Hawthorne’s exploration programs of 2007-2008. He owns and operates Infiniti Drilling, servicing clients with remote drill and geological support services in the Yukon and NWT, B.C., Alberta, Saskatchewan, Manitoba, and Mexico.

In June 2015, the Company appointed veteran geologist and mining analyst Douglas A. Leishman, P.Geo, FGAC, ARSM, BSc, to its technical advisory board. Leishman is a graduate of the University of London, Imperial College, where he attended the Royal School of Mines and completed a degree in mining geology in 1981. Early in his career, Leishman served in positions of responsibility at Canadian Superior Exploration and Esso Minerals Canada. He was senior mining analyst of Yorkton Securities Inc. from 1990 to 2000, covering junior exploration companies primarily focused on exploration in the Americas; after Yorkton from 2001 to 2005 he was the director of geology and exploration for Endeavour Financial Ltd., a financial advisory firm focused on the mining industry. He has served as a director of Southern Arc Minerals Inc., Fortress Minerals Corp. and Terrane Metals Corp. Leishman has been a registered member of the Association of Professional Engineers and Geoscientists of British Columbia since 1994 and a fellow of the Geological Association of Canada since 1985.