This Cross River Ventures profile is part of a paid investor education campaign.*

Having the right team to push the development and exploration of mineral-rich assets sets a great mining company apart from the good ones. Particularly for precious metal properties, striking gold can sometimes be half the battle.

The company’s flagship property is the McVicar Lake gold project, which spans over 11,500 hectares in the Lang Lake Greenstone belt in Northwest Ontario. The rest of Cross River Ventures’ portfolio currently consists of the Manitou project, the Fuchsite gold project, the Tahsis copper-gold project and its four properties in the Uchi Belt, including the Dent-Jackson project. 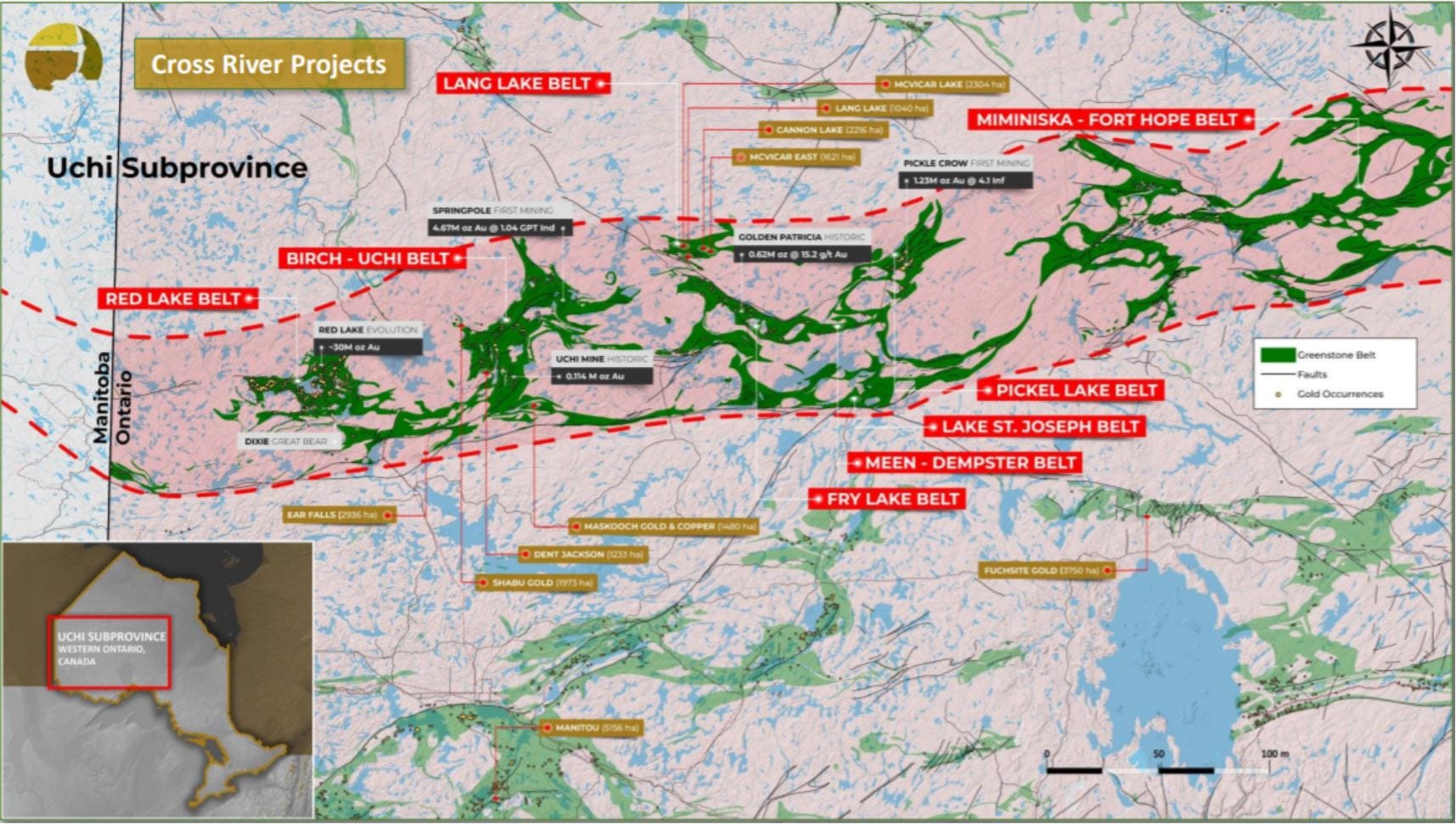 Exploration plans for 2021 include continued compilation efforts of historical data and assessment of all projects, acquisition of remote sensing data through LIDAR imagery and airborne magnetic surveys, field work and analytical sampling. Projected drilling phases are to begin at priority projects starting at the end of the year.

The flagship McVicar gold project has a dominant land position of over 11,500 hectares in the Lang Lake Greenstone Belt, approximately 80 kilometers west of Pickle Lake, Ontario. The project covers all the major fertile structural and geologic elements of the belt and leverages an excellent mining-friendly jurisdiction and resource-rich conditions.

Cross River has uncovered over 26 mineral occurrences on the property despite its limited testing and drilling history. Earlier developments revealed several potential structural splay zones with discovery possibilities and a 2002 discovery of a smoky-grey quartz vein grading 827.4g/t gold.

The property hosts valuable geophysical characteristics that point to potential gold systems across its mafic-felsic contacts, shear zones. Fold hinges and iron formations. These elements on the McVicar land position suggest that its untested traps and structures are highly-prospective for new high-grade gold discoveries.

The Fuchsite Lake project is located 20 kilometers north of Armstrong, Ontario, and comprises approximately 3,750 hectares. The property’s main target is an Archean shear zone within deformed and altered ultramafic and mafic volcanic rocks. This type of geophysical conditioning points to potential gold mineralization that mimics some world-class gold camps in the superior province of Ontario and Quebec. 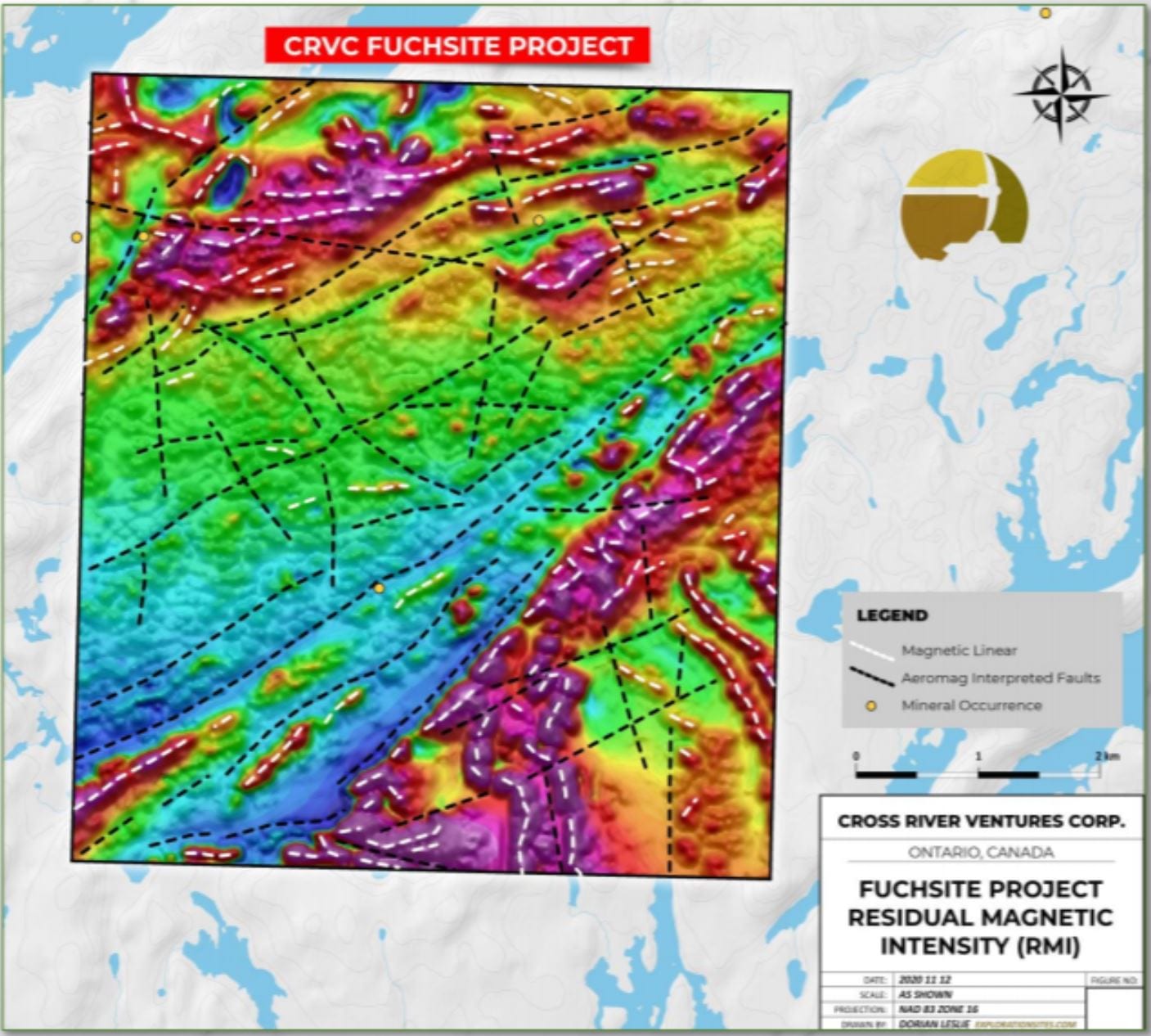 In 2020, Cross River conducted a high-resolution airborne magnetic survey at the Fuchsite gold project, which successfully defined and extended a key structural zone associated with the project’s Lette gold and base metal prospect. The prospect remains relatively unexplored, which provides Cross River a first-mover advantage in exploring and developing this highly prospective project.

The Tahsis copper-gold project is a 4,866 hectare gold exploration property located in Northern Vancouver Island, British Columbia, Canada. The property leverages a rich exploration history with past production at the nearby Zeballos gold camp, which produced 287,811 ounces of gold and 124,700 ounces of silver from 13 deposits between 1930 and 1948. The geology of the Tahsis project is similar to the Zeballos camp. 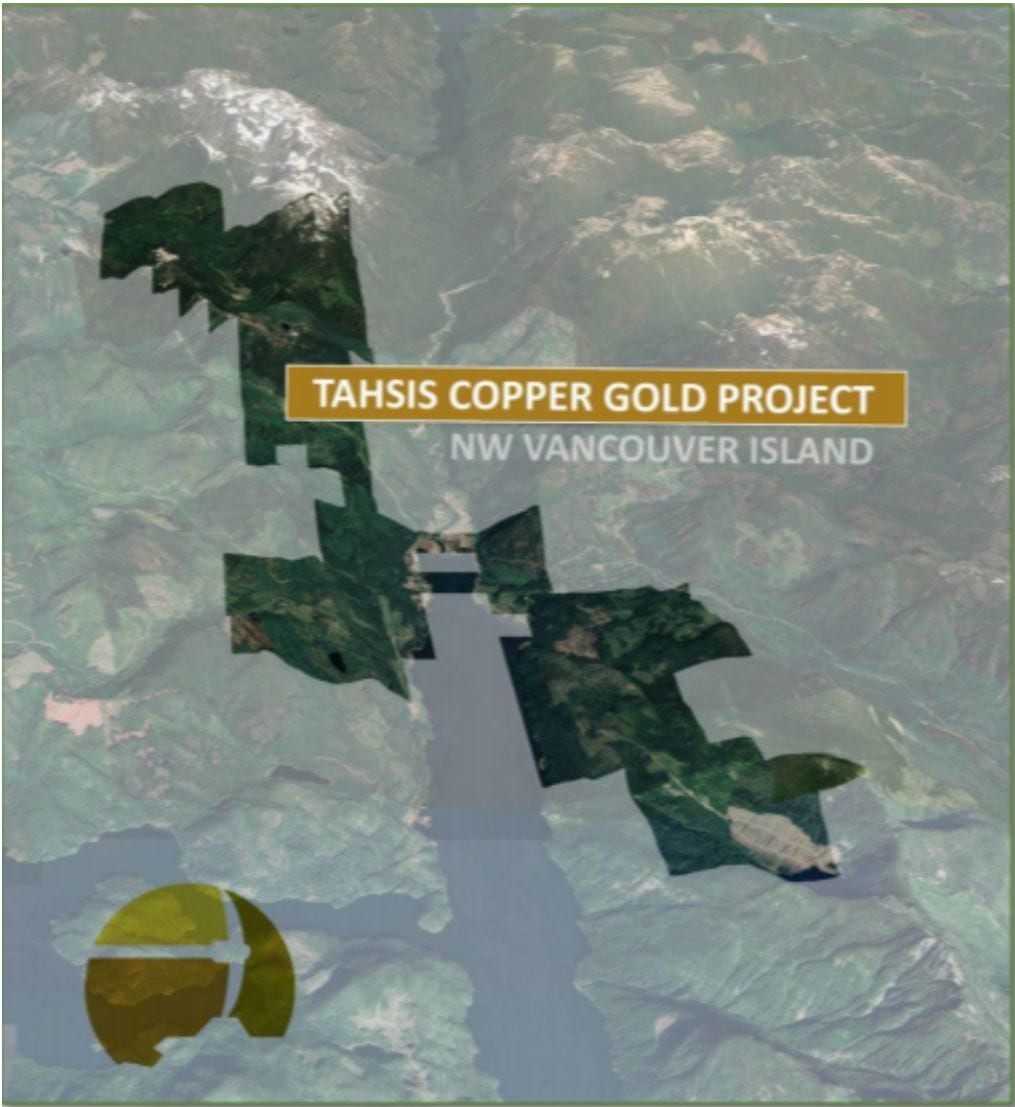 Cross River has discovered three target areas at Tahsis, which it intends to assess for subsequent excavator trenching. Cross River Ventures owns an option to acquire 100 percent undivided interest in the Tahsis property.

Historic production has reported drill intercepts of 216.85 g/t gold over 0.3 meters and 15.5 g/t gold over 6.9 meters. The company is currently compiling historical data and interpreting property geology to further develop and analyze the project.

Alex Klenman is an experienced junior mining executive whose career spans over 30 years of experience in the private and public sectors. Over the past decade, he has held leadership roles with numerous publicly traded resource companies, including senior officer and director positions with Nexus Gold, Leocor Gold, Azincourt Energy, Arbor Metals, Manning Ventures and others. As a consultant in the past, he has also worked with Roxgold, Forum Uranium, Integra Gold and Midnight Sun Mining, among others. Klenman began his professional career in television broadcasting, which evolved in the late 1990s into communications, finance and marketing roles principally for publicly traded companies.

John Fraser has over 20 years of experience in the Canadian capital markets. Fraser worked as an investment advisor at several Canadian brokerage firms with a focus on the mining sector. Since transitioning to the business’s public company side, he has held board positions and advised several mining and technology companies.

Alex Tong is a highly qualified finance professional with extensive senior management experience in the mining space. He has worked directly with companies operating in North America and Africa and was most recently the Director of Finance at Lucara Diamond. Before Lucara, Tong held senior finance roles with development resource public companies Energy Metals and Novagold Resources, where he was responsible for achieving operational performance, leading mergers and acquisitions and involved with various financing strategies. Tong is a Chartered Professional Accountant who articled with Deloitte LLP, where he managed a portfolio of clients in both the Canadian and US public markets, primarily in the brokerage and mining industry.

Lori Paslawski is an economic geologist specialized in field-based exploration for base and precious metal deposits. Her expertise includes three-dimensional lithological/structural/ore deposit modeling, project evaluation and grassroots through in-mine exploration targeting. She has worked in VMS, epithermal gold, orogenic gold and structurally controlled silver-zinc-lead districts and was instrumental in the target generation, delineation and expansion of the Shovelnose gold discovery.

Lori completed her MSc at St. Francis Xavier University, where she worked in the Rio Tinto VMS district in Spain. She is currently a project geologist with Vector Geological Solutions.

Dr. Rob Carpenter is a professional geoscientist with more than 30 years of corporate and technical mineral exploration experience. He has founded and played critical roles in several successful junior mining companies, including Kaminak Gold Corporation. Dr. Carpenter led the Kaminak team as CEO from inception in 2005 through acquisition, discovery and maiden resource calculation of the multi-million-ounce Coffee Gold Project, Yukon. Goldcorp acquired Kaminak in 2016 for over US$500 million.

Dr. Alan Wainwright is an economic geologist with over 20 years of mineral exploration and research experience in North America, South America, Europe and Asia, focused on base metals and gold. He was the H.H. Spud Huestis Award co-recipient for the Coffee gold discovery.

Daniel Macneil is an economic geologist specializing in precious and base metals with over 19 years of experience from Continental-scale project generation to in-mine resource expansion in various geological settings in the Americas, Europe, Eastern Europe and the Middle East. His expertise includes project evaluation, target and opportunity identification, exploration strategy, district entry strategy, business development, strategic evaluation of geologic terranes and execution of target testing. MacNeil is the founder of Vector Geological Solutions.

The information contained here is for information purposes only and is not to be construed as an offer or solicitation for the sale or purchase of securities. Readers should conduct their own research for all information publicly available concerning the company. Prior to making any investment decision, it is recommended that readers consult directly with Cross River Ventures and seek advice from a qualified investment advisor.