Beauce Gold Fields Inc. (TSXV:BGF) is a gold exploration company focused on placer to hard rock exploration in the Beauce region in southern Quebec. Following the model used in the Klondike and Cariboo gold districts, Beauce Gold is determined to trace the placer gold back to its source and incite another gold rush in Quebec.

The Beauce region was the site of Canada’s first gold rush in the 1860 and holds the largest historical placer gold deposit in eastern North America. The property hosts numerous historical placer gold mines that were active between the 1860s and the 1960s.  Despite prolific gold mining activities, the Beauce has received sporadic attention from mining companies and remains severely underexplored.

Beauce Gold believes that the area has the potential for major discoveries to spark a modern gold rush and attract the attention of major mining companies such as Goldcorp (TSX:G), Kinross (TSX:K), Barrick Gold (TSX:ABX), Newmont Mining (NYSE:NEM) and Osisko Gold Royalties (TSX:OR) who have all made investments in junior mining companies in the Klondike and Cariboo districts.

Recent exploration discoveries such as textural observations (angularity) of gold nuggets along with geophysics surveys confirming that a fault extends over 4.5 kilometers and is in alignment with old mines, indicates a close proximity to a bedrock source of gold.  The company intends to conduct additional exploration on the project in the near term to generate drill targets.

Operating in an Overlooked Area of Quebec

The Beauce district is located in southern Quebec and experienced a gold rush in the late 1800s. Like the Klondike and Cariboo gold rushes, the initial interest in the area died off. Recently there have been significant discoveries made such as the Whitegold deposit in the Klondike and Cariboo gold districts that have attracted major gold companies like Goldcorp, Kinross, Barrick Gold, Newmont Mining and Osisko Gold Royalties, creating renewed interest in these areas.

Many of the discoveries made by these companies in the Yukon were due to the efforts made to find the sources of placer gold. Beauce Gold is applying a placer to hard rock exploration model to find the source of the placer gold in the Beauce district. The company believes that they are close to finding that source that could capture the attention of the majors and spark another gold rush in the area. 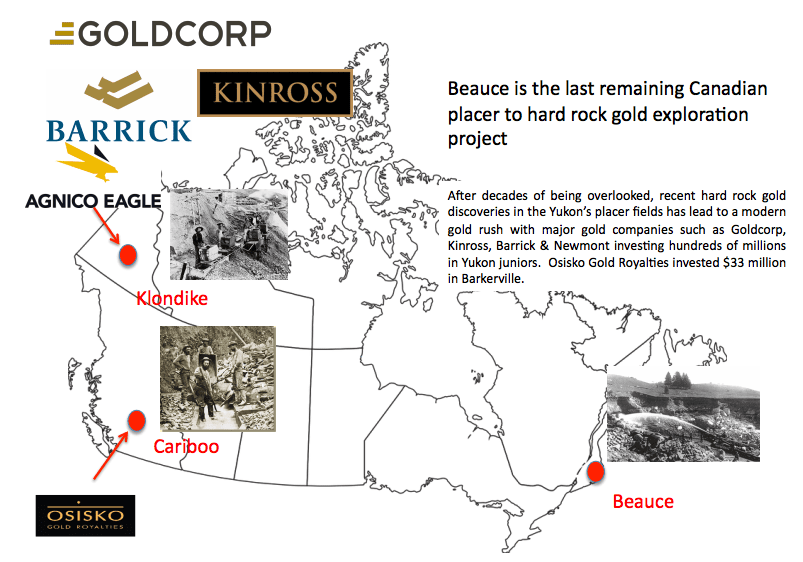 Until 1854 Quebec operated under a seigneurial system, which is an institutional form of land distribution during the New France era at a time when Canada was a French colony.

After Canada was ceded to Britain in 1763, new British laws respected the private agreements and the property rights of francophone society, and the seigniorial system was maintained.

It was abolished in 1854, however, following the Beauce gold rush of the 1860s, descendants of the dominate seigniorial families in the Beauce and southern Quebec were granted by the Province of Quebec, rights to gold and silver.   This caused many property disputes with local landowners, mining companies and seigniorial descendants.  For over a hundred years this prevented major investments in mineral exploration and limited gold mining operations.  It was only in 1985 that the Provincial government took back mineral rights from property owners and made the region of southern Québec open to exploration to mining companies.

Beauce Gold Fields is the first company to completely cover the historical placer gold deposit and to hold an area of significant claims to search for a hard rock source. The company has also received strong support from the local community and has secured written agreements from the surrounding landholders to conduct gold exploration on their properties. To ensure continued property access, the company has purchased the real estate of the former Beauce Placer Gold company that operated a gold dredging operation in the 1960s.

The 176-acre Beauce Gold Fields project is comprised of 152 wholly-owned claims that host a six-kilometer-long unconsolidated gold-bearing sedimentary unit. The property also hosts numerous historical gold mines that were active between the 1860s and the 1960s.

The Beauce Gold Fields project is located near Saint-Simon-les-Mines in the Beauce region in southern Quebec. The property is an hour’s drive south of Quebec City and 15 kilometers north of St-George de Beauce. The project is accessible year-round by paved and gravel roads. 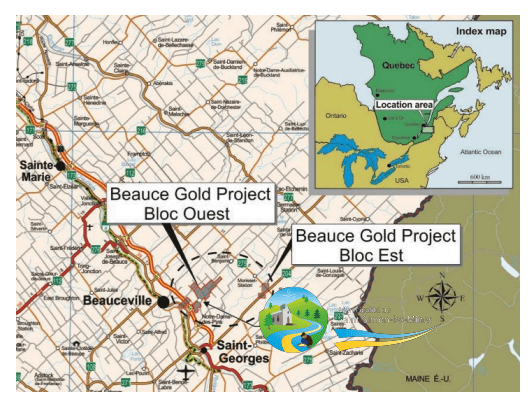 Until recently, the economic interest of mining companies was focused on evaluating the mining potential of the historical placer deposit rather than exploring for the source of the placer gold.

Beauce Gold Fields was formed following a spin-out from a parent company HPQ Silicon (TSXV:HPQ). HPQ, formerly known as Uragold, acquired over time the Beauce claims as we know them today. In 2013, Uragold was evaluating the size of the historical placer gold deposit and discovered that this was not a pre-glacial alluvial deposit but rather an auriferous till and saprolite. The delicate nature of the gold grains drilled up from the auriferous till as well as quartz markings suggest a close proximity source of gold.

In May 2017, Beauce Gold completed a geophysical study on the property and identified a significant fault beneath the Beauce Placer Company’s former placer gold mining operation. The fault could be a possible explanation as to the source of the placer gold in the region. The discovery was followed up with a geophysics program to delineate the boundaries of the fault. The program consisted of two audio-magnetotelluric surveys, two electrical resistivity tomography (ERT) surveys and multiple gravimetric surveys.

In April 2019, Beauce Gold completed a large-scale gravimetric survey over the fault. The results show that the fault extends over 4.5 kilometers and is in alignment with old placer gold mines. The following month, the company started follow-up exploration work on the geophysical anomalies detected in the 2017 and 2018 surveys. Through its exploration work, Beauce Gold hopes to identify a possible in-situ gold source.

In August 2019, Beauce Gold announced the results of its geoelectric survey at its property. The survey indicates the presence of a structural discontinuity that is associated with the major fault outlined in 2017 and 2018. This structure has been located beneath former placer gold production shafts and near the discovery sites of the largest gold nuggets in the Gilbert Rover valley.

“The results of the geoelectrical tomography survey is another solid piece of evidence that narrows our exploration efforts to find the bedrock source of the gold-bearing placers of Saint-Simon-les-Mines,” said Beauce Gold President and CEO Patrick Levasseur. “Our rock outcrop sampling program is currently underway and is proceeding exceedingly well. We should be able to provide an updated shortly.” 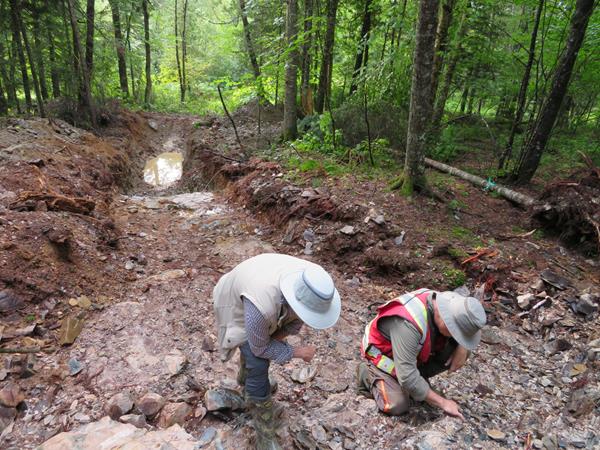 Excavating, as part of a trenching program, cut into a faulted geological structure on the St.-Simon-les-Mines property, confirming the presence of a significant geological fault that was identified in 2017 and 2018. The trenching also unearthed a nineteenth-century placer gold mining shaft.

The faulted contact corresponds to a 35-centimeter-thick zone of non-cohesive materials rich in quartz fragments. The volcaniclastic rocks, present south of the fault, are highly fractured. This structure could correspond to the fault detected by the AMT survey of 2017 and dips to the south. On the edge of the fault, the volcanoclasites are extremely altered by the injection of veins of quartz-iron carbonates associated with a variable proportion of sulfides. The zone of quartz-carbonate veins has a thickness of 2.5 meters to three meters.

In October 2019, Beauce Gold completed its 30-square-kilometer sampling and geological mapping program. More than 200 rock samples were taken for analysis and results are pending.

Beauce Gold intends to conduct additional exploration on the property to generate drill targets. The company is also currently awaiting assay results from its 2019 sampling and geological mapping program.

For the last 10 years, Patrick Levasseur was the former president of Uragold and HPQ Silicon. He has 10 years of experience as an investment executive with various Canadian Securities firms (ScotiaMcLeod, Research Capital and Laurentian Bank Securities). Previously, he worked as a sales executive and Director of Sales for major hotels. During that time, he was the Founder and President of the Quebec Hotel Sales & Marketing Association. He is also the owner of Ice Age Gold Corporation, a mineral prospecting company.

For the last 20 years, Bernard Tourillon has held senior-level executive positions with extensive finance, marketing, administration and public accounting experience in diverse industries including exploration and mining companies. Currently, he is the President and CEO of HPQ Silicon. He has participated in fundraising activities and financial transactions worth over $20 million. Since 2010, he has participated in the transformation of HPQ Silicon from an exploration corporation into a high-purity silicon company.

Lam Chan Tho is both an engineer and a lawyer who has been practicing for over 30 years in commercial and corporate law with a focus on civil engineering in the energy sector. He is also an entrepreneur who is a shareholder of the tallest vertical windmill power station and a real estate developer. He is a pillar in Canada’s Vietnamese community and is recognized for his humanitarian causes as well as national and international social activism.

Marcel Drapeau was previously an accountant and was a lawyer for over 43 years. He has practiced in the commercial, corporate and securities law fields. During that time, he served as a director of numerous companies and acted as a business consultant in various corporate dealings. During the last 20 years, Drapeau has worked mostly with public corporations and securities regulatory organizations and exchanges.

Ann Levasseur is a Vice President and Investment Advisor at a bank-owned securities firm. She is currently Treasurer for the National Council of Women of Canada.

Francois Rivard is currently the CFO of HPQ Silicon. He has 20 years of experience working in finance and accounting for private and publicly traded companies such as Group Dynamis, Group DTM, Socanav and Afri-Can Marine Minerals.

Dr. Marc Richer-LaFlèche is a professor of geology and research scientist at INRS.

The information contained here is for information purposes only and is not to be construed as an offer or solicitation for the sale or purchase of securities. Readers should conduct their own research for all information publicly available concerning the company. Prior to making any investment decision, it is recommended that readers consult directly with Beauce Gold Fields Inc. and seek advice from a qualified investment advisor.