The Company is establishing itself as a low-cost, top-tier molybdenum producer through the advancement of its CuMo Project, ranked among the top five most profitable mines. The project located near Boise, Idaho is potentially the world’s largest and lowest-cost primary molybdenum mine. The property also hosts the third largest copper deposit and the largest silver deposit in the U.S. Critical minerals, tungsten and rhenium, which have been deemed necessary to the U.S. economy and national defense by the United States Geological Survey, are present in the CuMo deposit. CuMo is projected to become the largest source tungsten and rhenium in the U.S.

An updated PEA released in April 2018 showed an after-tax NPV (5 percent) of US$5.7 billion, and IRR of 25 percent and an average cash flow of US$664 million over the first five years.

The global market for molybdenum is experiencing strong fundamentals. Demand for the metal is expected to grow at a CAGR of 4.6 percent between 2018 and 2025 on robust demand for steel from substantial infrastructure initiatives across the globe. At the same time, supply is constrained by aging existing production and changes in the financials, infrastructure and geopolitical implications of planned projects.

American CuMo’s Calida Gold, located in eastern Idaho’s historic mining region, hosts significant gold, silver and copper mineralization. The property has been extensively explored for the past thirty years. Exploration has included drilling 29 holes in 1983 as well as thorough trenching and sampling.

American CuMo Mining is led by a senior management team of mine development professionals and a technical team with more than 260 years of feasibility-level experience including metallurgy, mill and mine design, as well as environmental sustainability and permitting.

American CuMo’s wholly-owned CuMo Project is located 35 miles northeast of Boise, Idaho at the southwestern end of the Idaho-Montana Porphyry Belt. The property consists of 184 contiguous mining lode claims covering an area of approximately 3,720 acres and 38 patented claims covering a total area of 740 acres, located in the historic Boise Basin mining district – an area in which gold was discovered in 1862 and exploration and mining has been taking place continuously since that time.  The CuMo deposit is classified as a porphyry molybdenum-copper deposit. The vast size of the CuMo deposit has had analysts place it among the top five most profitable mines and gives the project an economic scale equivalent to or exceeding that of high-grade molybdenum deposits such as Henderson or Climax. 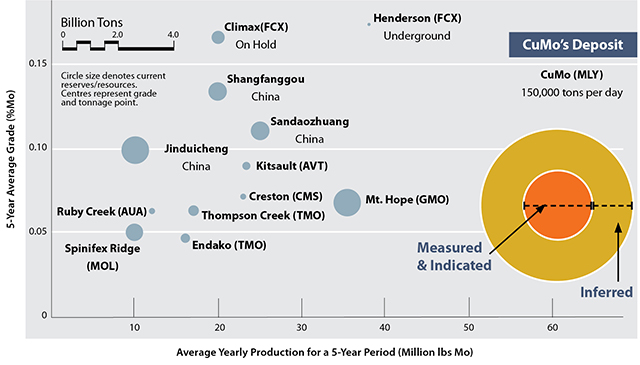 The region hosts excellent infrastructure including major road and rail network access, electric power and water. Exploration and mining can be conducted year-round, due to its proximity to an established road network. The area is serviced by the Idaho Power Company and the nearest rail line is the Idaho Northern & Pacific line that runs through the town of Horseshoe Bend, near CuMo’s warehouse and its center for field operations. Equipment, supplies and services for exploration and mining development projects are available at Boise as well as a trained mining-industrial workforce. 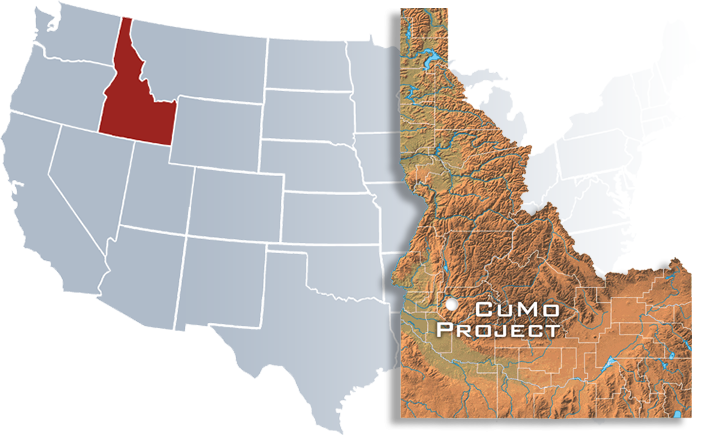 Based on the data compiled from the 2005 – 2012 drill campaigns, a Measured, Indicated and Inferred resource estimate for the project was determined in the November 2015 independent NI 43-101 Technical Report (see table below). 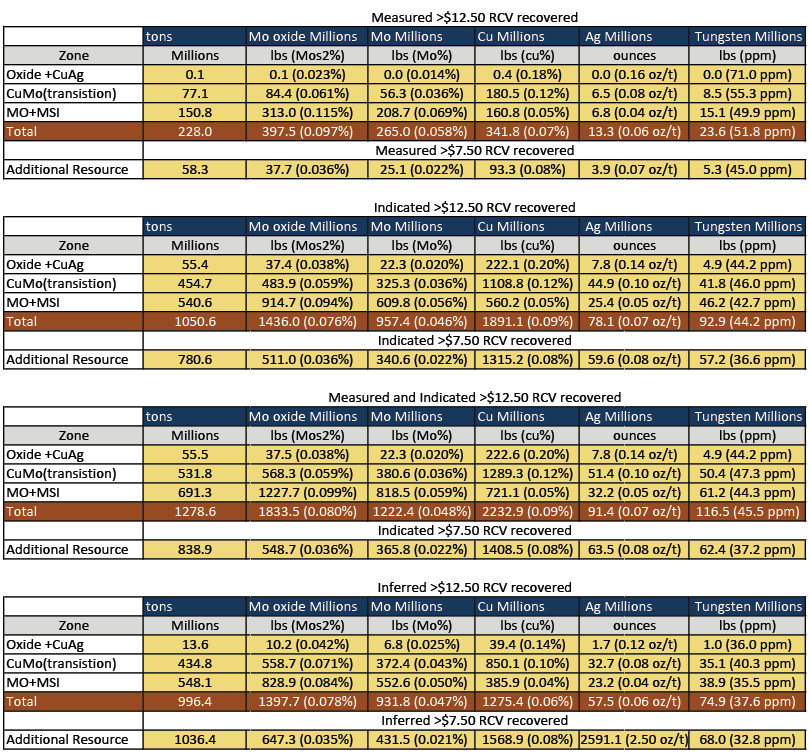 Could, potentially, stand among the top 5 most profitable mines.

The diversity of metals found at CuMo occurs in two distinct layers: the upper half of the CuMo deposit contains higher grades of silver and copper compared to molybdenum while the lower half is rich in molybdenum, with lower grades of silver and copper. The total recoverable value of both layers is what gives the CuMo Project such excellent economic potential. The copper value alone is expected to contribute from 25 percent to 30 percent of revenues, helping to reduce overall operations costs.

With intensified focus on U.S. critical minerals exploration and development, CuMo is qualified to be prioritized by the U.S. government as a sustainable source for rhenium and tungsten. Throughout 2017-18, U.S. executive orders and legislative actions have renewed national commitment to streamlining permitting and approval processes for strategic mineral development and production in the U.S. CuMo is positioned to benefit from these initiatives. 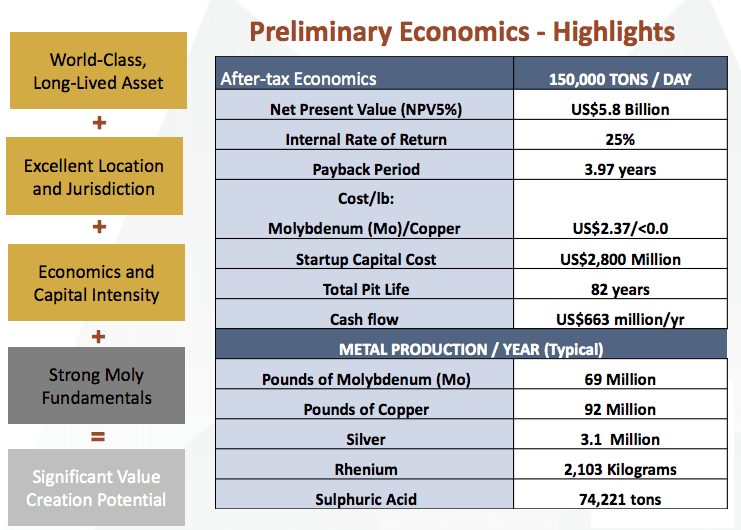 American CuMo announced in January 2017 that the use of Ore-Sorting technology at the CuMo deposit has the potential to increase the value of direct processing feed by up to 270 percent. Ore-Sorting uses state-of-the-art x-ray technology to identify and separate rocks that contain processing grade minerals from those that do not. 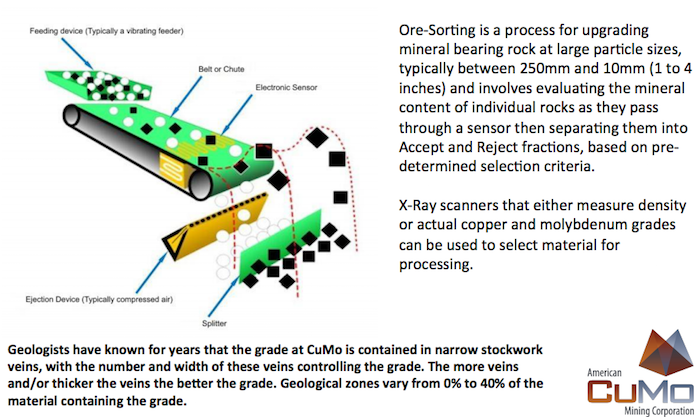 Ore-Sorting technology may allow the CuMo Project to be mined at large tonnages (200K to 300K tpd) while requiring only smaller tonnages (50K to 100K tpd) to recover most of the metals—resulting in a significant increase to profitability and reductions in capital and operating costs. The Company estimates this could lead to a CAPEX savings of between US$800 million and US$1 billion.

“The updated resource calculation and our most recent Preliminary Economic Assessment combined with these excellent Ore-Sorting results confirm again that CuMo is able to compete on a cost-to-produce basis with not only primary molybdenum producers, but also with copper projects producing molybdenum as a by-product,” said American CuMo President and CEO Shaun Dykes. 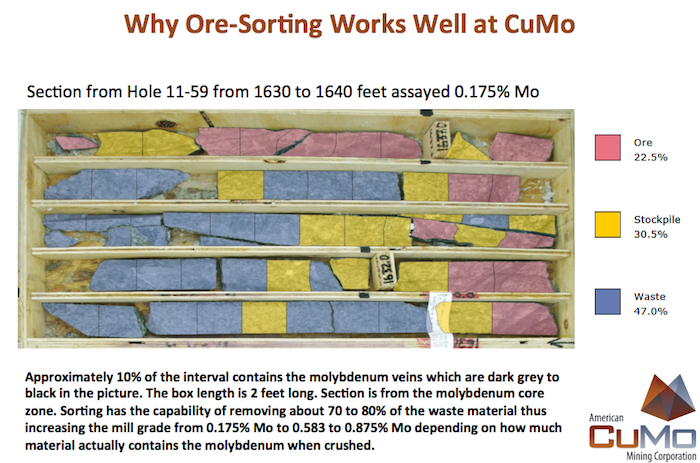 Ore-Sorting is the first of several optimizations in preparation for Pre-Feasibility and Feasibility Studies on the CuMo deposit. American CuMo is finalizing the incorporation these results into the updated 2018 PEA. A series of large bulk samples are planned for feasibility accuracy level metallurgical testing. The results of both the ore-sorting and metallurgical test work will then be used to complete a feasibility-level economic study.

The CuMo Project sits in the historically mined Grimes Creek Basin.  The project area lacks any endangered species or plant life and is not located in a wilderness or pristine area, but a heavily disturbed and mildly contaminated area of historic mining and logging. Logging and mining activity over the past 100 years has contaminated the creek, according to the Idaho State Department of Environmental Quality.

North American project development is governed by three levels of increasingly stringent analyses to evaluate the environmental impacts of proposed projects. The CuMo Project and exploration team completed the Lower Level Categorical Exclusion (CE) in 2011 and have received the necessary Middle Level Environmental Assessment (EA) permits twice and are in the process of having them renewed a third time,  to proceed with advanced exploration and site analysis. American CuMo continues to gather the required scientific information to bring the project to the highest level Environmental Impact Statement (EIS). 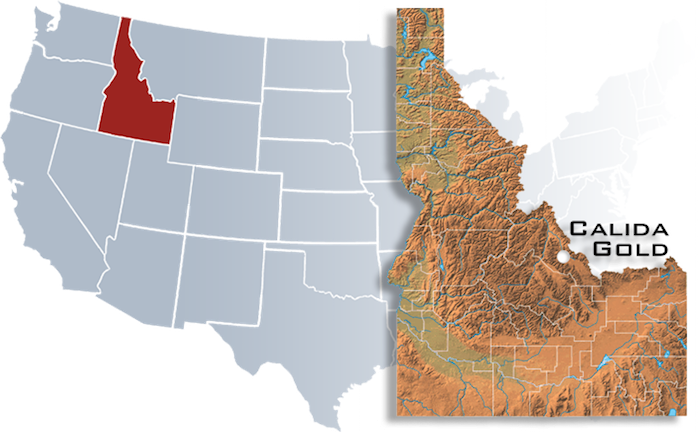 Extensive past exploration at Calida includes trenching, sampling as well as 29 drill holes completed in 1983. Highlights from those results are shown in the table below.

Ten mineralized veins hosting oxide and sulfide ore minerals have been identified to date, ranging in size from 1.5 meters to 30 meters in width and up to 4,267 meters in length.  American CuMo has examined the data and determined a target area measuring 80 to 120meters wide, 1,400 to 1,600 meters long and 400 to 600 meters deep that contains gold with copper-bearing mineralization. 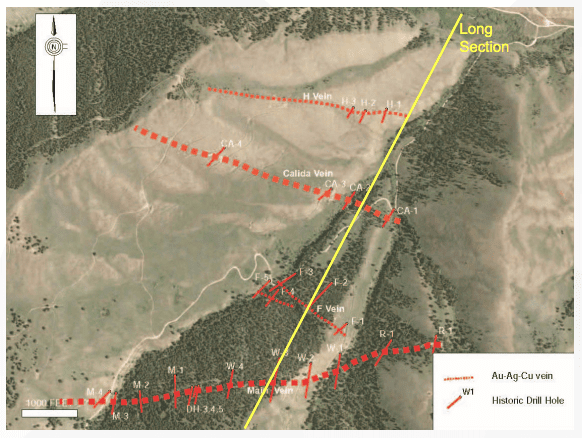 Shaun Dykes has 40 years of diverse experience in all aspects of exploration and mine development at varying stages of development from grass roots to full production. He has been involved in the evaluation, exploration and/or development of some of the world’s major mineral deposits.

Dr. John Moeller – Chairman of the Board

Dr. John Moeller has 40 years of diverse experience in providing environmental consulting and planning. Dr. Moeller managed water quality and hazardous materials programs during a nine-year tenure at Idaho DEQ. He co-founded a state and federal interagency task force to permit a $400 million open-pit molybdenum mine in the headwaters of Idaho’s Salmon River.

Trevor Burns has 30 years of diverse experience in the financial markets. He is the President of Tiger Capital, a venture capital/investor relations firm with offices in Toronto, Singapore, and Beijing that manages a diverse and privately held investment portfolio.

Brett Kagetsu is a partner in Gowlings’ Vancouver office and Vice-Chair of the Corporate Finance and M&A National Practice Group. Brett advises mining and technology companies listed on the TSX Venture Exchange and the Toronto Stock Exchange in respect of corporate finance, securities and corporate governance matters, as well as in connection with mergers and acquisitions.

Joseph Baird has 35 years of diverse experience in providing environmental and mining legal counsel to a wide variety of New York Stock Exchange, Toronto Stock Exchange and venture capital mineral companies. He provides the expertise required to navigate the permitting and environmental hurdles as well as develop contacts through the U.S. and Idaho.

Thomas Conway has 30 years of diverse experience mainly with Newmont mining in operations, general management, environmental affairs and risk management, including serving as Newmont’s Vice President and general manager of large scale projects/mines such as Carlin and Yanacocha.

Noelle Laury has 15 years of business development and public relations expertise in both the public and private sectors. She develops and executes strategic stakeholder engagement and communication programming. Noelle consulted as a public relations lead for Albertsons, Boise Cascade, Optum Idaho, Nelnet and POWER Engineers. Her longevity and leadership as the public affairs team lead of the CuMo Project has established and grown important stakeholder relationships that are critical to advancing the Idaho CuMo’s projects.

Lisa Anderson has 20 years of experience as a seasoned political operative with expertise in identifying and shaping advocacy opportunities and strategies for both the Republican and Democratic party. She critically monitors the political state of play at the state, local and national level to leverage opportunities that engage officials with strategic initiatives. Throughout her career, she has maintained deep relationships with key Congressional offices, Administrative agencies, state and local elected officials, non-governmental organizations (NGO), and other relevant partners and stakeholders. For the past two years, Lisa has worked closely with Idaho CuMo and American CuMo management to develop and direct the Company’s strategic government relations program.

Joe Puccinelli has 10 years of project geology expertise in the exploration, documentation and advancement of six major projects in the western United States. He earned a Bachelor of Science in Geosciences (Geology Emphasis) at Boise State University. In addition to his work as a project geologist, he is Co-founder of Terra Nostra Geologic and Environmental Services.

Willis Blakeslee has 10 years of experience as an exploration geologist on copper porphyry deposits in Arizona at the Pinto Valley mine, epithermal gold deposits in Sonora, Mexico, the CuMo project since 2012, for ‘Gold Hill’ in the Boise Basin exploring more epithermal gold deposits around Quartzburg and up in the Silver Valley from 2013-2015, and for Otis Gold doing more gold exploration in Eastern Idaho since 2015. He has been instrumental in achieving milestones on the CuMo Project since 2012.

*Disclaimer: The profile provides information which was sourced and approved by American CuMo in order to help investors learn more about the company. American CuMo is a client of the Investing News Network (INN). The company’s campaign fees pay for INN to create and update this profile page, to which links are placed on Investingnews.com and channel newsletters.