This Adamera Minerals Corp. profile is part of a paid investor education campaign.*

Adamera has signed an option/joint venture agreement with Hochschild Mining on the Cooke Mountain project in Washington State. Adamera has 100% interest in the Empire Creek and Flag Hill projects. Being fully funded with over 50 drill permits, Adamera’s goal is to be successful in the discovery of a gold deposit.

The Cooke Mountain project is strategically located near Kinross’ (TSX:K) Kettle River mill, which was put on care and maintenance when the Buckhorn mine was closed in 2017. The project is home to the high-grade gold, multi-kilometer Overlook and Lamefoot trends which host multiple high-priority targets and past-producing mines.

Adamera holds a substantial land position in the Cooke Mountain area in Washington State. The project encompasses five past-producing mines: Overlook, Lamefoot, Key West, Key East and Belcher. During the 1990s, approximately 1 million ounces of gold were mined from these deposits. The property is also located near Kinross’ Kettle River gold mill which has been placed on care and maintenance.

A recent VTEM survey along with ground magnetics, detailed soil sampling and geological mapping has defined numerous high-priority targets that have been drilled. Adamera identified two significant gold producing, multi-kilometer trends on the property in its 2017 and 2018 exploration program. The Overlook gold trend rests on the east side of the project, and the Lamefoot gold trend on the west. Both trends contain numerous untested and drill-confirmed targets. 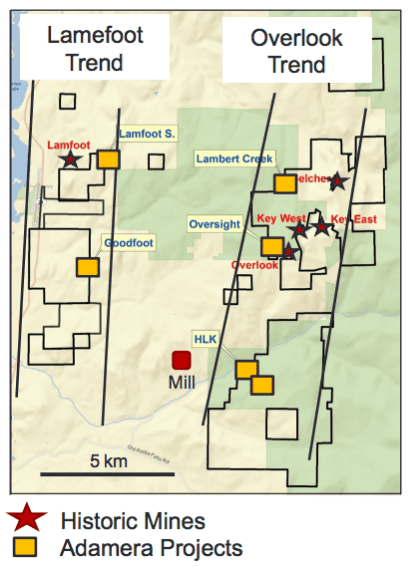 The Overlook trend hosts four past-producing mines: Key West, Key East, Belcher and Overlook. The trend extends for over eight kilometers, and Adamera has confirmed high-grade mineralization in three areas that are on strike with the trend.

Underneath the Overlook mine workings, Adamera has identified high-grade gold in the magnetite and drilling returned intercepts of 10.8 meters grading 9.6 g/t gold and 2.1 meters grading 9.9 g/t gold. The 10.8-meter intercept was drilled at a depth of 209 meters. The company has developed a 3D model of the old workings of the mine to determine the best way to test the extent of the mineralized horizon and to generate new exploration targets.

The company has also identified shallow, high-grade gold veins throughout the Overlook trend. At the Oversight target, Adamera recovered samples grading up to 69 g/t gold. Drilling of the veins in 2018 returned intercepts of 1.1 meters grading 9.3 g/t gold and 2.8 meters grading 6.5 g/t gold.

In 2019, Adamera intersected 10.57 meters grading 2.5 g/t gold including two intervals grading 10.2 g/t gold and 11.2 g/t gold. The results indicate that this new gold trend falls within north-northeast trending IP anomalies and that the deposit is open to the north.

“This is a significant result. The information from our last three drill holes confirms a new north-northeast trending gold zone situated east of the Overlook mine in an area untested by drilling. Based on this information, we will now set out a drilling plan to test the extent of the zone,” said Adamera President and CEO Mark Kolebaba.

Adamera has recovered high-grade gold mineralization that extends from the Key West mine, which is approximately one kilometer north of the Overlook gold mine. Drilling has returned intercepts of one meter grading 4.5 g/t gold, 2.3 meters grading 3.9 g/t gold and 1.07 meters grading 19.4 g/t gold.

The Lamefoot trend is six kilometers west of the Overlook trend and extends for seven kilometers. The historic Lamefoot gold deposit lies near the trend’s northern boundary. Adamera has identified two high-priority target areas in the Lamefoot trend: Lamefoot South and Goodfoot. The company has completed an extensive work program over the trend that included ground magnetics, electromagnetics, an IP survey and geochemical surveys.

“The Lamefoot South property is ready to drill. Multiple layers of exploration data corroborate high priority targets proximal to a high-grade past-producing gold mine. There is an old saying that states, the best place to look for a mine is close to a mine and in this case, our data appears to reflect that possibility. Our top target is a strong magnetic and IP target with coincident gold and arsenic soil anomalies. The target is less than 300 meters from the Lamefoot mine, within the mineralizing structure and along the same or similar lithological contact. In my opinion, we couldn’t have a better drill target unless mineralization was sticking out of the ground,” said Kolebaba.

Through an extensive exploration program, Adamera has generated 15 high-grade gold targets that are ready for drilling. The company is in the process of creating a drill program to test the newly-identified targets.

The Goodfoot property is located two kilometers south of the Lamefoot mine and is on strike with the Anfo fault which is thought to control gold mineralization in the region. Adamera has mapped a five-kilometer-long stratigraphy that is known to host high-grade gold mineralization on the property. Magnetics, IP and EM surveys and soil anomalies have generated several drill targets. One of the targets is estimated to be 25 meters deep and extends for 300 meters. Adamera intends to complete approximately 15 drill holes on the property to follow up on high-priority targets.

“The Goodfoot targets are compelling. They are within and along the same geological setting as the historic Lamefoot mine and have similar characteristics. The Goodfoot property combined with the Lamefoot South property to the north form a multi-kilometer exploration opportunity along strike of a past producer.  We look forward to the initiation of drilling this season,” said Kolebaba.

The Flag Hill mine resides within the Republic gold mine district and is located approximately one kilometer from the Eureka trend which has produced over 2.8 million ounces of gold grading 20 g/t gold and 15.8 million ounces of silver grading 110 g/t silver. The property is also located 10 kilometers from Kinross’ Kettle River mill.

The Historic Talisman Copper-Silver Mine

The historic Talisman copper-silver mine is located in northeastern Washington State. The property is approximately 95 kilometers by highway from Teck Resources’ (TSX:TECK.A) Trail smelter in Canada. 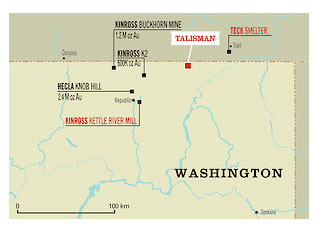 Actual production records for the Talisman mine are not available; however, reports exist from the early 1900s that suggest 521 tons of ore was shipped from the mine grading five percent copper, 102.9 g/t silver and 4.1 percent zinc. Twenty grab samples were recovered from a 700-meter by 800-meter area southwest of the mine. The samples graded up to 144 g/t silver, 3.45 percent copper, 6.91 percent zinc and 1.24 percent lead.

Adamera’s initial exploration program yielded results as high as 144 g/t silver, 3.45 percent copper, 6.3 percent lead and 6.91 percent zinc. The company has also completed a magnetic survey on the property which identified a large magnetic anomaly to the west of the mine that may be associated with this mineralization.

Moving forward, Adamera will be conducting additional mapping and prospecting at Talisman to trace and better define the mineralized zones at the magnetic anomaly to the west.

Mark Kolebaba has been instrumental in major discoveries since the 1980s and has experience with diamond, gold, silver and base metals. His experience ranges from early to advanced exploration, feasibility studies and working in an operating mine. He has held positions with BHP Billiton, Cominco Ltd. and the Northgate Group of companies. He was part of the team that discovered the first 120 kimberlites at the Ekati diamond mine and was responsible for the initial discovery of the Hope Bay gold deposit in Nunavut.

Kolebaba served as President and CEO of Diamonds North Resources and Uranium North Resources where he and the exploration team acquired one of Canada’s largest land positions. This work resulted in the discovery of the Amaruk project, a diamondiferous kimberlite field and the advancement of a historic 6.7-million-pound U308 deposit to an NI 43-101-compliant 20 million pound U308 Amer lake deposit. Kolebaba’s strengths lie in project generation, project acquisition and new business development. His aggressive management style will be a significant advantage to the future development of Adamera Minerals.

Mark Brown has been providing financial services to resource companies for over 25 years. He received a Bachelor of Commerce Degree from the University of British Columbia in 1990 and is a member of the Institute of Chartered Accountants of British Columbia. He has a strong understanding of financial requirements of public companies and his corporate activities include transactions, financing and corporate financial planning. Brown managed the financial departments of two TSX 300 mining corporations: Eldorado Gold and Miramar Mining. Between 1990 and 1994, he worked with PricewaterhouseCoopers. Brown, and his team at Pacific Opportunities, assist the company with its financial requirements.

Geir Liland brings over 25 years of corporate finance, accounting and management experience to Adamera Minerals. In 1982, he joined the TSXV and held the position of VP Corporate Finance from 1999 to 2002. During this period, he was involved in policy streamlining, and corporate finance review. He was also a member of the Exchange’s Executive Listings Committee. Currently, \Liland is a business consultant and a director of several public companies. His understanding of corporate governance in the junior market sector is an asset to Adamera Minerals.

Yale Simpson has a Bachelor of Applied Science (Geological Engineering) from the University of British Columbia and is a professional geologist. He has over 30 years of experience as a senior geologist, exploration manager and CEO of companies involved in precious metals projects in Australia, Africa, Eastern Europe and Argentina. Those companies included Pennzoil Company, Chevron Exploration, Australmin Holdings, Black Swan Gold Mines Ltd. and Argosy Minerals Inc. Importantly, he and his exploration teams are credited with the exploration and development of several gold mines. He is currently the Executive Chairman of Exeter Resources and a Director of Rugby Mining. His particular expertise is in strategic resource planning and corporate communications.

Bernard Kahlert is a professional geologist with over 40 years of expertise in gold and base metals in Western Canada, the US, Australia and China. He is currently the VP of Exploration for Commander Resources Ltd. and Maritime Resources.

The information contained here is for information purposes only and is not to be construed as an offer or solicitation for the sale or purchase of securities. Readers should conduct their own research for all information publicly available concerning the company. Prior to making any investment decision, it is recommended that readers consult directly with Adamera Minerals Corp. and seek advice from a qualified investment advisor.