For over 150 years, gold mining has been a significant industry in the Northwest Territories, Canada. Past-producing mines like the Con and Giant mines near Yellowknife produced approximately 12 million ounces of gold at an average grade of 14 grams per ton Au over a mine-life of close to 70 years. The Lupin gold mine produced approximately 3.5 million ounces of gold averaging 12 grams per ton from its iron formation hosted gold. Nighthawk Gold has reported a current gold resource in its banded iron formation of approximately 2.1MM ounces Au. As the territory generates more investor attention to its mineral-rich landscape, revitalized gold exploration in this region could reach these historic scales once again.

Rover Metals has 100 percent ownership interest in the Cabin Gold group of gold exploration projects. Since Cabin Gold’s acquisition in 2018, Rover has been quick to advance the project’s exploration and development, including obtaining exploration permits and completing extensive geophysics and drill programs, and most recently a winter access road (including ice road component) to decrease the company’s exploration operating costs by approximately 35 percent. 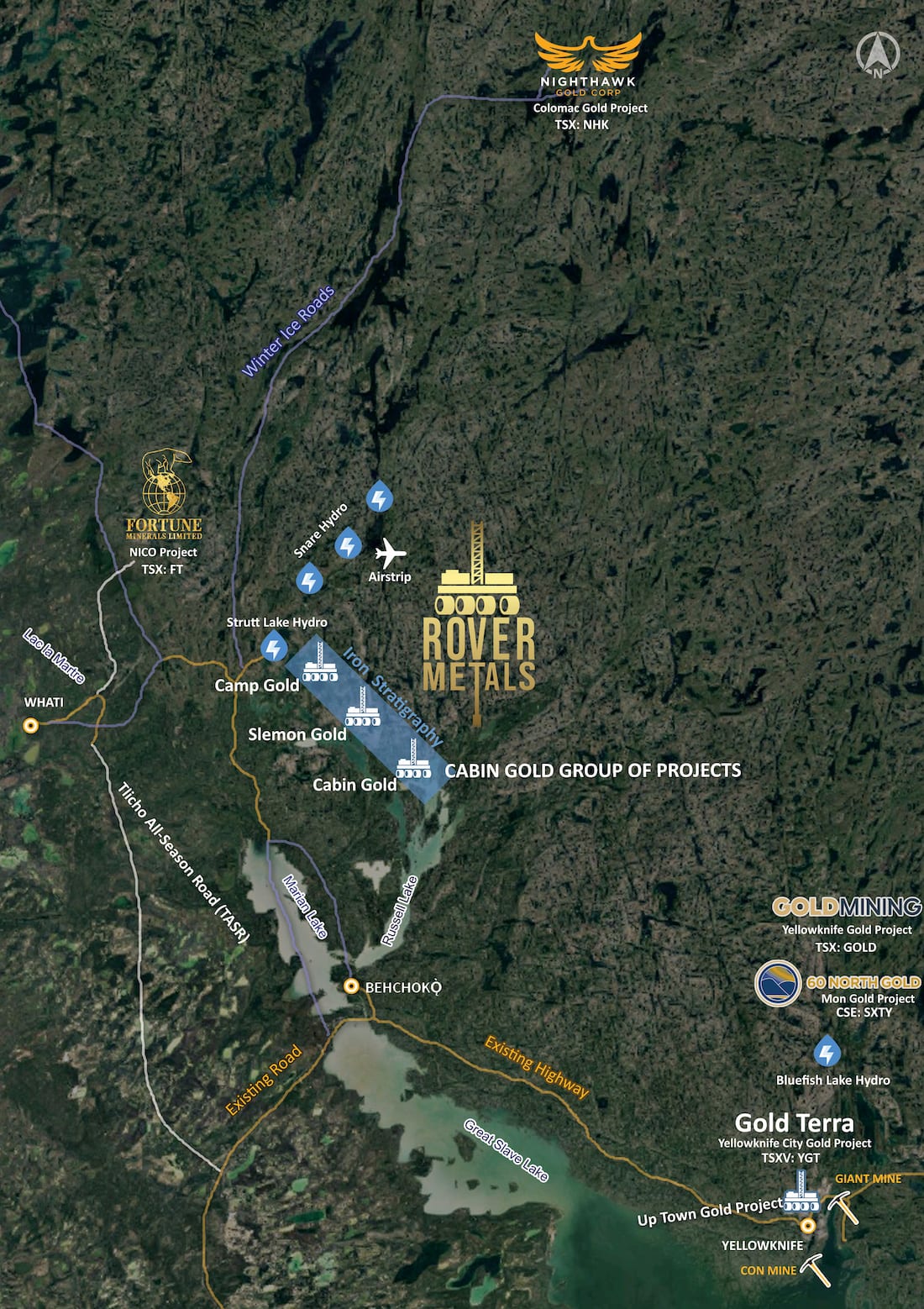 The Cabin Gold project consists of multiple near-surface and drill-ready brownfield gold targets. Exploration plans in early 2021 include a 3,000 meter drilling program expansion at Cabin Gold for approximately C$2 million. Rover’s expansion drilling will include expanding on the discovery of what it believes to be a primary gold bearing ore shoot at the Cabin Lake Gold Zone. As released on November 24, 2020, drill hole CL-20-08 intersected 32 meters of continuous gold averaging 13.6 grams per ton Au. The significance of hole CL-20-08 is that economic gold grades start at just 17.5 meters from surface, and the hole has identified a northwest trend and plunge at depth, of the gold mineralization in the ore shoot zone. Starting in March 2021, the Company plans to drill the Cabin Gold Zone ore shoot at depth, as well as several other brownfields targets that exist along the Bugow Iron Formation (for example, the Andrew North Zone, the Andrew South Zone, and the Beaver Zone – all part of the Cabin Gold Property). The Company currently has identified at least 12 targets as potential new ore shoot discoveries on the property.

The Up Town Gold property covers 11 gold showings over two corridors of structurally hosted high-grade gold mineralization and shear zoning, which also hosts the famous Giant Mine deposit. In December 2020, Rover Metals entered into a definitive agreement to option off 75 percent ownership interest in the gold project. Rover Metals will retain a 25 percent ownership in the Up Town Gold property. 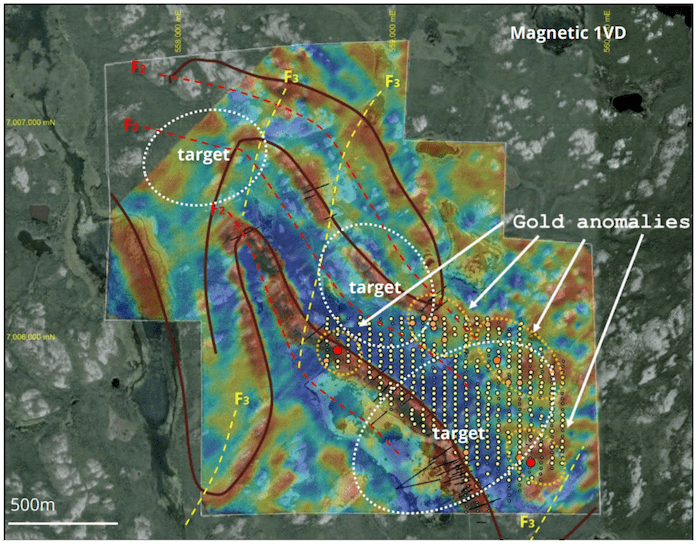 Up Town consists of six claims covering 3,227 hectares, strategically positioned along the west side of the Giant mine near downtown Yellowknife and TerraX Minerals’ Yellowknife City gold property.

Up Town covers 11 gold showings with structurally hosted high-grade gold mineralization similar to the Giant mine deposit. Grab samples from the main Fox South Shear zone have assayed up to 30.3 g/t gold with additional channel sample results showing up to 1.1 meters at 2.2 g/t gold.

Rover Metals has conducted extensive groundwork on the Up Town Gold property. A 2017 summer diamond drilling program confirmed previous known mineralized zones and expanded exploration of these mineralized zones along strike and to depth. Further advancement of the project presents exciting opportunities for significant gold discovery and target expansion.

Rover Metals retains a 25 percent ownership in the Up Town Gold property.

Judson Culter is an experienced start-up entrepreneur and co-founded Rover Metals in 2014. Culter has over ten years of international finance, capital markets, and accounting experience. He has helped raise over C$20 million in private and public financing for start-ups and growth-oriented companies in the Pacific Northwest, Asia Pacific and South America. He has also taken several mineral resource companies public, including the Dolly Varden silver project, whereby he was a co-founder and managed the exploration drill program.

Keith Minty obtained a B.Sc. in Mining Engineering from Queen’s University, Kingston, Ontario, Canada, in 1978. He has over 26 years of open pit and underground mine operational and project development experience in North America, Central America and Africa. From 2008 to 2013, Minty was the COO at Thani Dubai Mining, where he was responsible for all project exploration and operation activities in Yemen and Egypt. Prior, he was the South African country manager for Hunter Dickinson. Minty has also served on the board of directors of Asanko Gold and Oremex Silver and served as COO at Aurvista Gold. He currently serves on the boards of Auryn Resources and Callinex Mines.

Oliver Foeste is currently the managing partner of Invictus Accounting Group and brings over a decade of financial and business advisory and executive and directorship experience across several sectors, including mining, natural resources, technology, real estate, cannabis and more. Oliver currently holds strategic CFO roles for a select number of private and public companies and previously held senior management and executive positions in multinational and small-capitalization companies listed in both Canada and the United States. During the earlier years of Oliver’s career, he was at Deloitte, where he led audit and assurance engagements for private and public companies.

Louis Covello is an independent consulting geologist for the exploration industry. His professional experience spans more than four decades and includes serving as president and Director for Aurora Geosciences and Covello, Bryan and Associates. He has worked as a professional geologist throughout Canada, Australia, the United States, Southeast Asia and Russia. He is a member and past president of the NWT and Nunavut Chamber of Mines and a member of the NWT and Nunavut Association of Professional Engineers and Geoscientists, the Canadian Institute of Mining, Metallurgy and Petroleum and the Geological Association of Canada.

Eugene Hodgson is an accomplished senior executive in the private and public sectors. He is an experienced negotiator with First Nations groups and a strategic board member for several business and community associations. Hodgson has been the senior policy advisor for the Government of the Northwest Territories and served on the board of directors of various companies, including Grandfield Pacific, First Class Systems, Arimex Resources, Sea Breeze Power, Silvermex Resources and Metron Capital. He is currently a director and audit chair of Pebble Labs Inc., Maxtech Ventures Inc. and Red Fund Capital Corp. Hodgson is also the CFO for Fabled Copper & Gold and Trait Biosciences.

Salim Tharani has held top executive positions for Western and Russian conglomerates generating income of US$250 million to US$2.5 billion. He has also raised over US$1.3 billion through project financing, debt financing, private equity, venture capital and synthetic instruments and successfully integrated and executed over 88 M&A and LBO transactions with an aggregate value of over US$800 million. Tharani holds a Bachelor of Arts Degree from Simon Fraser University.