Based on two phases of geophysics by Searchlight, a high priority drill target has been delineated approximately 15 kilometres northwest of Flin Flon, along Highway 106. The Beatty South target is easily accessible, located approximately 150 metres south of the highway (Maps 1 & 2).

"Next step is drilling, with planning and permitting underway", stated Stephen Wallace, CEO of the Company.

In September 2019, Searchlight completed airborne Time Domain Electromagnetic (TDEM) and Magnetometer surveys of the Flin Flon North claims (Map 2). These surveys resulted in multiple potential geophysical targets over a 12.7-km strike length. Based on this 2019 survey and historic airborne EM data, Beatty South was selected as the primary target for priority follow up. In August 2020, an Unmanned Aerial Vehicle (UAV) Magnetic and EM program was completed to pinpoint the source of a coincident magnetic and electromagnetic anomaly detected in the target area.

During this program, Searchlight worked with Axiom Exploration Group Ltd. on the development of a UAV-EM system which combined a high-powered EM transmitter on the ground with a receiver housed on the UAV. This system exploits the flight advantages of the UAV, allowing collection of EM data at line spacing that is uneconomical for ground surveys, while utilizing higher power input from the ground transmitter than could be achieved with conventional airborne systems.

‘The Beatty South target has the conductance and magnetic signatures typically associated with VMS mineralization in the Flin Flon - Snow Lake Greenstone Belt. This coupled with the ease of access makes this a high priority target. In addition, there are other targets identified along this same geophysical trend, so if there is success with the pilot hole, it does open up an entire prospective trend for further exploration", stated Peter Dueck, Director of Searchlight, former Chief Geophysicist for Hudbay Minerals Inc. in Flin Flon, Manitoba. 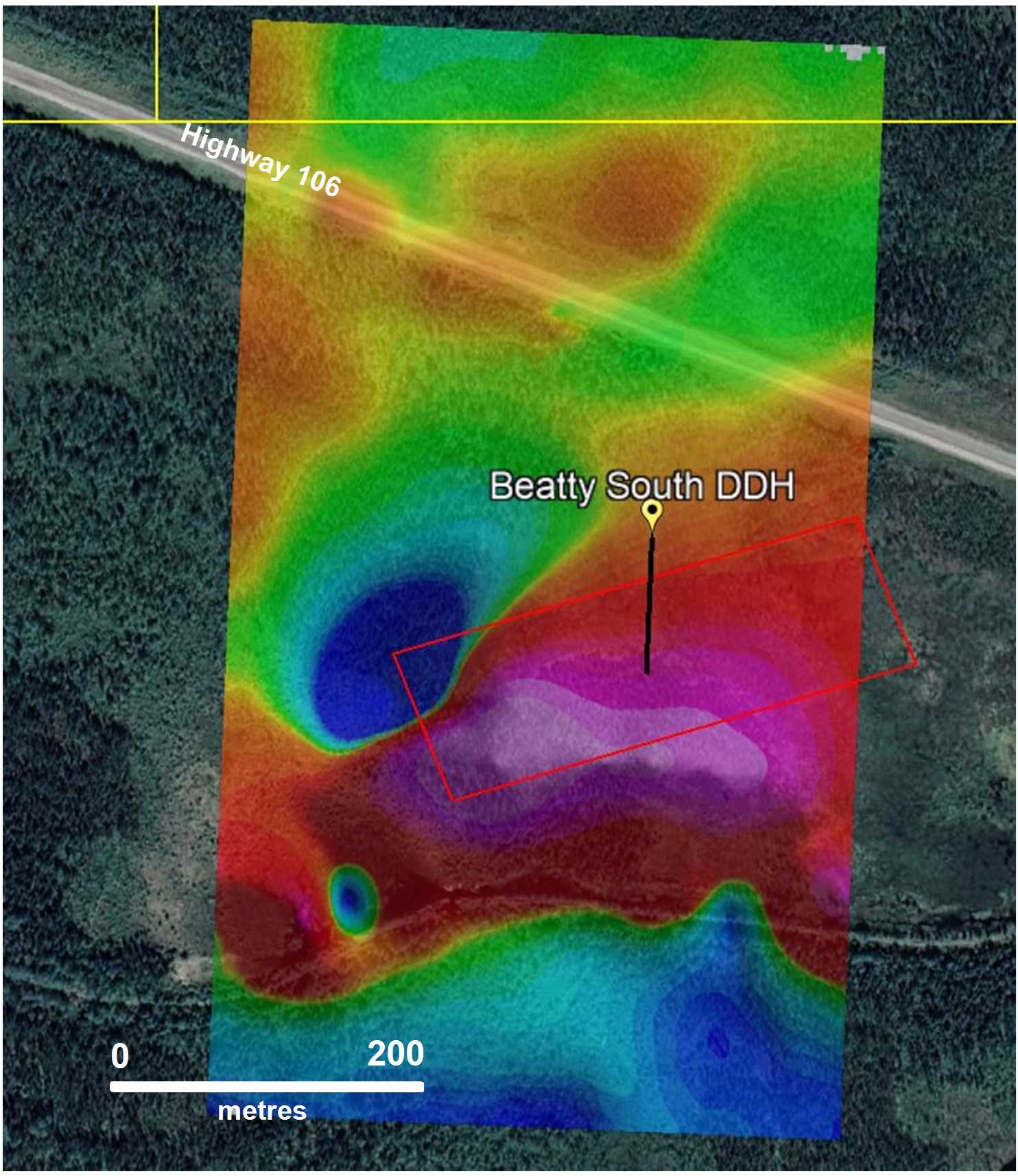 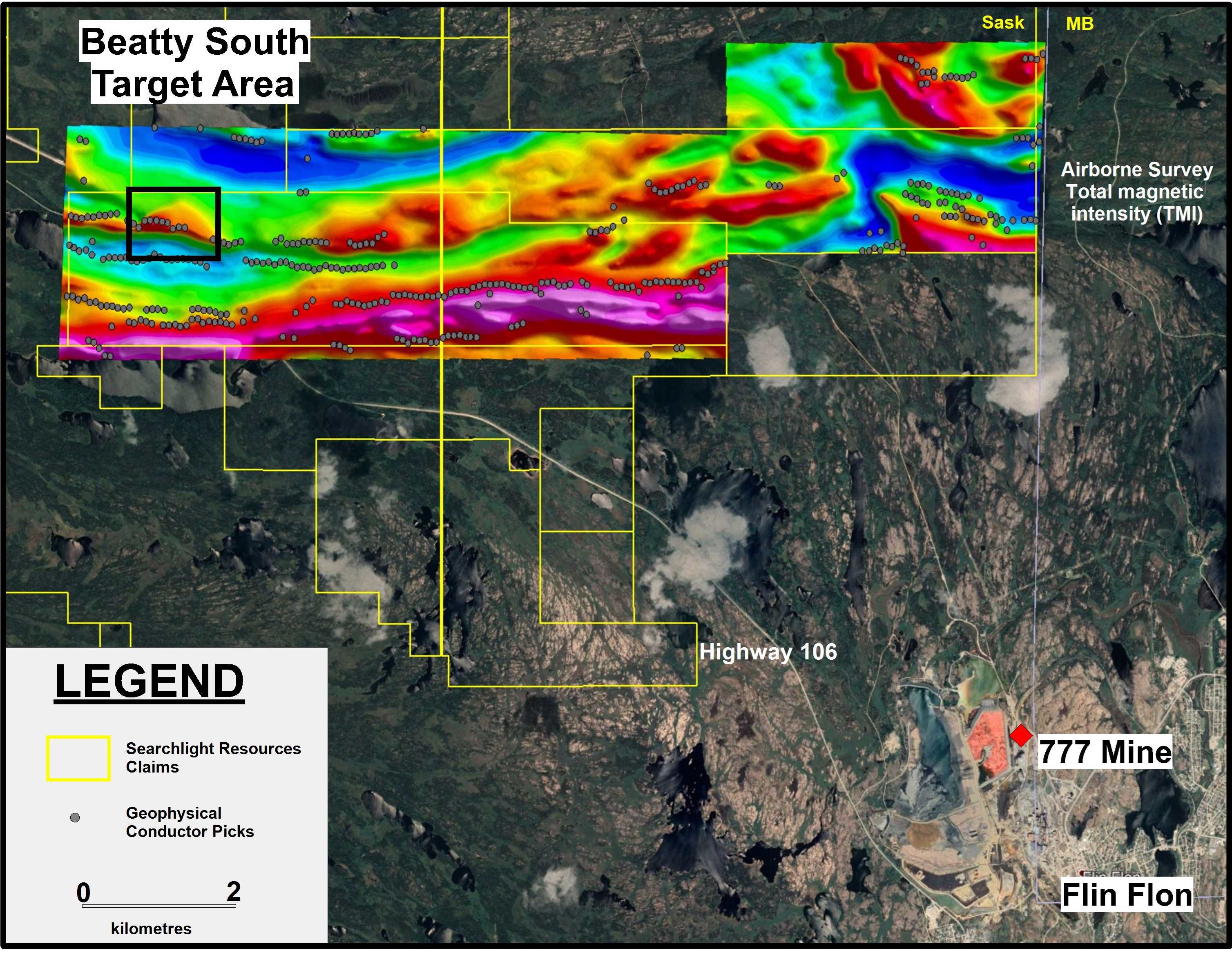 Peter Dueck, P.Geo., is Searchlight's Qualified Person for this press release within the meaning of National Instrument 43-101 and has reviewed and approved the technical information contained in this news release. Mr. Dueck is Director of Searchlight Resources and Chief Business Officer and Principal Geophysicist at Axiom Exploration Group. Mr. Dueck has been involved in the resource exploration industry in Saskatchewan since 2001, and until 2018, he held the position of Chief Geophysicist for Hudbay Minerals Inc. in Flin Flon, Manitoba.

Searchlight Resources Inc. (TSXV:SCLT)(OTCPINK:CYNCF) is a Canadian mineral exploration and development company focused on Saskatchewan, Canada, which has been ranked as the top location for mining investment in Canada by the Fraser Institute. Exploration focus is on gold and battery minerals throughout the Province, concentrating on projects with road access.