Drill Core Being Prepared for Assay

Thunderstruck Resources Ltd. (TSXV: AWE) (OTC: THURF) (The "Company") is pleased to announce that exploration is underway at our Liwa goldsilver prospect in Fiji. This will include mapping, sampling and a drill program.

CEO/President Bryce Bradley states "We have spent nearly three years to prepare the Liwa gold/silver asset for drilling and have delineated four initial targets spanning three kilometers of this extensive geological system. The entire team is delighted to begin testing this prospect which has produced some exceptional gold and silver grades at surface."

The program will consist of drilling, gridded geochemical sampling, and reconnaissance mapping and sampling to the north and south of known prospects. (See detailed map in this release.)

Drilling will focus on the main prospect areas: Jensen's, Liwa Ridge, Lower Vatuvatulevu and Gun. The purpose of the campaign is to investigate the geophysical anomalies discovered previously and to develop a subsurface understanding of the mineralized zones.

Core from the 2020 drilling campaign at Jensen's has been logged and is being cut for assay submission to ALS Australia. This includes 14m of intervals showing sulphide mineralization.

Jensen's prospect was the property's discovery outcrop and will be the first drill target in 2021. Breccias at surface have returned gold grades as high as 55.2 g/t gold. The Induced Polarization (IP) survey conducted in 2018/2019 showed strong signs of a geophysical anomaly coincident with the mineralized zones seen at surface. It detected these anomalies to a depth of at least 300m and will be investigated by this season's drilling campaign.

Similarly, the Liwa Ridge prospect also showed a strong association between surface mineralization and geophysical anomalies at depth. Mineralization in these zones has yielded grades of up to 375 g/t silver and 8.5 g/t gold.

Lower Vatuvatulevu and Gun are equally exciting prospects with great potential. Rock samples from the former have returned assays of up to 41.6 g/t gold and 1,205 g/t silver, whilst breccias at Gun have shown intense sulphide mineralization associated with 0.45 g/t gold in rock samples and strong soil geochemical signatures.

The team at Liwa have completed 400 of the 1,400 geochemical samples planned for 2021. Soil samples are being taken on a hybrid 20 x 100 / 20 x 200 grid, as well as along selected, accessible ridgelines. The purpose of the soil sample campaign is to develop an understanding of geochemical signatures associated with mineralization, as well as to develop new prospects along-strike.

The program will also include reconnaissance mapping and sampling to the north and south of the known targets, with the goal of investigating potential extensions of these along-strike. 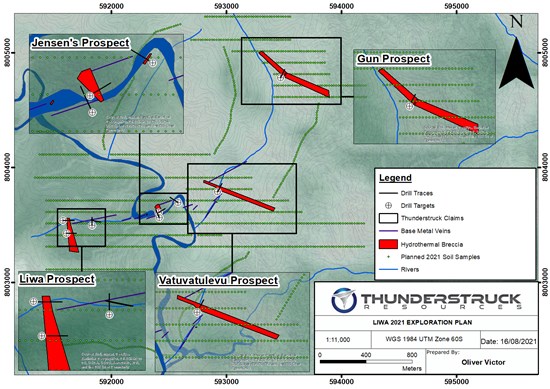 About Fiji
Viti Levu, the main island of Fiji, has a long mining history. It is on the prolific Pacific Ring of Fire, a trend that has produced numerous large deposits, including Porgera, Lihir and Grasberg. The island of Viti Levu hosts Namosi, held by a joint venture between Newcrest and Mitsubishi. Newcrest published Proven and Probable Reserves for Namosi of 1.3 billion tonnes at 0.37% Cu and 0.12 g/t Au (5.2M ounces Au and 4.9M tonnes Cu). Namosi is now undergoing environmental assessment as part of the permitting process. Lion One Metals is now developing its Tuvatu Project, with Indicated Resources of 1.00 million tonnes at 8.48 g/t Au (274,600 ounces Au), and Inferred Resources of 1.33 million tonnes at 9.0 g/t Au (384,000 ounces Au) reported at a 3.0 g/t Au lower cutoff. The Vatukoula Gold Mine has been operating for 80 years, producing in excess of 7 million ounces.

About Thunderstruck Resources
Thunderstruck Resources is a Canadian mineral exploration company that has assembled extensive and highly prospective properties in Fiji on which recent and previous exploration has confirmed zinc, copper and precious metals mineralization. The Company provides investors with exposure to a diverse portfolio of exploration stage projects with potential for zinc, copper, gold and silver in a politically safe and stable jurisdiction. Thunderstruck trades on the Toronto Venture Exchange (TSX-V) under the symbol "AWE" and United States OTC under the symbol "THURF."

To view the source version of this press release, please visit https://www.newsfilecorp.com/release/94860.