This Volcanic Gold Mines profile is part of a paid investor education campaign.*

Volcanic Gold Mines Inc. (TSXV:VG, FWB:CKC1) is a Canadian exploration company focusing on high-yield precious metals exploration and development in a mining-friendly region of Central America. Volcanic Gold’s primary projects are located in the highly favorable jurisdiction of Guatemala, with involved mining experience and regional expertise in the country since 1998. The company’s management consists of a highly experienced mining and capital markets team that intends to leverage its deep domain expertise to identify favorable acquisition targets.

Guatemala shares the same geological belt as Mexico and the same world-class potential for precious metals discoveries. With minimal investment into this highly favorable jurisdiction, high-grade discoveries, such as Escobal and Cerro Blanco, have led to increased excitement and funding through a new wave of mining investments.

In 2019, Pan American Silver invested US$1 billion into acquiring control of Tahoe and Bluestone and announced an additional US$92 million in financing. The diverse portfolio of company shareholders demonstrates international interest, with Silvercorp electing to maintain 19.9 percent of the company and insiders and owners holding approximately 40 percent of shares.

Volcanic Gold Mines is strategically positioned for success in Guatemala with the added interests of a new pro-mining government as of January 2020. With permitting processes taking only 60 to 90 days, operational efficiency is optimized and quite clear.

In the region, there is a favorable mix of established exploration companies and new explorers. This includes the Gold Group Management and their 25 years of experience with the same geological and management team and new mining campaigns in high-grade gold and silver discoveries that are ready for resource definition.

Volcanic Gold Mines has also acquired an option on a large land position in Eastern Guatemala from Radius Gold (TSXV:RDU). The company can earn a 60 percent interest by spending the cumulative amount of US$7 million on exploration programs on the Holly and Banderas projects within 48 months from the date of the agreement. However, an initial US$1M must be spent on exploration within the 12 months of receiving the required drill permits.

Following the exercise of the option, Volcanic Gold Mines will enter into a standard 60/40 joint venture and can continue exploration. During this time, the company has also been granted an exclusive right to evaluate and acquire Radius’s other property interests in Guatemala on reasonable terms which covers an additional 30,000 Hectares of highly prospective ground.

The company’s primary Holly and Bandera projects are operating on data from past discoveries by Radius geologists in 2003 and Goldcorp’s Escobal silver discovery in 2007. Both projects indicate the potential for extensive high-grade drill intercepts with multiple targets open for expansion or testing by drilling. With a proprietary geochemical database, positioning of targets allows streamlined operations of the large project land package.

Both Volcanic Gold Mines’ Holly and Banderas projects are located in an established gold-silver region that was first discovered between 2002 and 2003 by Radius Geologists. Initial discovery was the the Cerro Blanco gold deposit. which is presently being developed by Bluestone Resources Inc. Further gold/silver discoveries occurring in 2007, Escobal, indicate the world class potential of this region. 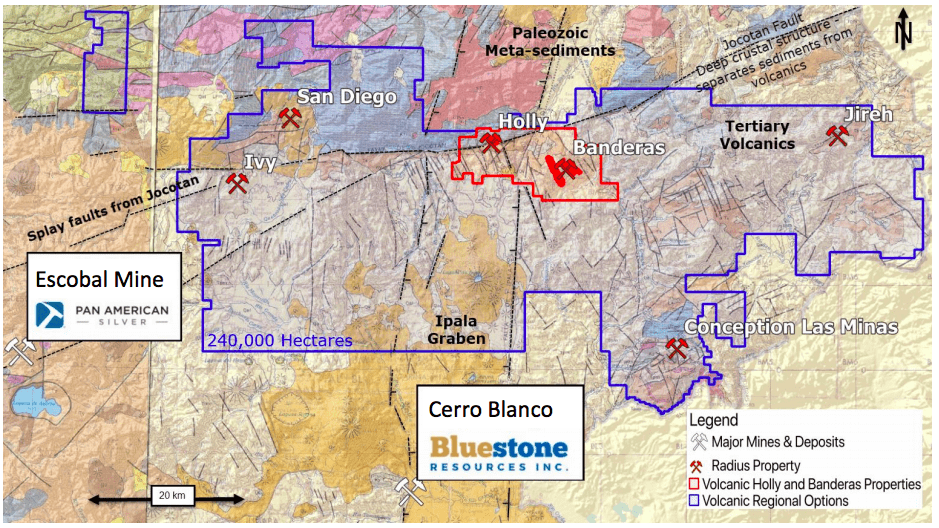 The Holly Project is located at the intersection of the Jocotan fault and Ipala graben fault in eastern Guatemala. The project has shown high-grade mineralization with a possible fast track to establishing high-grade gold resources. At present, best drilling has been at six meters of near-surface intercept grading 43.56 g/t gold and 1,618 g/t silver being returned. With just 15 shallow historic drill holes completed to date, The company intends to complete a significant drill program at Holly in the coming months with the intention of defining a high grade gold/silver resource.

Drawing from initial discoveries by Radius Geologists in 2002 and 2003 and the world-class silver discovery in Escobal by Goldcorp in 2007, Holly demonstrates the potential for multiple targets open for expansion or testing by drilling. This expansion effort is optimized by the accessibility of the project site in relation to Bluestone’s planned processing plant, a short 60-kilometer drive by paved road. 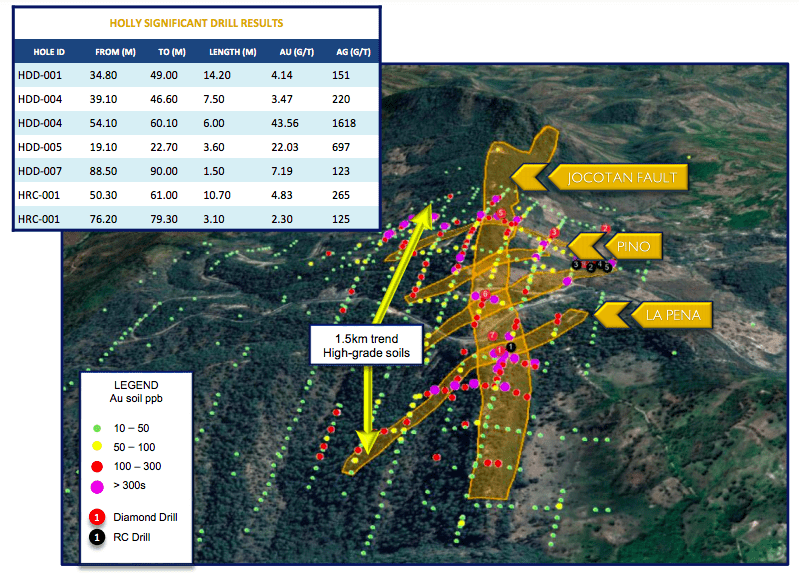 The Banderas project has demonstrated high-grade mineralization in multiple drill intercepts over approximately a four-kilometer strike length. Additional undrilled gold-silver geochemical targets exist along this trend. It is a large caldera and rhyolite dome complex that contains gold and silver-rich epithermal veins and vein breccias extending over nine square kilometers. These Banderas veins are predicted to merge at depth, indicating a deep source. The brecciated dome margin targets at Zapote indicate another exciting target area to be drill tested. 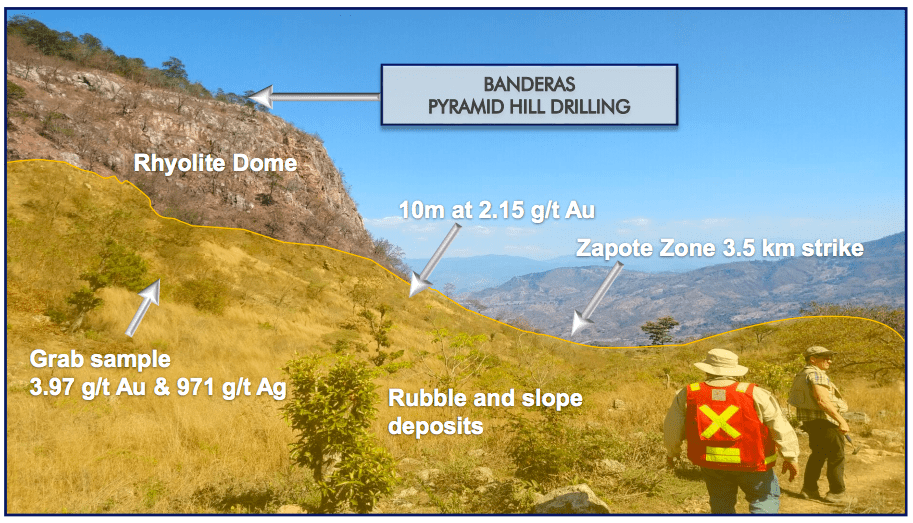 Like the Holly project, Banderas demonstrates high-grade mineralization in multiple drill intercepts, including 70 g/t gold and 516 g/t silver at 1.5 meters and 4g/t gold and 70 g/t silver at 6.7 meters. The last drill campaign at Banderas was in 2011, in total 49 holes have been drilled to date with multiple high grade intercepts. However, with less than 200 vertical meters tested so far, these highly prospective targets warrant a significant exploration program.

Simon Ridgway, founder and director of Volcanic, will take over management of the Company as CEO and President. Simon has extensive knowledge of Guatemala, both geological and socio-political, having been one of the first modern gold explorers to work in the country. Simon has led his geological teams to the discovery of several gold deposits in Central America and is keen to repeat those successes.

Mike Povey is a mining engineer with over 40 years of worldwide experience in the resource sector in a wide range of commodities. He has held senior management positions in various public companies including Rio Tinto and Anglo American, with surface and underground mining operations in Africa, North America, and Australia. Over the past 20 years, Povey has held positions as Chairman, Managing Director and Technical Director of several ASX and AIM-listed companies. He has led project acquisitions, exploration programs, JV negotiations and equity raisings. Povey is a Chartered Engineer and a Member of the Australasian Institute of Mining and Metallurgy and holds a number of Certificates of Competency, including a West Australian Mine Managers Certificate.

Charles Straw is an economic geologist with over 20 years of global experience in the mining and natural resource industries. He has held executive management positions in public and private mineral explorers and led the successful exploration and evaluation of precious and base metal projects in Australia, South America, North America, and China. He has an international network of technical and financing relationships providing both project flow and project finance. Straw is a member of the Canadian Institute of Mining, Metallurgy and Petroleum (CIM) and the Australasian Institute of Mining and Metallurgy (AusIMM).

Simon Ridgway is a co-founder of Fortuna Silver Mines Inc., a prospector, a mining financier and a Casey Research Explorer’s League inductee. Ridgway and the exploration teams under his guidance have discovered gold deposits in Honduras, Guatemala and Nicaragua and a silver/gold deposit in Mexico. His companies have raised over CAD$450 million for exploration and development projects since 2003. Ridgway is the Chairman of Fortuna Silver and CEO of Radius Gold Inc., Rackla Gold Metals Inc.

Kevin Bales has over 20 years of financial reporting experience in the mining and information technology industries. He currently serves as CFO for several public junior exploration companies with operations in Canada, the U.S., Latin America and Europe. Bales holds a Bachelor of Management degree with a major in accounting from the University of Lethbridge.

The information contained here is for information purposes only and is not to be construed as an offer or solicitation for the sale or purchase of securities. Readers should conduct their own research for all information publicly available concerning the company. Prior to making any investment decision, it is recommended that readers consult directly with Volcanic Gold Mines and seek advice from a qualified investment advisor.

Newmont Corporation today announced it will report full year and fourth quarter 2021 operations and financial results before the market opens on Thursday, February 24, 2022, and will hold a conference call at 10 a.m. Eastern Time the same day. The earnings call will also be carried on the Company’s website. Webcast Details Title: Newmont Full Year and Fourth Quarter 2021 Earnings Conference Call URL: The full year ...

Newmont Corporation (NYSE: NEM, TSX: NGT) today announced it will report full year and fourth quarter 2021 operations and financial results before the market opens on Thursday, February 24, 2022, and will hold a conference call at 10 a.m. Eastern Time (8:00 a.m. Mountain Time) the same day. The earnings call will also be carried on the Company's website.

The full year and fourth quarter 2021 results will be available before the market opens on Thursday, February 24, 2022, on the "Investor Relations" section of the Company's website, www.newmont.com . Additionally, the conference call will be archived for a limited time on the Company's website.

Newmont is the world's leading gold company and a producer of copper, silver, zinc and lead. The Company's world-class portfolio of assets, prospects and talent is anchored in favorable mining jurisdictions in North America, South America, Australia and Africa. Newmont is the only gold producer listed in the S&P 500 Index and is widely recognized for its principled environmental, social and governance practices. The Company is an industry leader in value creation, supported by robust safety standards, superior execution and technical expertise. Newmont was founded in 1921 and has been publicly traded since 1925.

YAMANA GOLD INC. will release its fourth quarter and full year 2021 operational and financial results after the market closes on Thursday, February 17, 2022, Eastern Time . The Company will then host a conference call and webcast to review the results on Friday, February 18, 2022, at 9:00 am ET . Fourth Quarter and Full Year 2021 Conference Call Details Conference Call Replay The conference call replay will be ...

YAMANA GOLD INC. (TSX:YRI; NYSE:AUY; LSE:AUY) ("Yamana" or "the Company") herein announces fourth quarter and full year 2021 preliminary operating results. Production during the fourth quarter totaled 281,388 gold equivalent ounces ("GEO") (1) significantly exceeding the previously provided quarterly guidance of 270,000 GEO (1) with full year production of 1.01 million GEO (1) exceeding annual guidance of 1.00 million GEO (1) . Fourth quarter all-in sustaining costs ("AISC") (2) are expected to be approximately $970 per GEO (1) lower than previously provided cost guidance for the quarter and approximately 8% below AISC (2) reported for the prior three quarters. Strong cash flows increased cash balances by more than $65 million to a total year-end cash balance in excess of $305 million. In addition to the strong operating results and cash flow generation during the quarter, important and material strategic initiatives were advanced, including the previously announced permitting for the Phase 2 expansion at Jacobina, the announcement of the Company's greenhouse gas abatement ("GHG") target aligned with a 1.5º C temperature scenario and the continuing advancement of development and exploration activities across the portfolio.

Gold79 Mines Ltd. is pleased to announce the purchase of the Sheep Trail Group of patented claims and reports the initial sampling results from these claims. The patented ground, covering 113.2 acres, is immediately east of the Banner patented claims . It encompasses an extensively altered and mineralized zone which has been traced for over 1.2 kilometres within the Sheep Trail block, forming a portion of the ...

Gold79 Mines Ltd. (TSXV: AUU) (OTCQB: AUSVF) ("Gold79" or the "Company") is pleased to announce the purchase of the Sheep Trail Group of patented claims and reports the initial sampling results from these claims. The patented ground, covering 113.2 acres, is immediately east of the Banner patented claims (Figure 1). It encompasses an extensively altered and mineralized zone which has been traced for over 1.2 kilometres within the Sheep Trail block, forming a portion of the approximately 10km North Oatman trend the Company is exploring at Gold Chain. Widespread, shallow mine workings (pre-1920) can be seen throughout the claim block. Preliminary grab samples of mine dumps have yielded up to 51.9 gt Au and rock chip samples have returned up to 2.0 metres at 20.4 gt Au.