This TriStar Gold profile is part of a paid investor education campaign.*

It’s no secret that the mining sector is capital intensive. Finding gold alone is a lengthy process that involves discovery, development, and production. Without reliable financing, proven leadership, access to stable mining regions and industry expertise, navigating through these critical stages can be challenging.

TriStar Gold (TSXV:TSG,OTCQX:TSGZF) is a fully funded gold exploration and development company focused on expanding its resources in Brazil, which is one of the world’s largest gold producers, in the state of Pará, one of the country’s major mining jurisdictions. The company recently completed a US$8 million agreement with Royal Gold (NASDAQ:RGLD) regarding its acquisition of a 1.5 percent net smelter royalty (NSR) on TriStar’s Castelo de Sonhos property.

The company’s wholly owned Castelo de Sonhos property covers 17,177 hectares and a large-scale paleoplacer gold deposit. Resource development is expected to be direct and unchallenging due to widespread, shallow-dipping surface mineralization, a predicted rate of 98 percent gold recovery and the absence of sulphides, greatly simplifying extraction processes and maximizing sustainability for years to come.

TriStar Gold’s Castelo de Sonhos project has a combined total 2-million-ounce National Instrument 43-101 resource estimate of 17.7 million tonnes of gold in the indicated category at 1.2 grams per tonne (g/t), totaling 0.7 million ounces of gold. In the Inferred category, the estimate highlights 39.8 million tons at 1 g/t, meaning 1.3 million ounces of gold. However, 20,000m of infill drilling has been completed in areas of inferred resource, so an update is anticipated. The project is located in a mining-friendly jurisdiction and benefits from excellent access and infrastructure.

A preliminary economic assessment (PEA) conducted in November 2018 indicates a pre-tax internal rate of return (IRR) of 51 percent at a gold price of US$1,250, a pre-tax net present value (NPV) of US$319 million and a post-tax NPV of US$264 million. At $1,750 gold and 5:1 exchange rate pre-tax IRR is 100% and NPV is US$730 million. The company has initiated a prefeasibility study (PFS) with results aimed for the second quarter of 2021. The  20,000 meters of infill drilling is mostly completed and published, we are waiting for the modeling and the engineering now.

In October 2020, the company began a major exploration drill campaign at its Castelo de Sonhos property to test new targets and expand known resources. Multiple discoveries have been identified in collaboration with  artificial-intelligence-powered algorithms provided through GoldSpot’s (TSXV:SPOT) leading technologies.

The company’s president and CEO, Nick Appleyard, commented, “We’re pleased with the results we’re getting from the infill drill program, not only for the occasional high-grade findings, but for the entirety of the infill drilling program, which is producing results consistent with our PEA resource model. With these additional 20,000 meters of infill drilling now complete, we anticipate that we’ll be able to convert much of the inferred resource in Esperança South into indicated resources, which can serve as a solid base for reserve estimations in the PFS.”

The company’s Castelo de Sonhos project benefits from significant exploration upside potential, with multiple regions identified as potential hosts of gold-bearing conglomerates at or near the surface. While drilling has confirmed the presence of gold in many areas of the property, including Esperança South, Central and East, large areas remain unexplored. To date, TriStar has drilled only a fraction of the property’s near-surface, shallow-dipping mineralization potential. 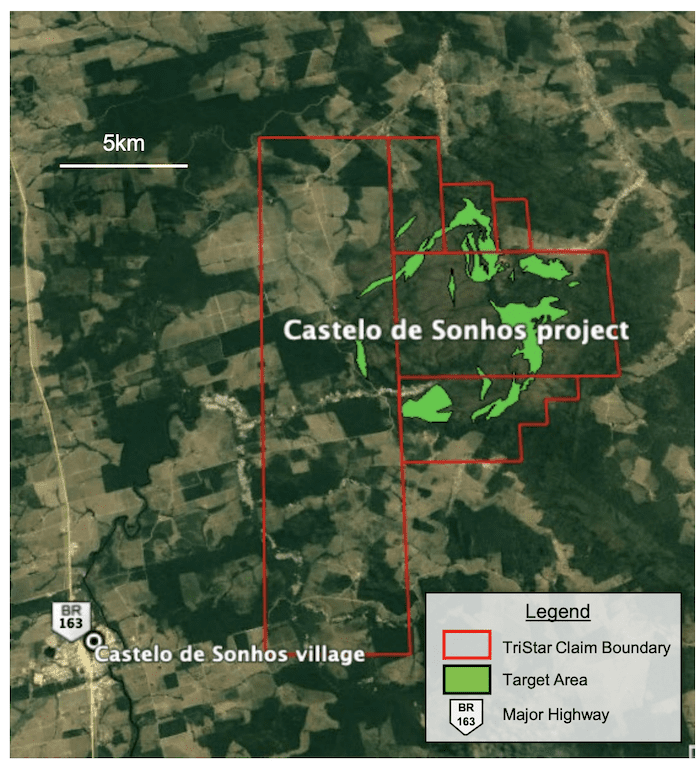 The company’s Castelo de Sonhos gold project is located in the Pará state of Brazil, roughly 20 km away from the town of Castelo de Sonhos. The 17,177 ha land package hosts a large-scale paleoplacer gold deposit with widespread surface mineralization that is amenable to open-pit mining. The project benefits significantly from exceptional infrastructure and access. 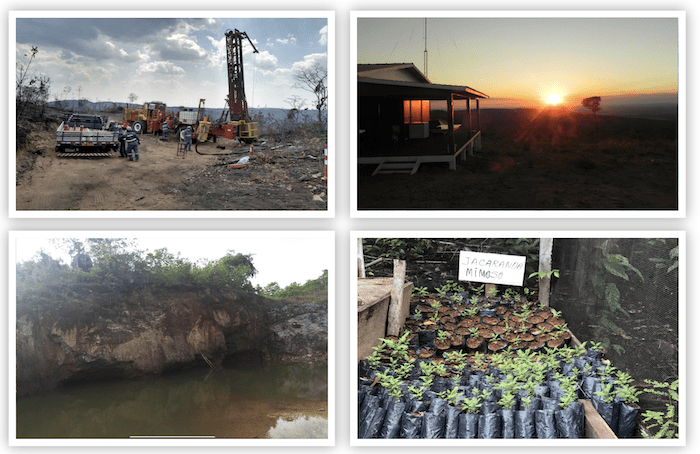 The metallurgical tests completed by McClelland Laboratories in Sparks, Nevada, showed exceptionally high gold recovery rates. Findings included an abrasion index of 0.33 to 0.37, a bond work index of 13.50 to 13.74 and an overall recovery rate of 98 percent.  All these results indicate a low-cost, high recovery commercial recovery process is easily attainable.

The company continues with aggressive exploration drilling throughout its Castelo de Sonhos property to explore the potential of gold-bearing conglomerates at or near the surface. PFS results are on track to be completed by the second quarter of 2021 and are expected to lower risk, improve confidence and increase valuation.

Nick Appleyard—President and CEO, Director
Nick Appleyard was appointed President and CEO in December 2015. He has executive experience in mining, having previously been the CEO of Chaparral Gold and Vice President Corporate Development for International Minerals. Nick has over 25 years of international experience in precious metals exploration and mining. He has managed exploration, development and production JVs in North and South America, including extensive project development experience in South America with more than 10 years in-country, and prior to that in Australia.

Nick is fluent in Spanish, holds a Bachelor of Science (Geology) from Curtin University, Australia, and is a member of the Australasian Institute of Mining and Metallurgy.

Scott Brunsdon was appointed Chief Financial Officer in December 2015. He brings extensive experience as a senior-level finance executive in the mining industry including as CFO for Chaparral Gold, International Minerals and Placer Dome NA. He has been a Director and senior manager with several mining companies and has over 28 years’ experience in public company management, corporate development, public listings, mergers and acquisitions.

Scott holds a Master’s degree in Business Administration from the University of British Columbia.

Mo Srivastava is one of the world’s pre-eminent authorities on resource estimation and geostatistics. He is a geologist and geostatistician with more than 30 years of experience in economic geology. He has been an Advisor to Boards of Directors, the President and Founder of consultancy firm FSS Canada, and coordinator of Benchmark Six, an industry-wide initiative to improve information on the reliability of assay data. He has served as an expert witness and is respected as an advisor to governments and to standards-development organisations. Mo is co-author of the most widely used textbook on geostatistics (approx 40,000 copies sold), and of more than 40 papers on the theory and practice of geostatistics. With advancements in technology, Mo continues to develop leading techniques for resource estimation.

Mo has a Bachelor’s degree in Earth Sciences from MIT and a Master’s degree in Geostatistics from Stanford University. He was the inaugural recipient in 2016 of the Award of Merit from the Association of Professional Geoscientists of Ontario.

Fabio Mozzer—Vice President
Fabio is an engineering geologist with a Bachelor’s degree from the Federal University of Ouro Preto. He has over 25 years of experience in both mining and exploration, mainly in gold and diamonds throughout Brazil but also in environmental management. Fabio has been with TriStar since inception, before which he worked for Brazauro and Rio Tinto.

Andrew Grant—Vice President
Andrew has a Master’s degree in Corporate Social Responsibility from the University of Barcelona, is a graduate of the McRae Institute of International Management’s Latin American Management Program, and has an undergraduate degree in Spanish and Economics from the University of Victoria. He is a corporate social responsibility and strategic operations specialist. Having worked in over 40 countries, he implements stakeholder engagement strategies, building partnerships between companies, civil society and governments to maximize the positive impact of social and environmental investment.

Tony Brown—Manager of Metallurgical Engineering
Tony Brown has over 40 years of international experience in mining and metals including metallurgical testing, flowsheet design, feasibility studies, detailed engineering, cost estimating, commissioning and operations. Projects have included mineral dressing and hydrometallurgy of precious metals, base metals and non-metallic minerals. He was a Founding Partner and ultimately President of MRDI, an internationally recognized consulting group based in San Mateo, California. Previous employers include Zambia Consolidated Copper Mines, Bechtel and Fluor Engineers. Tony holds the degrees of Bachelor and Master of Metallurgy from the University of Sheffield, England.

The information contained here is for information purposes only and is not to be construed as an offer or solicitation for the sale or purchase of securities. Readers should conduct their own research for all information publicly available concerning the company. Prior to making any investment decision, it is recommended that readers consult directly with TriStar Gold and seek advice from a qualified investment advisor.