Bringing the Mon Gold Project Back into Production

Sixty North Gold Mining Ltd. (CSE:SXTY,OTC Pink:SXNTF,FWB:2F4) is a junior gold development company focused on bringing the past-producing Mon gold project back into production. The Mon project is located 45 kilometers north of Yellowknife, Northwest Territories and 20 kilometers north of the Bluefish hydro-electric plant. The Mon project’s proximity to Yellowknife provides the company with quick and easy access to personnel, food and materials.

Between 1990 and 1997, the mine was in operation and is estimated to have produced 15,000 ounces of gold grading 30 g/t gold. The mine was closed in 1997 due to low gold prices. The mining permits for the property were reissued in 2014, ensuring that the property can quickly be put into production again now that gold prices are on the rise. Sixty North Gold believes that it can do this with little capital investment.

While the gold markets were down, Sixty North Gold conducted additional exploration on the property to find other mineralization. This led to the discovery of a new, high-grade gold-silver massive sulfide horizon, known as the Nelson Lake deposit. To date, the company has identified six zones of significant base metal concentrations and has identified seven drill targets along the Nelson Lake deposit for further exploration. Sixty North Gold also plans to undertake a bulk sampling program from the past-producing A zone once the mill and dry stack tailings facility is installed on the property.

Sixty North Gold is earning an 80 percent interest in the Mon gold project from New Discovery Mines Ltd. (NDM). In October 2019, Sixty North Gold negotiated an amendment to earn in the remaining 20% carried interest from NDM by issuance of 25 per cent of outstanding shares of Sixty North Gold.  Both companies are led by an experienced management team who collectively own 27.7 percent of Sixty North Gold’s shares. Two such members of the team are Dr. Dave Webb and John Campbell.

Dr. Webb optioned the property from Cominco Limited in 1988. He has been attributed with finding the largest granite-hosted gold deposit in the Northwest Territories and was responsible for mining the Mon gold deposit in the 1990s. John Campbell is a finance expert who is responsible for identifying the value in the Mon project. He owns 17.8 percent of the company shares.

Sixty North Gold has the option to earn an 80 percent interest in the 1,536.92-acre, past-producing Mon gold project. The project is comprised of 11 contiguous mining leases and three mineral claims, located 45 kilometers north of Yellowknife, Northwest Territory. The property is a 15-minute flight to Yellowknife, providing the company with access to personnel, food and materials. A winter road provides access to the property for fuel and heavy materials and the Bluefish hydro-electric dam is 20 kilometers south of the property. 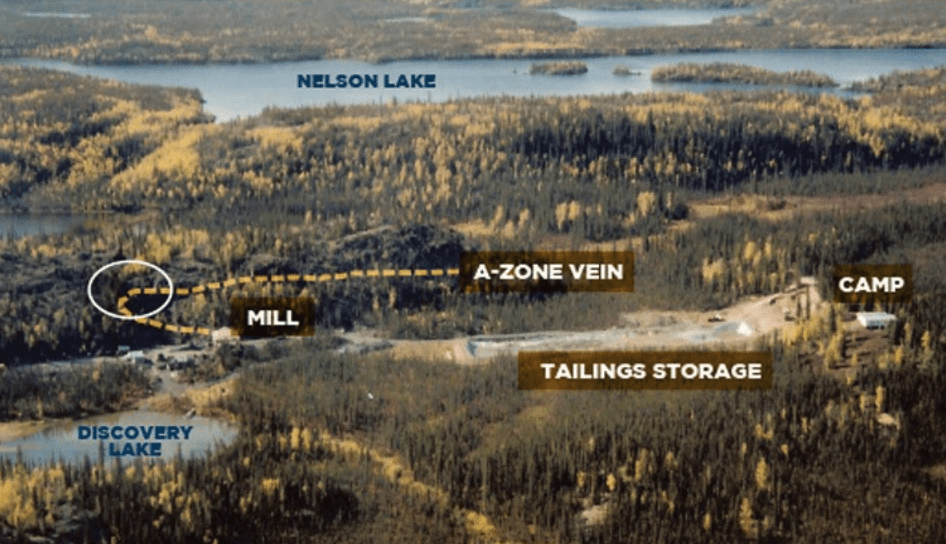 The property is located five minutes away from the Clan Lake Main zone, part of GoldMining Inc.’s (TSX:GOLD,OTC:GLDLF) Yellowknife gold project. The Main zone hosts a measured and indicated mineral resource of 14.108 million tonnes grading 2.33 g/t gold (1.05 million ounces) and an inferred mineral resource of 9.302 million tonnes grading 2.47 g/t gold (739,000 ounces) . The property is within the claims of TerraX Minerals Inc.’s (TSXV:TXR,OTC Pink:TRXXF,FWB:TX0) Yellowknife City project. The project is also 50 kilometers south of the Discovery mine, which produced one million tons of ore and one million ounces of gold between 1949 and 1969. Sixty North Gold believes that the A zone shares similar geological features with the Discovery mine.

In 1937, Cominco Limited prospectors discovered a high-grade quartz vein during a reconnaissance flight north of Yellowknife. In 1988, the property was optioned by Cominco to David R. Webb with the option to earn 100 percent interest.

Between 1991 and 1997, the mine was in operation during the summer months. During this time, the mine reportedly produced an estimated 15,000 ounces of gold were recovered from 15,000 tonnes of ore from the West and East stopes.

The Mon gold mine closed in 1997 due to low gold prices. The property remained dormant until October 2016.

In 2016, Sixty North Gold and NDM conducted a 378.9-meter drill campaign that confirmed there was mineralization below the mined-out stopes of the A zone. Each drill hole in the program intersected the zone at depth. Continuous chip samples collected from the surface of the A zone include three meters grading 147 g/t gold.

The following year, a surface prospecting program was completed on the property in areas outside of the A zone. Mechanized trenching returned 0.90 meters grading 1.2 g/t gold and 0.50 meters grading 688 g/t gold. In 2018, Sixty North Gold completed metallurgical testing on the property. The tests featured a simple mill circuit and achieved a recovery rate of 98.8 percent. 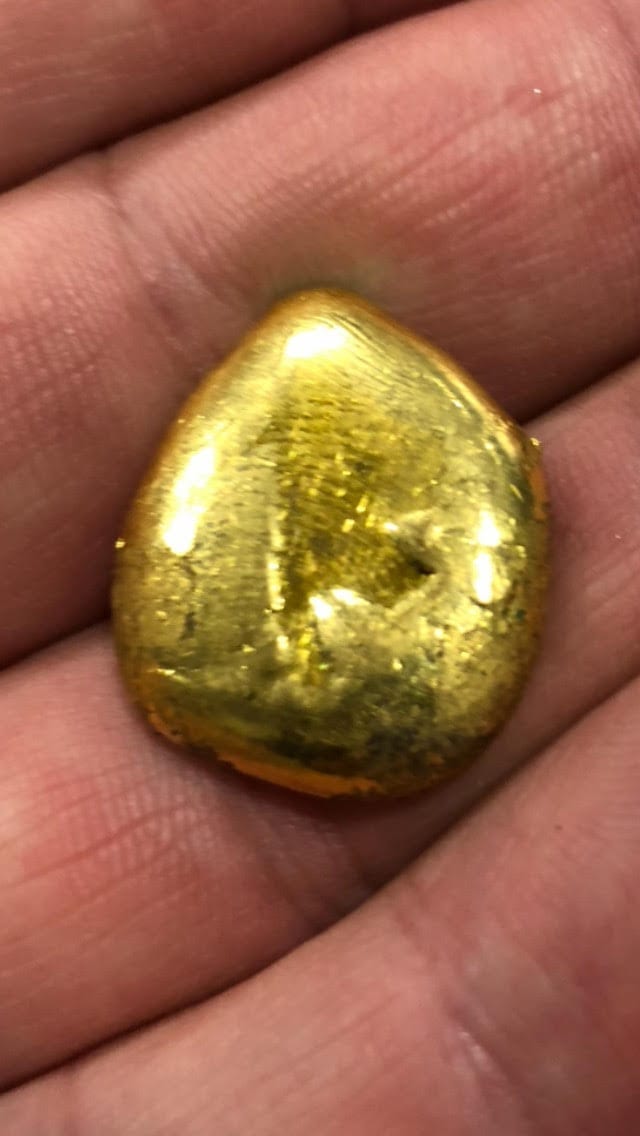 The results from the program were included in a technical report that had recommendations for future work programs. The report suggested a surface and prospecting program to confirm and qualify the established showing and to generate new targets. The report also recommended that a 1,000-tonne bulk sample should be collected from several points along the A zone to determine the grade, width and continuity of the vein.

To date, Sixty North Gold has not developed a mineral resource or reserve estimation on the property. 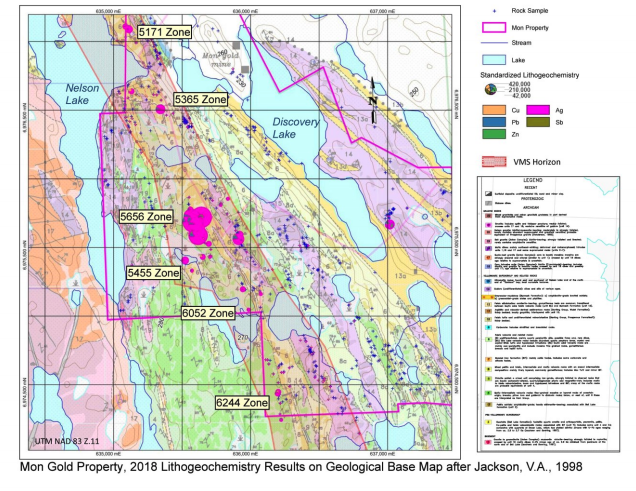 *Grab samples are selective by nature and may not represent average grades.

In 2019, an airborne geophysical survey was flown over the property. The study delineated seven drill targets that the company expects to follow up on later this year.

Moving forward, Sixty North Gold intends to continue its exploration efforts on the volcanic massive sulfide (VMS) and shear gold zones on the property. The company plans to also conduct an underground sampling, bulk sampling and testing program on the A zone.

As Sixty North Gold moves the project towards production, the company intends to install a mill and dry stack tailings facility. Once in place, the company plans to process the bulk sample at an initial rate of 100 tonnes per day. Sixty North Gold is examining regional exploration property acquisition opportunities. 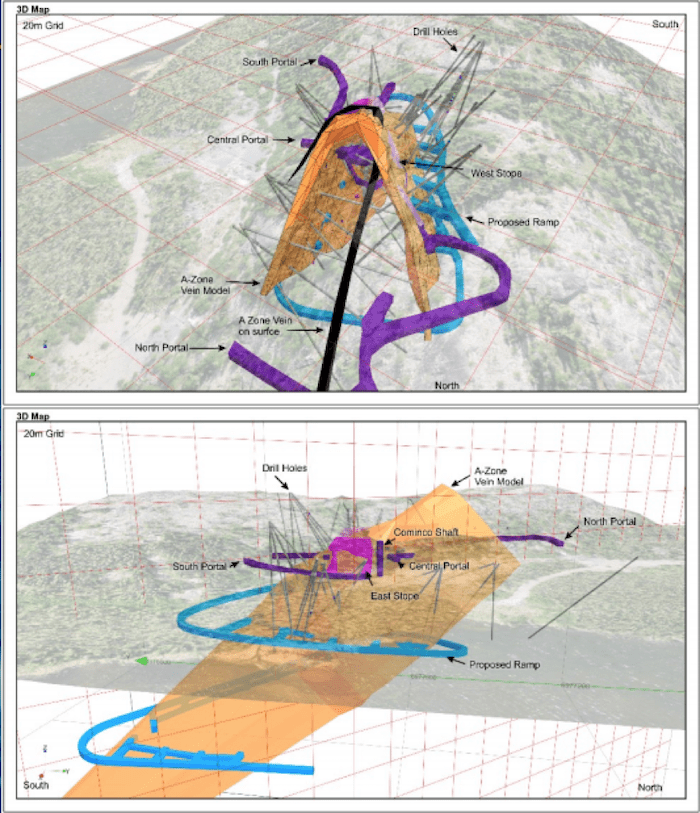 Dr. Dave Webb is a recognized expert in Yellowknife geology and gold deposits. He is credited with discovering both the largest granitic-hosted gold deposit in the Northwest Territories and the largest gold deposit in the Yellowknife greenstone belt in the past 40 years. He served as president and director of Tyhee Gold Corp. where he and his team developed a high-grade gold deposit into production, Mongolia’s first hard rock gold mine, and advanced the Yellowknife gold project through feasibility studies and into permitting. He and his team brought the Mon gold mine into production in the 1990s, shutting down when gold prices declined below $300 (US) per ounce. In 2014 he obtained permits to restart this mine. Over the past 40 years, he has worked worldwide consulting, has sat on the executive and boards of five other public junior companies, and is a member of the advisory and finance committees for British Columbia’s Centre for Training Excellence in Mining.

John Campbell is a Chartered Professional Accountant, CA and has been the Chairman, President, Secretary and a Director of the corporation since its founding in July 2016 and Chief Financial Officer since July 2017.

Ronald Handford is a non-practicing professional engineer and is President of Handford Management Inc., a private management services company. He was the CEO of Sixty North Gold from September 2016 to May 2019. He is also a director of Grande Portage Resources Ltd., Vice President Communications for GMV Minerals Inc. and was formerly the Executive Vice President Corporate Development for Yellowhead Mining Inc.

Handford holds a Master of Business Administration degree from the University of Western Ontario (1979) and a Bachelor of Applied Science in Civil Engineering from the University of British Columbia (1974). He has over 20 years of international experience as a mining and technology entrepreneur, executive and advisor. He also has 15 years of experience as an international mining project finance and corporate banker, including Barclays Bank and the International Finance Corporation, and six years as an engineer and project manager related to mining and resource projects.

Gavin Kirk has worked in the investment community since 1985, beginning with Lévesque Beaubien Geoffrion (now National Bank Financial), followed by Union Securities Ltd. and Raymond James Ltd. During his 25 years in the capital markets, he gained extensive experience in sales and trading, as well as early-stage company financing, marketing, strategic planning and corporate restructuring.

Andriyko Herchak has been a Director of the corporation since July 24, 2017 and acted as its Chief Financial Officer from February 2017 to March 2017. He is the President and CEO of FinCanna Capital Corp., a royalty investment company for the licensed medical cannabis industry. Previously, he was the Chief Financial Officer of NexGen Energy Ltd., a publicly-listed uranium exploration and development company and Chief Financial Officer of Hathor Exploration Ltd, a publicly-listed uranium exploration and development company that was acquired by Rio Tinto in 2012 for $650 million. Herchak is a Chartered Professional Accountant, CA. He also holds a Bachelor of Commerce degree from the University of British Columbia (1993).

Brian Malahoff has been a self-employed professional geologist since April 1992. He holds a Bachelor of Science degree in Geological Sciences from the University of British Columbia (1985). His areas of work have included Canada, the US, Mexico, Ecuador, Peru, Bolivia and Argentina. He has conducted some of the field programs at Sixty North Gold’s Mon Gold project and other work on the Yellowknife greenstone belt.

The information contained here is for information purposes only and is not to be construed as an offer or solicitation for the sale or purchase of securities. Readers should conduct their own research for all information publicly available concerning the company. Prior to making any investment decision, it is recommended that readers consult directly with Sixty North Gold Mining Ltd. and seek advice from a qualified investment advisor.