Sirios Resources Inc. (TSXV:SOI) is a junior exploration company with five gold assets in James Bay, Quebec, an area the company has been exploring for over 20 years.

Cheechoo is the most advanced project in the portfolio and is adjacent to Newmont Goldcorp’s (NYSE:NEM,TSX:NGT) Eleonore gold mine. Newmont Goldcorp is currently providing Sirios with access to infrastructure and expertise as Sirios develops Cheechoo. Highlights of the company’s 2018 drill program on the project include 2.4 meters grading 97.5 g/t gold, 8.2 meters grading 56.4 g/t gold and 6.8 meters grading 26.8 g/t gold. Moving forward, Sirios intends to develop a resource estimate and plans to upgrade road infrastructure to allow year-round access as well as easy transportation for heavy equipment as operations progress.

The Pontax property, meanwhile, is prospective for gold and silver, and Sirios has recovered up to 821 g/t silver as well as 1.31 g/t gold over 4.4 meters in channel sampling on the property. The Goldorak and Amikap properties remain unexplored, but are currently undergoing an initial fieldwork program.

Sirios’ success in the James Bay area is attributed to its management and board of directors. Director Michel Bouchard has been in the mining industry for over 30 years, is credited with co-discovering the Bouchard-Hebert mine and has a wealth of experience in financing, exploration, development and production. Additionally, Osisko (TSX:OR) and Newmont Goldcorp own six percent and 15 percent of company shares, respectively.

The 75-square-kilometer Cheechoo gold project consists of 145 claims in two non-contiguous blocks. The main block is adjacent to Newmont Goldcorp’s Eleonore mine, which is one of the largest gold mines in Quebec and has been in production since 2015. This block is accessible through Newmont Goldcorp’s property. The second block is approximately 20 kilometers west of the main claim block. 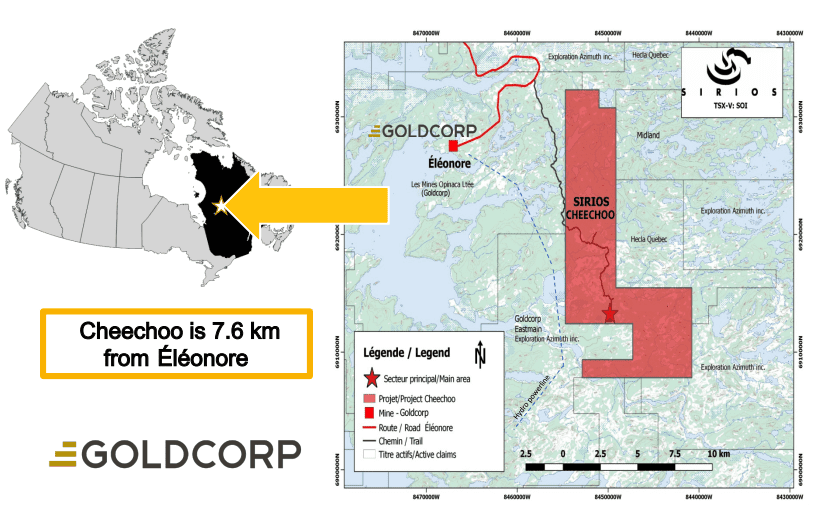 In 2010, Sirios discovered the property’s first gold showings upstream from a large, in-soil gold anomaly. Numerous samples were taken from the area and returned values up to 2.6 g/t gold.

As of December 2018, Sirios completed 50,743 meters of drilling across the property as well as prospecting, detailed geological mapping and channel sampling. Additionally, the company completed a downhole logging survey in 57 holes. Highlights from the drill programs include 2.4 meters grading 97.5 g/t gold, 8.2 meters grading 56.4 g/t gold and 6.8 meters grading 26.8 g/t gold. In addition, approximately 3,000 meters of channels were sampled and assayed in the main stripping area

Sirios’ metallurgical testing achieved gold recovery rates of up to 97 percent, including 88 percent by gravity. Of the three samples that were tested, two showed a slight increase in the head grades for the low-grade samples.

Moving forward, Sirios intends to complete a resource estimate for the property after completing additional metallurgical testing. The company also intends to improve access to the property by upgrading the roads to provide access to heavy machineries. Recently, Sirios increased its camp capacity from 20 to 50 workers and is upgrading its infrastructure. 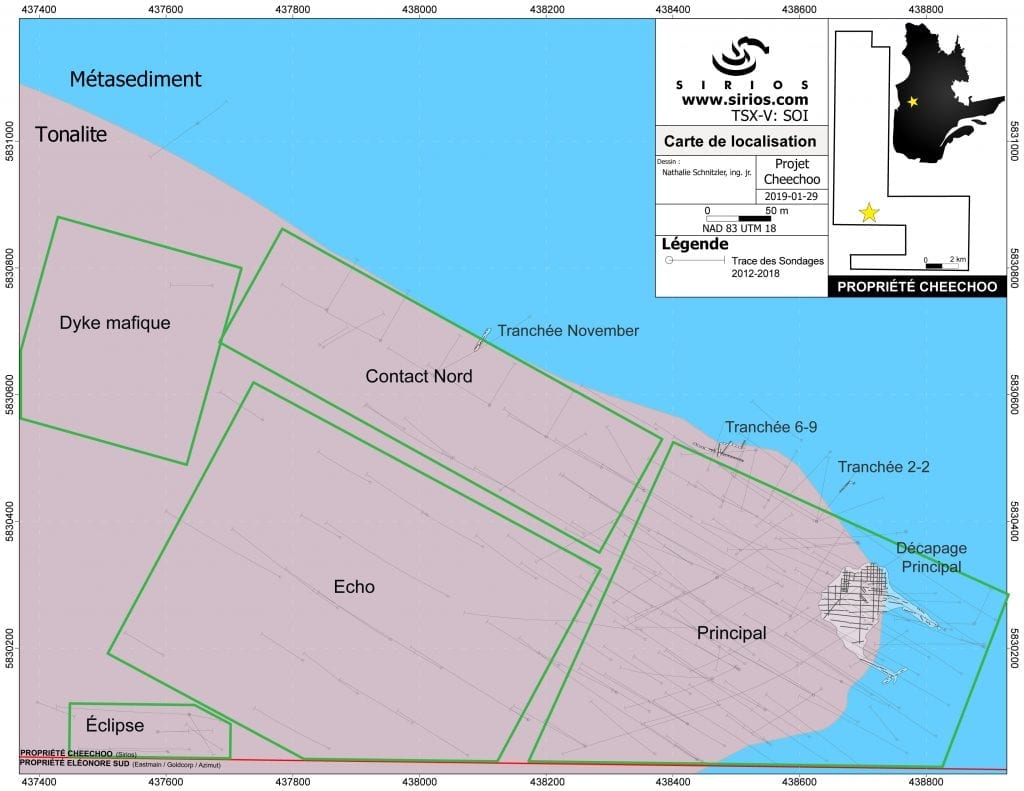 While developing its Cheechoo property, Sirios has also developed a pipeline of early-stage gold exploration projects in Quebec.

The 70-square-kilometer Aquilon gold property contains 140 claims. Sirios added 36 claims in the property in August 2019. The property is 10 kilometers south of the LA-1 hydroelectric complex in James Bay. Additionally, the property is accessible year-round by road and is near an outfitter with a landing strip.

The 45-square-kilometer Pontax silver-gold property is 350 kilometers north of Matagami and approximately 75 kilometers southwest of Goldcorp’s Eleonore gold mine. The property is accessible by a winter road that connects to the Matagami-Radisson paved road.

Latest work done in 2010 included a till sampling, litho-geochemical and prospecting program. The company identified a 10-square-kilometer gold potential area where a gold-bearing vein that returned values of 11.6 g/t gold and 42.7 g/t silver. Seven additional samples were taken over a length of 60 meters, returning grades averaging 9.5 g/t gold and 24.5 g/t silver.

Dominique Doucet has been active in the mineral exploration industry for close to 45 years. He holds a degree in geological engineering (1982) with a specialization in mineral exploration from the École Polytechnique de Montréal. He started as a consultant engineer. He founded William Resources Inc. (1990 to 1994) before creating Sirios in 1994. He was also a co-founder, Vice-President and Director of Dios Exploration Inc. (2001 to 2011), in addition to the creation of Khalkos Exploration Inc. in 2011. Both companies are spinoffs of Sirios.

Frédéric Sahyouni holds a Bachelor’s degree in Commerce from the John Molson School of Business of Concordia University in Montreal. He’s been an integral part of the Sirios team for over 10 years, managing the company’s finances, investor communications and marketing. He has been CFO of the company since 2011 and held a similar position at Sirios’ gold-copper spin-off Khalkos Exploration Inc. for four years. He was a director of Sirios from 2011 to 2014. He has worked as a business consultant for different companies in the mining and music industries.

Gilies Dupuis — Chairman of the Board and Director

Gilles Dupuis worked as an investigator at the Illegal Practice Surveillance Service of the Ordre des Ingénieurs du Québec from 2001 to 2017.

After completing his police technical studies, he was employed with the Montreal City Police Service as policeman and investigator from 1968 to 2000. He was also a Director of Khalkos Exploration Inc. from 2011 to 2013. He has been an active private investor mainly in natural resources companies since 1999.

Luc Cloutier holds an Accounting Diploma from Timmins Business College. Between 2001 and 2011, he was Chairman of Caisse Desjardins D’Amos, where he acted as director during the previous 10 years.

He was President and CEO of Trudel & Frères, a safety products and equipment distributor company. Since 1998, he has been President of his own private management company.

In 2002, he was appointed Special Representative of the Prime Minister on the issue of the territorial agreement with the Innu of the North Shore. He then became the President of the Association des centres locaux de développement du Québec (ACLDQ) and CEO of the Québec Forest Industry Council.

Michel Bouchard has been involved in the mining industry for over 30 years. He holds a Master degree in geology and an MBA. He has been a Director and Senior Executive for several publicly traded companies in the mining sector. He has vast experience in financing, exploration, development and production.

He was recently President and CEO of Clifton Star Resources Inc., which was acquired by First Mining Finance Corp., for which he is now a Director. He also occupied numerous senior executive positions in the past. Bouchard was responsible for the co-discovery of the Bouchard-Hébert mine in northwest Quebec.

The information contained here is for information purposes only and is not to be construed as an offer or solicitation for the sale or purchase of securities. Readers should conduct their own research for all information publicly available concerning the company. Prior to making any investment decision, it is recommended that readers consult directly with Sirios Resources Inc. and seek advice from a qualified investment advisor.