This Silver Spruce Resources profile is part of a paid investor education campaign.*

The Melchett Lake project is an advanced-stage precious and base metals project in the Thunder Bay mining district in northern Ontario. The project hosts a multi-kilometer-long strike length over known targets of high-grade precious and base metals mineralization. The property has numerous untested targets that offer Silver Spruce the potential to develop VMS and gold deposits as well as resource estimates.

The Pino de Plata property lies in the prolific Sierra Madre gold-silver belt and is 15 kilometers southwest of Coeur Mining’s (NYSE:CDE) Palmarejo mine, which produced 7.5 million ounces of silver and 122,722 ounces of gold in 2018. Additionally, the property is surrounded by land owned by Coeur.

Silver Spruce is preparing to complete its first drill program on the property. The company has completed its fieldwork exploration which included a detailed geological mapping and sampling across the property as well as an IP-resistivity survey over Santa Elena-Gossan. The field program expanded areas of mineralization to 50 hectares and added new vein targets at the La Perla, Santa Clara and El Muro vein systems. A total of eight targets were identified for drill testing.

Silver Spruce has expanded its property portfolio to include another gold asset in Mexico. The Cocula gold project is located in Mexico in an active mining region with several projects nearby including Endeavour Silver’s (TSX:EDR) Terronera project and Agnico Eagle’s (TSX:AEM) El Barqueno project. Recent work at the Cocula project has confirmed that high-grade gold mineralization is present on the property.

To advance the company’s exploration efforts on its properties, Silver Spruce has signed an MOU with China University of Mining and Technology (CUMT). CUMT is expected to perform joint geological research, field work and educational studies on each of Silver Spruce’s three properties.

As for the Melchett Lake project, it is an advanced-stage precious and base metals project in the Thunder Bay mining district in northern Ontario, Canada. Base metal mineralization has been found at the property in localized lenses of zinc and lead with variable grades of copper, silver and lead. Grades of up to 26.1 g/t gold, 560 g/t silver and 19.1 percent zinc have been recovered.

Silver Spruce has signed a definitive agreement to acquire a 100 percent interest in the 2,124-hectare, drill-ready Melchett Lake zinc-gold-silver VMS property, an advanced-stage precious and base metals project in the Thunder Bay mining district in northern Ontario, Canada. The property is located within an active exploration and mining region north of Geraldton. Since taking over the project, Silver Spruce has staked additional claims surrounding the property, doubling its size. The newly staked area covers a strike length of 20 kilometers of mineralized horizons, adding to the project’s discovery potential.

The area is home to Copper Lake Resources’ (TSXV:CPL) Marshall Lake VMS project, Premier Gold Mine’s (TSX:PG) Hardrock-Greenstone gold mine and the past-producing Anaconda-Dofasco iron mine. The project resides along one of the access routes proposed north of Nakina to the Ring of Fire nickel-copper-platinum group elements and chromium exploration projects.

The Melchett Lake belt contains several occurrences of polymetallic zinc-lead-copper-silver-gold VMS-style mineralization that is similar to ore deposits found at Mattabi, Winston Lake, Geco and Uchi Lake. Base metal mineralization has been found at the property in localized lenses of zinc and lead with variable grades of copper, silver and lead. Grades of up to 26.1 g/t gold, 560 g/t silver and 19.1 percent zinc have been recovered.

As part of the company’s due diligence on the property, Silver Spruce collected 72 rock and core samples and 60 were sent to the lab for multi-element geochemical analysis. The due diligence results were released in early November 2019. The results clearly showed the polymetallic nature of the Nakina and Reif zones. Highlights from the Reif zone include up to 14.7 percent zinc, 0.69 percent lead, 0.52 percent copper, 301 g/t silver and 0.737 g/t gold. The Nakina zone returned values of up to 14.85 percent zinc and 28.8 g/t gold.

The 397-hectare Pino de Plata property contains four exploration concessions with road access in the southwestern portion of Chihuahua State, Mexico. The property lies on the western side of the Sierra Madre gold-silver belt and is 5.5 kilometers south of Chinipas de Almada. The property is also 15 kilometers southwest of Coeur’s Palmarejo mine, which produced 7.2 million ounces of silver and 121,569 ounces of gold in 2017. Additionally, the property is surrounded by land owned by Coeur. 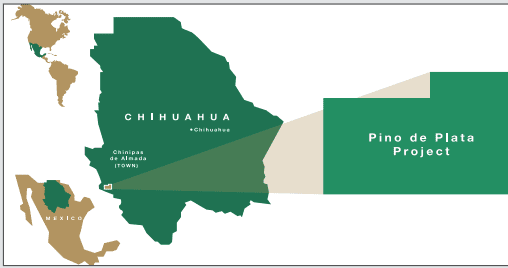 Since the 1600s, small-scale artisanal mining has occurred sporadically in nine areas on the property. Both Consejo de Recursos Minerales and Arcelia Gold conducted exploration on the property in 1985 and 2013 respectively. These exploration efforts focused on the existing workings, producing historical resource estimates in the process. In the past 30 years, the previous operator developed a surface mine and directly shipped high-grade ore to third-party mills and smelters.

Coeur acquired a large land package from Paramount Gold and Silver, including concessions surrounding Pino de Plata and have conducted exploration programs near the property and remain significant landholders in the area. In December 2014, Coeur acquired Paramount Gold for $146 million to gain control of the San Miguel property, which neighbors Coeur’s Palmarejo project.

In May 2015, Silver Spruce completed preliminary exploratory work on the property to complete a maiden NI 43-101 technical report. The program included mapping and sampling of mineralized outcrops and historic workings, such as Santa Elena, Santa Clara, La Perla, Sierpe I, Theodora, Terrero and Agua Hedionda II. 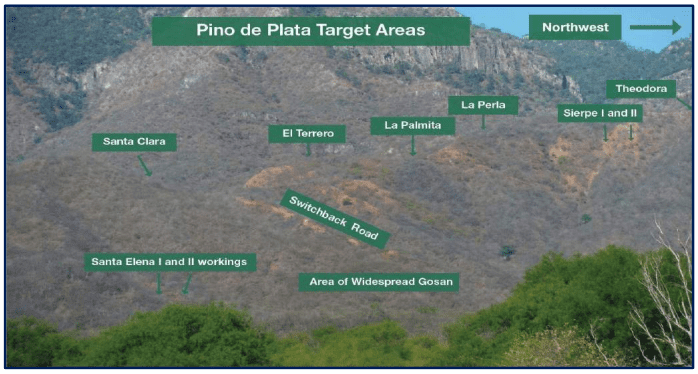 Each target area has a different form of mineralization. The 20,000-square-meter Terrero target features epithermal mineralization and requires limited additional mapping and sampling before drilling. Surface samples taken from the target include values between 31.25 g/t silver to 557 g/t silver.

Meanwhile, the Sierpe and Theodora veins are open along strike and contain mineable widths. Silver Spruce has identified favorable alteration and a newly exposed silver mineralization to the west. Surface samples recovered from the Theodora target returned up to 553 g/t silver and anomalous values of gold, lead, zinc and copper. A grab sample recovered at Sierpe graded 268 g/t silver, five percent lead and seven percent zinc. 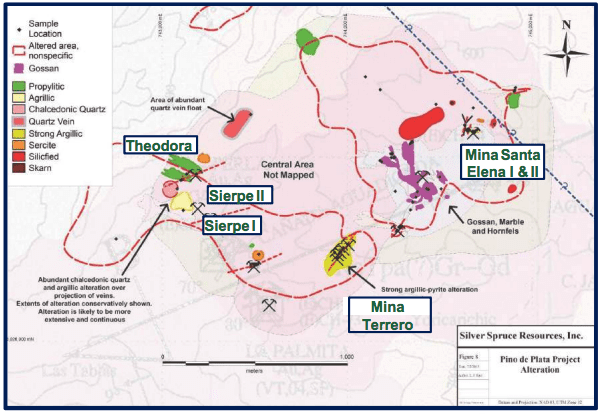 Silver Spruce has completed its field program which included a detailed geological and structural mapping of the property, rock and soil sampling and an IP-resistivity survey over Santa Elena-Gossan. To date, the company has received results back from the El Terrero and Gossan areas. Highlights from the sampling program include 1,130 g/t silver and 37,200 ppm lead at the El Terrero target and 255 g/t silver at the Gossan target.

Silver Spruce was also able to expand areas of mineralization to 50 hectares and added new vein targets at the La Perla, Santa Clara and El Muro vein systems. A total of eight targets were identified for drill testing. The company’s maiden drill program is expected to commence in the near term.

Silver Spruce has acquired the 233.5-hectare Cocula gold project in Jalisco state, Mexico. Cocula is an advanced-stage gold project that hosts part of a regional structural trend that is prospective for gold, silver and base metals. The property is located in an active mining region with several projects nearby including Endeavour Silver’s Terronera project and Agnico Eagle’s El Barqueno project.

Cocula is considered to be an epithermal deposit with veins and breccia zones that form mineralized shoots within the intrusive host rocks. The project was previously explored by Timmins Gold, now Alio Gold Inc. (TSX:ALO). 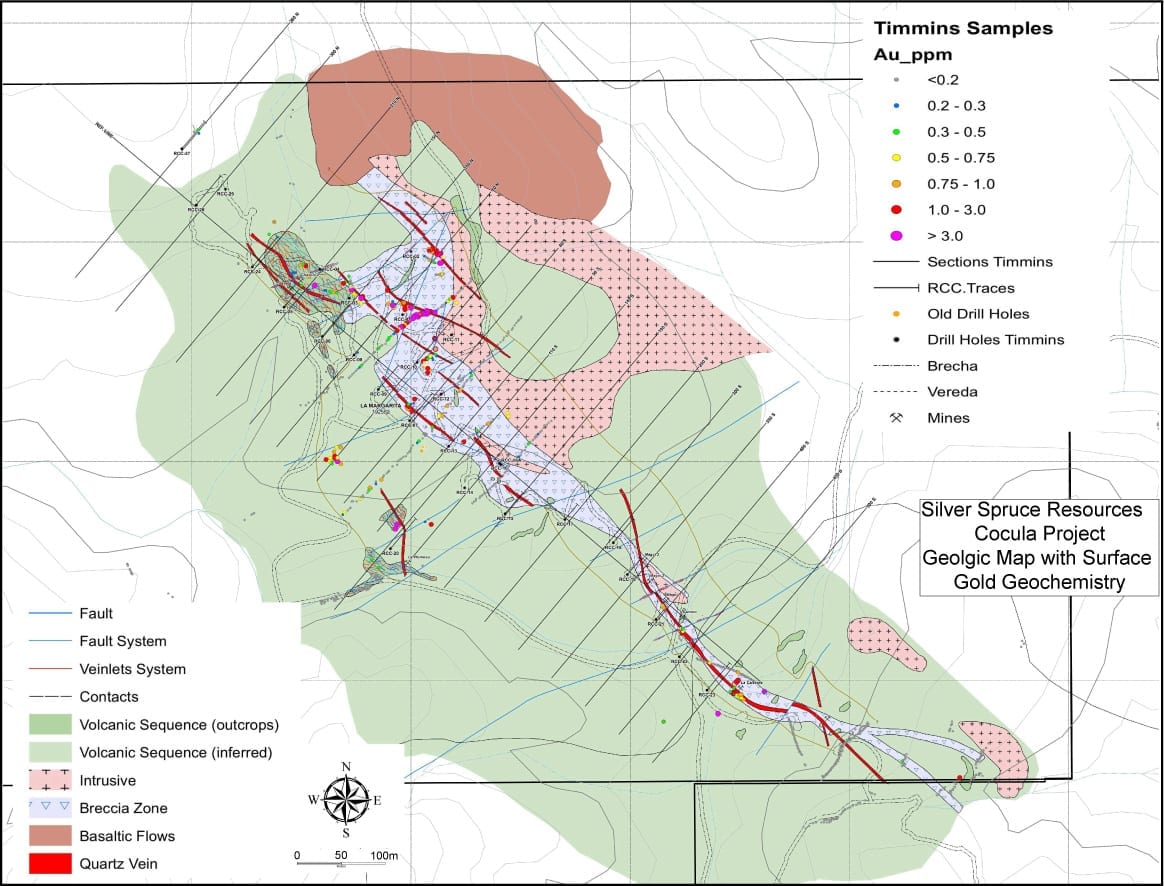 Since acquiring the property, Silver Spruce has confirmed the high-grade gold mineralization that Timmins identified in its 2008 drill program exists on the property. As part of the company’s due diligence on the property, Silver Spruce also collected rock chip samples. Nine out of the 26 samples returned gold assays of 0.88 g/t gold and up to 12.55 g/t gold, confirming the presence of widespread gold mineralization at the surface.

The results of the due diligence program were included in a NI 43-101 technical report, which was released in September 2019. The technical results were followed up by a drill permit for the Cocula project. The company can drill 47 holes on the property to test the 750-meter strike length of the known mineralized area.

Dr. Brian Penney has extensive experience in guiding early-stage companies, both as CEO and Chairman. Recent positions include founding CEO of TARA, a Halifax-based Telecoms R&D firm, Chairman and CEO of Abrideanin Halifax; Chairman of Intertainment Media Inc, a TSXV public company in Toronto; CEO and Chairman of e-djuster Inc. in Ottawa. He has been a board member for several academic-industry and government boards as well including the Communications Research Centre and CANARIE.

Earlier in his career, Dr. Penney held various research and academic positions in physics and computing science, working as a software engineer, system architect and development manager at Bell Northern Research and other companies in the telecommunications industry. He holds a Ph.D. in high energy nuclear physics from Imperial College of Science & Technology at the University of London and is a professional engineer.

Karl Boltz is a natural resources consultant with over 15 years working with public and private companies in Mexico. He is an expert in project acquisition, funding, market development and project management. He is the co-founding President, CEO and Director of EXMIN Resources Inc. (now Sierra Metals). Boltz is also fluent in Spanish.

Kevin O’Connor is a corporate attorney based in Chicago, Illinois. Currently, he is the General Counsel of Asia Pacific for Navstar Inc. He’s experienced in M&A, joint ventures and divestitures. He is also fluent in Mandarin Chinese.

Greg graduated with an MSc in Geological Sciences from Brock University and an Honours BSc in Geology from Dalhousie University, and is a professional geologist (P.Geo.) licensed with the Engineers & Geoscientists of British Columbia (EGBC).

Art Brown has over 30 years of business experience. He has served as on the board of directors for eight companies in total, ranging from technology to mineral exploration and oil and gas. He is currently President of Alba Minerals, a TSXV-listed precious metals exploration company.

Craig Gibson received his Ph.D. (1992), and M.S. (1987) in Economic Geology and Geochemistry from the Mackay School of Mines, University of Nevada, Reno and B.S. (1984) in Earth Sciences from the University of Arizona. He has been active in the exploration industry in Mexico since 1993, and founded Prospeccion y Desarrollo Minero del Norte, S.A. de C.V. (ProDeMin) based in Chihuahua, Mexico, in 2009, a consulting firm providing a broad spectrum of exploration related services to the mining industry, including regional and local geology, drilling supervision, project management and oversight, as well as land and legal studies and Mexico accounting. Dr. Gibson is also a Director of Garibaldi Resources Corp., a Vancouver based junior exploration company, and a Qualified Person for work performed on properties in Mexico, and previously co-founded and was Vice President of Exploration for EXMIN Resources Inc., a public company on the Vancouver Stock Exchange and later acquired by Dia Bras Exploration (now Sierra Metals). Dr. Gibson has a proven track record in exploration of ore deposits in Mexico where he has been involved in several major mineral deposit discoveries, including most recently the Ana Paula Gold deposit in Guerrero State. He was also responsible for assembling extensive land packages in several important districts with excellent exploration potential, resulting in several Joint Venture agreements with major international mining companies as well as Canadian junior explorers, and was instrumental in the reactivation of the Moris mine in Chihuahua State with Hochschild Mining. Dr. Gibson is a Certified Professional Geologist of the American Institute of Professional Geologists and has also published technical articles on a variety of mineral deposits in several journals.

The information contained here is for information purposes only and is not to be construed as an offer or solicitation for the sale or purchase of securities. Readers should conduct their own research for all information publicly available concerning the company. Prior to making any investment decision, it is recommended that readers consult directly with Silver Spruce Resources and seek advice from a qualified investment advisor.