This Searchlight Resources profile is part of a paid investor education campaign.*

Searchlight’s primary project, Bootleg Lake, is a high grade gold project near the mining center of Flin Flon. Four small scale mines have produced high grade gold from this 54 square kilometer property. The property covers two large scale exploration targets, a major shear zone prospective for gold and a belt of volcanic rocks prospective for VMS copper-zinc-gold deposits.   Bootleg Lake is just five kilometers from Flin Flon, Manitoba—home to Hudbay’s 777 underground copper-zinc-gold-silver mine, mill and smelter complex. The 777 mine lies within the prolific Flin Flon-Snow Lake Greenstone Belt. With the closure of the 777 mine slated for 2022, HudBay is exploring the region for more ore feed.

To complement its holdings in Saskatchewan, Searchlight Resources announced the staking of 347.2 square kilometers of claims in the Wapawekka Lake Greenstone Belt in September 2020, giving the company a nearly-contiguous block of claims in the western section of the belt. The western section of the claims acquired by Searchlight is accessible by road and approximately two-thirds of the property is accessible via boat from Wapawekka Lake, providing the company with year-round exploration potential. The Searchlight property has been surveyed by a modern VTEM geophysical survey funded by a federal-provincial initiative.

The English Bay Gold Prospect is a high-grade gold property which is new to the public markets. Discovered in the bear market years following the Bre-X crash, it is a unique because the prospectors did their own grid cutting, geophysical surveys, and drilling, and intersected high- grade gold drilling a blind target. All of it was done without a geologist qualified under disclosure policies mandated for public companies. Searchlight commissioned a qualified geologist to review this work and found that the prospectors work was done to a professional standard. Additionally, the cores from this work have been preserved and can be used for reference in guiding future work.

The prospectors drilled 35 drill holes totaling approximately 5,000 meters with over 20 gold intersections including: 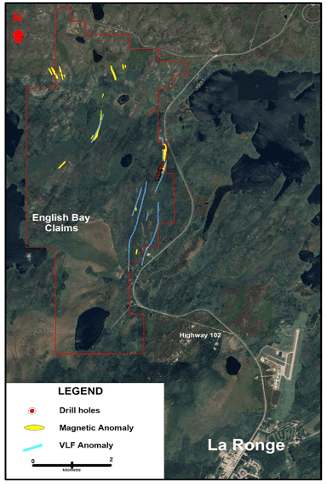 The Bootleg Lake gold project hosts high-grade gold and base-metal volcanogenic massive sulfide (VMS) targets near the town of Creighton, Saskatchewan, and is located five kilometers from Flin Flon, Manitoba. Searchlight Resources holds a 51-percent interest in the 54.3 sq. kilometer property which contains three past-producing gold mines with historic estimates, the Bootleg/Rio mine, the Henning Maloney mine and the Newcor gold mine.  The Rio Mine has a modern decline tunnel 1.5 kilometers in length complete with underground stope development which is potentially useful for underground exploration and/or production following a dewatering and rehabilitation program. There are also a number of additional gold and copper occurrences on the project. Excellent exploration infrastructure is in place, offering the potential for lower cost exploration at Bootleg Lake.

Management  believes a large-scale target lies in the Rio fault corridor with more than three kilometers of strike length from the Rio mine to the Henning-Maloney mine and continuing west. Recent drilling near the Henning-Maloney Mine has confirmed encouraging gold assays across multiple near surface structures.

Stephen Wallace has 30 years of mineral exploration and development experience from grassroots evaluation through to mine development and has fulfilled roles in the exploration industry from field geologist to corporate executive. Successful prior roles include the position of Senior VP, Exploration and Director of Trade Winds Ventures Inc. (TSXV: TWD) a gold exploration company, which was acquired by Detour Gold Inc. in 2012 for $84.0 million. At Trade Winds he was instrumental in advancing the Block A gold project prior to the takeover, with this project becoming Detour Gold’s planned West Detour open pit mine.

Mr. Ball is currently President, CEO and Director of NV Gold Corporation, is a graduate of the Haileybury School of Mines, Georgian Business College, UBC’s Canadian Securities Course, and is a member of CIMM.

Peter Dueck has been involved in the resource exploration industry since 2001, working with a variety of gold, copper, zinc and uranium companies. Until early 2018, he held the position of Chief Geophysicist for Hudbay Minerals Inc. in Flin Flon, Manitoba. In addition, Mr. Dueck was President of Pioneer Aerial Surveys Ltd., a wholly owned subsidiary of Global UAV Technologies Ltd., which provides a full spectrum of Unmanned Aerial Vehicle (UAV) based services and products. He was a founder of Aerial Imaging Resources Inc. (AIR), a UAV-based geophysical survey company acquired by Global UAV in 2018 and is currently the Principal Geophysicist and CBO for the Axiom Group.

Mr. Dueck holds a B.Sc. in Geophysics from the University of Saskatchewan as well as an MBA from the University of Wales. His MBA Dissertation is titled: “Tracking the Cyclical Valuation of the Canadian Junior Resource Sector” focusing on long term exploration trends and strategies in contrast with commodity prices.

John Kerr graduated from the University of British Columbia in 1964 with a Bachelor of Applied Science (B.A.Sc.) degree in Geological Engineering. He has participated in the mining industry continuously since graduation as an exploration geologist. Successful ventures include recognition and discovery of the Santa Fe gold mine, identification of the Calvada gold mine located on the northern boundary of the New Canyon property, and discovery of the Mindora gold/silver deposit, all located in Nevada. Kerr has served as a director of numerous public companies and is currently a Director of Quaterra Resources (NYSE Amex: QMM, TSX.V: QTA) and Bravada Gold Corp (TSX-V:BVA).

Mr. Stewart has worked for such firms as Bank of Montreal, Esso Minerals, Erickson Gold Mining, Canaccord Capital, Haywood Securities, Golden Capital, and Raymond James. He has been involved in financing mining companies for over twenty-five years, including discoveries in the base and precious metals sectors.

Brian Crawford, CPA, CA, has over 30 years of experience as a senior financial executive of private and public corporations. A former partner in a national firm of chartered professional accountants, Mr. Crawford is currently the CFO, Corporate Secretary and a Director of several Reporting Issuers.

*Disclaimer: The profile provides information that was sourced and approved by Searchlight Resources Inc. (TSXV:SCLT) in order to help investors learn more about the company. Searchlight Resources Inc. is a client of the Investing News Network (INN). The company’s campaign fees pay for INN to create and update this profile page, to which links are placed on Investingnews.com and channel newsletters.

The company description, investment highlights, and catalysts were sourced by INN and approved by the company. INN does not guarantee the accuracy or thoroughness of the information contained on this page.