This Peloton Minerals profile is part of a paid investor education campaign.*

Peloton Minerals’ Independence Valley project is being explored by their joint venture partner Kinross Gold Corp. (TSE:K;NYSE:KGC;FWB:KIN2), who has the option to earn a 75 percent interest in the property. The property resides on the southern extension of the Carlin gold trend and hosts the largest untested mineralized rhyolite dome complex in the Spruce Mountain mining district. Kinross and Peloton Minerals are planning a drill program on the property in 2019.

Peloton Minerals’ second project, Golden Trail, is located on the northeastern margin of the Long Canyon gold trend which is defined by Newmont Goldcorp Corp.’s (NYSE:NEM) Long Canyon project. Golden Trail is a sediment-hosted disseminated gold prospect and includes the Golden Trail vein which extends over 1,200 meters in length at surface and is associated with an alteration zone that is approximately 30 meters wide. Additionally, continuous five-foot trench samples taken across the vein returned 13.7 g/t gold and 36.2 g/t silver in one trench and 3.49 g/t gold and 105 g/t silver in another. Peloton Minerals has recently released an updated NI 43-101 technical report on the property.

Peloton Minerals also owns the Silver Bell-St. Lawrence (SBSL) project in Montana. The company has signed an agreement with Frederick Private Equity Corporation (Frederick PEC) who has the option to earn a 75 percent interest in the property. To earn its interest in the property, Frederick PEC is expected to make annual option payments and spend US$2 million in exploration over six years. The SBSL project hosts two past-producing mines that may be contiguous to one another.

Peloton Minerals is led by a strong and experienced management team and board of directors, with most having worked extensively on mineral exploration and development projects around the world. Additionally, management, insiders and strong European private investors notably hold about 75 percent of the company’s shares.

Peloton Minerals’ core projects are all located in Nevada, which is ranked first in the world as an attractive mining jurisdiction by the Fraser Institute. Aside from the state’s attractive political climate and permitting process, it offers exploration and mining companies a low-cost environment. Many of the mineralized zones throughout the state support open-pit mining, heap leaching and gold cyanidation ensuring Nevada’s place as a top gold producer.

In August 2016, Peloton Minerals staked the then-785-acre Independence Valley property in Elko County, Nevada and subsequently added to the property size. Currently, the project consists of 1,160 acres and resides on the Carlin gold trend approximately 79 kilometers south-west of Newmont Goldcorp’s Long Canyon project. The property is also located within the historical Spruce Mountain mining district, which has hosted numerous historic base and precious metal mines since the 1840s. The property also hosts the largest untested mineralized rhyolite dome complex within the district.

In April 2018, Peloton signed an exploration and joint venture agreement with Kinross. Under the terms of the agreement, Kinross can earn a 75 percent interest in the project by spending a total of US$4 million in exploration expenditures over six years. Kinross has also optioned into Renaissance Gold Inc.’s (TSXV:REN) Spruce East project, which is immediately adjacent to the Independence Valley property. 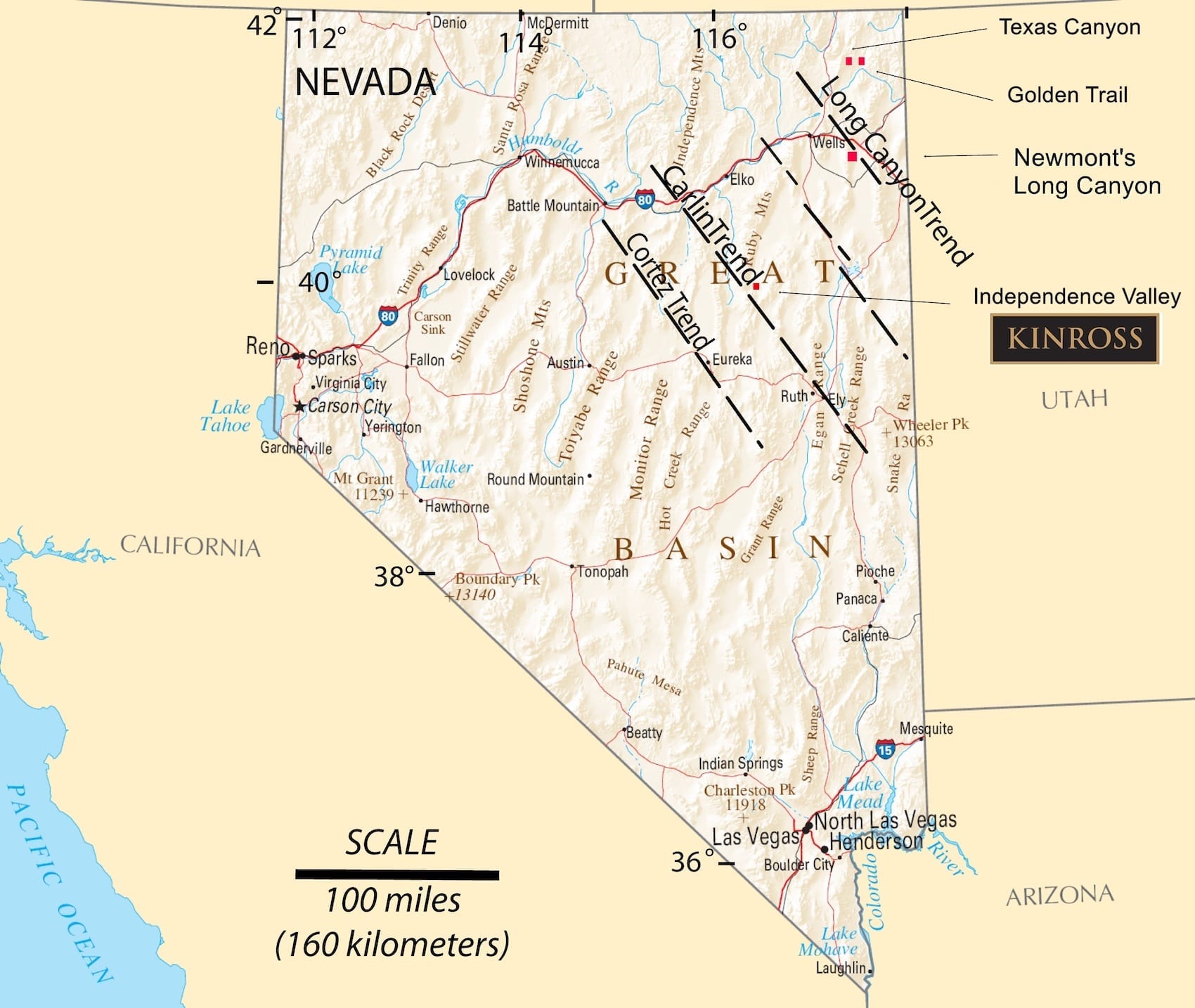 In 2018 Kinross completed extensive surface exploration programs on the property in order to design and budget a drilling program for 2019. The programs included detailed geological mapping, a gravity survey, soil sampling, and an 18 line-kilometer CSAMT geophysical survey. A total of 219 soil samples were taken and a total of 231 gravity stations were completed over the project.

Following analysis of the data a drilling program can be designed and budgeted for 2019. As this work proceeds, Peloton Minerals expects to announce the surface exploration results from 2018, drilling plans, and drilling progress or results over 2019. 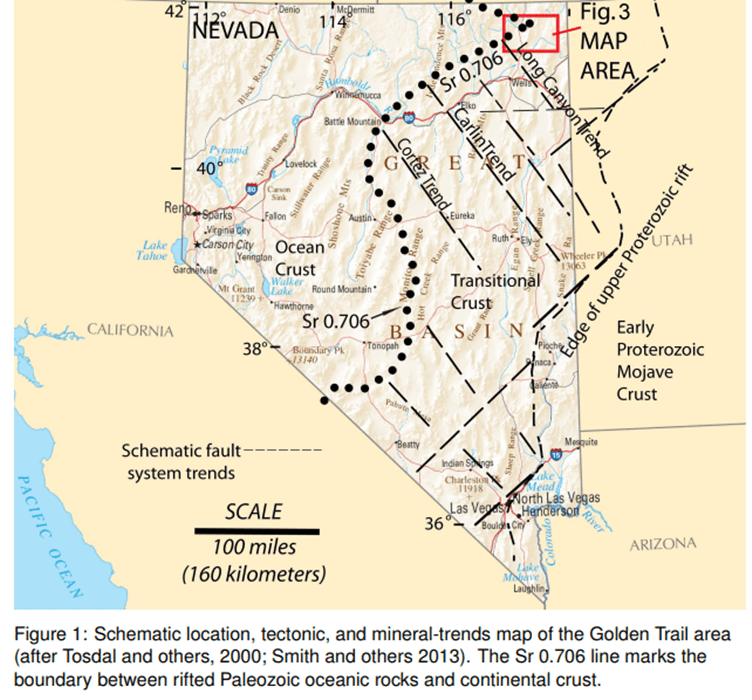 Gold mineralization on the Golden Trail property is generally centered on approximately 10 square kilometres of thermal metamorphism and hydrothermal and or metasomatic alteration. The largest vein identified on the property, the Golden Trail vein, extends over 1,200 meters in length at surface and is associated with an alteration zone that is approximately 30 meters wide. Gold values above 20 ppb are common with several samples assaying above 9 g/t gold and one above 28 g/t gold. Continuous five-foot trench samples returned 13.7 g/t gold and 36.2 g/t silver in one trench and 3.49 g/t gold and 105 g/t silver in a second trench. Elevated silver, arsenic, antimony and thallium values have also been identified in weathered and oxidized outcrop samples.

In addition to extensive surface mapping and sampling work completed on the property, an airborne hyperspectral UV imaging survey was recently completed that identified a significant Carlin-style alteration anomaly on and alongside the property. In April, 2018 Peloton Minerals increased its land package to 880 acres in order to cover the hyperspectral anomaly and also staked the company’s third Nevada project: Texas Canyon. In November 2018, Peloton Minerals released its updated NI 43-101 technical report on Golden Trail.

Moving forward, the NI 43-101 report recommended enhanced scale geologic mapping and a CSMAT geophysical program to precede core drilling. The company plans to complete this work through contractors or potentially through a joint venture with a major company.

Between 2004 to 2009, Peloton Minerals owned the property under a previous management team. In April 2018, Peloton Minerals re-staked the 880-acre Texas Canyon project following an airborne hyperspectral survey the company completed over the area.

Texas Canyon is a Carlin-style project centered on decalcified sedimentary rocks that have yielded surface gold values of over 20 ppb that has been traced for 1,500 meters with anomalous gold and pathfinder elements. The property is centered on a major boundary fault which includes the Jarbidge rhyolite and the tuffs and conglomerates of the Humboldt formation.

The faults and structures associated with this area are thought to be a conduit for mineralizing fluids that altered and replaced the limestone and limestone breccias. This theory is based on extensive data within the company’s possession from the 2004 to 2009 period, as well as the more recent hyperspectral airborne survey. This data includes detailed geologic mapping, a surface magnetic survey, a surface radiometric survey and surface geochemistry which returned values of up to 1,280 ppb gold and 1,660 ppb molybdenum. The airborne hyperspectral survey showed a Carlin-style alteration anomaly over the property at surface.

Moving forward, Peloton Minerals intends to compile the data into a NI 43-101 technical report and set out recommendations for further exploration of the property.

The 390-hectare SBSL project is located approximately four miles southwest of Virginia City, Montana and 50 miles southeast of Butte, Montana. The property is accessible year-round by a public road off Highway 287 with electrical power two miles away.

SBSL hosts two past-producing gold-silver mines that were operated in the early 1900s. The St. Lawrence mine, however, was reactivated in the early 1980s and reportedly produced 0.22 oz/t gold and 3.8 oz/t silver. Smelter receipts for smaller shipments indicate that ore with higher grades was shipped from the mine. Historical production at Silver Bell averaged 0.2 oz/t gold and 15.1 oz/t silver.

The shafts between the two mines are located 3,600 feet apart. The company believes that the two mines shared mineralized systems that could be contiguous to one another. Surface mapping and geological surveying by Peloton Minerals supports this hypothesis and that the vein system at the St. Lawrence mine could strike farther to the east.

Diamond drilling is recommended to further test the continuity of the mineralization between the two mines.

Edward Ellwood is an entrepreneur that specialized in the resource sector with over 30 years of experience building and managing teams in pursuit of mineral exploration or production opportunities. He has built and led a fully-integrated cobalt-nickel chemicals producer, successfully sourced finance resulting in mineral discoveries and served as a senior officer or director of a number of publicly-traded mineral companies.

Eric Plexman has 40 years of experience serving as a senior officer or director of publicly-traded mineral exploration and development companies. He has been involved in projects that range from grassroots exploration to advanced ore delineation, bulk sampling and mineral processing in Canada, the US and Mexico. His specialty is in the unique regulatory and reporting requirements of public mineral companies and is responsible for the daily administration, financial and regulatory compliance of the company.

Paul Teodorovici is responsible for corporate finance and is an important contributor to the company’s business development. He provides the company with a network of international financial contacts that were acquired during more than 30 years of experience as a senior officer or director of resource companies. He has been an integral part of management teams that were responsible for successful start-up, re-organization and merger transactions involving public companies on most of the Canadian stock exchanges.

Richard Capps has over 30 years of field and management experience in gold, base metals, uranium and industrial minerals exploration and development in Nevada, California, Montana, Kansas, Arizona, southeastern US, Suriname and Mexico. He has also been an important team member in the discovery of mines in production today.

John F. O’Donnell, BA (Economics), LLB — Chairman of the Board

John O’Donnell is counsel to the Toronto law firm of Stikeman Keeley Spiegel LLP and is primarily involved in the field of corporate and securities law. He has an extensive background serving as counsel to, or as a director, officer, or chairman of several publicly-listed technology and resource companies with projects located in North America, South America, Africa, Europe, among other jurisdictions.

Luard Manning is a mining engineer with over 40 years of experience working and consulting on mine development and production projects in Canada, Latin America, the US, England and Australia.

Kent Britton is co-owner of a rapidly growing environmental and waste management company servicing the Alberta oil sands and others. Formerly COO, Asia, for one of North America’s leading real estate groups with responsibility for 1,100 staff and six offices spanning four countries. He has 20 years’ experience serving as director or advisor to publicly-traded mineral companies.

Clifford Wiebe is an IT consultant specializing in cloud-based technology systems and business process. He is the architect of Peloton’s global data management system. He has over 23 years of experience in IT and 10 years as a director of publicly-traded mineral companies.

*Disclaimer: The profile provides information which was sourced and approved by Peloton Minerals (CSE:PMC, OTCQB:PMCCF) in order to help investors learn more about the company. Peloton Minerals is a client of the Investing News Network (INN). The company’s campaign fees pay for INN to create and update this profile page, to which links are placed on Investingnews.com and channel newsletters.