This Lithium Chile profile is part of a paid investor education campaign.*

Lithium Chile Inc. (TSXV:LITH, OTC:LTMCF) is a resource company currently exploring 17 wholly-owned lithium-rich properties in the Chilean portion of the lithium triangle. Located in Northern Chile, the lithium Chile properties make up a collective 166,950 hectares, which include 16 salars and one laguna. The properties are all located within a 300-kilometer radius of the Atacama salar, which hosts the largest lithium brine deposit in the world. Lithium Chile is currently conducting preliminary exploration activities on four of its properties.

The lithium triangle is a region that covers areas of northern Chile, northwestern Argentina and southwestern Bolivia which includes the Atacama, Olaroz and Uyuni salt flats. Responsible for 54 percent of global lithium resources, it also represents three jurisdictions with contrasting approaches to lithium exploration. While Bolivia has barely scratched the surface of its lithium resource and Argentina has only recently ramped up exploration activities following the introduction of a more mining-friendly government, Chile has purveyed a strong lithium market for many years. Chile is also far ahead of Bolivia and Argentina when it comes to ease of doing business, levels of corruption, cost of production and facilitating entry for foreign companies.

Lithium Chile entered this lithium-rich region in 2015 with the staking of 11 of its 17 properties and immediately conducted a surface sampling program of which all samples ranged from 400 ppm lithium to 1,400 ppm lithium. With these results, the company established six target properties—Coipasa, Ollague, Helados, Atacama, Talar and Turi—which have undergone geophysical surveying. Initial drill programs are currently underway across the six properties. Lithium Chile expects to release initial resource estimates for its projects in the near term.

Lithium Chile is led by a strong management team with over 100 years of experience between its members and unprecedented knowledge of the Chilean jurisdiction. Collectively, management holds 63 percent of the company’s shares.

17 Chilean lithium-rich properties making up 166,950 hectares in the lithium triangle 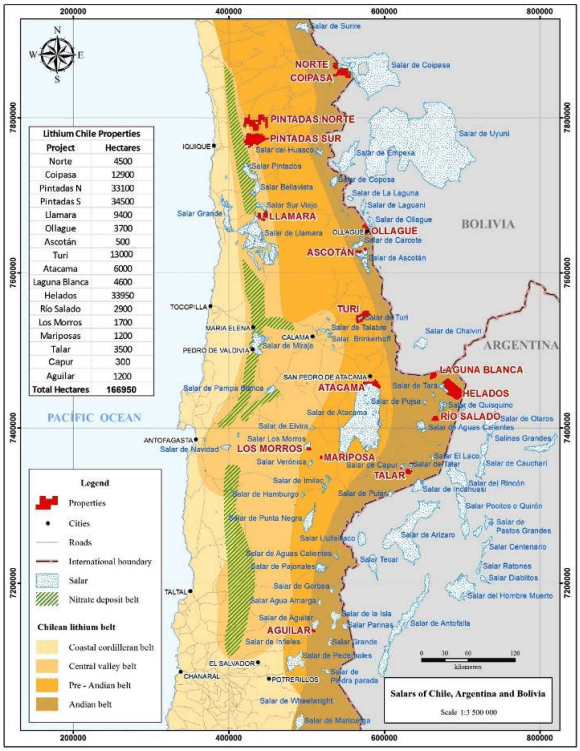 At only $3.00 per hectare, the staking costs of the properties totaled $162,000 and maintenance costs for all projects remain low. There are also no outstanding work commitments on any of the properties. Since the acquisition, Lithium Chile has conducted sampling on all the projects and this effort helped establish the target properties for geophysical surveys. While the geophysical analysis and drilling of these projects are underway, Lithium Chile is looking to establish maiden NI 43-101 resource estimates on its key properties.

Coipasa is an 11,300-hectare property on an Andean salar belt on the border of northern Chile and Bolivia. Lithium Chile currently controls approximately 90 percent of this prospect. Preliminary exploration shows a range of results measuring 310 mg/L to 1,410 mg/L lithium.

The Helados project is made up of 22,700 hectares and sits on the border of Chile and the northwest corner of Argentina, on an Andean salar belt and less than 100 kilometers from the Atacama salar. Lithium Chile added an additional 2,000 hectares to the project in November 2018. Preliminary exploration has produced results ranging from 390 mg/L to 1,280 mg/L lithium. The property also hosts a lake where water samples tested 1,100 ppm lithium.

As part of the geophysical survey conducted across the top properties, Lithium Chile uncovered a 60-square-kilometer high-priority target area. The company has described this zone to be an open-ended, low resistivity area that sits within the northwest-trending axis of the Salar Tara-Laguna Helada basin. The zone shows comparable characteristics to the main aquifers at the Salar de Atacama.

The Atacama project is a 5,600-hectare property which sits on the border of the Atacama salar, just over 30 kilometers away from the Chilean border with Argentina. Near-surface samples from recent exploration work on the property have shown samples of up to 1,330 mg/L lithium, grades that are comparable to production grades at SQM and Albemarle Salar de Atacama plants.

The geophysical survey on the Atacama project identified multiple open-ended horizontal zones that vary from 50 to 75 meters in thickness. The company believes that these zones host resistivity values of less than three ohms and have geophysical characteristics similar to the lithium-rich aquifers at the Salar de Atacama.

The same geophysical survey also uncovered multiple target areas within the 2,200-hectare Ollague project, which boast chemistry ratios of 0.1 lithium to potassium and 7.1 magnesium to lithium. The uncovered regions included open-ended horizontal zones varying from 20 to 200 meters in thickness, within 20 to 120 meters from the surface.

In the company’s 2018 drill program at Ollague, Lithium Chile encountered an aquifer-hosting lithium-bearing brines at a depth of 110 meters that continued to a depth of 290 meters. The 180-meter brine zone returned grades of up to 480 mg/L lithium.

Talar is a 3,500-hectare project that sits on an Andean salar belt, less than 40 kilometers away from the Chile and Argentina border. The project’s preliminary exploration results range from 290 mg/L to 740 mg/L lithium.

Following the results of an extended TEM geophysical survey, Lithium Chile discovered that the highly-conductive anomaly extended past the current boundaries of the Turi project and was wider and thicker than previously believed. The discovery led to the staking of an additional 5,400 hectares to cover the anomaly extension, increasing the property size to 13,000 hectares. With community approval in hand, Lithium Chile intends to conduct a three-hole drill program across the property in the near term.

Preliminary results across the properties have shown promising salar chemistry with moderate magnesium to lithium ratios ranging between 2:6 and 7:8. 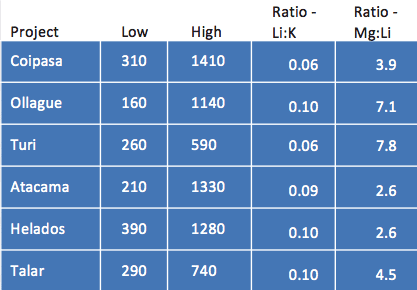 Steven Cochrane has 36 years of investment industry experience during which he has participated in raising in excess of $500 million for a variety of small cap public companies in various businesses and industry sectors including mining. In addition to having been associated with numerous domestic transactions, he has also been involved with many international opportunities—primarily in China as well as in Cambodia.

Al Kroontje has more than 45 years of experience in the natural resources sector, focused on the mining, oil and gas industries.

Terry Walker is a highly-experienced geologist and a leading expert in hydrogeology. He has spent over 25 years in Chile’s mining industry and is well-connected throughout the sector.

Jeremy Ross has over 20 years of experience in venture capital and marketing for small-cap to mid-tier mining and oil and gas companies. He has planned and implemented numerous marketing campaigns, and was the Corporate Development Consultant for Fission Energy, which was named a Top 50 TSXV company for its performance, prior to the completion of the sale in 2013 with Denison Mines. Following the sale to Denison Mines, he went on to be a Director of Fission Uranium Corp from 2013 to 2017.

With an extensive network of contacts in the institutional and capital markets space as well as strong relationships with individual investors, he has raised over $200 million for TSXV-listed companies. In addition, he also headed up corporate development for Able Auctions and Smart Tire systems, both of which graduated from the OTC-BB to the Amex stock exchange (NYSE).

Jose de Castro Alem is a recognized pioneer in lithium brine exploration, development and production in South America. He brings over 20 years of lithium brine experience, as well as a significant track record in the lithium triangle, to the Company’s management team.

Ken Booth joined Lithium Chile in February 2018. He has been the President of Highwood Advisory Services Inc., a financial consulting firm, since February 1999. Previously, he was Vice President Investment Banking with RBC Dominion Securities Inc. in Toronto and Vancouver, specializing in corporate finance for the mining industry and a member of the mining group of Nesbitt Burns Inc. Booth holds an MBA from St. Mary’s University and a Bachelor of Science from Carleton University. He is a Director of Angkor Gold Corp., NV Gold Corporation and Redstar Gold Corp., which are listed on the TSXV.

The information contained here is for information purposes only and is not to be construed as an offer or solicitation for the sale or purchase of securities. Readers should conduct their own research for all information publicly available concerning the company. Prior to making any investment decision, it is recommended that readers consult directly with Lithium Chile Inc. and seek advice from a qualified investment advisor.

4 Top Canadian Lithium Stocks of 2020
Antofagasta to Leave Los Pelambres on Care and Maintenance
4 Gold Stocks to Watch in 2020
Silver and COVID-19: Who’s Reacting and How?
Request an Investor Kit: