*This profile is part of a paid investor education campaign.

The HeyBryan app is designed to disrupt the Canadian home service industry by tapping into the growing gig economy, a group of professionals that offer contract or freelance services. HeyBryan Media has rolled-out the app in British Columbia’s Lower Mainland and the Greater Toronto Area to date and has plans to expand its presence throughout Canada. Once firmly established in Canada, the company plans to launch the app in the US.

As an end-to-end solution, the app allows homeowners to book tasks for a variety of services while also using the app to make payments and ask questions through the online chat feature. HeyBryan Media receives a 27.5 percent margin on each task completed. The customer is charged a 7.5 percent trust and support fee, which goes towards liability insurance, and 20 percent is from the home service expert.

HeyBryan Media incentivizes its experts by asking for customer reviews. The more good reviews an expert receives, the higher they are ranked on the app, ensuring that the expert and HeyBryan Media book more jobs and make more money.

Aside from the business that the company’s sponsor draws in, HeyBryan Media has expanded its customer base nine-fold since the beginning of the year and its experts by 518 percent. The company’s sponsor, Canadian HGTV personality Bryan Baeumler, is a widely recognized home-maintenance expert and has been featured in multiple hit shows for over seven years.

The Market for Home Maintenance

Like a car, homes also need to be regularly maintained to keep them “healthy” and to avoid major repairs in the long term. According to Statista, there were 126 million households in the US, and according to Statistics Canada, there are 14 million households in Canada. Each of these households will need to perform some type of home maintenance activity, creating a large market for home maintenance service providers.

In 2018, Americans were expected to spend 7.5 percent more on home remodeling due to the strong housing market. The increase in home improvement was also attributed to restoration and rebuilding efforts in natural disaster areas in the southern US states and Puerto Rico.

Despite the dreary outlook for the global economy, house maintenance is not expected to be affected. People tend to funnel money into their most expensive asset – their house. Lower interest rates and a wave of foreign investment in the US during the 2008 recession stimulated residential construction activities and resulted in an increase in employment in the housing industry.

HeyBryan Media aims to disrupt the Canadian, and eventually US, home service industries with its HeyBryan app. HeyBryan is a new mobile marketplace targeting the growing gig economy.

According to Investopedia, gig economies are comprised of temporary, flexible jobs. Within a gig economy, companies tend to hire independent contractors and freelancers instead of full-time employees. This type of economy has multiple benefits for contractors and freelancers as it offers a better work-life balance and brings in extra cash without a significant time commitment.

According to MBO Partners, approximately 41 million adult Americans work as freelancers or contractors who work independently to build businesses, develop their careers and supplement their incomes. This provides a large labor pool for HeyBryan Media to source experts for the company’s app.

HeyBryan Media has developed an app that enables people to book small tasks around the home effortlessly. The app matches homeowners with top-quality, local, vetted and approved home-service experts. All HeyBryan experts are screened, vetted and interviewed for a homeowner’s peace of mind.

Here’s how it works: 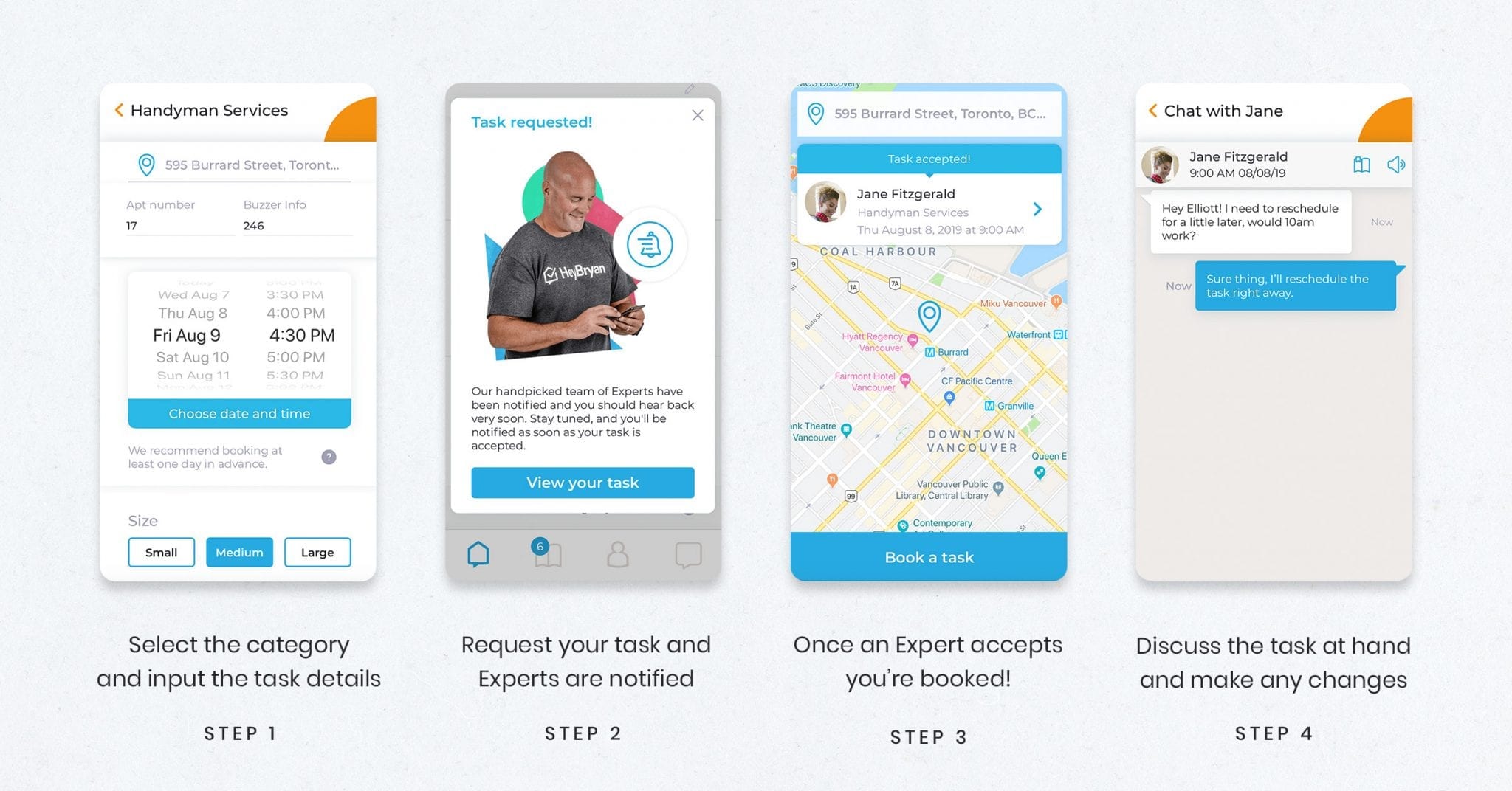 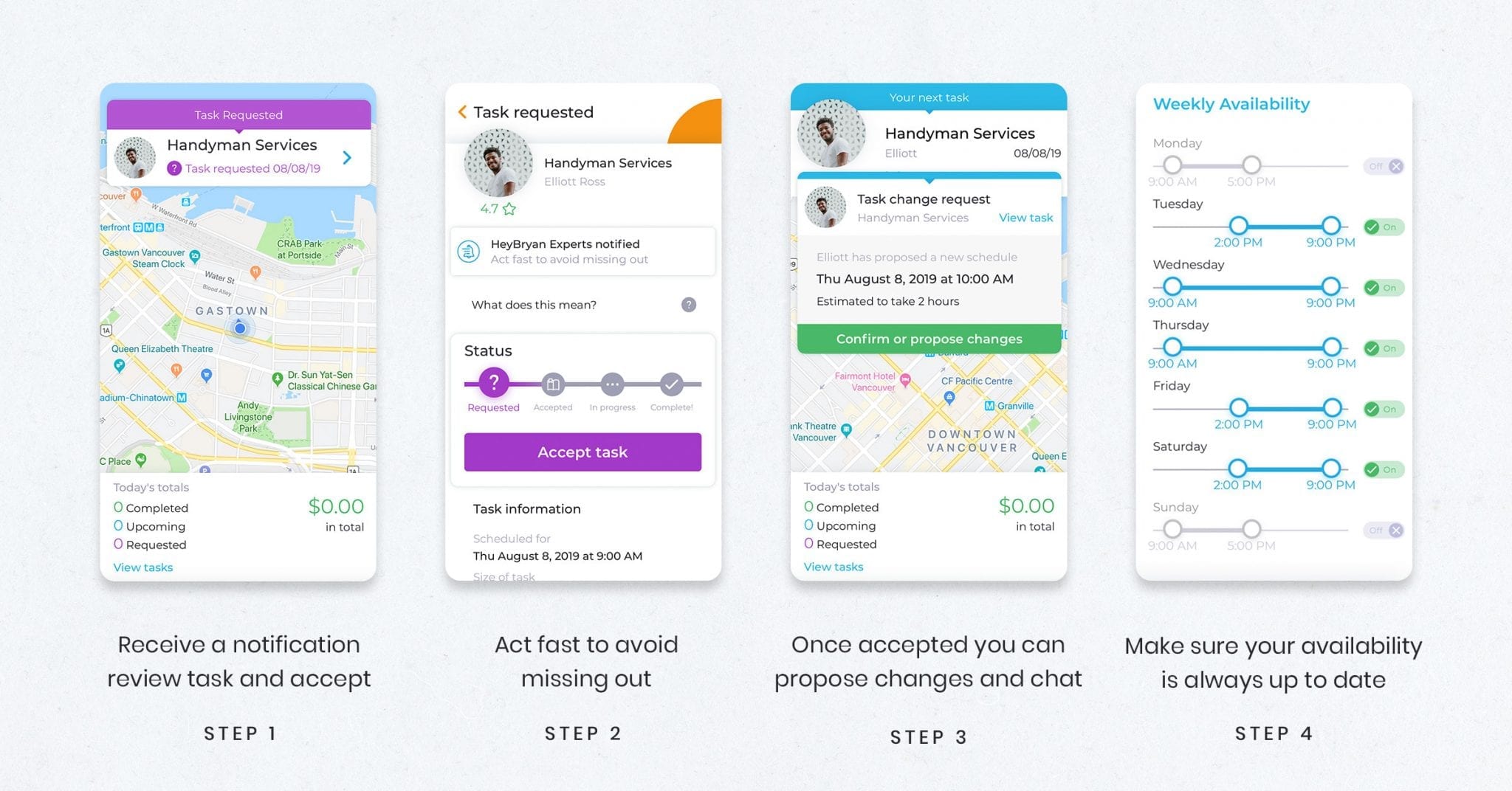 Homeowners can book and complete tasks in anything from home cleaning, appliance repair, junk removal, plumbing, painting, electrical or general handyman services, among others. The app makes the booking process quick and straightforward and offers live chat and secure payment functionalities. The app also provides homeowners with up to C$1 million in insurance.

The HeyBryan app is currently available in British Columbia’s Lower Mainland and the Greater Toronto Area. HeyBrian Media intends to scale the platform and expand its presence throughout Canada before expanding into the US.

Through the app, HeyBryan Media provides peer-to-peer services. The company receives a 27.5 percent margin off of each task completed. The customer is charged a 7.5 percent trust and support fee, which goes towards liability insurance, and 20 percent is from the home service expert. HeyBryan Media incentives its experts by asking for customer reviews. The more good reviews an expert receives, the higher they are ranked on the app, ensuring that the expert and HeyBryan Media book more jobs and make more money.

As of October 2019, HeyBryan Media has expanded its customer base nine-fold since the beginning of the year. Its expert base has experienced a growth rate of 518 percent in the same timeframe.

HeyBryan Media has partnered with Canadian HGTV personality Bryan Baeumler, bringing the app to the attention of millions of homeowners across North America. Baeumler is a widely-recognized home-maintenance expert and has been featured in multiple hit shows for over seven years. He is also a significant shareholder in the company. 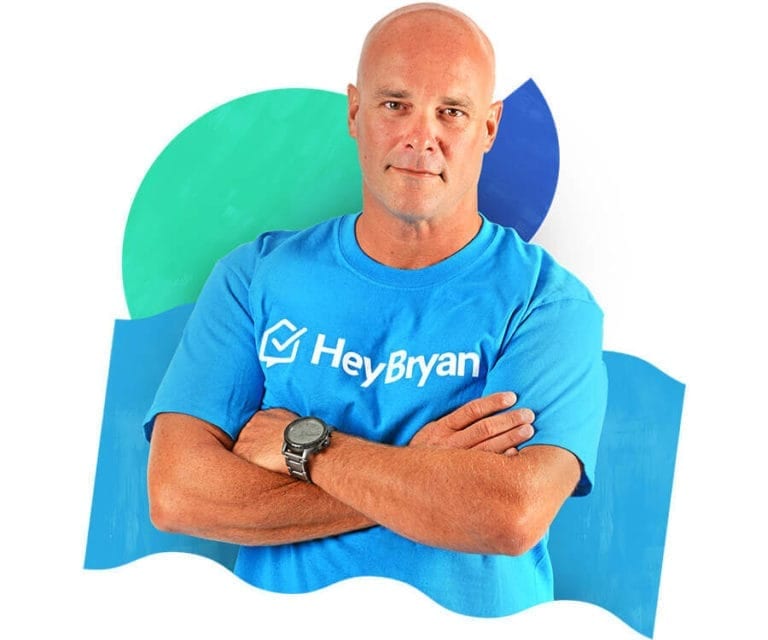 Ken began his career in creative and design studios, where he achieved success as a creative director, strategist, copywriter, translator and editor. He then held a progression of senior leadership roles within the global interactive function of Monster Worldwide, in both North America and Europe, and launched a range of innovative multi-channel initiatives as VP Marketing with a global franchisor.

Currently a consultant and outside executive, Ken draws on the breadth and depth of his international B2B/B2C experience, multidisciplinary skill set and subject matter expertise in adtech, media, martech, content and analytics to help brands position for success and go to market.

Blair Jordan brings extensive capital markets and financing experience to HeyBryan, having spent five years as Managing Director of Investment Banking at Echelon Wealth Partners, and another nine years at Credit Suisse. He also worked at PriceWaterhouseCoopers and Bennett Jones, having obtained a law degree from UBC and an MBA from the University of Chicago’s Booth School of Business. He is an active participant in the Canadian capital markets, and specializes in working with high-growth companies undergoing rapid commercial growth.

Mike Stulp is currently the CFO of the Baeumler Group of Companies, overseeing Baeumler productions and distribution in over 30 countries. He has over 15 years of experience in financial management and a proven track record of increasing EDITDA through cost reduction and efficiency improvements. He was part of the management team that ran Canada’s number one multifamily office, according to Euromoney Institutional Investor.

Margaris is a speaker at international fintech and insurtech conferences, and he publishes articles on his innovation proposals and thought leadership. He published an AI white paper, “Machine learning in financial services: Changing the rules of the game,” for the enterprise software vendor SAP.

The information contained here is for information purposes only and is not to be construed as an offer or solicitation for the sale or purchase of securities. Readers should conduct their own research for all information publicly available concerning the company. Prior to making any investment decision, it is recommended that readers consult directly with HeyBryan Media Inc. and seek advice from a qualified investment advisor.