The company is currently earning an 80 percent interest in the Ball Creek property, which surrounds the Hank project.  The property hosts four copper porphyry systems with similar geological settings to the Red Chris, KSM, Spectrum, GJ and Snip mineral deposits as well as four epithermal gold-silver targets. Since acquiring the project and part of its initial exploration program, Golden Ridge Resources has added 60 kilometers to the strike length of the Main zone, collected 4,000 samples and identified multiple new copper-gold porphyry, skarn and VMS occurrences.

Golden Ridge Resources is acquiring the Royalle project, which is located in the Bralorne mining division in British Columbia. The property rests along trend from the Bralorne, Pioneer and King mines which produced 4.15 million ounces of gold between 1928 and 1971. Moving forward, Golden Ridge Resources intends to conduct an exploration program to test for high-grade gold and silver mineralization.

The North Canol property is located in the Yukon and is adjacent to Fireweed Zinc’s Tom and Jason deposit on the Macmillan Pass project. Fireweed Zinc is currently funding exploration on the property as part of the company’s regional exploration program.

Golden Ridge Resources acquired a 100 percent interest in the Hank gold-silver project from Barrick Gold (TSX:ABX) in 2018. The 1,700-hectare Hank project is located approximately 140 kilometers north of Stewart, British Columbia in the province’s prolific Golden Triangle. The property is 15 kilometers west of Highway 37 and the 387-kilovolt Northwest transmission line from Terrace. 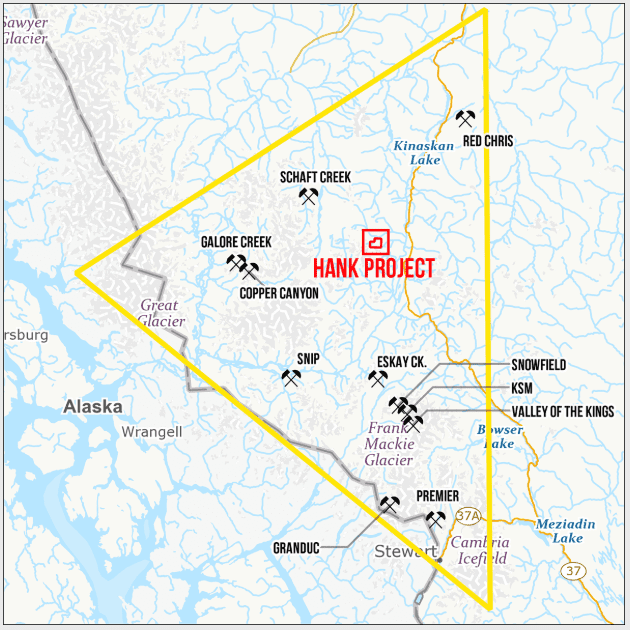 Previous operators have identified a four-kilometer-long by two-kilometer-wide in soil gold anomaly with values up to 7.2 g/t gold. Two main alteration zones have also been mapped on the property: the upper alteration zone (UAZ) and the lower alteration zone (LAZ). Both zones contain highly anomalous gold values that are surrounded by high-grade polymetallic veins.

In 1985, Lac Minerals Ltd. completed a shallow drill program at the UAZ that outlined a small area that has a resource of 50,000 ounces of gold grading between 2.5 g/t gold and 4.5 g/t gold. Most of the historical work on the property focused on the UAZ, leaving the 4.5-kilometer-long LAZ mostly untested. 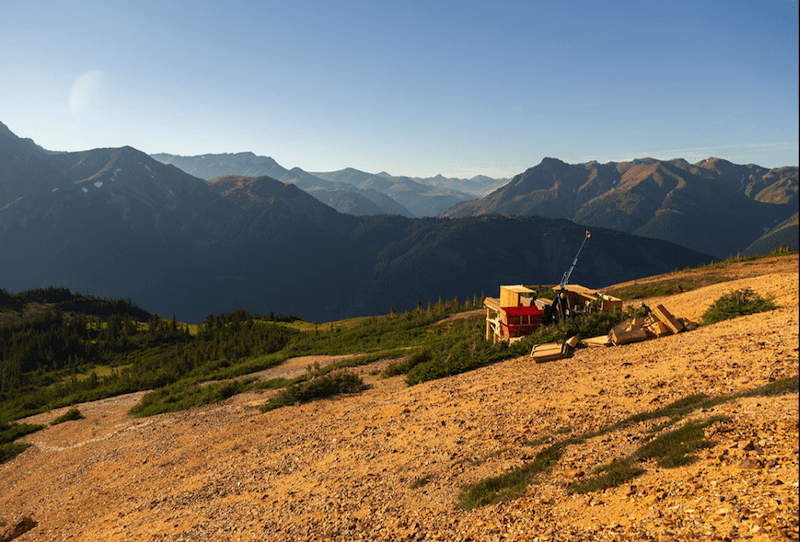 In 2014, Golden Ridge Resources completed a soil sampling program, an airborne magnetic survey and Terraspec analysis of bedrock samples around the historic grid. Reconnaissance soil sampling was conducted in 2016 and resulted in the identification of a significant copper-silver anomaly, now known as the Williams zone. The anomaly was coincident with a magnetic anomaly identified in the 2017 survey. A high-resolution 3D IP survey was also conducted over parts of the UAZ and LAZ and generated several additional drill targets.

Golden Ridge Resources also carried out a ground magnetic survey at the Williams zone which resulted in a well-defined magnetic anomaly that matched with high soil geochemistry. The survey was followed up with trenching which discovered, what can be interpreted as the core of the porphyry copper-gold system.

In 2018, the company completed an IP survey and drill program on the property. The IP survey outlined an 800-meter-wide chargeability anomaly at the Williams zone. The anomaly is interpreted to plunge to the south towards the LAZ and expands to over 1.6 kilometers in width. The target remains open to the north, south and at depth.

The company intersected 327 meters grading 0.31 percent copper, 0.35 g/t gold and 1.94 g/t silver in the discovery hole at the Williams zone. The discovery currently has a strike length of 200 meters and a depth of 585 meters and remains open along strike and to depth. 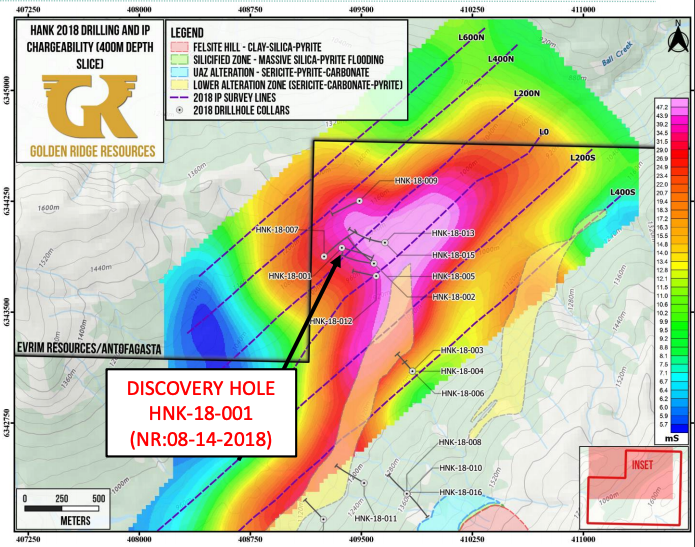 Golden Ridge Resources commenced its 2019 drill program at Hank in June. The focus of the program is on expanding on the two discoveries made in 2018 at the Williams and Boiling zones. Highlights from the program include 380.5 meters grading 0.28 percent copper, 0.22 g/t gold and 1.43 g/t silver. 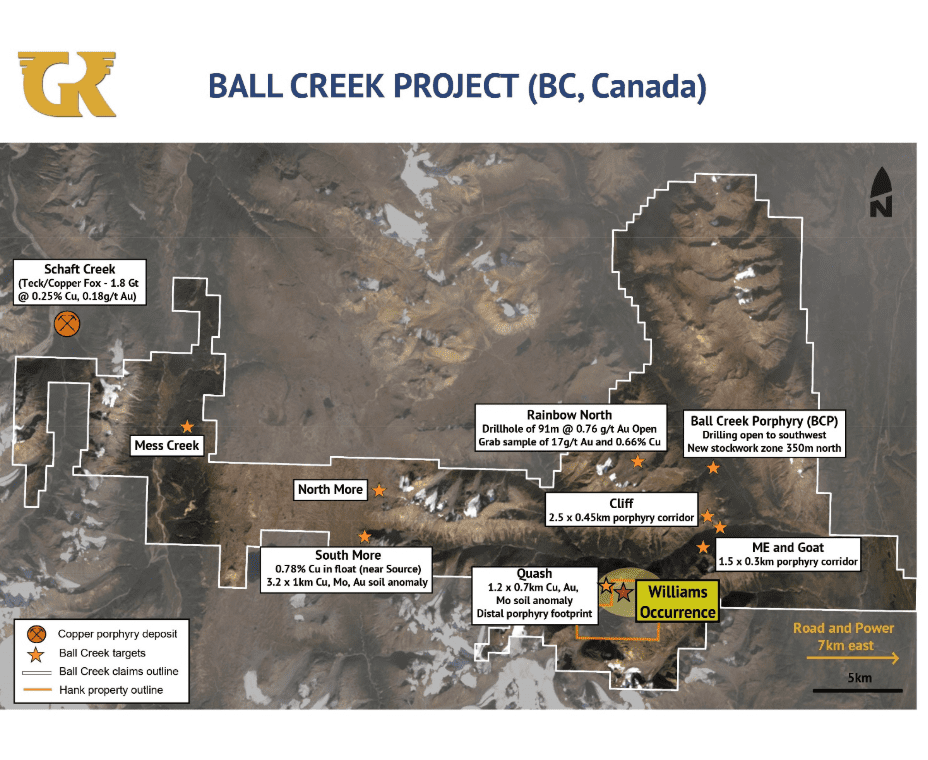 In August 2019, Golden Ridge Resources commenced an initial work program on the Ball Creek project. The program is to be comprised of regional geochemical sampling, deep diamond drilling and preliminary prospecting and mapping. To date, the company has added 60 kilometers to the strike length of the Main zone, collected 4,000 samples and identified multiple new copper-gold porphyry, skarn and VMS occurrences.

Golden Ridge Resources has the option to acquire a 100 percent interest in the Royalle gold-silver project. The company can earn its interest by issuing 480,000 common shares and $160,000 in cash to the vendors and by spending $580,000 in exploration over four years.

The property is located along trend from the Bralorne, Pioneer and King mines which produced 4.15 million ounces of gold between 1928 and 1971. The project is accessible year-round by the Lillooet-Pioneer road, providing the company with the option to drill in the winter. 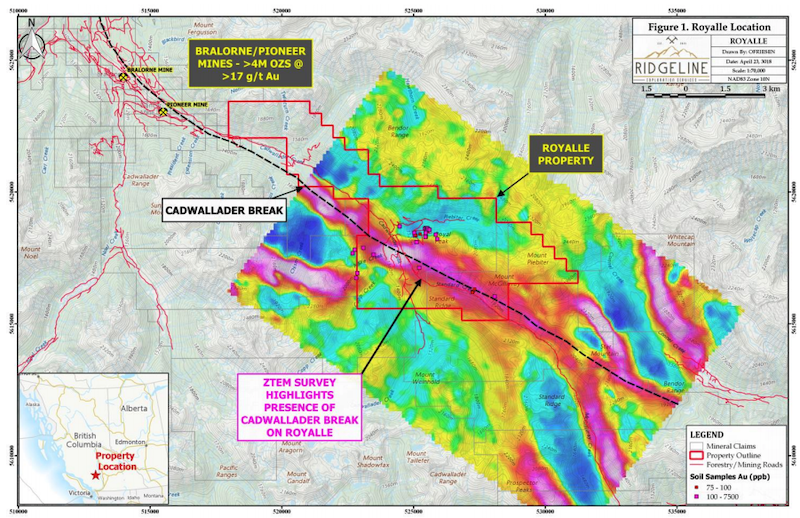 In March 2018, Golden Ridge Resources optioned its North Canol property to Fireweed Zinc Ltd. Under the terms of the agreement, Fireweed Zinc can earn a 100 percent interest in the property by paying an aggregate $500,000 in cash and by issuing 450,000 common shares. A two percent cobalt NSR on the project was sold to Cobalt 27 Capital Corp. (TSXV:KBLT).

The 18,080-hectare North Canol cobalt–zinc project is located in the Mayo mining division in the Yukon. The property is 162 kilometers northwest of Ross River, 360 kilometers northeast of Whitehorse and adjacent to Fireweed Zinc’s Tom and Jason deposit on its Macmillan Pass project. 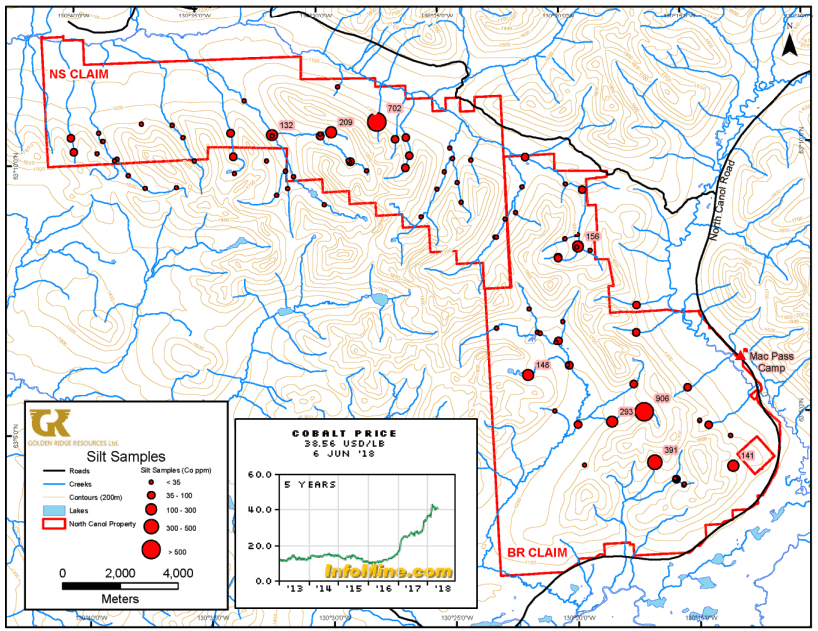 The property was initially explored for sedex zinc-lead-silver-barite, bedded barite, intrusion-related gold and sediment-hosted gold deposits. A re-evaluation of the project in 2017 highlighted over 20 kilometers of highly-anomalous cobalt and zinc in streams and creeks. Cobalt in silt values up to 906 ppm have been recovered on the property.

Fireweed Zinc is currently funding exploration on the property as part of the company’s regional exploration program. 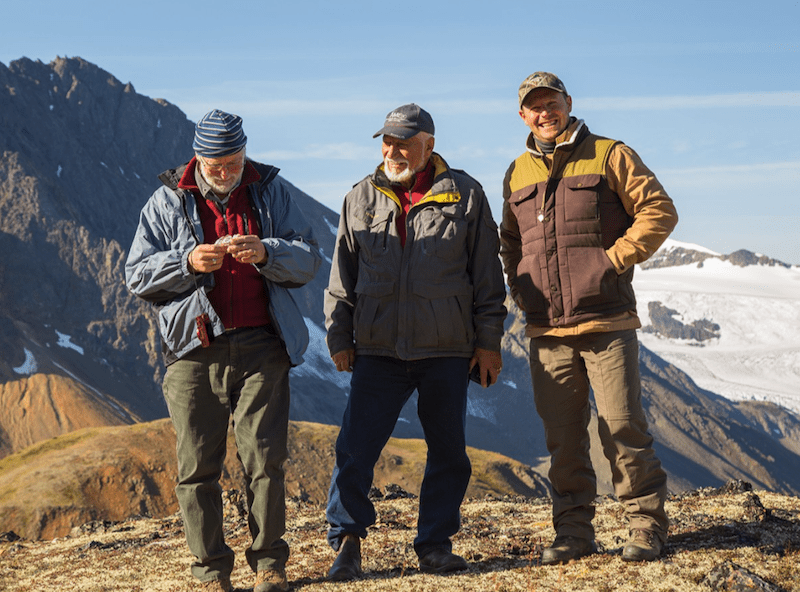 Larry Nagy obtained a B.A degree in Geological Sciences from the University of Saskatchewan in 1966. He provides broad international exploration experience from his past management of several successful listed junior resources companies.

After graduation, he spent 16 years employed by Cominco Ltd., an exploration company with projects in Western Canada and Australia, he was a co-founder of Keewatin Engineering Ltd., a Vancouver-based geological consulting company and was responsible for managing exploration projects worldwide. As a director of Delaware Resources, he was responsible for Delaware’s acquisition and development of the SNIP property, a gold project in central British Columbia which he originally identified for re-staking while employed by Cominco Ltd. He also served as a Director of Calpine Resources. Ltd., the company optioned the Eskay Creek gold property and subsequently discovered one of the largest and richest gold-silver deposits in North America. While serving as president and CEO of Oliver Gold Corporation, he led the team that discovered the SEGALA gold deposits in Mali, West Africa and Ipanema gold deposit in Zimbabwe. Nagy was also the president and CEO of Solomon Resources Ltd. which co-discovered the Bombore gold deposits in Burkina Faso with Channel Resources Ltd. These deposits were sold to Ore Zone Ltd. and are currently being prepared for production.

Mike Blady holds a B.Sc. in Geology from Simon Fraser University and is the principal and founder of Ridgeline Exploration Services Inc., an exploration services company based in Kelowna, British Columbia. He has been involved in senior management of numerous public companies providing corporate development services. Blady’s senior management experience with resource companies gives him an appreciation of the best industry practices with respect to financial risk control and disclosure.

Dr. Lindqvist is presently a director of Colorado Resources Ltd. and Damara Gold Corp. In the past, he served as the Vice President of Exploration for Homestake Mining Company, and as the Executive General Manager of Exploration for Newcrest Mining Limited. He has a PhD in Applied Geology from the Royal School of Mines in London and is a member of the SEG and AIME.

Chris Paul holds a B.Sc. in Geology from Simon Fraser University and a Dipl.Tech. in Mining from BCIT. He has worked on all scales of exploration throughout British Columbia and the Yukon since 2009 and is a co-founder of Ridgeline Exploration Services Inc. He has overseen all aspects of the geological programs on the Hank property since getting involved with Golden Ridge in 2016. He also continues to manage and oversee all technical aspects of the company’s projects.

Terese Gieselman has 32 years of experience with junior mining and exploration companies listed on the TSX, TSXV, OTCBB, NASDAQ and AMEX, in the role of Chief Financial Officer, Treasurer and Corporate Secretary. During her tenure in the resource sector, she has accumulated an extensive background in corporate and financial reporting and compliance for Canada and the US, including particularly relevant experience in financing, treasury, international corporate structures and financial reporting in Mexico, Peru, Chile, Argentina and Zimbabwe.

Duane Lo is a financial executive in the mining industry with 20 years of experience in financing, business development, management and administration of mining operations and development projects in multiple jurisdictions including the US, Africa, Brazil and Mongolia. Currently, he is the Chief Financial Officer of Entrée Resources Ltd and recently was the CFO of Mason Resources Corp, which was sold to Hudbay. Prior to Entrée Resources Ltd. and Mason Resources Corp., he was the Executive Vice President and Chief Financial Officer of Luna Gold Corp., which built and operated a gold mine in Brazil. Previous to Luna, he was the Corporate Controller for First Quantum Minerals Ltd. between 2004 and 2009. Lo was also employed at Deloitte in the assurance and advisory practice and holds a Canadian Chartered Professional Accountant (CA) designation from the Institute of Chartered Accountants of British Columbia.

Elston Johnston received a B.Sc. in Electrical Engineering (Hons.) from the University of New Brunswick in 1976, and is a member of the following six Canadian Engineering Associations: EGBC, EGA, EGS, EGM, PEO and EGNS. For the past 25 years, he has been President and owner of a successful consulting engineering company located in Vancouver, British Columbia. He has been involved with business and industry worldwide both as a consulting engineer and as an entrepreneur. For more than 30 years, he has been a major shareholder and/or has served as Consultant, Director, President, COB, CEO or CFO of several TSX and TSXV-listed companies, including several focused on mineral exploration.

The information contained here is for information purposes only and is not to be construed as an offer or solicitation for the sale or purchase of securities. Readers should conduct their own research for all information publicly available concerning the company. Prior to making any investment decision, it is recommended that readers consult directly with Golden Ridge Resources Ltd. and seek advice from a qualified investment advisor.