From Discovery to Potential Cash Flow

This ExGen Resources Inc. profile is part of a paid investor education campaign.*

ExGen Resources Inc. (TSXV:EXG,OTC Pink:BXXRF) is pursuing a project accelerator business model, bringing partners to fund exploration and development activities on its projects. The company currently has six projects, all located in mining-friendly jurisdictions in North America which cover the exploration spectrum from drill-ready to extensively-drilled with a historical resource. The project accelerator business model provides shareholders with exposure to the entire mining cycle, from new discoveries to advanced exploration and cash flow visibility. The use of partners to fund property expenditures also reduces the technical and financial risks typically associated with mineral exploration and development.

ExGen’s flagship development-stage asset, the Empire Mine property, has been optioned out to Phoenix Global Mining Ltd. (LON:PGM,OTCQX:PGMLF), an AIM-listed mining company focused on base and precious metal development in North America. The Empire Mine property is located in Custer County, five kilometers from MacKay, Idaho. ExGen owns a 20 percent carried interest in the project until the start of construction, a 2.5 percent net smelter royalty (NSR) and 3.4 percent of Phoenix common stock. This makes ExGen the second-largest shareholder in Phoenix.

As the current operator, Phoenix is scheduled to release an updated resource estimate as well as a feasibility study in the near term. The Empire Mine has shown significant blue-sky potential as a result of the ongoing step-out and regional exploration program, which has expanded the strike length to 3.5 kilometers. Recent step-out drilling has also shown significant copper grades of more than 10 percent over 1.5 meters, providing evidence of a high-grade sulfide system under the existing oxide resource.

The existing NI 43-101 resource estimate for the surface oxide zone at the Empire Mine includes the following:

ExGen Resources has optioned its Gordon Lake gold property in the Northwest Territories, Canada to Blue Lagoon Resources Inc. (CSE:BLLG). Gordon Lake has seen limited historical exploration work. However, a regional-scale geophysical anomaly has been identified on the property, which includes a strike length of one kilometer. Blue Lagoon Resources has the option to acquire an 80 percent interest in the property in an agreement that includes C$250,000 in exploration expenditures during the first year of the option, cash payments and shares of BLLG. In addition, upon exercise of the option, Blue Lagoon will grant ExGen a 2.5 percent net smelter return royalty.

In April 2015, ExGen Resources earned a 100 percent interest in the 1,837-acre Empire Mine property located five kilometers away from Mackay, Idaho. During 2015, ExGen optioned the property to Phoenix Global Mining Ltd, an AIM-listed mining company focused on base and precious metal development in North America. Since then, Phoenix has spent in excess of $20 million on the Empire Mine property and is required to fund 100 percent of all expenditures until the start of construction. Until that time, ExGen holds a 20 percent carried interest and a 2.5 percent NSR. 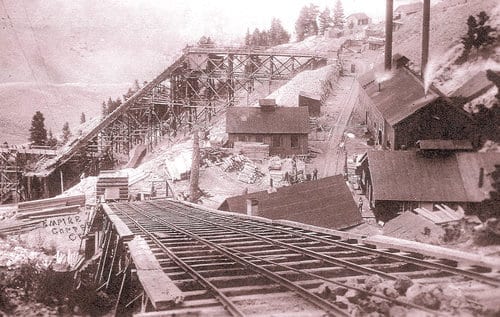 Between 1901 and 1942, the historic Empire mine reportedly produced 694,000 tonnes grading 3.64 percent copper, 1.65 g/t gold and 53.9 g/t silver. Previous work on the property, identified a strike length of 1,200 meters between six to 70 meters thick and to a depth of over 300 meters containing oxide and sulphide copper mineralization. Between 1964 and 1975, various exploration companies completed a total of 151 drill holes at the AP pit.

From 1995 to 1997, Cambior Exploration USA Inc. completed 7,350 meters of drilling at the AP pit area. A historical estimate was internally created by Cambior’s geologist in 1996-1997. The resource was focused on the AP pit area and used a 0.15 percent copper cut-off. The resource outlined an indicated resource of 18.23 million tons copper oxide grading 0.49 percent copper, 0.19 percent zinc, 13.5 g/t silver and 0.51g/t gold with an additional 9.65 million tons of material grading 0.29 percent copper and 0.31 percent zinc with no precious metals.

Additionally, Cambior determined that the deposit was amenable to mining by open pit methods with a relatively low strip ratio. However, Cambior relinquished the property in 1999 due to low commodity prices and other financial commitments.

Between 2006 and 2011, Musgrove Minerals Corp. completed an additional 8,383 meters of in-fill drilling at the Empire property, within the 47-hole drill block that Cambior had previously outlined.

Overall results from the exploration initiative demonstrated mineralization across 3.5 kilometers of strike length, with the current resource encompassed within one kilometer of the 3.5-kilometer strike length. 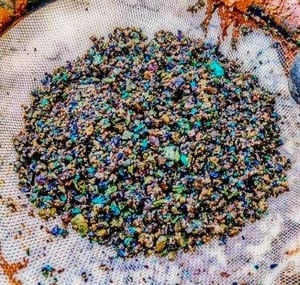 Exploration is ongoing at the Empire mine project. Future initiatives include a drilling program at the Horseshoe claim block, pending approval from the US Forest Service. Through ongoing drilling and exploration programs, Phoenix Global and ExGen Resources are working towards completing an updated resource and a BFS for the property. The BFS is estimated to be completed in the next 12 months.

Between 1987 and 1988, Aurum Geological Consultants Inc. completed a work program consisting of diamond drilling, line cutting, magnetic and VLF-EM surveys, mapping, prospecting and limited channel sampling for Pacific Trans-Ocean Resources Ltd. In 1988, a total of 5,261 meters of core drilling, with a reported core recovery rate between 95 to 100 percent, was completed on the Main, South and Union zones by Pacific Trans-Ocean.

In early 1988, Dighem Geophysical Inc. completed an airborne electromagnetic and magnetic survey over a large portion of the Gordon Lake area. In 1994, Keylock Resources Ltd. optioned the property and was able to complete a detailed channel sampling program over the Main, South and Union zones.

The highlights for the Gordon Lake property include the following:

Intersections from these drill cores include the following: 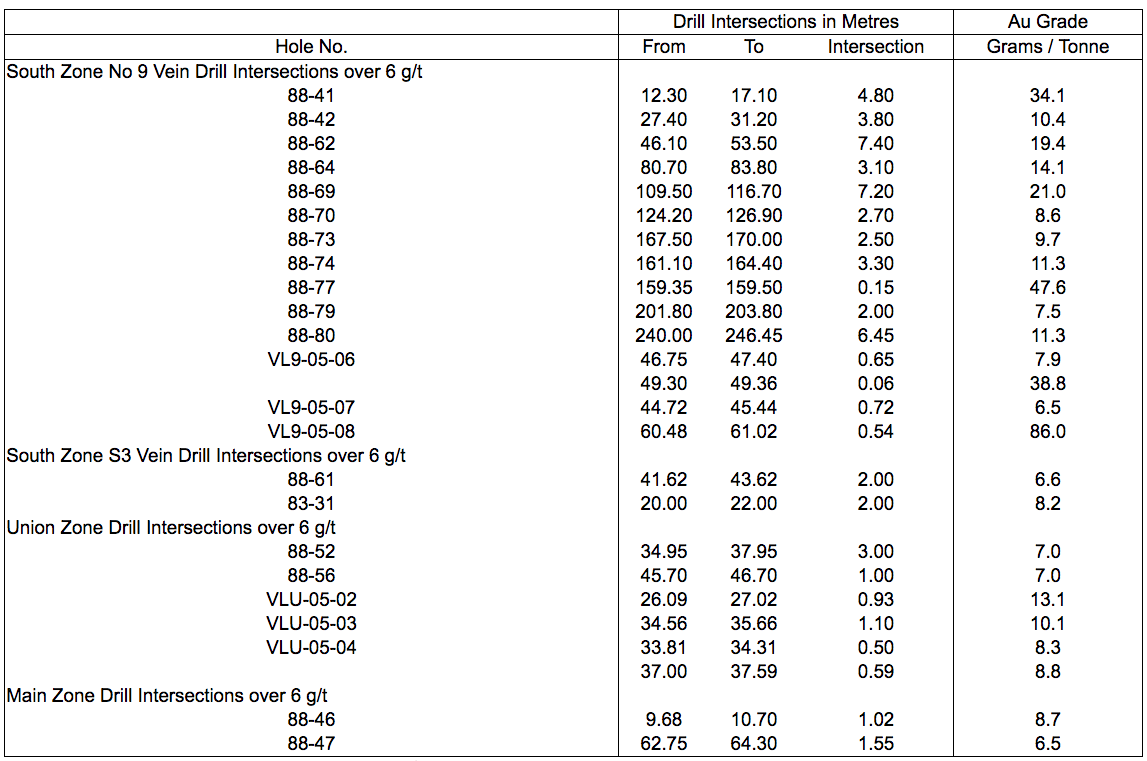 These calculations are taken from Balog (1989), but not confirmed. All resource estimates are calculated using longitudinal sections of the veins and a polygonal block method. Polygons have included all material to the midpoint between adjacent holes. Polygons occurring on the edge of the longitudinal and having no adjacent holes were extrapolated a maximum of 15 meters. Estimates have been established for the W1 Vein and the #9 Vein in 1988 (Balog, 1989) and were completed using a 4.0 g/t gold cut-off over a minimum width of 1.5 meters (true width) and a specific gravity of 2.7 tonnes per cubic meter. The qualified person has not done sufficient work to classify the historical estimate as a current mineral resource therefore ExGen is not treating these historical estimates as current mineral resources.

To date, seven auriferous quartz veins have been identified on the property and occur over a strike length of one kilometer within a regional scale geophysical anomaly. The gold mineralization occurs as coarse gold particles.

ExGen Resources’ partner Blue Lagoon has planned an exploration program consisting of project-level compilation, GIS update and assessment including a 2020 Phase One drill program to begin in late January 2020.

*Disclaimer: The profile provides information which was sourced and approved by ExGen Resources in order to help investors learn more about the company. ExGen Resources is a client of the Investing News Network (INN). The company’s campaign fees pay for INN to create and update this profile page, to which links are placed on Investingnews.com and channel newsletters.
The company description, investment highlights and catalysts were sourced by INN and approved by the company. INN does not guarantee the accuracy or thoroughness of the information contained on this page.

INN does not endorse or recommend the business, products, services or securities of any company profiled.
Readers should conduct their own research for all information publicly available concerning the company.