This Equity Metals profile is part of a paid investor education campaign.*

Equity Metals Corporation (TSXV:EQTY) is a precious metals company bringing modern exploration techniques to its flagship Silver Queen gold–silver property, which is 100-percent owned by the company and royalty-free. The company’s Silver Queen project is located within the well-mineralized Skeena Arch region of the Stikine Terrane, a major metallogenic belt running through British Columbia associated with gold-rich deposits that helped give rise to the Omineca Mining Division.

The Silver Queen property has seen more than 100 years of historic exploration and development since 1912, including intermittent mining and over 500 historic drill holes with more than 9,000 meters of underground workings. The property is located in the well-established Omineca Mining Division, which hosts significant mining infrastructure developed by previous operators. The property is located in the heart of the district and has nearby access to electricity, roads, railways, and skilled labor from the town of Houston. 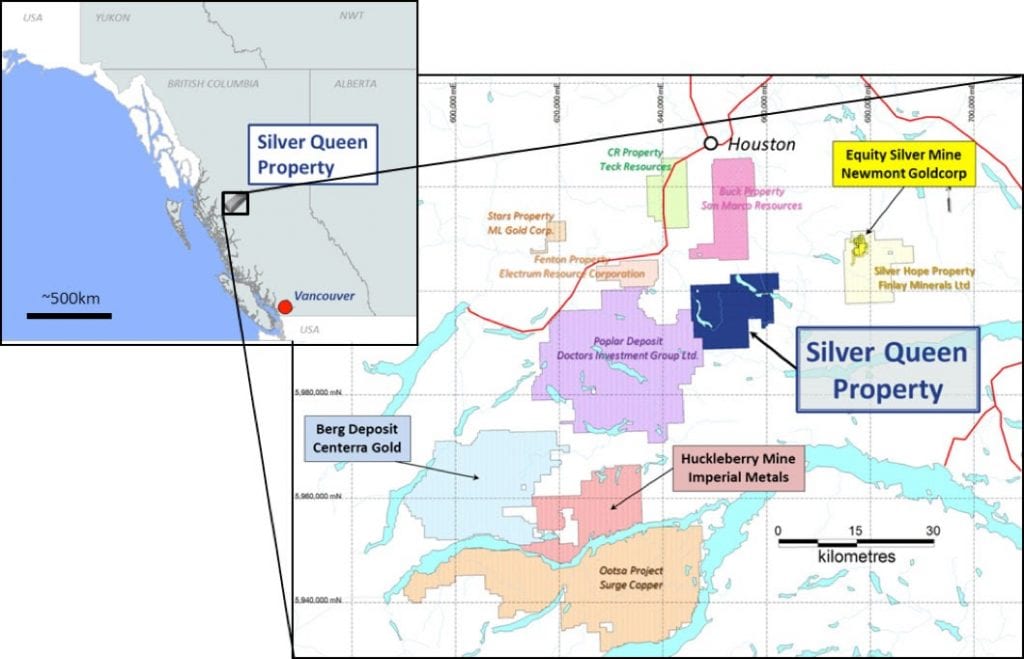 The rich mineralization and existing infrastructure in the area have attracted a number of major mining companies to the Omineca Mining Division including Teck Resources Limited (TSX: TECK.A, NYSE: TECK), Imperial Metals (TSX:III), Centerra Gold (TSX:CG) and Newmont Goldcorp (TSX:NGT, NYSE:NEM). At nearly 19,000 hectares, Equity Metals’ Silver Queen project is one of the larger land packages in the region, hosting a 2019 NI 43-101 resource estimate in the Indicated category of 85,000 ounces of gold, 5.2 million ounces of silver, 5 million pounds of copper, 17 million pounds of lead and 114 million pounds of zinc, and a slightly lesser amount in the Inferred category.

Equity Metals has identified more than 20 epithermal gold veins on the Silver Queen property. Three of these veins are targeted for exploration drilling with the goal of doubling the current mineral resource. The first phase of 10 holes was recently completed, and initial assays should begin to be received early in October, with additional assays received over subsequent months due to lab delays resulting from Covid-19 restrictions. A second phase of drilling is now being planned and is expected to begin in Q4. The company has already secured a five year exploration permit that includes 50 drill sites and 6 kilometers of additional exploration trials. Silver Queen is expected to provide year-round road access and will be evaluated for the potential of an underground mine.

Equity Metals is also working to develop the Monument Diamond Project and the WO Project, although at a much slower pace to maintain focus on the Silver Queen asset. The Monument Project is located in the Lac de Gras district, which is 300 kilometers north of Yellowknife and has been developed by DHK Diamonds Inc. and Kennecott Canada Exploration Inc. Equity Metals acquired the property in 2004 and has since discovered eight diamond-bearing kimberlites. The WO Project is located near the Monument property and contains an Indicated National Instrument 43-101 resource of 19.5 Mt at a grade of 0.94 c/t for a total of 18.2 million carats of diamonds.

Dr. Alan Wainwright, an experienced geologist and an expert in porphyry and vein mineralization, officially joined Equity Metals as a consultant in April 2020. He is expected to aid in exploration designed to “better understand controls of mineralization via detailed alteration studies and additional mapping,” at Silver Queen. The company intends to leverage the findings from his studies to refine additional high-grade targets.

Equity Metals owns 100 percent interest in the Silver Queen project with no underlying royalties. The company’s board of directors and management team bring decades of mining exploration, discovery, and development experience to the table, including many significant North American projects. The company also benefits from significant support provided by the Manex Resource Group, where Vice President Robert W.J. Macdonald operates as the Vice President of Geological Services.

The Silver Queen project covers nearly 19,000 hectares of the Omineca Mining Division south of Houston, British Columbia. The property is located in the heart of the Skeena Arch and is surrounded by current and historical mines and advanced exploration projects. Mineralization was discovered in 1912—since then, over 500 drill holes have been established and more than CA$20 million has been spent on the property.

While the property has seen extensive exploration, previous programs have largely focused on either large-scale grassroots discovery drilling or small-scale resource expansion. Equity Metals plans to develop the historical resource by systematically prioritizing property-wide targets and quickly expanding on the initial National Instrument 43-101 Mineral Resource Estimate on the property. 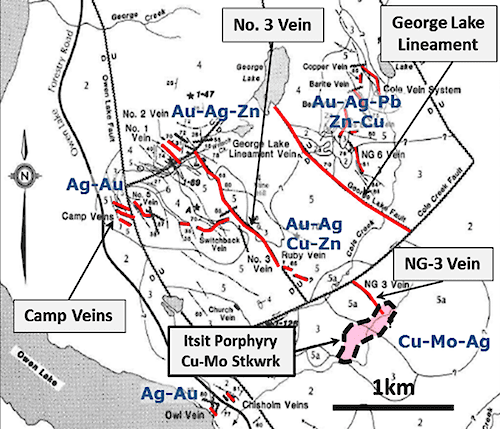 Equity Metals is currently navigating a three-stage exploration program. Phase I was completed in early 2020 and involved data compilation and interpretation. The second phase of the exploration program involved a drill campaign to test three initial targets in the vein system and perform surface exploration to identify future targets. The first 10 holes of the second phase have been completed. This portion of the program verified certain historic mineralized zones and surrounding alteration halos that were not assayed, as well as testing footwall and hanging wall veins. Phase III is expected to begin in the third quarter of 2020 and will involve follow-up drilling to infill or extend specific targets with the objective of finalizing a National Instrument 43-101 Mineral Resource Update.

The Monument Diamond Project is located on the south shore of Lac de Gras, Northwest Territories, within 40 kilometers of both the Ekati Diamond Mine and Diavik Diamond Mines Ltd., both of which contribute significantly to the world’s diamond production.

The Monument has 12 known kimberlites. The recent development of land-based targets has resulted in the discovery of several new kimberlites on the property. A 2007 drill sample of one of these diamond-bearing kimberlite produced 955 diamonds, including the largest diamond found to date from the Monument property, weighing 0.445 carats.

In 2019, Equity Metals updated its five-year Land Use Permit, allowing for continued exploration of the Monument Project. The company is now planning its next steps, which will include a systematic exploration program to test various targets and acquire further kimberlite for diamond content and analyses.

The WO project is also located in the Lac de Gras area and is located southeast of the Diavik Diamond mines. The property encompasses over 5,800 hectares and is readily accessible from Yellowknife via fixed-wing aircraft. From mid-January to mid-April, the property is accessible through a designated road which connects Yellowknife with the Ekati and Diavik Diamond Mines.

Mr. Kizis is a Registered Geologist and a Certified Professional Geologist with a B.S. in Geology from Kent State University and an M.S. in Geology from the University of Colorado. He has 40 years of experience in exploration for gold, silver, copper, molybdenum, lead, zinc, and uranium in the U.S., Canada, and abroad. He is the President and a director of Bravada Gold Corporation and Equity Metals Corporation and previously of Homestake Resource Corporation as well as Fortune River Resource Corp. (which amalgamated with Bravada Gold Corporation in 2011). Mr. Kizis has held previous executive positions and directorships with Fairmile GoldTech, Sierra Geothermal, the Geological Society of Nevada, and the GSN Foundation.

Lawrence Page obtained his law degree from the University of British Columbia in 1964 and was called to the Bar of British Columbia in 1965 where he has practiced in the areas of natural resource law and corporate and securities law to the present date. Through his experience with natural resource companies and, in particular, precious metals development, Mr. Page has established a unique relationship with financiers, geologists, and consultants and has been counsel for public companies that have discovered and developed producing mines in North America. Specifically, he has been a Director and Officer of Companies that have discovered and brought into production the David Bell and Page Williams mines in Ontario, the Snip, Calpine/Eskay Creek, and Mascot Gold Mines in British Columbia, as well as the discovery of the Penasquito Mine in Mexico.

Mr. Ruby is the President & CEO of Malaspina Consultants Inc. in Vancouver and focuses on clients in the resource and junior public sector. Mr. Ruby advises clients on matters related to financial management and public company reporting and is particularly adept at handling complex issues and multiple stakeholders with a collaborative, team-based approach. Prior to joining Malaspina, Mr. Ruby was an Assurance Partner at Wolrige Mahon LLP (now Baker Tilly Canada) working predominantly with resource and other junior public companies, and formerly was a Senior Manager with KPMG LLP working on a range of public companies and reporting issuers. He holds a BSc. (Accounting) from University College Cork, Ireland, a Post-Graduate Diploma in Corporate Treasury from Dublin City University, Ireland, and received his Chartered Accountant designations from Canada and Ireland in 2010 and 2002, respectively.

Mr. Shearer has been an entrepreneur all his working career. After working in the BC timber industry and in a junior silver producer in the Canadian Arctic, he co-founded and ran a private oilfield service company in Alberta for a decade and successfully sold it to a large, multi-national corporation. He was involved in several junior Canadian exploration and production companies for 15-years as a board member and in the C-suite, including being CFO for Merit Mining Corp. when they opened the Greenwood Gold Project in 2008. He was also a director and consultant for San Gold Corporation when they opened the Rice Lake, Manitoba gold mine, and grew from a market capitalization of $18 million to over $1.1 billion in 6 years. He worked on the business development team that raised over $120 million to finance that growth and conversion from the TSX Venture Exchange to the TSX.

Mr. Kerr graduated from the University of British Columbia in 1964 with a BASc degree in Geological Engineering. He has participated continuously in the mining industry since graduation as an exploration geologist, representing Canadian Johns-Manville Co. Ltd. in all areas of Canada during his early career in the 1960s. During the 1970s and early 1980s, he initiated a consulting business out of Kamloops, British Columbia, participating in exploration programs in all areas of North America, moving to Vancouver in 1984 to assume the role of managing director of several junior mining companies. As a consultant, John specialized in supervising remote projects in the High Arctic regions of northern Canada and Greenland.

Dr. Wainwright is an economic geologist with mineral exploration and research experience in North America, South America, Europe, and Asia, with a focus on base metals and gold. His expertise includes copper and gold exploration, regional metallogeny, and volcanic arc geology, with over a decade of combined experience working as a consultant and geologist at the Kaminak Gold Corporation, Venture One Capital Corp., the Mineral Deposit Research Unit, and Vector Geological Solutions.

The information contained here is for information purposes only and is not to be construed as an offer or solicitation for the sale or purchase of securities. Readers should conduct their own research for all information publicly available concerning the company. Prior to making any investment decision, it is recommended that readers consult directly with Equity Metals and seek advice from a qualified investment advisor.