This Blue Moon Mining profile is part of a paid investor education campaign.*

Much of zinc production comes from Asia and South America, with China and Peru being the top two producers. However, North American mining companies with a strong grasp on these trending markets present investors with opportunities for highly-prospective zinc discovery in the West and the chance to invest in the metals that will power the future.

Patrick McGrath, CEO of Blue Moon Mining (TSXV:MOON,OTC Pink:BMOOF) saw the immense potential of the Blue Moon asset and accumulated shares through the market to eventually take over the company and control of the project. McGrath is a CPA-CGA with over 20 years of experience in financing and executive roles in the junior public sector. It is worthy to note that McGrath was the CFO OF Anatolia Energy which raised $37 million and was acquired by Cub Energy in 2013.

Also part of the Blue Moon Mining team is director Jack McClintock whose long list of accomplishments include holding the position of Exploration Manager with BHP Billiton (NYSE:BHP) as well as being credited for the discovery of Rio Algom’s Spence porphyry copper deposit in Chile. He was awarded “Prospector of the Year” by PDAC in 1998.

Blue Moon Mining’s flagship project is its 100 percent owned advanced stage Blue Moon zinc-silver project in California, USA. Blue Moon was a past producing silver-zinc mine under Hecla and has since then been owned by majors such as Boliden, Imperial Metals and even Barrick. It also holds the Yava project in Yukon, which shares known metal occurrences between uppermost felsic volcanic rocks of the greenstone belt overlying sedimentary rocks at the Hackett River occurrence and the Musk.

Blue Moon Mining expects big things in 2021, including an extensive drilling campaign towards the end of the year. “We think we’ve identified some really exciting opportunities where we think we could potentially double or triple this resource, which is huge,” McGrath commented.

The flagship Blue Moon project is located in east-central California within the foothills of  Mariposa County. The property is accessible by gravel roads off a nearby paved highway amongst other access points. Blue Moon Mining owns 100 percent of the project.

The prolific mining district has extensive exploration history as there are still active mines in the region that date back to the original California gold rush. NI-43-101 mineral resources estimates put inferred mineralization at approximately 7.8 million tons with a grade of 8.07 percent zinc equivalent or approximately 771 million pounds of zinc, 71 million pounds of copper, 300,000 ounces of gold and 10 million ounces of silver. 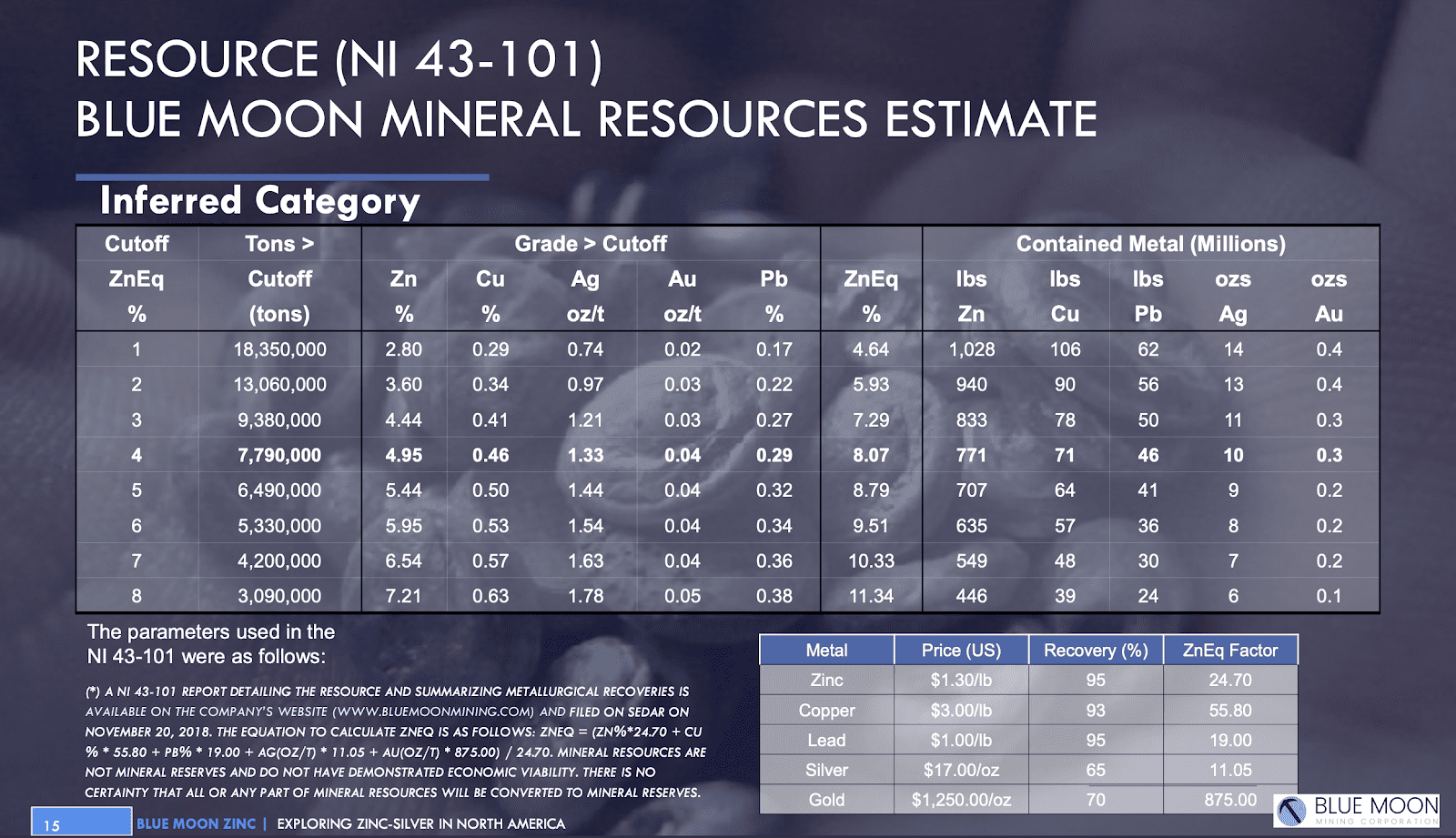 Recent remodeling of the deposit using digitized data revealed that the deposit is open to depth with extension potential southward. The company has identified possible new lenses that it intends to drill, hence the opportunity to make this project much larger in the short term. The property presents Blue Moon Mining with the exciting possibility to expand the highly-favorable current resources in future development and drilling programs to feasibility and permitting. 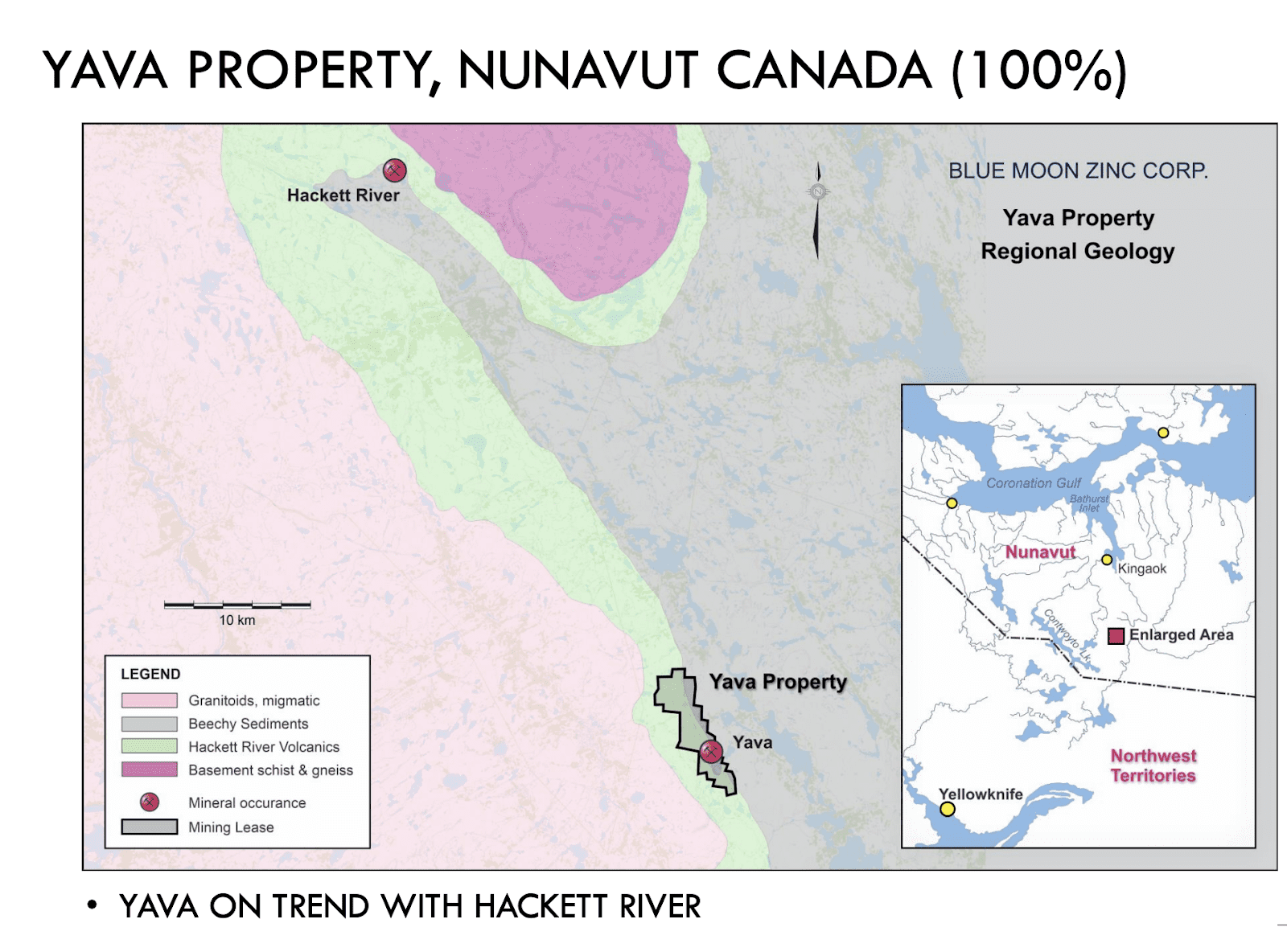 The next steps for the project include exploring the five shallow holes the company recently completed drilling on. Blue Moon Mining intends to advance development and drilling for this enormous system asset.

Patrick McGrath is a CPA, CGA with over 20 years of experience as a senior executive of junior resource companies, including being a founder and former VP of Finance of Adriana Resources Inc. (Sprott Resource Holdings Inc.), a development company focused on iron ore. He assisted in raising US$50 million in debt and equity and has led corporate reorganizations, mergers and acquisitions, capital raises and joint ventures.

McGrath has a Bachelor of Commerce degree from Memorial University.

Varun Prasad is a CPA, CGA and had senior roles with development stage mining companies listed on the TSX Venture Exchange and is well versed in the continuous disclosure requirements. Prasad is the CFO of Western Copper and Gold and has a Bachelor of Technology in Accounting from the British Columbia Institute of Technology.

Jack McClintock is a professional engineer and is the VP of Exploration of Northisle Copper and Gold Inc. McClintock was a former exploration manager with BHP Billiton and had a successful track record leading and participating in several mineral discoveries and acquisitions. This portfolio includes Rio Algom’s discovery of the Spence porphyry copper deposit in Chile, for which he was awarded the “Prospector of the Year” award by the Prospectors and Developers Association of Canada in 1998 and the acquisition of the Antamina deposit in Peru.

Jonathan Gagné is currently a senior consulting engineer working for Greenstone Gold Mines, aiming to develop the multi-million-ounce Hardrock Gold Project located in Ontario. Gagné began his career with Agnico-Eagle during the construction and commissioning of the Meadowbank gold project located in Nunavut. He then led the mining engineering department for SGS Geostat, a mining services company specializing in computer-assisted mineral resource estimation services. Mr. Gagné then followed with Glencore Zinc, where he was involved in numerous zinc projects throughout the World.

Gagné has a B.Sc. in Mining Engineering from Polytechnique Montreal and an MBA with a specialization in Corporate Finance from Université du Québec à Montréal.

The information contained here is for information purposes only and is not to be construed as an offer or solicitation for the sale or purchase of securities. Readers should conduct their own research for all information publicly available concerning the company. Prior to making any investment decision, it is recommended that readers consult directly with Blue Moon Zinc Corp and seek advice from a qualified investment advisor.