Star Diamond Corporation (“Star Diamond” or the “Corporation”) today announced that a total of 3,534 diamonds weighing 210.68 carats have been recovered to date from the ninth (19FALCT007) bulk sample trench excavated on the Star Kimberlite by Rio Tinto Exploration Canada Inc. (“Rio Tinto Canada”) in 2019. 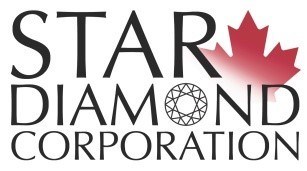 “We are pleased by the recovery of the three larger 10.13, 8.10 and 7.29 Type IIa diamonds from Rio Tinto Canada’s ninth trench. The recent recovery of larger Type IIa diamonds from Rio Tinto Canada’s bulk sample program continues to strengthen our expectation for recovery of large, high value diamonds in a future producing diamond mine,” said Ken MacNeill , President and CEO of Star Diamond .  “There were also 5.15 and 3.44 carat diamonds recovered from the ninth trench, with the 3.44 carat diamond being an “H” (near colourless) octahedron.”

Mr. MacNeill continued, “The initial results from the first nine reported trenches continue to validate the grades outlined in our Preliminary Economic Analysis that was based upon Star Diamond’s own prior underground bulk sampling and large diameter drilling programs.”

The breakdown of the kimberlite intercepted and diamonds recovered to date from trench 19FALCT007 is detailed in the table below.

Diamond results reported in this news release are based on diamond recovery processing conducted by the Saskatchewan Research Council through Geoanalytical Laboratories Diamond Services located in Saskatoon Saskatchewan (the “SRC”).  Primary recovery processing consisted of X-ray transmission (XRT) sorting, X-ray luminescence (XRL), magnetic separation and grease table recovery methods.  The SRC is an independent mineral processing facility which is accredited to the ISO/IEC 17025:2017 standard by the Standards Council of Canada as a testing laboratory for specific tests.

Star Diamond Corporation is a Canadian based corporation engaged in the acquisition, exploration and development of mineral properties. Shares of the Corporation trade on the Toronto Stock Exchange under the trading symbol “DIAM”. The Corporation’s Fort à la Corne kimberlites (including the Star – Orion South Diamond Project) are located in central Saskatchewan in close proximity to established infrastructure, including paved highways and the electrical power grid, which provide significant advantages for future mine development. During 2018, the Corporation announced the positive results of an independent Preliminary Economic Analysis (the “PEA”) on the Project. The PEA estimated that 66 million carats of diamonds could be recovered in a surface mine over a 38-year Project life, with a Net Present Value (“NPV”) (7%) of $2.0 billion after tax, an Internal Rate of Return (“IRR”) of 19% and an after-tax payback period of 3.4 years after the commencement of diamond production (see news release dated April 16, 2018).

These forward-looking statements are based on the Corporation’s current beliefs as well as assumptions made by and information currently available to it and involve inherent risks and uncertainties, both general and specific. Risks exist that forward-looking statements will not be achieved due to a number of factors including, but not limited to, developments in world diamond markets, changes in diamond valuations, risks relating to fluctuations in the Canadian dollar and other currencies relative to the US dollar, changes in exploration, development or mining plans due to exploration results and changing budget priorities of Rio Tinto Canada or the Corporation, the effects of competition in the markets in which the Corporation operates, risks related to the legal proceedings commenced by the Corporation against Rio Tinto Canada, the impact of the COVID-19 pandemic, risks related to the operation of the on-site Bulk Sample Plant and the processing methods being used by Rio Tinto Canada and the effectiveness thereof, risks related to diamond breakage and cost overruns and other consequences arising from Rio Tinto Canada’s extraction and diamond recovery methodologies, risks related to the Corporation’s need for additional financing and the Corporation’s ability to raise that financing, the impact of changes in the laws and regulations regulating mining exploration and development, judicial or regulatory judgments and legal proceedings, operational and infrastructure risks and the additional risks described in the Corporation’s most recently filed Annual Information Form, annual and interim MD&A, news releases and technical reports. The Corporation’s anticipation of and success in managing the foregoing risks could cause actual results to differ materially from what is anticipated in such forward-looking statements.