Hemerdon is the only sizeable tungsten project under construction in the world today; most other significant projects are at least 1.5 to 2 years away from commercial production. The Hemerdon Project is expected to be a low-cost, large-scale open-pit mining operation with first production slated for mid-2015. In 2016, production at Hemerdon will account for 3.5% of projected world demand.

Wolf Minerals is managed by an experienced team of British and Australian mining professionals with an excellent track-record of development and operational success.

The Hemerdon Tungsten Project is located 10 km northeast of Plymouth, in Devon, England. The project site has access to existing infrastructure and is located near existing open pit clay mining operations. Wolf Minerals acquired the property in 2007 with a pre-existing planning approval valid until 2021. The Company is applying to extend the approval.

An extensive tungsten and tin deposit was first discovered at Hemerdon in the 1860’s. The Property was first developed in 1914 when demand for weaponry during World War I drove tungsten demand much higher. Commercial production continued sporadically until the mine’s closure in 1945. Total production from Hemerdon during the war period was limited and represents about one month’s production from the new operation.

In May 2011, Wolf Minerals completed a Definitive Feasibility Study on the Hemerdon project, the results of which indicated robust economics based on a 3Mtpa operation over a 9.25 year life of mine. Production is estimated at approximately 350,000 tonnes per annum (tpa) of a wolframite tungsten concentrate with a grade of 65% WO3 along with approximately 460 tpa tin concentrate. The Hemerdon project has an estimated CAPEX of £130 million.

In December 2013, Wolf Minerals was granted its Waste Facility Environmental Permit, the final major permit required in the development of the project. Construction began in February 2014.

In March 2015, Wolf Minerals announced it had increased the Ore Reserves by 34% over the previous Ore Reserve reported in the 2011 Definitive Feasibility Study.

The new estimate is based on the positive results of a six-hole geotechnical program, targeting the perimeter of the open pit, completed in Q4 2014. The work resulted in a new pit design that steepens the pit walls and results in the pit being 65 metres deeper, leading to the increase in reserves that equate to a three year increase in mine life.

There is still tremendous upside to the resource and reserve potential at Hemerdon. Drilling indicates that mineralization is open at depth to more than 400 metres below surface and there is also mineralization open along strike. 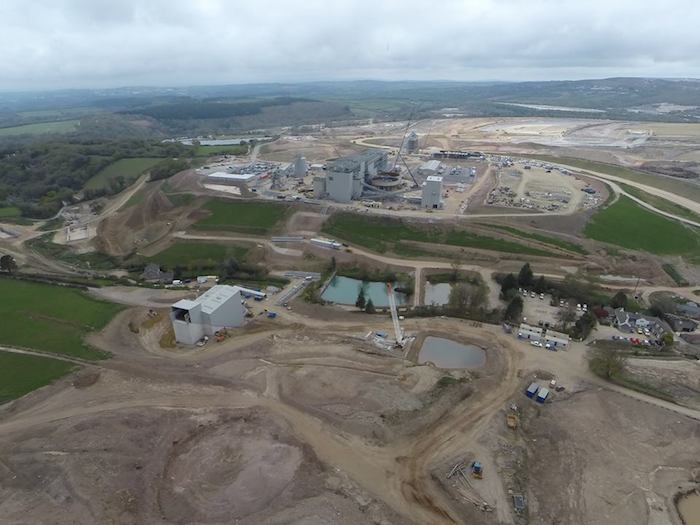 Hemerdon ore will be processed using a simple gravity circuit. Operations at Hemerdon will also include an SGS Laboratory for testing both grade control samples and processing plant samples. Installation is underway and assaying will begin in June 2015.

Mine optimization and equipment installation is underway and the project remains on schedule for production in mid 2015. Wolf Minerals expects to begin introducing ore into the plant in June 2015.

Wolf Minerals has secured strategic off-take agreements with two of the world’s largest end users: Global Tungsten & Powders; and Wolfram Bergbau and Hutten. The agreements are for a fixed-term of 5 years and a fixed volume that totals 80% of tungsten concentrate production at Hemerdon, at a floating price.