This profile is part of an investor education campaign. The profile provides detailed information which was sourced and approved by Westhaven Ventures Inc. in order to help investors make better investment decisions. The Company’s support of Investing News Network ensures we can continue to bring you unbiased, independent news and information.

Westhaven Ventures (TSXV:WHN) is putting the pieces together for what it hopes will be the next major gold district in British Columbia, based upon an exciting geological trend known as the Spences Bridge Gold Belt (SBGB).

The discovery of placer gold at the confluence of the Nicoamen and Thompson Rivers in 1857 sparked the Fraser River Gold Rush that a year later saw 20,000 gold miners panning the streams of southern British Columbia. While gold panning made some of those early miners rich, the source of the gold was never found. It is this tantalizing goal that is driving Westhaven to develop the 110-kilometer-long SBGB, enabling the company and shareholder value to grow in lockstep.

Led by Grenville Thomas, a Canadian Mining Hall of Famer who is best known for discovering the Diavik diamond mine, Westhaven Ventures has consolidated three properties – Prospect Valley, Shovelnose and Skoonka Creek – which together cover over 330 square kilometers. The relatively unexplored volcanic rocks are considered to be highly prospective for epithermal gold mineralization.

Westhaven Ventures is working on a plan to drill all three properties, with a view to assembling a collection of drill results that will identify the source of the Fraser River Gold Rush that could eventually become the next B.C. gold mine.

“We think this area has been very much overlooked as a potential gold belt and for us we see a lot of prospectivity in it,” says Shaun Pollard, CFO and director. “We’re hoping that at least one of the properties is responsible for the gold that was panned out of these rivers.”

Along with good geology and a management team with deep experience (including the geologist who discovered the Spences Bridge Gold Belt), Westhaven is also exploring in an area with excellent infrastructure. The properties are close to the Coquihalla Highway – a major east-west thoroughfare – rail and power infrastructure, and within close proximity to three major producing mines: Highland Valley Copper, Copper Mountain and the New Afton Mine.

“The access to infrastructure allows us to conduct very low cost exploration. Also, should we make a discovery it lowers the bar with respect to the capital expenditure requirements which could lead to increased project valuations down the line,” said Pollard. 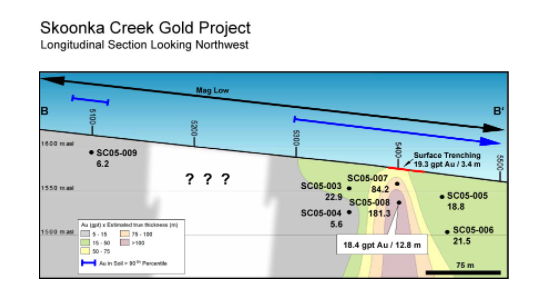 Located near the northern end of the SBGB, Westhavenrecently acquired the property from Strongbow Exploration and Almadex Minerals. While exploration on Skoonka Creek began 17 years ago, there has been a limited amount of drilling done. The best hole to date was drilled by Strongbow in 2005, which yielded 20.2 g/t gold over 12.8 meters.

“With the addition of the Skoonka Creek gold property, Westhaven has 100 percent of what are arguably the three best properties on the SBGB,” said Pollard. He noted the company has identified multiple drill targets at Skoonka Creek and will start exploration once permits are in place. 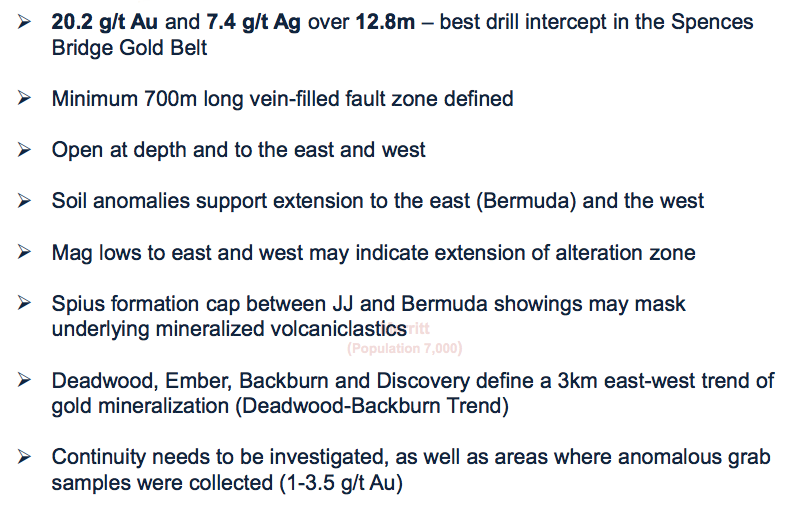 The Shovelnose property, located about 30 kilometers from Merritt on the southern end of the Spences Bridge Gold Belt, was the first property acquired by Westhaven Ventures. According to the company, there are widespread gold occurrences on the 19,012-hectare property, evidenced by quartz veins grading up to 66 grams per tonne (g/t) gold and float samples grading 119 g/t gold and 273 g/t silver.

Westhaven began drilling Shovelnose in 2011 with a modest seven-hole program under 700 meters, and has been adding holes every year since; so far, 40 holes have been drilled for a total of 6,371 meters in four target areas.

“With each successive drill program at Shovelnose we continue to find better gold grades locally within greater thicknesses of gold mineralized sections,” said Pollard. “We have outlined a large mineralized system that remains open in all directions including potential for higher grade mineralization.”

2017 plans for Shovelnose include testing for a potentially higher-grade zone at depth by conducting a geophysical survey and follow-up drilling. 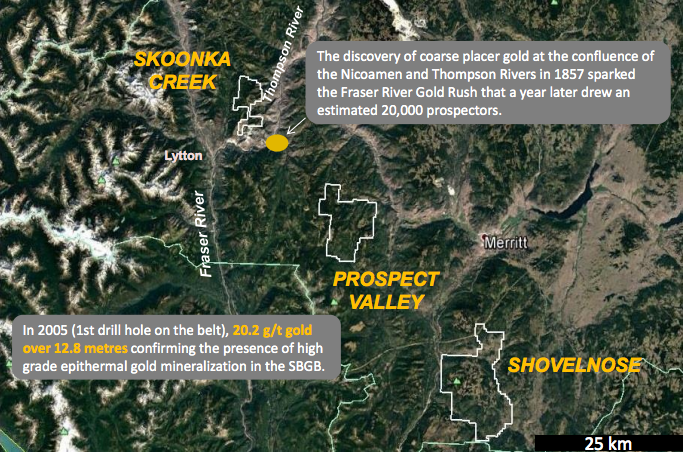 The Prospect Valley property was first staked in 2001, and explored by Westhaven technical advisor Ed Balon, who was interested in stream samples done by government surveys. Balon is widely recognized for discovering the Spences Bridge Gold Belt. Since 2001, exploration at Prospect Valley has included soil sampling, helicopter and ground geophysics, 1,641 meters of trenching, and 57 holes of diamond drilling totalling 8,818 meters.

In 2012 the previous property owner, Berkwood Resources, completed a National Instrument 43-101-compliant resource estimate focused on the Discovery Zone. Data from 45 of 57 drill holes produced an estimated 166,000 ounces graded 0.51 g/t. 10.07 million tonnes are above a cutoff grade of 0.3 g/t gold.

Westhaven Ventures acquired Prospect Valley in 2016 for $140,000 plus a million shares—pennies on the dollar compared to the roughly $7 million that had been spent exploring the property. The company is planning a large drill program aimed at improving the resource estimate on the property.

A 50-year mining industry veteran, Grenville Thomas is credited with two significant discoveries: the Diavik diamond mine, and the Thor Lake rare earths deposit, both in the Canadian Northwest Territories. Thomas was also the founder of Toronto-based Aber Resources Ltd. (now Dominion Diamond), and he is currently the chairman of North Arrow Minerals, Strongbow Exploration and Helio Resources. He won the PDAC Prospector of the Year Award for 1999. In January 2009, Thomas was inducted into the Canadian Mining Hall of Fame.

Victor Tanaka has over 40 years’ experience as a geologist and exploration manager with junior and senior companies, during which he participated in several mineral discoveries in Canada’s Arctic and Saskatchewan. He has held senior positions with Freeport McMoran, Aber Resources, Asamera, Cominco, Canarc Resources and Fjordland Exploration. Tanaka is currently chief operating officer of Bayswater Uranium and he is also a director of Fjordland Exploration, Impact Minerals and Serengeti Resources.

Shaun Pollard is a founding partner at Meridian Capital International Ltd, a mining focused advisory firm, where he is responsible for providing corporate finance and marketing solutions to both public and privately held resource companies. He has assisted explorers and producers in raising capital and awareness through an established, international network of accredited investors. Pollard is also the chief investing officer for Meridian’s investment vehicle which actively invests in commodity and index derivatives and accomplished public companies.

Gareth Thomas has been involved in the mining industry for over 12 years and has extensive exploration experience and market knowledge. Prior to Westhaven he worked with various public companies in corporate development overseeing business development, investor relations and project acquisitions. Thomas is also the managing director of Anglo Celtic Exploration Ltd., a private venture capital company, and he is the co-founder of Westhaven Ventures.

Throughout his career, Ed Balon has co-discovered several important deposits. Some of these include Gayna River zinc-lead in the Northwest Territories; Logan zinc-silver-tin in the Yukon Territory; Midway (Silvertip) silver-lead-zinc in northern British Columbia; and the Elk/Siwash high-grade gold veins in southern British Columbia. He is widely recognized for identifying the Spences Bridge epithermal gold belt in southern British Columbia. In 2014 Balon was inducted into the Yukon Prospectors’ Association Hall of Fame in recognition of significant discoveries made during the 1970’s. This includes leading the team that discovered the Logan Deposit (13.08 million tonnes at 5.1 percent zinc and 23.7 grams per tonne silver) northwest of Watson Lake in 1979.

The information contained here is for information purposes only and is not to be construed as an offer or solicitation for the sale or purchase of securities. Readers should conduct their own research for all information publicly available concerning the company. Prior to making any investment decision, it is recommended that readers consult directly with Westhaven Ventures Inc. and seek advice from a qualified investment advisor.