This Prosper Gold profile is part of a paid investor education campaign.*

Prosper Gold (TSXV:PGX) is a Canadian mineral exploration company leveraging its experience and past successes to find the next world-class high grade gold deposit in the Red Lake Mining District, Ontario, Canada. Prosper Gold management includes Peter Bernier and Dirk Templeman-Kluit, founders of Richfield Ventures Ltd. who were responsible for the discovery and subsequent sale of the multi-million-ounce Blackwater Gold deposit in British Columbia. In 2011, New Gold (TSX:NGD,AMEX:NGD) acquired Richfield Ventures for an estimated C$550 million. An updated resource estimate released in 2020 found a total of 8 million contained ounces of gold Blackwater property (proven and probable).

Through a combination of option (Sabina Gold & Silver Corp.), purchase agreements and staking activities, Prosper Gold has consolidated a land package totaling approximately 16,400 hectares in the world-renowned Red Lake Gold Mining District. The aptly named Golden Sidewalk property has numerous high-grade gold drill intercepts and several locations on the property where one can walk over visible gold at surface. Significant results achieved by Sabina Gold & Silver Corp. include 1.7 meters grading 46.0 g/t gold in 2008 drilling and surface rock samples that ran as high as 3,742.55 g/t gold. The project has seen no work since 2009.

The Red Lake district has produced almost 30 million ounces of gold from several world-class mines, including the historic Campbell and Red Lake mines, both of which produced gold for many years at ore grades of 0.57 oz/t gold on average. The Red Lake and Birch-Uchi greenstone belts both lie within the East Uchi Subprovince of Northwestern Ontario. Regional interest in the Birch-Uchi greenstone belt has been renewed by successful ventures such as the Dixie Gold project, where a significant discovery has been made by Great Bear Resources (TSXV:GBR), as well as the 4.9 million ounce Springpole project held by First Mining Gold (TSXV:FF). Geological similarities between the Golden Sidewalk property and other prosperous projects in the area highlight the expansion potential of the Birch-Uchi greenstone belt. 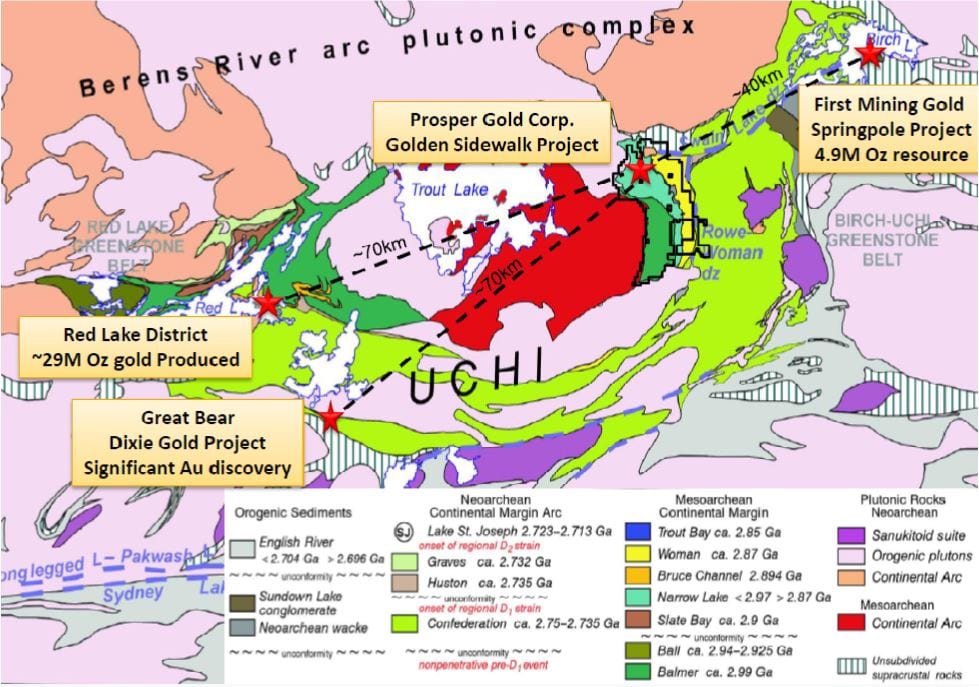 Gold mineralization found in the Red Lake area is typically associated with the presence of quartz-ankerite veins and breccias hosted by silica-biotite altered mafic to ultramafic volcanic rocks in proximity to major structural breaks. Prosper Gold’s land package includes all these characteristics. “We are excited to begin work in the Red Lake district,” said Peter Bernier, President and Chief Executive Officer of Prosper Gold Corporation. “The Golden Sidewalk and Skinner gold properties offer a favorable geological setting, with anomalous gold mineralization being encountered in till samples, outcrops, trenches and historical drill holes. The area contains all the correct attributes for economic gold deposits in the Red Lake district.”

Prosper Gold recently appointed Douglas Cater as its technical advisor for the company’s Ontario gold projects. Cater is a professional geologist with over three decades of experience in the exploration and mining of precious metals. He has previously acted as the Vice President of Exploration for Kirkland Lake Gold (TSX:KL) and St. Andrew Goldfields. The management team at Prosper believes Cater’s prolific track record of exploration discovery and resource expansion will be instrumental on the ground in Ontario.

The Golden Sidewalk exhibits several distinct geological characteristics that suggest the potential for a high-grade gold system, including quartz-ankerite veins and breccias hosted by mafic to ultramafic volcanic rocks in proximity to a regional unconformity. Of the 28 million ounces historically produced in the Red Lake greenstone belt, 94 percent are in close proximity to a regional unconformity.

A number of high-grade samples have been identified within the boundaries of the Golden Sidewalk project, including: 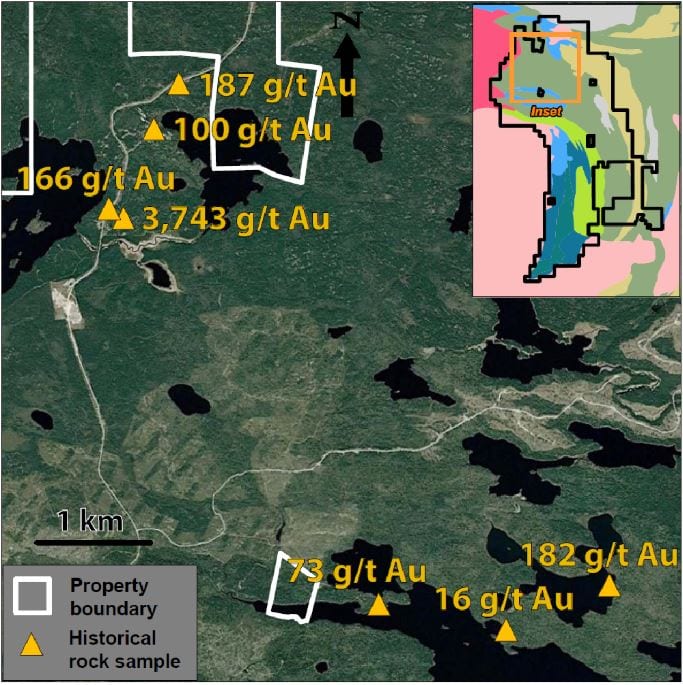 Prosper Gold has raised $3 million in a recent equity financing to fund exploration on the Golden Sidewalk property. The company has conducted initial till sampling on the property with results pending and has also commissioned an extensive airborne magnetic-electromagnetic survey to improve its geological understanding of the district-scale property. The geochemical and geophysical datasets will assist in target definition for diamond drill testing in 2021. 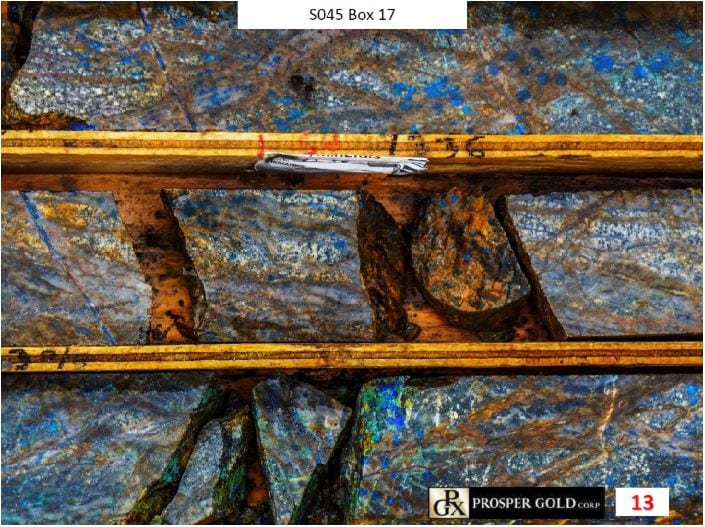 Prosper Gold owns a 51 percent controlling interest in the Star project in a joint venture with OTSO Gold Corp. The Star project is bordered by several resource projects in the surrounding area.

Peter Bernier—President, CEO and Board Chairman

Mr. Peter Bernier has more than 35 years of experience in mineral exploration and project management. Most notably, Mr. Bernier jointly received the 2011 H.H. “Spud” Huestis Award from the Association of Mineral Exploration of British Columbia for Excellence in Prospecting and Mineral Exploration. As the Founder, President and CEO of Richfield Ventures Corp., Mr. Bernier was responsible for building and managing the Richfield team. Under his leadership, Richfield, which was incorporated in 2005, became a publicly traded company on the TSX Venture Exchange in November 2007. Mr. Bernier strategically obtained financing and personally oversaw investor relations until Richfield was acquired in June 2011 for a value of over C$500 Million.

Dr. Dirk Tempelman-Kluit has more than 45 years of experience working in both British Columbia and the Yukon. Dr. Tempelman-Kluit was previously a director of the Geological Survey of Canada’s Cordilleran Division and held the positions of Vice President of Exploration and Director of Richfield Ventures Corp from 2004 to 2011. Dr. Tempelman-Kluit, the co-recipient of the 2011 H.H. “Spud” Huestis Award and a highly respected research geologist, recognized the existence of extensive hydrothermal alteration in drill core photographs that indicated the potential for significant gold mineralization on the Richfield Blackwater property. In March 2011, Richfield announced an initial indicated and inferred resource estimate of 4.2 million ounces due to Dr. Tempelman-Kluit’s foresight on the Blackwater property.

Mr. James Hedalen began with the Prosper Gold team prior to its qualifying transaction in 2013. His executive functions include aspects of financing, program planning, corporate operations, project development, GIS, databases and compliance. Prior to this, Mr. Hedalen was a member of Teck Resources’ corporate development team and spent 6 years as a GIS analyst. He is educated with a B.Sc (geography) from the University of Calgary, a post-graduate advanced diploma (GIS) from the BC Institute of Technology and an MBA (finance) from the University of British Columbia & IE business school in Madrid, Spain.

Mr. Douglas Cater is a professional geologist with more than 35 years of experience in the exploration and mining of precious metals, including project management of exploration programs and mining projects. Mr. Cater retired from his position as Vice President of Exploration at Kirkland Lake Gold Ltd. (2016 – 2019), and prior to that he was Vice President of Exploration at St Andrew Goldfields Ltd. (2012 – 2015). He was also the project manager for Sabina Gold and Silver Corporation’s Back River gold project (2009 – 2012) and the Exploration Manager for Dundee Precious Metals Inc. (2005 – 2009).

The information contained here is for information purposes only and is not to be construed as an offer or solicitation for the sale or purchase of securities. Readers should conduct their own research for all information publicly available concerning the company. Prior to making any investment decision, it is recommended that readers consult directly with Prosper Gold and seek advice from a qualified investment advisor.