Bunker Hill Mining (CSE:BNKR) is implementing an ambitious plan to re-commission one of the largest silver-lead-zinc mines in the Americas not in production. The Bunker Hill Mine is located in one of the most storied silver mining belts in North America, the Coeur d’Alene Mining District in Idaho’s Silver Valley. Coeur d’Alene contains a number of past-producing mines including Lucky Friday, Galena, Sunshine and Crescent. The district has a 115-year history of lead, zinc, silver and copper production, much of it taking place in shafts several thousand feet deep.

The jewel in the Coeur d’Alene crown is the Bunker Hill Mine—the oldest and largest producer in the valley. The mine is the largest lead-silver zinc advanced development project in the Americas not currently in production. Between 1887 and 1981 the mine produced 35,944,000 tonnes of ore, with lead grades of 8.76 percent, 3.76 percent zinc, and 4.53 ounces per tonne silver.

Bunker Hill Mining has a definitive agreement with Placer Mining Corp to acquire the Bunker Hill Mine Complex, including all mining rights and claims, underground equipment and infrastructure, and most machinery and buildings.

In March 2018, Bunker Hill announced that it had signed an agreement with the United States Environmental Protection Agency (EPA) and the Department of Justice, under which Bunker Hill was provided with full rights of operatorship on the project. The granted rights also remove all liability with regards to hazardous substances, pollutants or contaminants that migrated from the mine in the past. Under the agreement, the company will pay the EPA $20 million over a seven year period as well as semi-annual payments of $480,000 for ongoing water treatment costs incurred at the EPA’s central treatment plant.

“This agreement with the United States EPA and Department of Justice provides Bunker Hill or a subsidiary with the ability to operate the Bunker Hill Mine,” said Bunker Hill President and CEO Bruce Reid. “We can now accelerate the work required to re-open the mine. We will work together with the EPA to operate the mine in a way that will provide economic benefits for the local community in an environmentally prudent fashion.”

The company is planning a drill program to confirm the historical grades with intent to produce a NI 43-101 complaint resource estimate on the Bunker Hill Mine project by the mid 2018. The company is also in the process of identifying the appropriate processing plant for both toll milling and owner-operated scenarios.

Bunker Hill Mining is led by Bruce Reid, who has deep experience as a mine developer, including in the Silver Valley. Other members of the management team who have worked in the Coeur d’Alene Mining District include Chief Geologist Arthur Campo, Chief Financial Officer Julio DiGorolamo and Director John Ryan.

*SEC Compliant Resource not to be considered NI 43-101 compliant

One of the most storied mines in U.S. History

First discovered in 1887, Bunker Hill consolidated several deposits into one large mine, including a mill, smelter and lead/zinc refineries. Throughout its history, there were 40 different orebodies discovered and mined, mostly consisting of zinc-lead-silver mineralization. 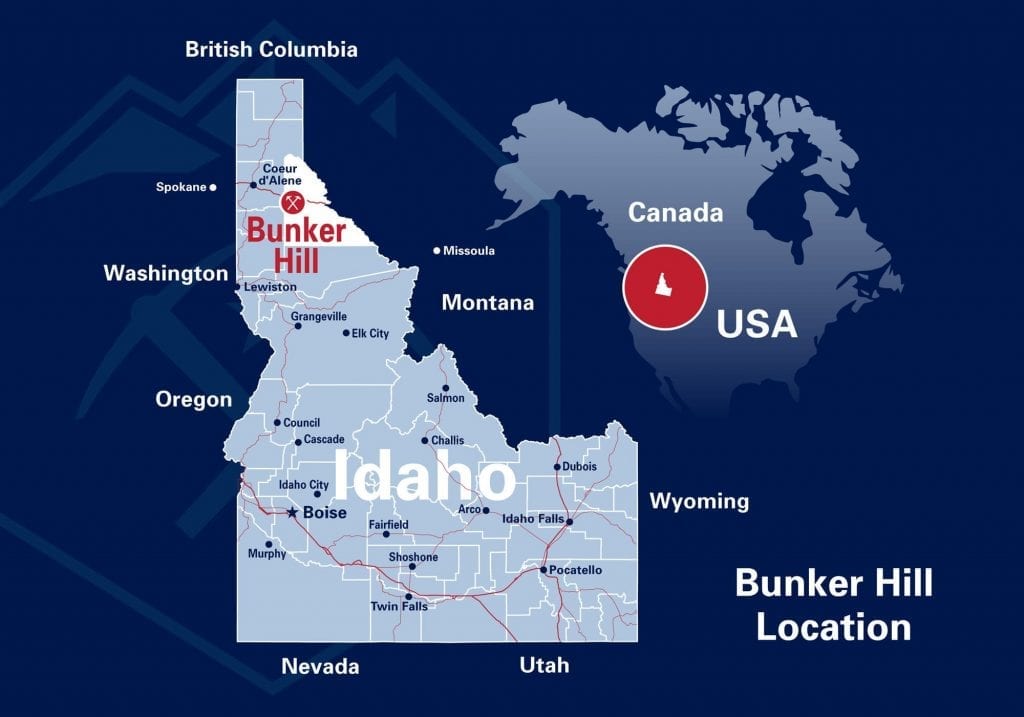 According to the latest resource estimate compiled in 1991, the mine contains 9.141 million tons of proven and probable reserves (2.35 percent lead, 1.29 ounces per ton silver, 5.08 percent zinc) in all zinc areas.

The most promising exploration target is the Quill/Newgard Zone, which has 4.94 million tons of proven and probable reserves between the 9 and 14 level. The ore is readily accessible for mining in the near term, at an initial 1,500 tons per day. Previous mining was done on all five levels, with nearly 500,000 tons of high-grade zinc ore discovered in the late 1970s. From historical drilling, the Quill Zone is known to continue from below the 2200 level to above the 2nd level – a height of over 4,000 feet. 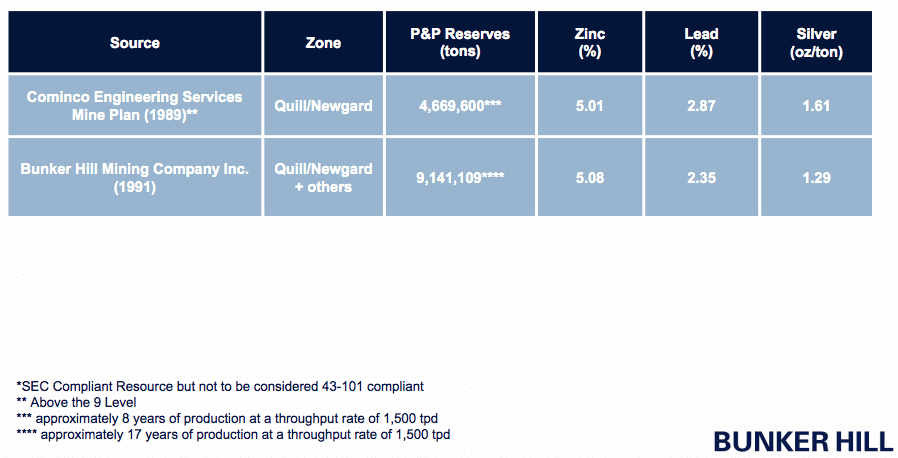 Bunker Hill Mining has a number of upcoming catalysts that will be of interest to investors. These include: Mine infrastructure rehabilitation, Engineering studies, drilling to confirm reserves, upgrading the resource to NI 43-101 standards, digitizing existing data, and confirming historical resources, a sampling program. 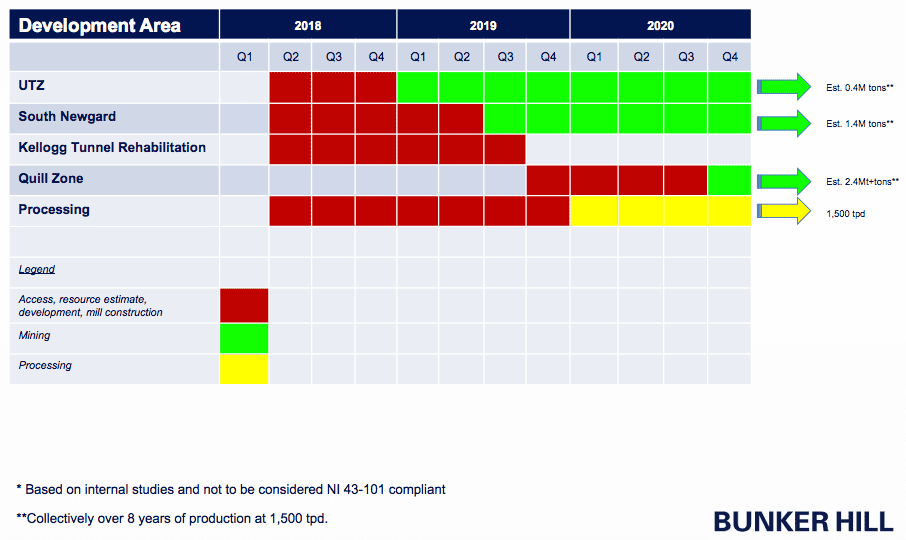 Bruce Reid was most recently the Chairman, President and Chief Executive Officer of Carlisle Goldfields from January 2010 until January 2016 when the Company was purchased by Alamos Gold Inc.  He is also currently a Director of Satori Mining Inc. and several other Public Mining Companies. He was also the Founder, President and Chief Executive Officer of US Silver Corp. from June 2005 to November 2008. Previous to this he was intimately involved in the startup and successful build and sale of numerous Mining Companies such as Western Goldfields, Patricia Mining and High Plains Uranium. He also has extensive experience in Corporate Finance and Mining Investment Research with a twenty-year career in the investment Business with such firms as Nesbitt Thomson, Loewen Ondaatje McCutcheon and Yorkton Securities. He combines all this with direct practice as an Exploration Geologist working on numerous projects in the Canadian North during the 1970s and early 1980s. His background of more than 35 years of direct and indirect experience in the mining and mineral exploration industry follows graduation with a BSc in Geology from the University of Toronto in 1979 and a finance degree from the University of Windsor in 1982.

Howard Crosby has over 25 years experience as an mining industry executive, having served as an officer and director of public companies listed in Canada, the United States and United Kingdom. Howard Crosby has been President of Crosby Enterprises, Inc., a family-owned business advisory consulting firm since 1989. From 1994 to June of 2006 he served as president and director of Cadence Resources Corporation, a publicly traded oil and gas company, which merged with an AMEX listed company in 2005. Crosby also was a founder and director of High Plains Uranium in 2004, and was a founder and director of U.S. Silver Corp in 2006, which acquired the Galena Mine in the Coeur d’Alene Mining District from Coeur d’Alene Mines in 2006. From 2004 until March 2016, Crosby was an officer and director of White Mountain Titanium Corporation, which is developing a world-class titanium project in Chile. Crosby is also a director or advisor to a number of privately held companies. He received a bachelor’s degree from the University of Idaho in 1975.

Julio DiGorolamo is the former CFO of Carlisle Goldfields, and the former president and corporate secretary of Greenstone Resources.

Jennifer Boyle is General Counsel / Corporate Finance for the Velocity Trade group of companies and sts as a member of the board of directors of Satori Resources Inc., KWG Resources Inc., and SGX Resources Inc.  She is a former securities lawyer who has been working at founding or re-organizing early-stage junior resource issuers, and at developing various growth strategies through M&A activities.  Formerly, she was a director of Carlisle Goldfields Limited (2012 to 2016) until it was acquired by Alamos Gold in January 2016. She sat on the board of directors of Nevada Exploration Inc. (2009-2015), was a co-founding director and Executive Vice President of Canadian Royalties Inc. (1997 to 2006), a co-founder and Executive Vice President of Golden Valley Mines Ltd. (2002 to 2005), the CEO of St. Eugene Mining Corporation prior to its sale to Claude Resources Inc. (2009 to 2012), and co-founder of Takara Resources Inc. (2005-2013).

Dickson Hall is a partner in Valuestone Advisory Limited, manager of Valuestone Global Resources Fund 1, a mining fund associated with Jiangxi Copper Corporation and China Construction Bank International. He has more than 40 years’ experience in the resource field, much of it in Asia. From 2005 to 2016 he directed corporate development efforts in Asia for Hunter Dickinson Inc. raising capital, establishing strategic partnerships and broadening the Asian shareholder base for HDI public companies. He was Senior Vice President of Continental Minerals Corporation which developed the Xietongmen copper-gold project in Tibet, China before selling to China’s Jinchuan Group in 2011 for $446 million. He is also a director and Investment Committee member of Can-China Global Resources Fund, an energy and mining fund backed by the Export-Import Bank of China. He is or has been a director of various resource and non-resource companies.

He is a graduate of the University of British Columbia (BA, MA) and has diplomas from Beijing University and Beijing Language Institute.

John Ryan has been an active entrepreneur in the resources sector for over twenty years.  He has extensive experience in the natural resource sector having served as an officer and/or director of companies such as Cadence Resources, High Plains Uranium, US Silver Corporation (now Americas Silver Corporation), and Western Goldfields, Inc.  He has extensive executive experience, and provides the Board of Directors with valuable insights regarding mining operations as well as public company expertise.  He  obtained a B.S. in Mining Engineering from the University of Idaho in 1985 and a Juris Doctor from Boston College in 1992.

Harold Roy Shipes is a metallurgical and mining engineer with over 40 years mining experience in global base and precious metals production, engineering, and project development management.  As VP and GM of Operations of Southern Peru Copper Corp., he was instrumental in conceptualizing and managing construction through start-up of the Cuajone smelter expansion, doubling throughput. As General Manager and CEO of Ok Tedi Mining Inc. he managed the expansion of the Company’s gold plant from 12,000 tpd to 35,000 tpd successfully in 18 months. He owned the engineering firm Western States Engineering and designed, constructed and/or commissioned six solvent extraction/electro-winning plants for copper recovery.

*Disclaimer: The profile provides information which was sourced and approved by Bunker Hill Mining in order to help investors learn more about the company. Bunker Hill Mining is a client of the Investing News Network (INN). The company’s campaign fees pay for INN to create and update this profile page, to which links are placed on Investingnews.com and channel newsletters.