This First Helium profile is part of a paid investor education campaign.*

The international supply of helium is expected to run into ongoing supply/demand imbalances in the near future. Why does this matter? The simple answer: helium is needed to supply various industries, including healthcare, semiconductors and aerospace. Given that helium is rare, non-renewable and non-substitutable in many cases, new and significant helium production is strongly needed.

As production of helium in the US becomes diminished attention has turned to adjacently-situated Canada, which has the fifth-largest helium resource in the world. Specifically, the province of Alberta is one of the best jurisdictions for exploration and development because it hosts helium-rich reserves. As a result, companies with projects in Alberta present an exciting opportunity for investors seeking to capitalize on the projected increase in helium demand and strong associated helium prices.

First Helium Inc. (“First Helium” or the “Company”) (TSXV:HELI) is a Canadian exploration and development company specializing in identifying and extracting helium in the province of Alberta. The Company strives to become a leading North American helium producer by leveraging a low-risk development project supported by its existing discovery well and adjacent undeveloped lands. First Helium is working to bring its discovery well into production to establish a strong base of cash flows. The Company’s management team, along with its board of directors and strategic advisory board, are highly experienced with previous success in oil and gas exploration and production, capital markets and finance, helium project development, construction and project management and mining exploration and development. 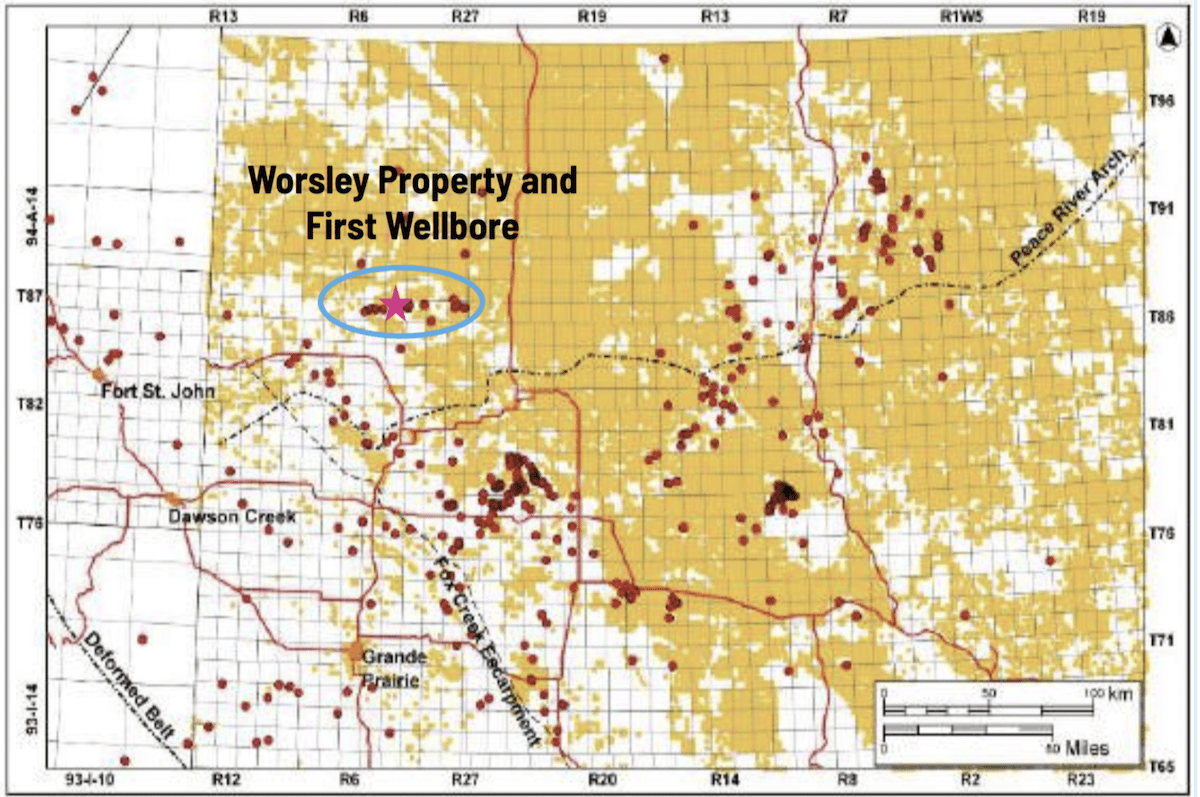 First Helium’s flagship Worsley project is located north of Grande Prairie, Alberta in the Western Canadian Sedimentary Basin (the “WCSB”). Helium content on the property was tested as high as 1.3 percent based over three long-term test periods. The net present value (“NPV”) of the contingent resource is estimated to be as high as $15.2 million (at a 10 percent discount rate) or $0.23 per basic share outstanding based on an independent engineering report conducted by Sproule Associates Limited (“Sproule”).

In March of 2021, First Helium raised approximately $12 million. The majority of the funds will be used to develop the Company’s Worsley project. The initial discovery well that is located on those lands is expected to be ready to produce helium by the end of 2022, following the installation of a scalable and modular processing facility. The development plan also includes a three-well program that is expected to increase the Company’s inventory of helium volumes at its core production area.

In addition to its core Worsley area, First Helium has an excellent opportunity to establish a significant second core area for exploration and development of helium in another proven productive region of the WCSB. Specifically, First Helium has entered into an agreement with a third-party Canadian company to explore for helium on over 350,000 contiguous hectares of highly prospective land in southern Alberta. Helium content is greater than 0.5 percent in a number of formations over the prospective land base. A key highlight of the agreement is that it provides First Helium access to approximately 360 sections of 3D seismic data and 530 km of 2D seismic data – necessary and typically costly information required for successful helium exploration.

First Helium also exhibits a strong and focused financing strategy. Through its long-term helium production plan, the Company aims to maintain a responsible capital structure and avoid any unnecessarily dilutive financings to develop its lands and facilities. Recently, First Helium fulfilled its goal of achieving near-term liquidity through its listing on the TSX-V on July 12, 2021 following the filing of its Final Prospectus.

First Helium also has a highly attractive valuation relative to its publicly-listed peer group, given its current assets and adjacent land assets. As of July 7, 2021, the Company’s market capitalization was under $20 million and its share structure consists of 65.6 million basic shares outstanding, 6.1 million options and 27.6 million warrants, for a fully-diluted share total of 99.3 million. First Helium’s approximate cash position was also approximately $8.5 million on the same date.

The Company is uniquely positioned for success based on the current timeline for its Worsley project. First Helium will be one of the fastest companies to enter production compared to other existing public companies in the helium industry. It believes that its resources will be low-risk given the existing discovery well and will provide significant helium yields based on current data indications. The Company also plans to set up off-take marketing arrangements with third-party distributors for its helium.

The Company’s flagship Worsley project is located north of Grande Prairie in northern Alberta. The property is situated in the geological WCSB and features a pre-existing well originally drilled by a previous operator targeting natural gas.

Historical testing data of the well revealed indications of the presence of helium. Upon further testing by First Helium, the Company acquired the property and this well became known as its “discovery well”.  In summary,  the discovery well has been tested over three long-term test periods at helium content of 1.3 percent. An independent engineering report conducted by Sproule, a third-party evaluator, estimated a best-case NPV of the contingent resource to be $15.2 million (at a 10 percent discount rate) or $0.23 per basic share.

First Helium expects its Worsley project to be fully funded and ready to produce helium by the end of 2022, following the installation of a scalable and modular processing facility, with preliminary engineering on the facility already having been completed.

Vance Loeber has over 30 years of international business experience. Loeber has been involved in the financing and promotion of early-stage to production level resource companies for over 20 years. Loeber was directly involved in the launch of the US Silver mine which is currently the largest pure silver mine in the United States.

He was one of the founders of Sandspring Resources, which raised over $60 million and took the Toroparu gold deposit in British Guyana to over 10 million ounces. His extensive network is focused on Europe, Asia and North America where he matches investors with the capital requirements of public companies. Loeber was one of the founders of Carlisle Goldfields, recently taken over by Alamos Gold at over a 100% premium to the market.

Bereznicki’s experience includes over 15 years of Corporate Finance, Capital Markets, and Financial Advisory Expertise as Senior Energy Investment Banker, including over $20 Billion of equity and convertible debt raised for Energy Sector, including successful start-ups and IPOs.  He was also involved in over 30 successful M&A transactions totaling more than $4.5 Billion in value. He is a seasoned Energy Executive with E&P, risk management, operations, and pipelines experience, domestic and international.

Robert J. Scott is a chartered accountant with over 20 years of professional experience in corporate finance, accounting, merchant and commercial banking. He has served in management and on the boards of several Canadian companies. He is currently the CFO at Riverside Resources and Northair Silver Corp., and a director of Entourage Metals Ltd. Scott is also a co-founder and a director of Pan American Hydro Corporation – a private company involved in developing small hydro projects in Latin America. Scott earned his CA designation in 1998, his CFA designation in 2002 and has a B.Sc. from the University of British Columbia.

The information contained here is for information purposes only and is not to be construed as an offer or solicitation for the sale or purchase of securities. Readers should conduct their own research for all information publicly available concerning the company. Prior to making any investment decision, it is recommended that readers consult directly with First Helium and seek advice from a qualified investment advisor.

A Global Helium Shortage: Why This Investment Opportunity is Heating Up
Helium: What You Need to Know About This Critical Element
First Helium: Exploring Highly Prospective Helium Trends in the Western Canadian Sedimentary Basin
VIDEO — Gianni Kovacevic: Higher EV Costs Won’t Stop Buying (in the West)
×
Request an Investor Kit: