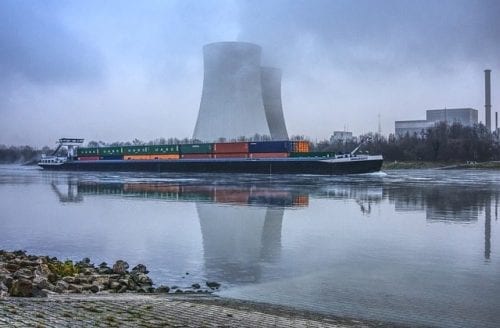 Seldom found alone, uranium deposits often host vanadium or rare earths in varying amounts. Uranium reacts with most non-metal elements and their compounds, except noble gases. Its reactive properties increase with temperature; when refined, uranium is silvery white and only weakly reactive.

Of those two isotopes, U-235 is the most important, as it is the one most commonly used in nuclear fuel. That is because it is fissile, meaning that under certain conditions the isotope can be split; this division creates a significant amount of energy.

Uranium investing: What uranium is used for

Using uranium to fuel power plants has allowed a growing list of countries worldwide to slowly move away from coal-fired power plants and the fossil fuel industry, which produce large amounts of environmentally damaging emissions.

The nuclear energy sector is steadily growing, with 50 reactors in various stages of construction globally.

Radioactive isotopes are an important use of uranium too. With a foothold in the medical, industrial and agricultural sectors, radioisotopes play a bigger role in daily life than many people realize.

There are several countries where uranium mining is robust industry. However, in terms of annual global uranium production, Kazakhstan, Canada and Australia are the leaders by far. The three nations contribute more than one third of the world’s uranium supply.

Canada’s Athabasca Basin is considered one of the highest-quality areas for uranium due to the dense uranium ore it holds. Located in Saskatchewan, it is home to quite a few uranium companies, including sector major Cameco (TSX:CCO,NYSE:CCJ).

Low uranium prices have hampered production levels in recent years, with some major operations going into care and maintenance until prices are higher. The 2011 Fukushima nuclear disaster is largely responsible for these low prices and has hampered demand in the years since it occurred.

Uranium investing: Why enter the market?

With the global population growing and undergoing continuous urbanization, the need to keep the lights on is more important than ever. By 2030, electricity consumption will have doubled from 2007 levels, with a significant portion of that stemming from nuclear power.

In fact, China alone is constructing between six and eight new reactors, and the country plans to get five up and running as well. Over 20 nuclear reactors are planned in Russia, and similarly India has 22 nuclear reactors with seven nuclear power plants.

Despite that growth, the uranium industry has struggled in recent years. As mentioned, the 2011 Fukushima nuclear disaster plunged the market into oversupply, and the uranium price has been depressed since, even though miners have made production cuts and even closed mines entirely.

That said, many market watchers are optimistic that the supply surplus will soon end, citing growing global demand and shrinking stockpiles throughout the industry. A number of analysts also believe the bottom of the uranium market cycle has been hit. They predict price increases for the metal, and believe these supply and demand fundamentals are what make uranium investing an attractive prospect.

Because it is an important element in the advancement of clean energy, there are a variety of ways for investors to get exposure to uranium. Unlike gold or silver, participants cannot invest directly in physical uranium; however, there are several other ways to get involved in the nuclear energy market.

Investing in uranium-mining companies, which offer a choice between uranium miners and explorers, is one way. Another is choosing a uranium exchange-traded fund.

Investing in companies that run electric power or nuclear plants is yet another option, and investors can also look at uranium futures as an energy sector investment vehicle.

Get Your Free Report Now!
See our exclusive index of Uranium companies on the move
EXPLORE