Boreal Metals Corp. is pleased to announce ongoing exploration on its 100% owned silver-zinc-lead-gold Gumsberg Project located in the Bergslagen Province of Southern Sweden.  Boreal is conducting soil sampling at the past producing Fredriksson Mine  as part of an ongoing initiative to advance the target to drill testing . “The Fredriksson Mine contains silver-zinc mineralization reminiscent of Broken Hill-type …

Boreal Metals Corp. (“Boreal” or the “Company”) (TSXV: BMX) is pleased to announce ongoing exploration on its 100% owned silver-zinc-lead-gold Gumsberg Project located in the Bergslagen Province of Southern Sweden.  Boreal is conducting soil sampling at the past producing Fredriksson Mine (21,000 tonnes grading 53 gt silver, 5.13% zinc, and 1.7% lead from a test pit; and 45,000 tonnes grading 49 gt silver, 5.77% zinc and 1.84% lead underground) as part of an ongoing initiative to advance the target to drill testing (Figure 1).

“The Fredriksson Mine contains silver-zinc mineralization reminiscent of Broken Hill-type Pb-Zn-Ag (BHT) deposits, named after the Broken Hill Deposit, the largest accumulation of Pb-Zn-Ag on Earth1,2″, stated Patricio Varas, Chairman and CEO of Boreal.  “Boreal is committed to advancing Fredriksson to drill testing as a significant step forward for the Company and is part of a broader strategy to conduct exploration drilling in three significant areas with past production including Ostra Silvberg, Vallberget-Loberget and Fredriksson.”

A total of 112 soil samples colleced at 15-25 centimetres below the organic horizon across 3 test lines with an average sample station spacing of 15 metres and an average line spacing of 100 metres.  Soil samples are analyzed by portable x-ray fluorescence (XRF) and by ALS Scandinavia AB for Ionic Leach (ME-MS23) and Leach PH (pH-MS23).  A duplicate sample was collected every 20 samples.  Blind geochemical standards were not incorporated into the orientation survey.

Fredriksson Gruva was discovered in 1976 by LKAB Prospektering AB.  Exploration was carried out in 1976 and 1977 including surface trenching, sampling and 9 diamond drill holes which identified precious metal enriched base metal mineralization.  In 1977, AB Statsgruvor (ABS) acquired the Fredrikssongruvan prospect and conducted open pit test mining in 1978.  Test mining was conducted to a depth of 20 metres below surface and produced 21,500 tonnes grading 53 g/t silver, 5.13% zinc and 1.7% lead, and to a depth of 20 metres 19783.  A total of 11 additional holes were drilled in 1979 to test the down plunge extent of mineralization.  Between 1980 and 1981 mining activites resumed and an underground tram was installed.  A total of  45,000 additional tonnes grading 49 g/t silver, 5.77% zinc and 1.84% lead were produced from workings that extend to a depth of 91 metres (4 underground levels)2.  Also during this period, 4 holes were drilled and a core relogging progam was completed.  In addition, surface trenching and a magnetic gephysical survey was completed.  Boreal staked the Fredriksson Gruva prospect as part of a larger staking acquisition (Gumsberg nr 9) in March 2017.  This licence is refered to as “Gumsberg West” and forms the western half of the highly prospective Gumsberg Project. 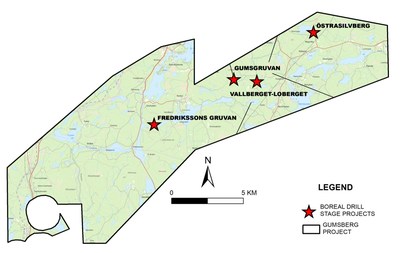 Boreal is a mineral exploration company focused on the discovery of silver, zinc, copper and gold deposits in exceptional, historical mining project areas spanning Sweden and Norway.  The Company aims to discover new economic mineral deposits in known mining districts that have seen little or no modern exploration techniques.  The Company is led by experienced board, management and technical teams, each with successful track records in mineral discovery, mining development and financing.

Daniel MacNeil, P.Geo, a Qualified Person as defined by National Instrument 43-101 Standards of Disclosure for Mineral Projects, has read and approved all technical and scientific information contained in this news release.  Mr. MacNeil is Vice President Exploration for Boreal.

On behalf of Boreal Metals Corp.

This news release contains certain statements that may be deemed “forward–looking statements”.  Forward–looking statements are statements that are not historical facts and are generally, but not always, identified by the words “expects”, “plans”, “anticipates”, “believes”, “intends”, “estimates”, “projects”, “potential” and similar expressions, or that events or conditions “will”, “would”, “may”, “could” or “should” occur.  Forward-looking statements may include, without limitation, statements relating to future outlook and anticipated events, such as the successful completion of the Private Placement or the anticipated use of proceeds of the Private Placement by the Company. Although Boreal believes the expectations expressed in such forward–looking statements are based on reasonable assumptions, such statements are not guarantees of future performance, are subject to risks and uncertainties, and actual results or realities may differ materially from those in the forward–looking statements.  Such material risks and uncertainties include, but are not limited to, Boreal’s ability to raise sufficient capital to maintain its mineral tenures and concessions in good standing, to explore and develop its projects, to repay its debt and for general working capital purposes; changes in economic conditions or financial markets; the ability of Boreal to obtain the necessary permits and consents required to explore, drill and develop the projects and if obtained, to obtain such permits and consents in a timely fashion relative to Boreal plans and business objectives for the projects; the general ability of Boreal to drill test its projects and find mineral resources; if any mineral resources are discovered or acquired, the Company’s ability to monetize any such mineral resources; and changes in environmental and other laws or regulations that could have an impact on the Company’s operations. Forward–looking statements are based on the reasonable beliefs, estimates and opinions of Boreal management on the date the statements are made. Except as required by law, Boreal undertakes no obligation to update these forward–looking statements in the event that management’s beliefs, estimates or opinions, or other factors, should change.

on Boreal please visit the Company website at www.borealmetals.com or contact us at +1.604.922.8810 or info@borealmetals.com.Copyright CNW Group 2020