Mind Medicine is developing technologies and analytics that seek to personalize psychedelic therapy experiences for a specific patient.

MindMed, in collaboration with the University Hospital Basel, has filed two separate patent applications for technologies to screen and optimize the dosing of MDMA and LSD

– Mind Medicine (MindMed) Inc. (NEO: MMED OTCQB: MMEDF), the leading neuro-pharmaceutical company for psychedelic inspired medicines, is developing technologies and analytics that seek to personalize psychedelic therapy experiences for a specific patient. The technology aims to optimize the dosing of MDMA, LSD and other psychedelics based on a patient’s profile. The R&D is taking place in collaboration with the University Hospital Basel’s Liechti Lab, the leading research center focused on the pharmacology of psychedelic substances. 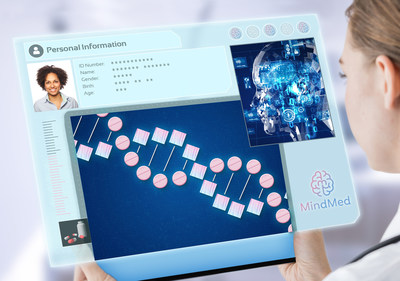 A considerable problem for doctors, clinical researchers, and therapists is to understand and predict optimal doses of psychedelic inspired medicines for patients.

Through its clinical research, Liechti Lab has identified novel ways to predict and also optimize the amount of a psychedelic dose and dosing regimen for therapy. In order to assemble a patient’s personalized dosing regimen and therapy session, MindMed and Liechti Lab’s analytics method aggregates multiple data and criteria of patients in a pre-dose screening and analysis process. MindMed intends to apply this personalized medicine approach to psychedelic assisted therapies for patients suffering from mental health and addiction issues.

MindMed Co-Founder and Co-CEO JR Rahn said, “One size never fits all. Healing through psychedelics is a deeply personal process and we believe the personalization of psychedelic therapies is pivotal to the future of this fast growing field of medicine. Through such analytics and dosing technologies we hope to give patients the best possible outcome from their therapy experiences.”

University Hospital Basel’s Dr Matthias Liechti and Co-Inventor of the technology said “The dosing optimization approach includes dosing based on solid dose-response data, simple adjustments based on gender and body weight, but also includes pharmacogenetic and personality predictors to optimize dosing to induces specific mental states. MindMed has provided the long needed resources to ensure our Lab’s inventions can be further developed and hopefully reach the market faster and safer than ever before.”

MindMed possesses the world’s leading collection of human safety data and pharmacokinetics for both MDMA and LSD based on clinical studies. MindMed previously acquired the world-wide exclusive license to this collection of human safety data and pharmacokinetics on both LSD and MDMA from the University Hospital Basel. This data set is based on over 10 years of scientific and clinical research at the Liechti Lab.

Liechti Lab is based at the University Hospital Basel in Basel Switzerland. Founded in 1460, the University of Basel is the oldest university in Switzerland and has a history of success going back over 550 years. Liechti Lab’s research focus is on the pharmacology of psychoactive substances in vitro and in humans. The Laboratory investigates the pharmacokinetics-pharmacodynamics of MDMA, LSD, and amphetamines in humans including psychological tests, pharmacogenetics, and functional brain imaging.

About MindMed
Mind Medicine (MindMed) Inc. is a neuro-pharmaceutical company that discovers, develops and deploys psychedelic-inspired medicines to improve health, promote wellness and alleviate suffering. The company’s has initiated or is initiating studies to evaluate potential treatments to help patients with ADHD, anxiety, cluster headaches and substance abuse. The MindMed executive team brings extensive biopharmaceutical industry experience to this groundbreaking approach to the development of next-generation psychedelic medicines. MindMed trades on the NEO Exchange under the symbol MMED. MindMed can also be traded in the US under the symbol OTC: MMEDF and in Germany under the symbol DE:BGHM. For more information: www.mindmed.co.

Curious about this new market?Find out what new psychedelics investors need to know.

×
See our exclusive index of Psychedelics companies on the move
EXPLORE