E3 METALS CORP. an emerging lithium developer and leading lithium extraction technology innovator, today announces the discovery of lithium enrichment in the Nisku Aquifer located within the Company’s permit area in south-central Alberta, with sampled lithium grades ranging up to 75.0 mgL. The Nisku is located above the Leduc Aquifer in which E3 Metals holds 6.7 million tonnes of LCE1 inferred mineral resource . …

The Nisku is located above the Leduc Aquifer (the “Leduc”), in which E3 Metals holds 6.7 million tonnes of LCE1 inferred mineral resource (Figure 1). The Nisku stretches across E3 Metals‘ entire permit area where the Company owns the metallic and industrial mineral rights, which include the rights to the lithium within the Nisku. The Nisku has similar geological properties to the Leduc, and as such, it has a comparable propensity for high brine flow rates that may support the production of commercial quantities of lithium. 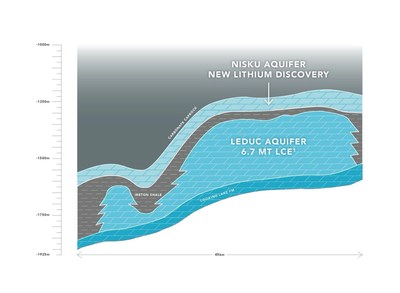 The Company sampled Nisku brine as well as the Leduc brine from available oil and gas production wells as part of E3 Metals‘ ongoing exploration and development. A total of 17 samples were collected across the Nisku and all have demonstrated the presence of higher-grade dissolved lithium within the formation brine. Lithium grades range between 37.4 mg/L and 75.0 mg/L. Using E3 Metals‘ proprietary direct lithium extraction (DLE) process, Leduc brines with grades on the top end of Nisku’s sampled range  have demonstrated the ability to quickly and efficiently concentrate to over 5000 mg/L.

“The discovery of lithium in the Nisku expands the known lithium brine volumes and may offer operational benefits,” commented Chris Doornbos, President and Chief Executive Officer of E3 Metals. “The Nisku is laterally extensive across our permit area and has similar aquifer properties to the Leduc, so it will produce brine in much the same way. Wells drilled to access the Leduc intersect the Nisku first, which may allow us  to produce lithium enriched brines from both aquifers from the same well, potentially increasing operational efficiencies in the future.”

E3 Metals will continue to sample the aquifer as part of its regular sampling program going forward, with the intention of developing a resource from the Nisku Aquifer in the future.

An aquifer is a rock formation that has the ability to hold fluids inside of void spaces, or pores, within the rock. The interconnectivity of these pores (permeability) allow fluids to move through the rock. The Nisku and Leduc Aquifers are classified as “confined aquifers”, meaning they are not connected to the surface or any shallow, fresh, groundwater sources. As well, the fluids in the aquifers are contained under pressure which naturally assist with fluid production.

The Leduc and Nisku Aquifers in E3’s project area occur about 2-3 km below the earth’s surface. They have very high porosity and permeability, which allows for high volumes of fluids to be pumped from them. They are famous in Alberta as important producers of hydrocarbons. These hydrocarbons accumulated over geologic time in the aquifer and sit buoyantly atop the lithium brine. The hydrocarbons represent a very small fraction of the fluids contained in the aquifer and have mostly been depleted in this area after 60 years of oil production. What remains in these aquifers is lithium enriched brine.

E3 Metals is a lithium development company with 6.7 million tonnes of lithium carbonate equivalent (LCE) inferred mineral resources1 in Alberta.  E3 Metals is currently advancing its proprietary direct lithium extraction (DLE) process in partnership with Livent Corporation (NYSE:LTHM), a global leader in lithium production, under a joint development agreement.  Through the successful scale up its DLE process towards commercialization, E3 Metals plans to quickly move towards the production of high purity, battery grade, lithium products.  With a significant lithium resource and innovative technology solutions, E3 Metals has the potential to deliver lithium to market from one of the best jurisdictions in the world.  E3 Metals also continues to work with partners at the University of Alberta and at GreenCentre Canada. For more information about E3 Metals, visit www.e3metalscorp.com.

Chris Doornbos (P.Geo), CEO and Director of E3 Metals Corp., is a Qualified Person as defined by NI 43-101 and has read and approved the technical information contained in this announcement.