QMX Gold Corporation is pleased to release additional assay results from the Winter 2020 drilling program from the Bonnefond Deposit.

QMX Gold Corporation (“QMX” or the “Company”) (TSXV:QMX) is pleased to release additional assay results from the Winter 2020 drilling program from the Bonnefond Deposit (Table 1). The Bonnefond Deposit is located in the Val d’Or East Zone of QMX’s extensive land package in Val d’Or, Quebec (Figure 2).

Highlights include (Grades are uncut; lengths are measured along the holes, Table 1):

“Since 2017, when QMX first began drilling at Bonnefond, this deposit has continuously shown its strong upside potential. As with all the previous drilling campaigns, the results from the Winter Program consistently expand the project both in size and grade. We anticipate this will continue as we explore the shear zones to the north of the deposit over the summer months”, commented Brad Humphrey, President and Chief Executive Officer. “In the coming weeks and months, we look forward to a number of key catalysts including, the Bonnefond resource update and further drill results from Bonnefond and River and the initial results from the Poulmaque target.”

“We are very excited to once again show that our Bonnefond project is high in grade, especially where the shear zones are in contact with the tonalite intrusion”, says Dr. Andreas Rompel, Vice President Exploration, “and we are looking forward to an updated resource estimate for Bonnefond later this summer.”

The Bonnefond deposit is composed of a tonalitic intrusion with an elliptical shape measuring approximately 250m by 60m and dipping 70 degrees to the north-east and a series of mineralized shear zones dipping 45 degrees to the north which lie south of the intrusive body.

The three drill holes included in this batch of assays are located in the central part of the Bonnefond deposit (Figure 2). DDH 114 and 117 targeted the series of shear zones located to the south and north of the tonalite. They both intercepted grades typical of the Bonnefond intrusive. DDH 117 was also successful at intersecting high-grade mineralization in a shear zone south of the intrusive which assayed 29.38 g/t Au over 5.6m including 111.70 g/t Au over 1.4m.

DDH 119A was drilled close to the eastern edge of the intrusive, down plunge, to test grade continuity between pre-existing drill holes. Mid-way along its length the hole exited the tonalite but re-entered it about 60m further down the hole. The drill hole returned two sections of mineralized tonalite grading 1.79 g/t Au over 228.7m and 1.05 g/t Au over 184.3m.

The three drill holes intersected several high-grade zones within the tonalite with grades ranging from 4.55 g/t Au over 2.8m to 13.58 g/t Au over 7.0m. 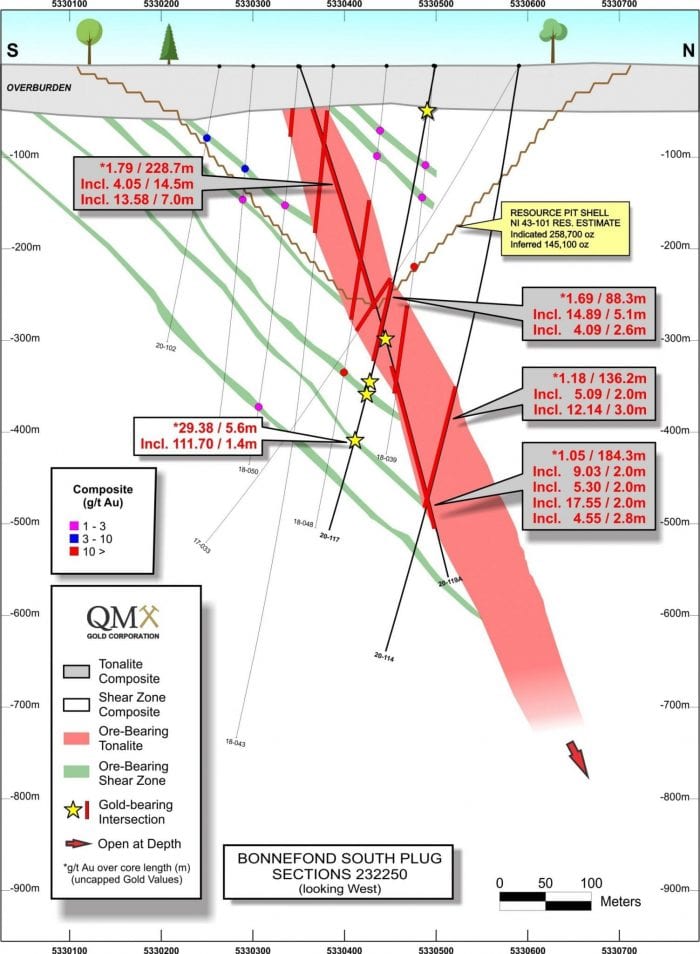 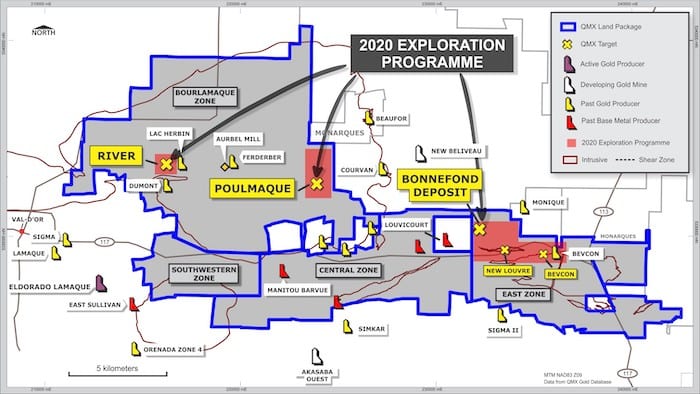 At the Bonnefond Deposit, QMX is in the process of updating the 2019 43-101 resource estimate and has commenced a 10,000m exploration program on Bonnefond to test for new mineralized shear zones north of the current pit shell. Drilling results, compilation and close-by projects suggest the currently known series of shear zones could extend further north on the Bonnefond property.

The planned reconnaissance drilling program on the Poulmaque Target, located on the eastern side of the Bourlamaque batholith, will commence shortly. The objective of this initial program of at least 3,000m is to narrow the target area.

The scientific and technical content of this press release has been reviewed, prepared and approved by Mélanie Pichon, P.Geo, M.Sc, Exploration Manager, who is a “Qualified Person” as defined by National Instrument 43-101 – Standards of Disclosure for Mineral Projects (“NI 43-101”).

QMX Gold Corporation is a Canadian based resource company traded on the TSX Venture Exchange under the symbol “QMX”. The Company is systematically exploring its extensive property position in the Val d’Or mining camp in the Abitibi District of Quebec. QMX Gold is currently drilling in the Val d’Or East portion of its land package focused on the Bonnefond Deposit and in the Bourlamaque Batholith. In addition to its extensive land package QMX Gold owns the strategically located Aurbel gold mill and tailings facility.