NV Gold Corporation is pleased to announce, with the recent completion of an oversubscribed private placement on May 26th, 2020, the Company is now finalizing its 2020 follow-up exploration plans for its Slumber Gold Project.

NV Gold Corporation (TSXV:NVX)(OTC PINK:NVGLF) (“NV Gold” or the “Company“) is pleased to announce, with the recent completion of an oversubscribed private placement on May 26th, 2020, the Company is now finalizing its 2020 follow-up exploration plans for its Slumber Gold Project. In addition, NV Gold is now expanding its review on its Sandy Gold Project (“Sandy”) in Lyon County Nevada based on historical results at the project, but more specifically noting recent results announced by Eclipse Gold Mining (TSXV:EGLD) (“Eclipse”) on June 10th, 2020 at its Hercules Gold Project. Sandy, acquired prior to the staking of the Hercules claim block by Eclipse, is now strategically located completely within the Hercules claim block.

Based on positive results from the fall of 2019, NV Gold has engaged Zonge International, of Reno, Nevada to complete a controlled source audio-magnetotelluric (“CSAMT“) geophysical survey at the Slumber Gold Project during the summer of 2020. Based on results from the upcoming CSAMT survey during the summer of 2020, a more defined drill program will be developed to test for the feeder structures at depth commencing later in the summer.

Gold mineralization encountered in 2019 over significant lengths in two holes (SL-02 and SL-01), nearly 450 meters apart, suggests the presence of a large gold-bearing hydrothermal system in the sub-surface. Based on proven success of the use of the CSAMT technology at other epithermal projects, NV Gold believes this will help us vector in on potential mineralized structures at depth.

“The initial drill program at Slumber in the fall of 2019 identified what we believe to be a promising gold system, and we anticipate CSAMT targets will be tested by reverse circulation drilling later in the summer of 2020,” commented Peter A. Ball, CEO of NV Gold. “At our Sandy Gold Project, acquired for just staking costs in the fall of 2019, we are now reviewing 2020 exploration plans noting both historical results from the 1990s and recent positive drilling identified by Eclipse Gold Mining at its Hercules Gold Project and announced on June 10th, 2020.” 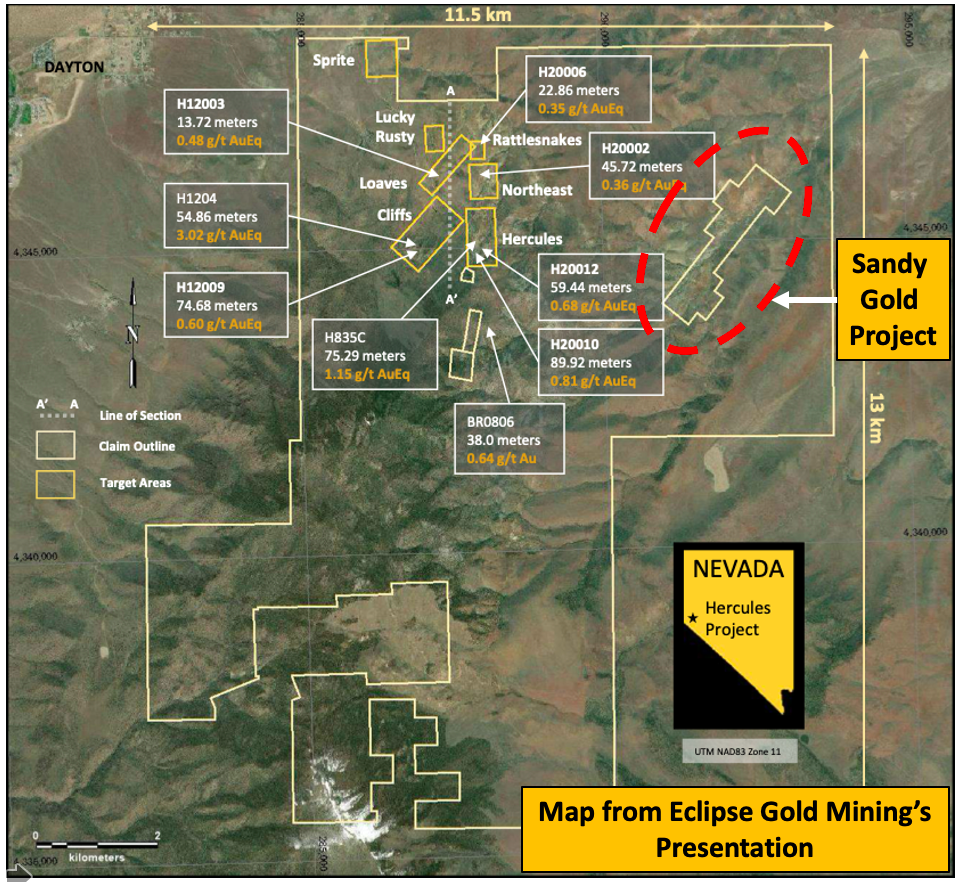 CSAMT is a low-impact, ground geophysical survey method that involves determining electrical resistivity of rocks. CSAMT data is desirable as it provides critical information about geologic structure, and in the case of epithermal systems such as Slumber, identifying areas of silicification that develop around the structural ‘plumbing’ of the hot spring, places where mineralized veins might be found. CSAMT combined with audiomagnetotellurics is useful for mapping resistivity to around the 1,000-meter depth range. The prospective boiling zone, where high-grade mineralization can occur within an epithermal system, is commonly at depths ranging from 300-500 m below paleo-surface.

Quinton Hennigh (Ph.D., P.Geo.) is a Qualified Person pursuant to National Instrument 43-101 and has reviewed and approved the technical information contained in this news release. Dr. Hennigh is a director of NV Gold and is not independent and is also the President, Chairman and a Director of Novo Resources Corp.

The Company announces that it has granted incentive stock options to officers, directors and consultants under its Stock Option Plan entitling them to purchase an aggregate of up to 1,350,000 common shares of the Company. The stock options are exercisable on or before June 11, 2025 at a price of $0.20 per share, subject to TSX Venture Exchange acceptance. The option pricing represents an approximate 25% premium to the Company’s closing share price on June 11, 2020.

NV Gold is a junior exploration company based in Vancouver, British Columbia that is focused on delivering value through mineral discoveries. Leveraging its highly experienced in-house technical knowledge, NV Gold‘s geological team intends to utilize its geological databases, which contains a vast treasury of field knowledge spanning decades of research and exploration, combined with a portfolio of mineral properties in Nevada, to prioritize key projects for focused exploration programs.

This news release includes certain forward-looking statements or information. All statements other than statements of historical fact included in this release, including, without limitation, and other future plans and objectives of the Company including; (i) further exploration and the timing thereof at the Slumber or Sandy Gold Project, (ii) that previous results suggest the presence of a large gold-bearing hydrothermal system in the sub-surface, and (iii) that a CSAMT survey will help the Company vector in on potential mineralized structures at depth, are forward-looking statements that involve various risks and uncertainties. There can be no assurance that such statements will prove to be accurate and actual results and future events could differ materially from those anticipated in such statements. Important factors that could cause actual results to differ materially from the Company’s plans or expectations include regulatory issues, market prices, availability of capital and financing, general economic, market or business conditions, timeliness of government or regulatory approvals and other risks detailed herein and from time to time in the filings made by the Company with securities regulators. The Company disclaims any intention or obligation to update or revise any forward-looking statements whether as a result of new information, future events or otherwise except as otherwise required by applicable securities legislation.