Company geologists have been reviewing the Dakouli concession for potential drill set ups, and during recent site visits noted an increase in artisanal mining activity along strike at the main mineralized zone. The crew collected three rock samples from new areas being exploited artisanal miners (“orpailleurs”). A result of 10.8 grams-per-tonne (“g/t”) gold (“Au”) was returned from sample DK-27. This sample consisted of crushed mined material which had undergone preliminary gold extraction by panning. The remaining two samples were taken from workings proximal to the location of the orpailleurs extraction operations and returned 0.02 g/t au and 1.6 g/t Au respectively.

The Company is encouraged by the increased strike activity which now extends the limits of the eastern zone some 200 meters to the east, thus expanding the zone of mineralization to over 400 meters along an east-west trend while also measuring over 200 meters in a north-south direction. As the Company prepares for an upcoming drill program it will continually monitor the increased artisanal activities along this mineralized trend.

“Dakouli remains a priority for Nexus, and one we intend to drill as soon as possible,” said president & CEO, Alex Klenman. “We had planned to conduct a maiden drill program there late last year before in-country delays surfaced and then the global pandemic hit in Q1 this year. We’d like to get a drill program done once the rainy season ends later in the summer. The mineralization is widespread and continues to produce double digit samples. We feel the upside here is clearly evident, and a compelling case for multiple drill programs has already been established,” continued Mr. Klenman.

About the Dakouli II Gold Concession

In late 2018 Company geologists conducted a comprehensive ground reconnaissance program to the west and south of the main orpaillage (artisanal zone) and identified new near surface workings being exploited by artisanal miners. Rock samples collected from these new zones returned contained various concentrations of visible gold, including coarse nuggety samples.

A total of 12 samples were taken from the Northeast Zone, obtained between 8-18 meters below surface from artisanal shafts and pits, with six returning significant grades between 2.90 g/t Au and 29.5 g/t Au, including 27.5 g/t Au and 12.4 g/t Au from samples containing visible gold (see Figure 1, and Company news release dated January 8, 2019). 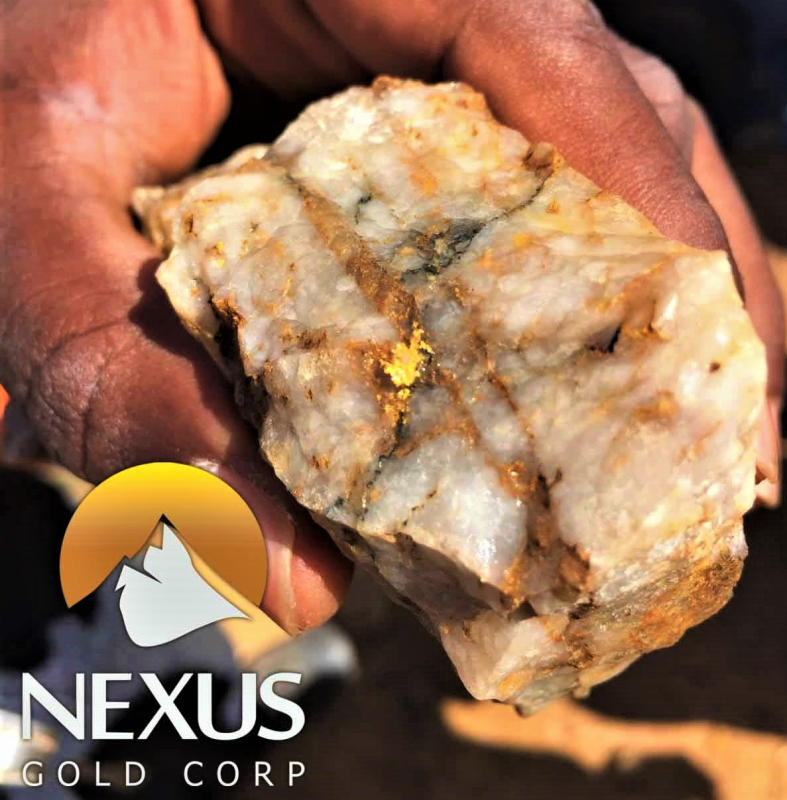 Follow up work outlined an anomalous zone extending some 500 meters west from the sample zones. Based on those results the Company initiated a 150-line kilometer soil geochemical survey covering the northern half of the Dakouli II property and southern portions of the contiguous Niangouela property. This survey identified three prominent gold geochemical trends. The primary gold trend parallels the Sabce fault zone extends for approximately 10 kilometers, in a northeast – southwest direction and bisects the property from the north east corner of the property to its western boundary. The Sabce fault hosts multiple deposits including Nordgold’s 3.4M oz Bissa Mine, located approximately 25km east of the Dakouli ground.

Two secondary gold trends which extend for approximately 6.5 kilometers each are oriented in a northwest to southeast direction and bisect the primary trend. All three gold geochemical trends are coincidental to geophysical trends identified from the national regional airborne geophysics. The geochemical surveys and sampling work done to date have generated multiple compelling targets the Company intends to begin testing in this initial drill program. 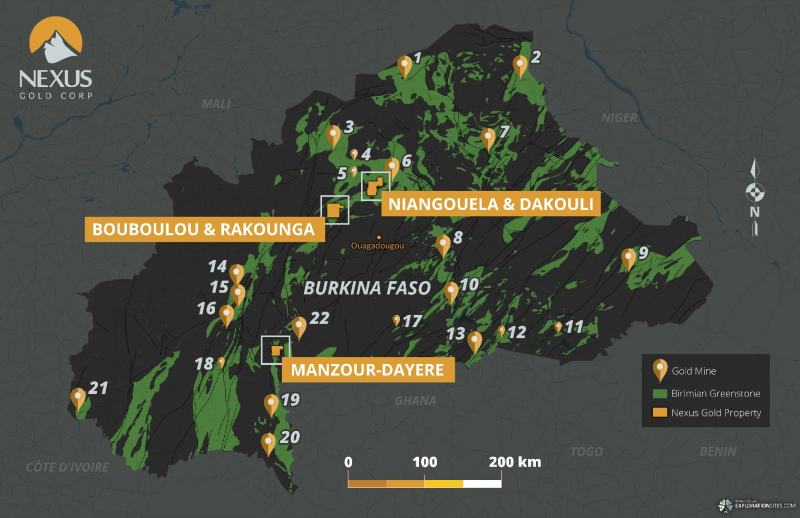 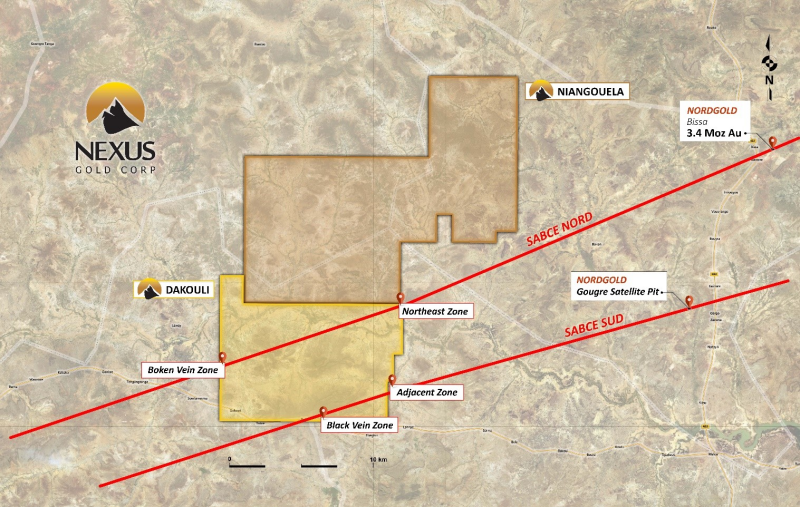 Nexus Gold is a Canadian-based gold exploration and development company with an extensive portfolio of eleven projects in Canada and West Africa. The Company’s West African-based portfolio totals five projects encompassing over 750-sq kms of land located on active gold belts and proven mineralized trends, while it’s 100%-owned Canadian projects include the McKenzie Gold Project in Red Lake, Ontario, the New Pilot Project, located in British Columbia’s historic Bridge River Mining Camp, and four prospective gold and gold-copper projects (3,700-ha) in the Province of Newfoundland. The Company is focusing on the development of several core assets while seeking joint-venture, earn-in, and strategic partnerships for other projects in its growing portfolio.

Neither the TSX Venture Exchange nor its Regulation Services Provider (as that term is defined in the policies of the TSX Venture Exchange) accepts responsibility for the adequacy or accuracy of this release. This news release may contain forward-looking statements. These statements are based on current expectations and assumptions that are subject to risks and uncertainties. Actual results could differ materially because of factors discussed in the management discussion and analysis section of our interim and most recent annual financial statement or other reports and filings with the TSX Venture Exchange and applicable Canadian securities regulations. We do not assume any obligation to update any forward-looking statements, except as required by applicable laws.