MacDonald Mines Exploration Ltd. announces that it has launched its Summer 2020 exploration program at its SPJ property, located 20km east of Sudbury Ontario.

MacDonald Mines Exploration Ltd. (TSXV:BMK) (“MacDonald Mines”, “MacDonald” or the “Company”) announces that it has launched its Summer 2020 exploration program at its SPJ property, located 20km east of Sudbury Ontario.  Drilling has restarted with an initial 2,000 metres of an anticipated 14,000 metres drill program to further define the geometry of the Scadding Deposit with its newly discovered zones and extensions. The summer program includes a campaign of drill holes targeting a series of folds and hinge zones that host the recently discovered high-grade gold mineralization at Scadding (Figure 1). Groundwork, geophysics and drilling will also continue on the several other regional targets on the large SPJ property.

Quentin Yarie, President and CEO of MacDonald commented, “We are excited to launch into a systematic, district scale exploration program this summer on this recently identified IOCG system – a first in the Wanapitei area. For 2020, we will continue to build on our newly interpreted structural model utilizing modern exploration techniques. We plan to refine and prioritize drilling targets of the high-grade hinge and fold zones at Scadding and expand the model over several new targets on our 18,340 hectares land package.  With an aggressive and fully funded program for 2020/21, we look forward to providing consistent news flow to our shareholders throughout the year.”

A high-resolution IP survey is underway to extend the Company’s previous IP survey around the Scadding Mine and to cover the multiple prospects, beyond Scadding, that were identified by this summer’s prospecting and mapping program (Figure 2).

Results from the Winter/Spring 2020 drilling program combined with the Company’s previous geophysical survey and surface geology identified that the mineralized system at Scadding is controlled by a series of folds. The association between a modified statistical “metal factor” IP response and gold mineralization has been shown to be a valuable tool to target polymetallic gold mineralization in the system.

The initial 2,000 metres of drilling will remain focused on the Scadding Mine area to better define the structures and hinge zones that host high-grade gold mineralization at Scadding. Drilling will target those areas with positive geophysical response in the extensions of the zones that have been shown to host gold mineralization by the Company’s recent drilling (Figure 1). This includes the Monza discovery identified in hole SM-20-046 that is located outside the previously known footprint of the Scadding Deposit. A better understanding of the folded geometry of the zones of mineralization may also result in the extension of the extremely high-grade discoveries in holes SM-19-001 and SM-20-026. Results from this initial phase of drilling swill enable MacDonald to further refine its predictive modeling and select its targeting as it continues exploration beyond the historic Scadding mine footprint.

Once the current IP survey and its interpretation are completed, the Company anticipates the mobilization of a second drill rig to follow up on favourable targets beyond Scadding.

3D IP Survey Details
Abitibi Geophysics, will be using two different survey methods on the SPJ property to identify polymetallic gold mineralization. OreVision®3D can reveal targets at a greater depth than conventional IP without compromising near-surface resolution. The technology enables measurements of large number of dipoles spacings along and across individual survey lines.  These results will then be combined with our borehole information into a 3D interpretation model.

The Distributed Array Systems (DAS) (“DasVision”) method will be utilized in areas of dense overgrowth on the SPJ property since the method doesn’t require any grid lines (no line cutting required).  The DAS method of autonomous receivers offer significant flexibility in dipoles, again resulting in a 3-D inversion of the data.

The Company’s common shares trade on the TSX Venture Exchange under the symbol “BMK”. 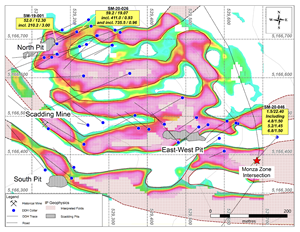 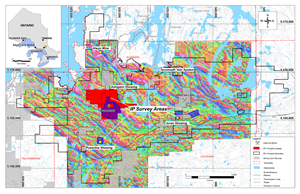