Drilling to date amounts to approximately 29% of the 8,000 metres of drilling planned for this season at two fully funded gold projects

Idaho Champion Gold Mines Canada Inc. (CSE:ITKO)(OTCQB:GLDRF)(FSE:1QB1)(“Champion” or the “Company”), announces an update regarding its 2020 exploration program on both the Baner Gold and past-producing Champagne Gold Projects in Idaho, USA

Champion announces that it has completed six (6) holes totaling 1,045 metres at the past-producing Champagne Gold Project. The completion of hole 6 represents approximately 21% of the total drilling program.

In order to increase efficiencies and data for the maiden drilling program, the Company also announces that it has mobilized a diamond core rig to site to complete the 5,000 metre program (See press release dated: August 19, 2020). 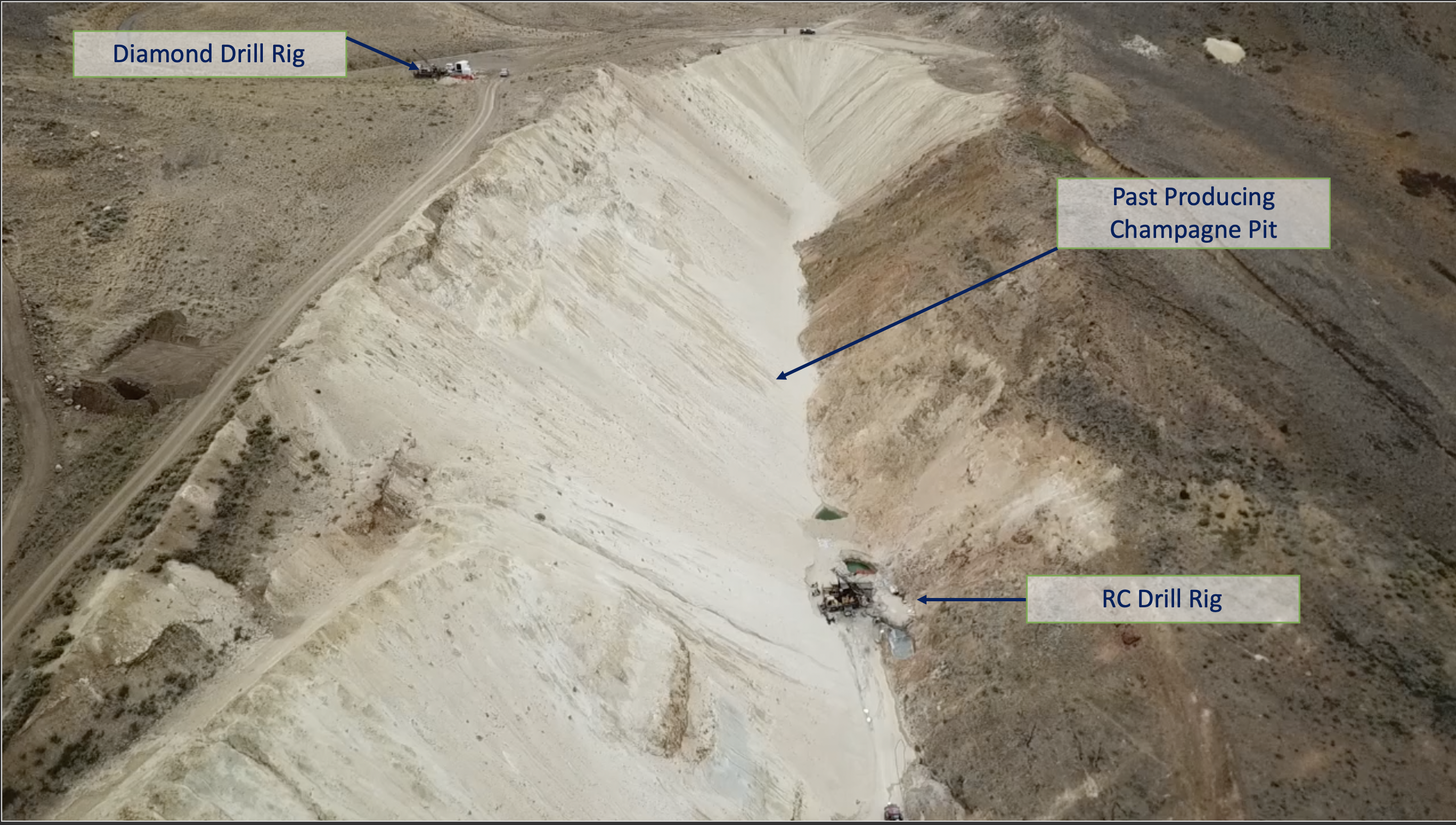 “Drilling targets at Champagne have been identified using historic and newly acquired data which have been previously released,” stated Jonathan Buick, President and CEO. “Ongoing district-wide geologic mapping and review of completed reverse-circulation drill holes have led to recently initiating core drilling to expedite testing and understanding the vuggy silica feeder zones beneath the near-surface cap of gold-silver mineralization mined in the past via several open pits. Precious-metal bearing solutions ascended along steep structural conduits which comprise the principal target objective of the core drilling.”

The Company reports that the drilling program is 43% complete with six (6) holes totaling 1,286 metres being sent to the assay lab. Champion is pleased with the pace of the Baner program since mobilizing the drill rig (See press release dated: September 24, 2020).

President and CEO Jonathan Buick stated further, “Drilling at Baner North is progressing well with the commencement of seventh core hole in the Orogrande Shear Zone. Our geologists tell us that shear zone pyritic mineralization has been encountered.” The 2020 Baner North drill program is a continuation of the 2018 gold discovery drill program on the Baner Gold zone.

About the Champagne Project

The Champagne Mine* was operated by Bema Gold as a heap leach operation on a high sulfidation gold system that occurs in volcanic rocks. Bema Gold drilled 72 shallow reverse circulation holes on the project, which complement drilling and trenching from other previous operators. The property has had no deep drilling or significant modern exploration since the mine closure in early 1992.

Champagne has a near surface cap of gold-silver mineralization emplaced by deep-seated structures that acted as conduits for precious metal rich hydrothermal fluids. Higher grade zones in the Champagne Deposit appear to be related to such feeder zones.

* The Company cautions that the information about the past-producing mine may not be indicative of mineralization on Champion’s property, and if mineralization does occur, that it will occur in sufficient quantity or grade that would result in an economic extraction scenario. The historic data were simply used to evaluate the prospective nature of the property. The Company has not yet conducted sufficient exploration to ascertain if a mineral resource is present on the property.

About the Baner Project

The Baner Project is located within the Orogrande Shear Zone (OSZ), a 20-kilometre long and up to 1-kilometre wide regional shear zone located in Central Idaho. The OSZ is comprised of a series of grabens composed of metamorphosed Proterozoic sedimentary rocks of the Belt Supergroup and granitic rocks of the Cretaceous Idaho Batholith, which

is intruded by Tertiary rhyolites and dacitic dikes. Hydrothermal alteration is spatially associated with the OSZ consisting of: silicification, sericitization, and chloritization. Different types of mineral systems occur in the OSZ and along sympathetic structures in the area, most likely of Cretaceous or Tertiary ages. Mineralization may include disseminated bulk-mineable precious metal mineralization associated with sheeted or stockwork veins, hydraulic breccias and with extensive widespread alteration; but high-grade gold also occurs within discreet structurally controlled quartz veins and silicified zones.

The Baner Project is in the central Idaho Gold Belt, 8 km south of Elk City, Idaho. Elk City is an historic gold mining region dating back to the 1860’s and once supported more than 20 underground mines and extensive placer operations. During the 1930’s there were three cyanide gold mills along Crooked River, which processed open pit and underground sulfide ore. Exploration in the district during the 1980’s and 1990’s was primarily focused on near-surface bulk-tonnage gold potential and included companies such as Cypress-Amax, Kinross Gold, and Bema Gold. Premium Exploration conducted extensive airborne and surface geophysics, soil geochemistry, and drilling around 2010. Currently, in April 2020, Endomines AB, a Nordic gold producer, began mining operations at the Friday Project at Orogrande, which is Idaho’s newest producing gold asset.

The technical information in this press release has been reviewed and approved by Peter Karelse P.Geo., a consultant to the Company, who is a Qualified Person as defined by NI 43-101. Mr. Karelse has more than 30 years of experience in exploration and development.

Idaho Champion is a discovery-focused gold exploration company that is committed to advancing its 100% owned highly prospective mineral properties located in Idaho, United States. The Company’s shares trade on the CSE under the trading symbol “ITKO” and on the OTCQB under the trading symbol “GLDRF”, and on the Frankfurt Stock Exchange under the symbol “1QB1”. Idaho Champion is vested in Idaho with the Baner Project in Idaho County, the Champagne Project located in Butte County near Arco, and four cobalt properties in Lemhi County in the Idaho Cobalt Belt. Idaho Champion strives to be a responsible environmental steward, stakeholder and a contributing citizen to the local communities where it operates. Idaho Champion takes its social license seriously, employing local community members and service providers at its operations whenever possible.

For further information, please visit the Company’s SEDAR profile at www.sedar.com or the Company’s corporate website at www.idahochamp.com.