ALX Resources Corp. is pleased to announce that a prospecting and geological mapping program is underway at its 100%-owned Falcon Nickel Project and its contiguous 100%-owned Gibbons Creek Project located in the northern Athabasca region of Saskatchewan, Canada. Exploration is planned to consist of ground follow-up on historical airborne electromagnetic anomalies present at Falcon and detailed investigation of a …

ALX Resources Corp. (TSXV: AL) (FSE: 6LLN) (OTC: ALXEF) (“ALX” or the “Company”) is pleased to announce that a prospecting and geological mapping program is underway at its 100%-owned Falcon Nickel Project (“Falcon”, or the “Project”) and its contiguous 100%-owned Gibbons Creek Project (“Gibbons Creek”) located in the northern Athabasca region of Saskatchewan, Canada. Exploration is planned to consist of ground follow-up on historical airborne electromagnetic (“EM”) anomalies present at Falcon and detailed investigation of a gold and platinum group elements (“PGE”) showing discovered near Falcon in 2014 by a predecessor company of ALX.

Both the Falcon and Gibbons Creek projects are located near the town of Stony Rapids, SK, which is serviced by an all-weather road from the south, a commercial airport, and seasonal barge service from Lake Athabasca to the west. ALX’s field personnel on site are observing best practices for COVID-19 prevention in order to carry out a safe and successful exploration program.

The highest-priority target areas for the 2020 prospecting program are as follows: 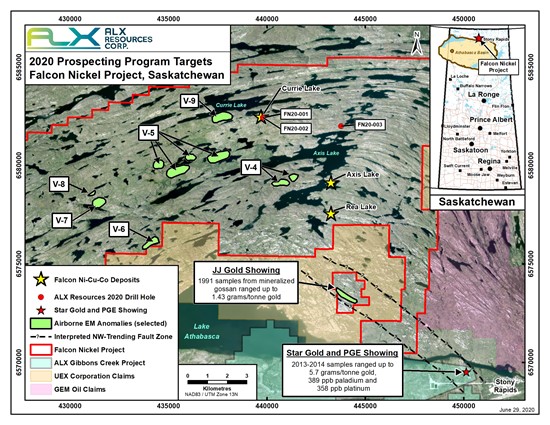 To view an enhanced version of Figure 1, please visit:
https://orders.newsfilecorp.com/files/3046/58700_alx.jpg

Falcon is located within the Tantato Domain, which forms a segment of the Snowbird Tectonic Zone. ALX acquired its claims at Falcon beginning in May 2019 by way of staking and three separate land purchases, bringing the size of the Project to approximately 20,002 hectares (49,427 acres) (see ALX news releases dated June 12, 2019, October 7, 2019 and October 24, 2019). Mobilization is achieved from the town of Stony Rapids, SK, located approximately 18 kilometres by air from the centre of the Project. Stony Rapids is connected to the Saskatchewan highway system by all-weather Highway 905 and has a fully-serviced airport to support both fixed-wing aircraft and helicopters.

Falcon hosts a magmatic nickel sulphide mineralizing system that has been underexplored by modern methods until its acquisition by ALX. A long history of exploration beginning in 1929 discovered numerous nickel-copper-cobalt showings within Falcon’s boundaries, including the Axis Lake deposit, the Rea Lake deposit and the Currie Lake deposit, as well as a gold showing at the JJ target in 1991.

ALX’s first site visit to Falcon in October 2019 focused on the historical Currie Lake deposit area and confirmed grades in surface rock samples of up to 3.17% nickel and 0.40% copper from historical trenches, along with anomalous grades of cobalt, gold and platinum group metals (see ALX news release dated November 20, 2019). Through modern geophysical modeling, ALX subsequently identified highly-prospective targets in three areas that were not defined by historical exploration. Falcon hosts a multitude of other airborne geophysical anomalies that could represent zones of sulphide mineralization. ALX’s ongoing review and interpretation of airborne and ground EM data by geophysical modeling and follow-up ground-truthing has generated a series of new drill targets at Falcon.

ALX’s mandate is to provide shareholders with multiple opportunities for discovery by exploring a portfolio of prospective mineral properties, which include nickel-copper-cobalt, gold and uranium. The Company designs exploration programs using the latest exploration technologies and holds interests in over 200,000 hectares in Saskatchewan, a stable Canadian jurisdiction that demonstrates strong potential for economic base metals deposits, and hosts a producing gold mine as well as the highest-grade uranium mines in the world. ALX has recently acquired the Falcon Nickel and Flying Vee Nickel projects in northern Saskatchewan, the Vixen Gold Project in the historic Red Lake Mining District of Ontario, Canada, and the Draco VMS Project in Norway. ALX is based in Vancouver, BC, Canada and its common shares are listed on the TSX Venture Exchange under the symbol “AL”, on the Frankfurt Stock Exchange under the symbol “6LLN” and in the United States OTC market under the symbol “ALXEF”.

Statements in this document which are not purely historical are forward-looking statements, including any statements regarding beliefs, plans, expectations or intentions regarding the future. Forward-looking statements in this news release include: the Falcon Nickel Project (“Falcon”) is prospective for nickel-copper-cobalt mineralization; the Company’s plans to undertake exploration activities at Falcon, and expend funds on Falcon. It is important to note that the Company’s actual business outcomes and exploration results could differ materially from those in such forward-looking statements. Risks and uncertainties include that ALX may not be able to fully finance exploration at Falcon, including drilling; our initial findings at Falcon may prove to be unworthy of further expenditure; commodity prices may not support exploration expenditures at Falcon; and economic, competitive, governmental, societal, environmental and technological factors may affect the Company’s operations, markets, products and share price. Even if we explore and develop the Falcon project, and even if nickel-copper-cobalt, gold, or other metals or minerals are discovered in quantity, the project may not be commercially viable. Additional risk factors are discussed in the Company’s Management Discussion and Analysis for the Three Months Ended March 31, 2020, which is available under the Company’s SEDAR profile at www.sedar.com. Except as required by law, we will not update these forward-looking statement risk factors.

To view the source version of this press release, please visit https://www.newsfilecorp.com/release/58700