GameSquare Esports Inc. an international gaming and esports company, announced leading sports agency Paradigm Sports, led by Audie Attar, has joined its advisory board. As esports and traditional sports continue to converge, the Paradigm team will bring their deep expertise in traditional sports to drive the accelerated growth of esports. They join an already talented board of advisors which also includes Tony Hawk …

– GameSquare Esports Inc. (CSE: GSQ; FRA: 29Q1), an international gaming and esports company, announced leading sports agency Paradigm Sports, led by Audie Attar, has joined its advisory board. As esports and traditional sports continue to converge, the Paradigm team will bring their deep expertise in traditional sports to drive the accelerated growth of esports. They join an already talented board of advisors which also includes Tony Hawk and Jordan Belfort . 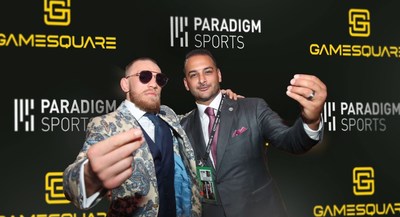 Paradigm Sports is a leading multi-sports representation, business and media platform, home to more than 80 global stars including Conor McGregor , Cris Cyborg, Israel Adesanya , Stephen Thompson , and Jozy Altidore, and has negotiated more than US$650 million in contracts.

“Paradigm Sports is a great company led by incredible people,” said Justin Kenna , CEO of GameSquare. “GameSquare is fortunate to have added the team to our advisor roster who are leading Paradigm Sports with some incredibly innovative work that puts their family of talent at the forefront of business. Their mantra of pushing to do what is best, and most profitable, for their families, their teammates, and their clients resonates strongly with all of us at GameSquare as we are building a global esports organization. I believe that the entrepreneurial spirit and commitment to success that permeates Paradigm’s business is a great fit with GameSquare and mirrors our values.”

Conor McGregor , one of Paradigm Sports’ most notable clients, is the most decorated fighter in the history of the UFC and became the first fighter in UFC history to hold titles in two weight divisions simultaneously. McGregor is the biggest draw in MMA history, boasting an illustrious career that has headlined five of the top six highest selling pay-per-view events. Out of the octagon, McGregor is a sharp businessman and co-founded Proper No. Twelve whiskey with Paradigm Sports before selling a majority stake in the company in April of 2021, among numerous other business ventures.

“I am very excited by Paradigm Sports’ announcement of an advisory board position with GameSquare,” said Conor McGregor . “Both companies are industry leaders, and I believe that esports is the future of the sports world with many athletes, teams and leagues getting involved in the space. I look forward to Audie and the team at Paradigm Sports’ bringing their expertise to collaborate and bridge the gap between traditional sports and the esports world.”

Paradigm Sports’ Founder and CEO Audie Attar said, “As a former executive at FaZe Clan, Justin has the experience to lead what could be the biggest esports organization in the world, and his network is impressive. We could not be more thrilled to be bringing our track record of success to GameSquare as the GameSquare team seeks to take their business to the next level.”

The announcement of Paradigm Sports comes on the heels of Jerry Jones of the Dallas Cowboys and investor John Goff leading GameSquare’s previously announced $17 million financing along with Cowboys CFO Tom Walker and Goff Capital President Travis Goff expected to join the GameSquare Board of Directors. In addition, GameSquare entered a multi-year esports and gaming agency of record agreement with the Dallas Cowboys and acquired Complexity Gaming, which was owned by the Jones Family and Goff Capital. Complexity will continue to operate at The Star in Frisco, TX.