Star Diamond announces that a total of 2,517 diamonds weighing 120.1 carats have been recovered from the first bulk sample trench excavated on the Star kimberlite.

Star Diamond Corporation (“Star Diamond” or the “Corporation”) announces that a total of 2,517 diamonds weighing 120.1 carats have been recovered from the first bulk sample trench (19FALCT001) excavated on the Star Kimberlite. These results are from the first of ten bulk sample trenches that were excavated by Rio Tinto Exploration Canada Inc. (“RTEC”) in 2019 (see News Releases dated June 3, and October 8, 2019). The breakdown of the kimberlite intercepted, and diamonds recovered from trench 19FALCT001, are detailed in Table 1 below. 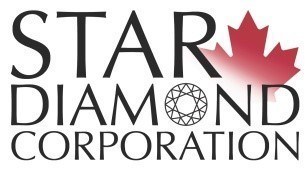 The average diamond grade from this first trench is similar to historical diamond grade results detected from the underground bulk sampling and large diameter drilling (“LDD”) completed on the Star Kimberlite between 2004 and 2009. These results are also similar to the overall weighted average grade (14 cpht) reported in Star Diamond’s Preliminary Economic Assessment (“PEA”) of the Star and Orion South kimberlites (the “Project”) (see News Release dated April 16, 2018).

The three largest diamonds recovered are 3.27, 3.03 and 1.73 carats, respectively, and were all recovered from Early Joli Fou (“EJF”) kimberlite. The EJF is the dominant kimberlite unit within the Project in terms of ore volume and diamond grade. As further referenced below, there are indications that recent diamond breakage has occurred in the diamond parcels recovered from 19FALCT001, suggesting that the extraction and/or processing systems being used by RTEC may be resulting in diamond breakage. Comprehensive diamond breakage studies will be required to assess the nature and extent of the diamond breakage resulting from RTEC’s methods and the possibility that larger diamonds would have been recovered absent such breakage.

Senior Vice President Exploration and Development, George Read, states: “The diamond results from 19FALCT001 provide an early assessment that the trench cutter bulk sampling method has the potential to replicate grades similar to the previous underground bulk sampling and LDD performed by Star Diamond on the Star Kimberlite. Individual EJF kimberlite samples in this first trench exhibit a range of grades (4.88 to 23.34 cpht), which are as expected for the EJF kimberlite.”

To date, kimberlite material from four trenches (19FALCT001, 19FALCT00, 19FALCT003 and 19FALCT010) has been processed by RTEC through the on-site Bulk Sample Plant (“BSP”), with concentrates forwarded to the Saskatchewan Research Council (“SRC”) for final diamond recovery and reporting. Currently, only the diamond results for the first trench have been fully reported to Star Diamond by the SRC. As reporting to Star Diamond on the results from additional trenches is completed, Star Diamond looks forward to providing additional updates. Star Diamond currently expects that all or substantially all of the bulk samples from the ten sample trenches collected during 2019 will be processed by RTEC during calendar 2020, provided that there are not any unexpected material delays in this process including issues arising from COVID-19.

Star Diamond also notes various ongoing issues arising from RTEC’s methods. RTEC is using several technologies that have not, to the Corporation’s knowledge, previously been used in either bulk sample collecting or processing involving similar projects. The purpose of applying these new technologies (including using a Bauer rig to collect bulk samples and using a Tomra XRT machine to improve diamond detection and to reduce the size of the samples sent for final diamond recovery) was to improve the overall diamond grade and reduce diamond breakage. It appears that, to date, the samples being sent to the SRC are much larger in volume than had been initially expected. The sheer volume has caused problems. Further, some coarse (+6-25 millimetre) kimberlite material from the first bulk sample trench (19FALCT001) remains unprocessed by RTEC. The future processing of this potentially diamond bearing material is presently unknown to Star Diamond. As referenced above, an initial diamond examination by the SRC also suggests that some recent diamond breakage has occurred in the diamond parcels recovered from 19FALCT001. Comprehensive diamond breakage studies will be required as part of the assessment of both the extraction and processing systems being used by RTEC and to determine the efficacy and impact of these systems including diamond breakage.

Kimberlite was excavated from the first bulk sample trench (19FALCT001) between 111.0 and 228.4 metres below the surface.  As a result, RTEC sampled and processed some kimberlite units previously assessed by Star Diamond as not contributing to the economics of the Project. The trench cutter has a rectangular profile of 3.250 metres by 1.575 metres (3.200 by 1.525 metres drill tool plus 25 millimetres all round overbreak). The trenches were excavated using a Bauer BC 50 Cutter mounted on a Bauer MC 128 Duty-cycle Crane. Kimberlite excavated by the cutter bit was pumped to the surface in a slurry, and kimberlite fragments between +1.0 and 80.0 millimetres were recovered from the slurry by the Kimberlite Separation Unit (“KSU”). These kimberlite fragments were collected in cubic metre bulk bags and kept in an on-site storage area by RTEC until such time, following a number of delays, as RTEC’s BSP had been assembled and commissioned. Kimberlite heavy mineral concentrates and XRT Accepts produced by the BSP are being delivered by RTEC to the SRC’s Geoanalytical Laboratories located in Saskatoon, Saskatchewan for final diamond recovery.

Star Diamond Corporation is a Canadian based corporation engaged in the acquisition, exploration and development of mineral properties. Shares of the Corporation trade on the Toronto Stock Exchange under the trading symbol “DIAM”. The Corporation’s Fort à la Corne kimberlites (including the Star – Orion South Diamond Project) are located in central Saskatchewan in close proximity to established infrastructure, including paved highways and the electrical power grid, which provide significant advantages for future mine development.

All technical information in this press release has been prepared under the supervision of George Read, Senior Vice-President of Exploration and Development, a registered Professional Geoscientist in the Provinces of Saskatchewan and British Columbia and Mark Shimell, Project Manager, a registered Professional Geoscientist in the Province of Saskatchewan, who are the Corporation’s “Qualified Persons” under the definition of NI 43-101.

This news release contains forward-looking statements as defined by certain securities laws, including the “safe harbour” provisions of Canadian securities legislation and the United States Private Securities Litigation Reform Act of 1995. Forward-looking information is often, but not always, identified by the use of words such as “anticipate”, “believe”, “expect”, “plan”, “intend”, “forecast”, “target”, “project”, “guidance”, “may”, “will”, “should”, “could”, “estimate”, “predict” or similar words suggesting future outcomes or language suggesting an outlook. In particular, statements regarding the Corporation’s future operations, future exploration and development activities or other development plans constitute forward-looking statements. By their nature, statements referring to mineral reserves, mineral resources or PEA constitute forward-looking statements. Forward-looking statements contained or implied in this press release include, but are not limited to, the Corporation’s expectations regarding the processing and analysis of, and reporting of results from, the bulk samples previously collected by RTEC and the timeline for doing so.