Puma Exploration Inc., PUMA-TSXV, is pleased to announce that it will transfer all of its copper assets to its wholly-owned subsidiary Murray Brook Minerals Inc. The objective is to generate maximum value to its shareholders from its base metal projects while Puma Exploration continues to concentrate on its new Flagship Triple Fault Gold Project in New Brunswick, Canada. “The current business arrangement …

Puma Exploration Inc., PUMA-TSXV, (“Puma”) is pleased to announce that it will transfer all of its copper assets to its wholly-owned subsidiary Murray Brook Minerals Inc. The objective is to generate maximum value to its shareholders from its base metal projects while Puma Exploration continues to concentrate on its new Flagship Triple Fault Gold Project in New Brunswick, Canada.

“The current business arrangement represents an important opportunity for Puma’s shareholders to continue to explore and develop the current copper projects within its new subsidiary on which the company has already invested $3,211,057 in exploration (book value as of May 31, 2020) in the last 15 years in Northern New Brunswick”, notes Marcel Robillard, President and CEO of Puma Exploration. “We are expecting renewed interest in the base metals sector, particularly for copper, as green energy metal and EV demands are expected to increase in the coming years. Puma’s subsidiary will be well positioned and ready for any opportunity” added Marcel Robillard.

The newly created strategic advisory board and current management and consultants will evaluate different scenarios to generate maximum value for Puma’s shareholders in light of the current reorganization of Puma’s base metals assets. The reorganization of the copper assets will be effective on August 31,2020. The main copper assets held by the wholly-owned Murray Brook Minerals are as follows:

The Chester Deposit property is known to contain copper deposits containing three (3) zones; the Central Zone, the East Zone, and the West Zone (Copper Stringer) all located near the surface. Only the West Zone was included in the NI 43-101 resources calculation dated 2008 and updated in 2014. The copper deposit has measured and indicated resources of 1,400,000 tonnes grading 1.38% Cu and 3.5 g/t Ag and inferred resources of 2,089,000 tonnes grading 1.26% Cu (assayed for Cu only) as reported in the NI 43-101 Technical Report entitled “Technical Report – Chester Copper Property New Brunswick Canada” (effective March 07, 2014) prepared by Robert C. Sim, P. Geo., for Explor Resources and filed on www.sedar.com.

The Company holds a 100% interest in the Turgeon property consisting of 31 claims over a total surface area of 6.7 km2. The property is located 5 km south of the Belledune deep water port and is accessible by road all year long and is crossed by an electrical transport line.

The Legacy copper project consists of two (2) block of claims which cover an area of about 499.4 ha and are situated in the County of Restigouche, Province of New Brunswick, Canada. The project occurs approximately 100 km west of Bathurst and approximately 40 km from Saint Quentin.

The Legacy Project includes the Legacy deposit, two main prospects (Hornfels Zone and the J.J. Gold Zone) and numerous geophysical targets. The drilling and resource model suggest that the mineralisation continues with depth and that additional tonnage could be delineated with additional drilling. Mineralisation is primarily hosted by silicified calcareous argillite and, to a lesser extent, in skarnified beds and irregular zones within the argillite. The skarns are erratically distributed, but usually occur in proximity to felsic dykes which are generally only weakly mineralised.

This copper mineralization is contained in three, steeply dipping mineralized zones varying from 1.5 m to 12.20 m in width.The steeply dipping zones are confined along strike with a plunge to the NNE of about 50˚. Therefore, they have a pipe-like shape.

To complete its impressive landholdings of advanced projects to be held by Murray Brook Minerals, Puma executed 2 distincts option agreements with a prospector and a private company to secure first priority grassroots targets generated using CARDS system developed by Windfall Geotek (WIN-TSXV). The new properties totalling 101 claims units are located north of the Chester Project and South-East of the East Steel past operating mine. Also, Puma added by staking 63 new claims units in the area to cover favourable geology. These properties will be also transferred into Murray Brook Minerals.

Puma may acquire a 100-per-cent undivided ownership interest in the two (2) distincts properties; Miramichi CARDS and Sevolgle CARDS according to the following terms to each vendor:

Issuing a cumulative amount of 500,000 shares of Puma and $75,000 cash payments to the owners, according to the following schedule:

The owners will retain a two percent net smelter return royalty on any saleable production from the property. Fifty percent of the NSR royalty (that is, one percent) may be purchased by Puma for $1-million. Puma retains a right of first refusal on the remaining one percent NSR royalty that is held by the owners. The transaction is subject to the TSX Venture Exchange approval.

Following Puma’s announcement made on August 4, 2020, about the repricing of certain warrants, and the initial review by the TSX Venture Exchange. The company intends to reprice 6,185,478 warrants to $0.20 according the certain modifications requested by the exchange as set out below.

Under the terms of the December 2018 financing, 638,000 warrants were issued at $1.00 (post-consolidation) with an expiry date of December 31, 2020. The company intends to reprice these warrants to $0.20. In accordance with the TSX Venture Exchange Policy 4.1 (section 3.3a) ii) and e)), the warrants will be subject to an acceleration clause: “should the closing price of the common shares of the Company on the TSX Venture Exchange be $0.25 or higher for ten (10) consecutive trading days, the Company must accelerate the expiry of the Warrants to the date that is 30 days from the date of the issuance of a news release by the Company announcing the exercise of the acceleration right.” The Company has received the consent of the warrants holders to proceed with the proposed modification.

Under the terms of the December 2019 financing, 1,342,500 warrants were issued at $0.35 expiring in December 2021. The Company will now proceed to reprice these warrants to $0.20 as no comment was received for these warrants.

Marcel Robillard, PGeo, qualified person as defined by Canadian National Instrument 43-101 standards, has reviewed and approved the geological information reported in this news release. Neither TSX Venture Exchange nor its Regulation Services Provider (as that term is defined in the policies of the TSX Venture Exchange) accepts responsibility for the adequacy or accuracy of this release.

Puma Exploration is a Canadian-based mineral exploration company with precious and base metals projects in early to advanced stages located in the Famous Bathurst Mining Camp (BMC) in New Brunswick, Canada. Puma is currently focusing his field work on its flagship TRIPLE FAULT GOLD PROJECT in New Brunswick. Great efforts will be made by the Company in the coming years to deploy its DEAR strategy (Development, Exploration, Acquisition and Royalties) in order to generate maximum value for shareholders with low shares dilution.

You can visit us on Facebook / Twitter / LinkedIn
Learn more by consulting www.pumaexploration.com for further information on Puma.

A photo accompanying this announcement is available at https://www.globenewswire.com/NewsRoom/AttachmentNg/e86c9724-f27e-4ea9-8342-1cfa3ee39124 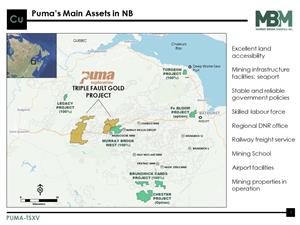