“It is very encouraging to see the abundance of rusty quartz boulders occurring along an inferred mineralized trend over a length now of approximately 3.8 km. Open ground approximately 1 km northeast along the mineralized trend from the cluster of the rusty quartz boulders found were staked and we decided to increase the property to secure the highly prospective trend, but also over the entire land package,’’ notes Marcel Robillard, President, CEO of Puma Exploration.

Puma is undertaking a non-brokered private placement of units, for a maximum of $450,000. Pursuant to the placement, Puma is offering a maximum of 4.5 million units at a price of 10 cents per unit. Each Unit is comprised of one (1) flow-through common share (a “Flow-Through Common Share”) and one half (1/2) common share purchase warrant (each whole warrant, a “Warrant”), each Warrant entitling the holder to purchase an additional common share (a “Warrant Share”) at an exercise price of $0.15 per Warrant Share for a period of twenty-four (24) months following the Closing Date.

The company will use the proceeds of the offering for the exploration program currently in progress on the Triple Fault Gold Project. The shares and warrants issued under the offering will be subject to a holding period of four (4) months and one day following the closing.

The Triple Fault Gold Project includes four (4) properties named Williams Brook Gold, Jonpol Gold, Rocky Brook, and Portage Lake and controls more than 25,000ha of favorable gold exploration. There are many gold occurrences and float with up-to 50.8 g/t Au, 40 g/t Au, 28 g/t Au, 17 g/t Au and previous holes intersected 11.2 g/t over 2.8m, 8.02 g/t Au over 1.0m, 1.0 g/t over 23.0m, 3.46 g/t Au over 2.0m. There has been very limited drilling and exploration in the area with excellent access by the paved Route 180 close to the mining camp infrastructure. The Dunnage Zone hosts major gold deposits and gold occurrences in siluro-devonian host rocks with the emergence of many companies in Eastern Canada for gold exploration and development.

Marcel Robillard, PGeo, qualified person as defined by Canadian National Instrument 43-101 standards, has reviewed and approved the geological information reported in this news release. Neither TSX Venture Exchange nor its Regulation Services Provider (as that term is defined in the policies of the TSX Venture Exchange) accepts responsibility for the adequacy or accuracy of this release.

Puma Exploration is a Canadian-based mineral exploration company with precious and base metals projects in early to advanced stages located in the Famous Bathurst Mining Camp (BMC) in New Brunswick, Canada. Great efforts will be made by the Company in the coming years to deploy its DEAR strategy (Development, Exploration, Acquisition and Royalties) in order to generate maximum value for shareholders with low shares dilution.

You can visit us on Facebook / Twitter / LinkedIn
Learn more by consulting www.pumaexploration.com for further information on Puma.
Marcel Robillard, President

A photo accompanying this announcement is available at https://www.globenewswire.com/NewsRoom/AttachmentNg/1a198fce-9b7a-460c-a2ec-cc98911c251e 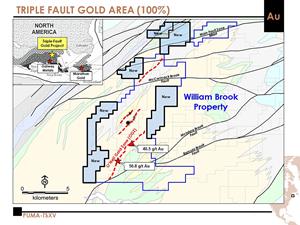