TORONTO, April 22, 2021 (GLOBE NEWSWIRE) — Nobel29 Resources Corp. (TSX-V: NBLC) (the “Company” or “Nobel29”) announces results of channel sampling at surface and underground from its Algarrobo Iron Oxide copper-gold project (the “Project”) in Chile (Figure 1 – Location Map). The Company has completed an extensive chip-channel sampling program on underground and surface exposures of mineralization at its Algarrobo copper gold project in advance of its drill program. A total of 133 chip/channel samples were collected from the existing workings as well as trenches and surfaces exposures. The mineralization is typically characterized by very high grade veins ranging from 0.5 to 5 meters thick with mineralized wall rock adjacent that commonly has copper grades that can vary from 0.8% to 5% copper where they can sampled. The mining has been geared to high grade, small scale production for direct shipping +12% copper ore to the Enami smelter 45 km south in the city of Copiapo, and as such the narrow working generally do not expose the entire width of the mineralized wall rock as it does not meet the direct shipping cutoff grade. A complete list of the samples and results is included below. Additional information in respect of the Algarrobo Project can be found the Company’s technical report prepared by Richard T. Walker, M.Sc., P. Geo. and Enrique Grez Armanet, B.Sc., P. Geo. titled “NI 43-101 Technical Report Algarrobo Property III Region, Chile at 27° 02’ 34’ E Latitude, 70° 33’ 52’ Longitude” with an effective date of February 28, 2021, which has been filed on SEDAR (www.sedar.com) (the “Technical Report”).

Diamond drilling and ground magnetic surveys have commenced on the Project and results will be announced as they become available. According to David Gower, P.Geo., CEO, “We are incredibly excited to commence the work to delineate the resources on this Project. It’s very rare to see copper grades as high as we see on this Project. This is a large mineralized system that extends for at least 6 kilometers along strike based on the historical workings in the area and sampling done by Nobel29 geologists. Having recently closed a capital raising of approximately $9 million that was escrowed until trading commenced this week, the Company is well financed to execute on a major drill campaign at Algarrobo.”

Figure 2: Map of the northeast part of the Property showing the numerous major mineralized structures sampled by Nobel29 and from which production has occurred. The area with the historical and current mine workings is concentrated in the northeaster quadrant of the Property extending approximately six km along strike in a southwesterly direction. The numbers beside certain of the sample site refer to copper values in % from the high grade vein systems. The inset map showing the Gloria Vein occurs 3 km southwest along the trend and off the map.

Rock chip samples were acquired perpendicular to the mineralized structures in a strip 20 cm wide and 2 to 3 cm deep. Samples were an average of approximately 1.0 m in length, not less than 0.4 m in length and range up to 3 meters in length. In exceptional cases, samples of less than 0.20 m were taken. Approximately 130 linear m of variably mineralized veins and structures were sampled. Sections to be sampled were selected and marked with paint by the supervising Geologist according to the mineralization characteristics of the different units and considering their contact relationships. Samples of the wall rock were taken adjacent to the mineralized veins, however sampling did not cross the lithological boundary. A total of 133 samples, approximately 3.5 kg each, were collected, with 26 samples inserted for Quality control (16.35% of the total samples analyzed), including duplicates (5.03%), reference material (standards 6.29%) and sterile samples (blanks 5.03%). Samples were bagged, labeled and submitted to ALS Global Laboratory for assay. Samples were prepared according to a standard, resulting in pulps with 85% at <75 μm. Subsequent to analysis, remaining pulp were received in Kraft envelopes for each sample, duly labeled, packed in boxes and stored in the Project warehouse in Caldera. For further information please refer to pages 79 and 80 of the Technical Report.

The Company has granted a total of 1,550,000 stock options to various directors and officers pursuant to its stock option plan. The options may be exercised at a price of $0.64 per option for a period of five years from the date of grant. The grant of options remains subject to the approval of the TSX Venture Exchange.

The scientific and technical information in this news release has been reviewed and approved by Mr. Vernon Arseneau, P.Geo, and Mr. David Gower P.Geo., Qualified Persons as defined by National Instrument 43-101 of the Canadian Securities Administrators.

Location of the Algarrobo IOCG Project. 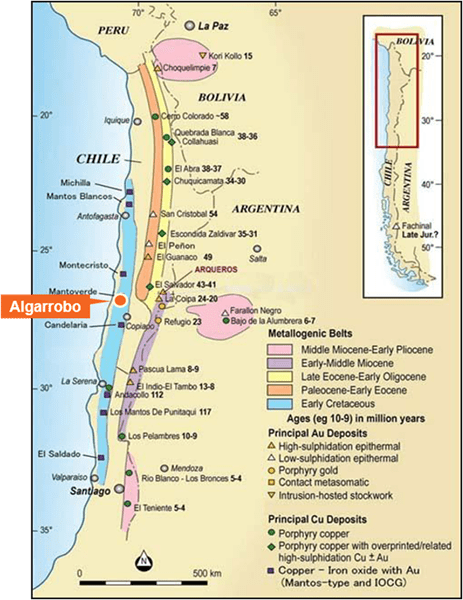 Map of the northeast part of the Property showing the numerous major mineralized structures sampled by Nobel29 and from which production has occurred. The area with the historical and current mine workings is concentrated in the northeaster quadrant of the Property extending approximately six km along strike in a southwesterly direction. The numbers beside certain of the sample site refer to copper values in % from the high grade vein systems. The inset map showing the Gloria Vein occurs 3 km southwest along the trend and off the map. 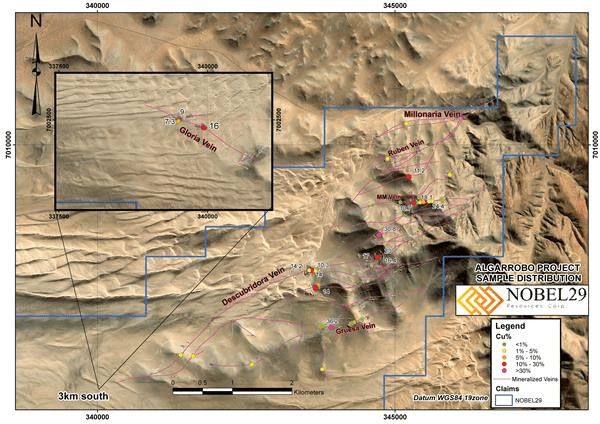