First Cobalt Corp. today announced that it is undertaking an internal review of its silver projects in Ontario, Canada, with a view towards value creation for shareholders by potentially spinning out, divesting, or joint-venturing these non-core assets in what is a greatly improved silver market.

First Cobalt Corp. (TSXV:FCC) (OTCQX: FTSSF) (the “Company”) today announced that it is undertaking an internal review of its silver projects in Ontario, Canada, with a view towards value creation for shareholders by potentially spinning out, divesting, or joint-venturing these non-core assets in what is a greatly improved silver market.

Silver prices have more than doubled from their March lows and are up more than 65% year-over-year due to investor interest in precious metals. We have several high-grade silver targets that are not receiving value in our asset portfolio given our focus on cobalt. The Cobalt Camp includes some of the highest-grade historic silver mines in Canada and First Cobalt has demonstrated that potential for new silver discoveries exists beyond historically mined areas.

Due to unsolicited expressions of interest, we have started a review of non-core silver assets. The Kerr Lake area is a prime example given that First Cobalt has combined eight adjacent historic mines that produced 50 million ounces more than 60 years ago. We may seek to divest of silver-rich assets or joint venture them if terms are attractive.

In light of a strong silver market, the Company has received inquiries about its silver assets and management has commenced a review of opportunities to create value from non-core portfolio holdings.

In 2017, First Cobalt consolidated an extensive land package totaling more than 10,000 hectares of patented land and mineral claims in the Cobalt Camp in Ontario, Canada that includes 50 past producing mines. The Company completed a $10 million exploration program including historic data compilation, bedrock mapping, prospecting, geophysical surveys and more than 30,000 metres of drilling across 14 separate sites (Figure 1). In many locations, high grade silver was intersected but not followed up due to a focus on targets with higher cobalt mineralization.

First Cobalt had some of its best silver intercepts in the Kerr Lake area, which encompasses eight historic silver mines: Crown Reserve, Kerr Lake, Lawson, Drummond, Conisil, Hargrave, Silver Leaf, and Bailey. These mines produced over 50 million ounces of silver and 900,000 pounds of cobalt, mainly between 1905 to 1950. The deepest shaft was less than 200 metres.

Nearby, Silverfields was mined by Teck until 1989 to a depth of 300 metres, producing over 17 million ounces of silver, demonstrating the depth potential to some mineralized systems.

The Kerr Lake-Crown Reserve trend occurs as a network of closely-spaced veins in various orientations over a 500 metre strike extent. Mineralization is at or near surface with two dominant mineralization trends developed along a major structural corridor. Drilling at Crown Reserve and Kerr intersected unmined vein mineralization beyond historic underground workings. Several holes were drilled at Drummond revealing flat-lying silver and cobalt mineralization over a 300 metre by 200 metre tabular-shaped area, unmined due to the relatively high cobalt content.

The Kerr #2 trend is 400 metres south and roughly parallel to the Kerr Lake-Crown Reserve trend. This mineralized zone was previously unknown and extends for more than 350 metres. The zone appears to be a continuous polymetallic network of veins and disseminated mineralization where silver is dominant and is associated with cobalt, copper, lead and zinc. Results demonstrate an ideal structural setting for the development of a closely-spaced vein network in the Kerr Lake area.

In the southern portion of the Cobalt Camp, new zones of silver mineralization were also intersected outside of the historic Frontier and Keeley mines that produced over 19 million ounces of silver. New veins 200 metres west of the Keeley Mine were discovered at an area known as Keeley South, which were not followed down-dip to where vein systems are typically better developed. Near the margins of the Keeley Mine workings, a series of small veins and fractures contain silver that were not mined.

In light of these results, follow-up exploration is warranted to expand the silver potential in these areas. The Cobalt Camp was primarily mined for silver from 1904 to 1989, with peak production occurring from 1919-1931. Over 600 million ounces of silver and 50 million pounds of cobalt were produced from approximately 104 different mining operations. 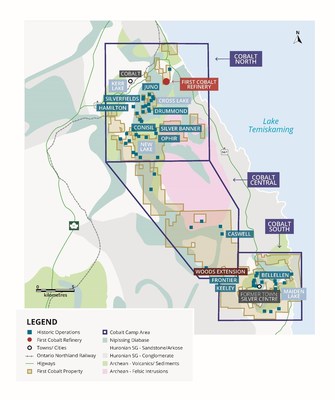 Figure 1. First Cobalt property in proximity to the town of Cobalt (north) and the former town of Silver Centre (south), as well as rail, regional highway, and the First Cobalt Refinery. Place names refer to areas recently explored and targeted by drilling.

Drilling lengths are as recorded downhole and do not necessarily represent true widths of mineralization as multiple vein orientations have been intersected. For a table of drill hole locations and assay results to date, visit https://www.firstcobalt.com/_resources/pdf/Cobalt-ON-Silver-Assays.pdf.

First Cobalt has implemented a quality control program to comply with common industry best practices for sampling and analysis. Samples are collected from drill core from a range of 30 to 100cm length. Half-core samples are submitted for analysis. Standards and blanks are inserted every 20 samples. Duplicates are made from quarter core splits every 20 samples. First Cobalt utilizes high quality laboratory services from AGAT Laboratories in Mississauga, Ontario, Canada, ALS Laboratory in Vancouver, BC, and SGS Minerals Lab in Lakefield, Ontario. All results reported have passed QA/QC protocols. Total digestion and ICP finish are used for analyses on all samples. High silver values (>20 g/t) are determined by a separate acid digestion and ICP finish.

The information in this release was reviewed and prepared under the direction of Dr. Frank Santaguida, P.Geo., Vice President of Exploration for First Cobalt, who is a qualified person as defined by National Instruments 43-101.

First Cobalt owns North America’s only permitted cobalt refinery. Cobalt refining is a critical component in the development and manufacturing of batteries for electric vehicles and forms a foundational piece of the next generation of the North American auto sector and other electrified consumer and industrial applications. First Cobalt also owns a cobalt project in the United States and controls significant silver and cobalt assets in the Canadian Cobalt Camp, including more than 50 past producing mines.